In order to score well in their board exams, students should be thorough with their topics included in the curriculum. They should allocate enough time to revise every subject. These previous year papers of Bihar Board Class 10 Science will help students to get an overview of the real question paper. We at BYJU’S have provided solutions of the Class 10 Science question paper of 2019 and students can refer it while cross-checking. These solutions are solved by subject experts with correct explanation and examples. 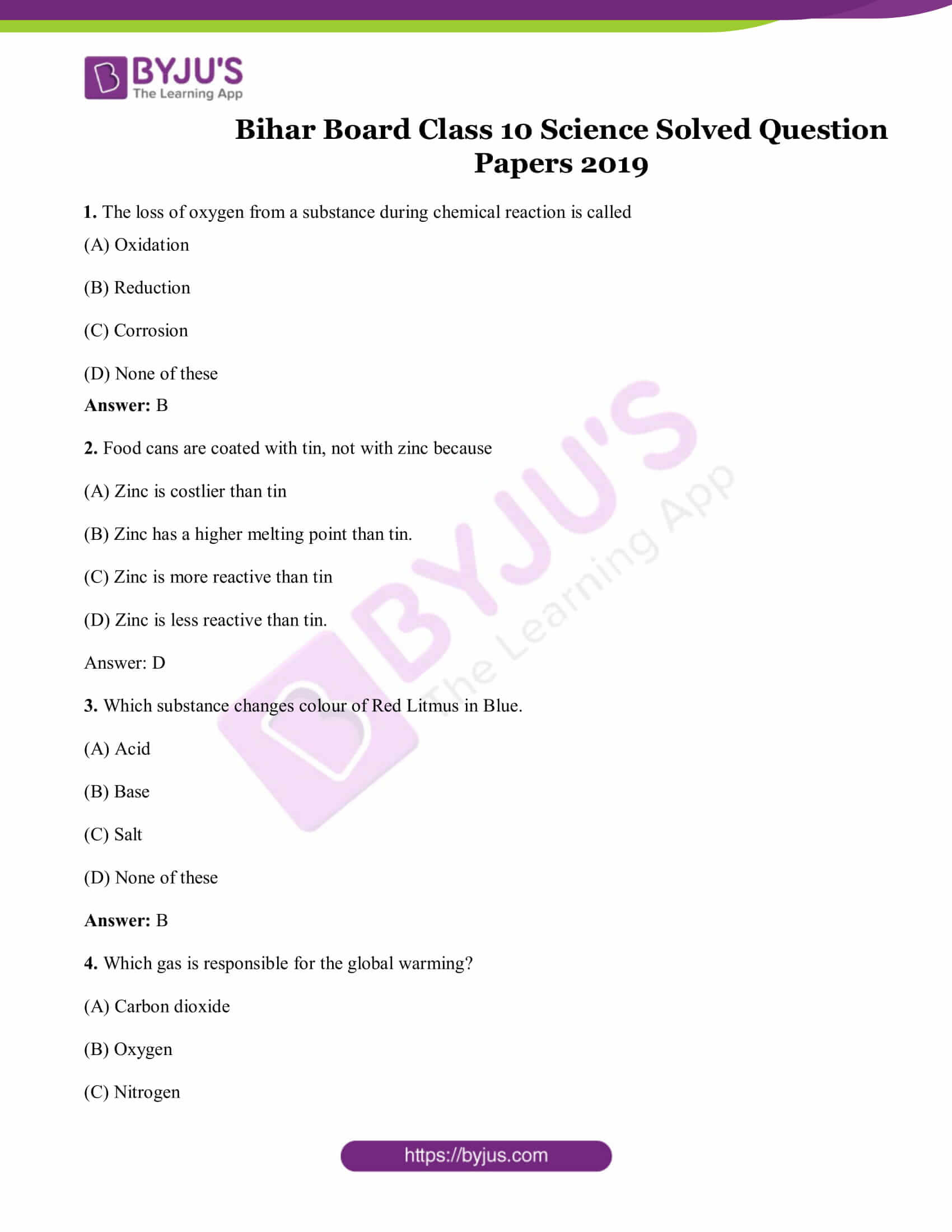 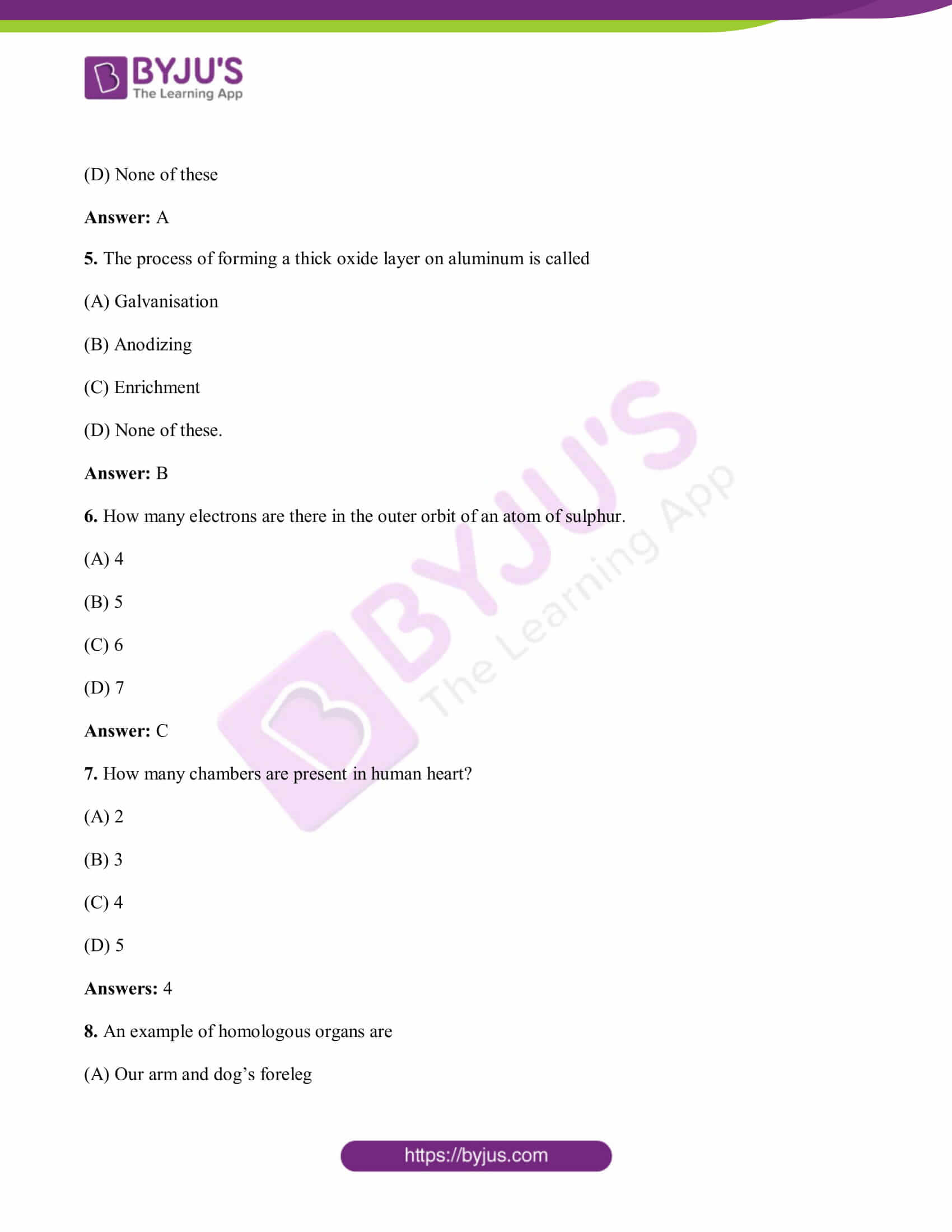 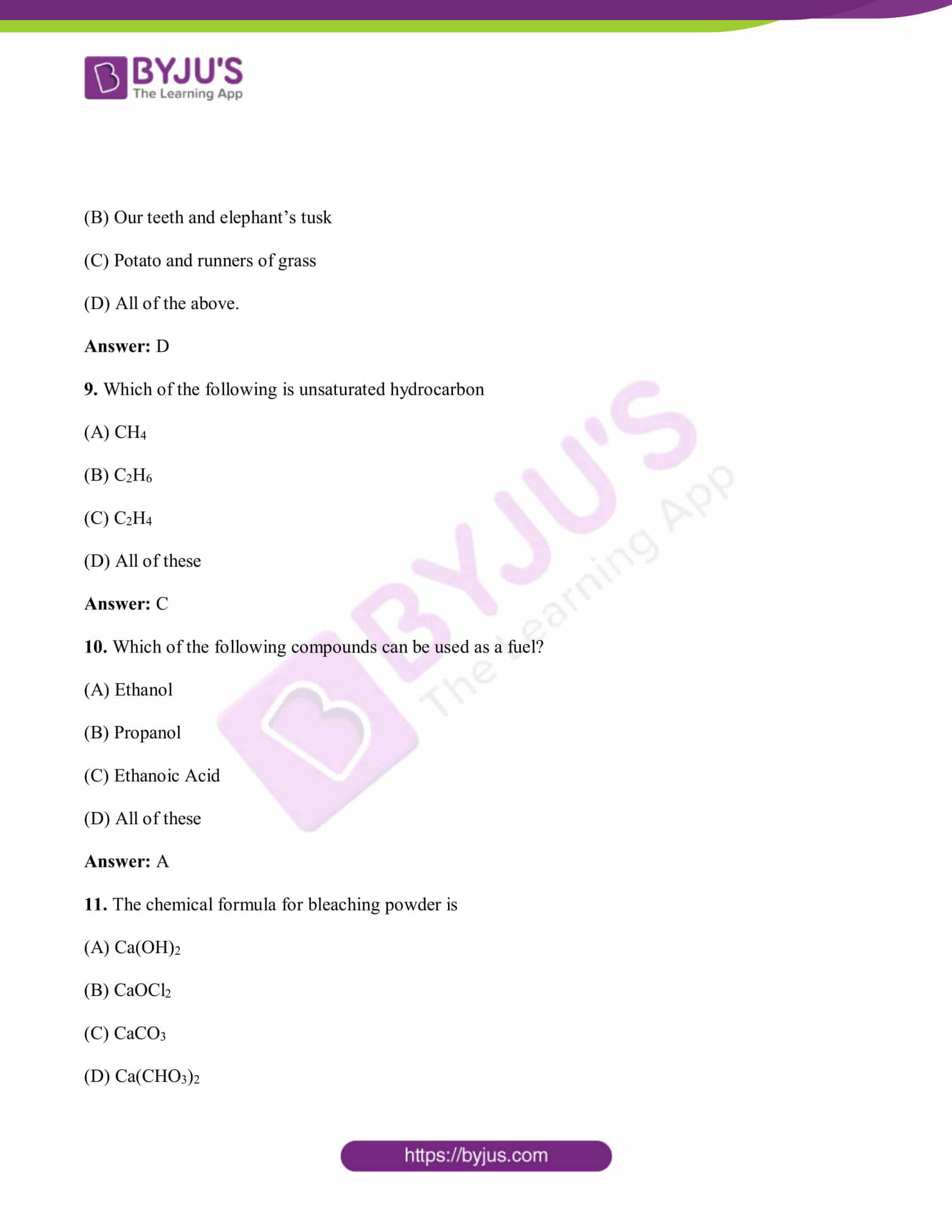 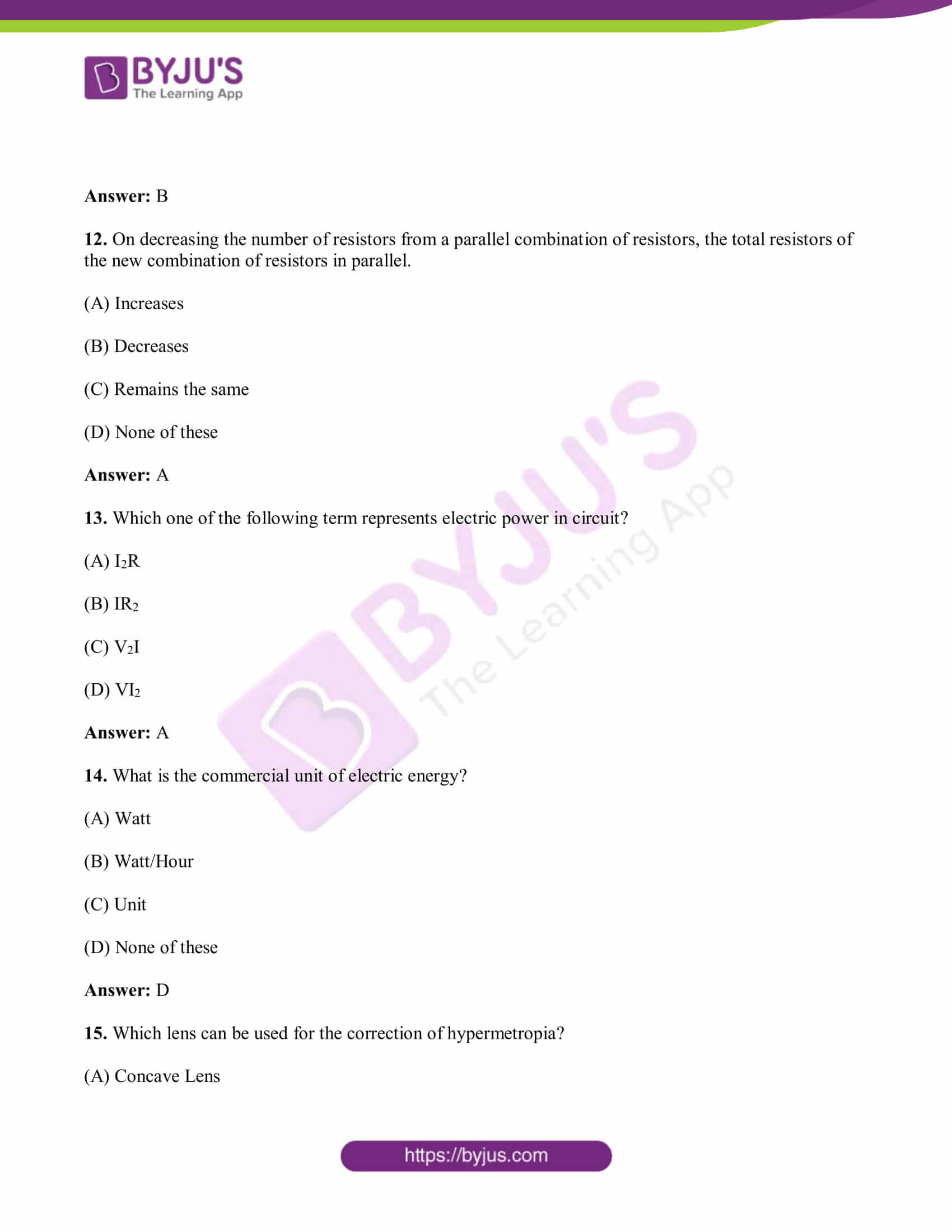 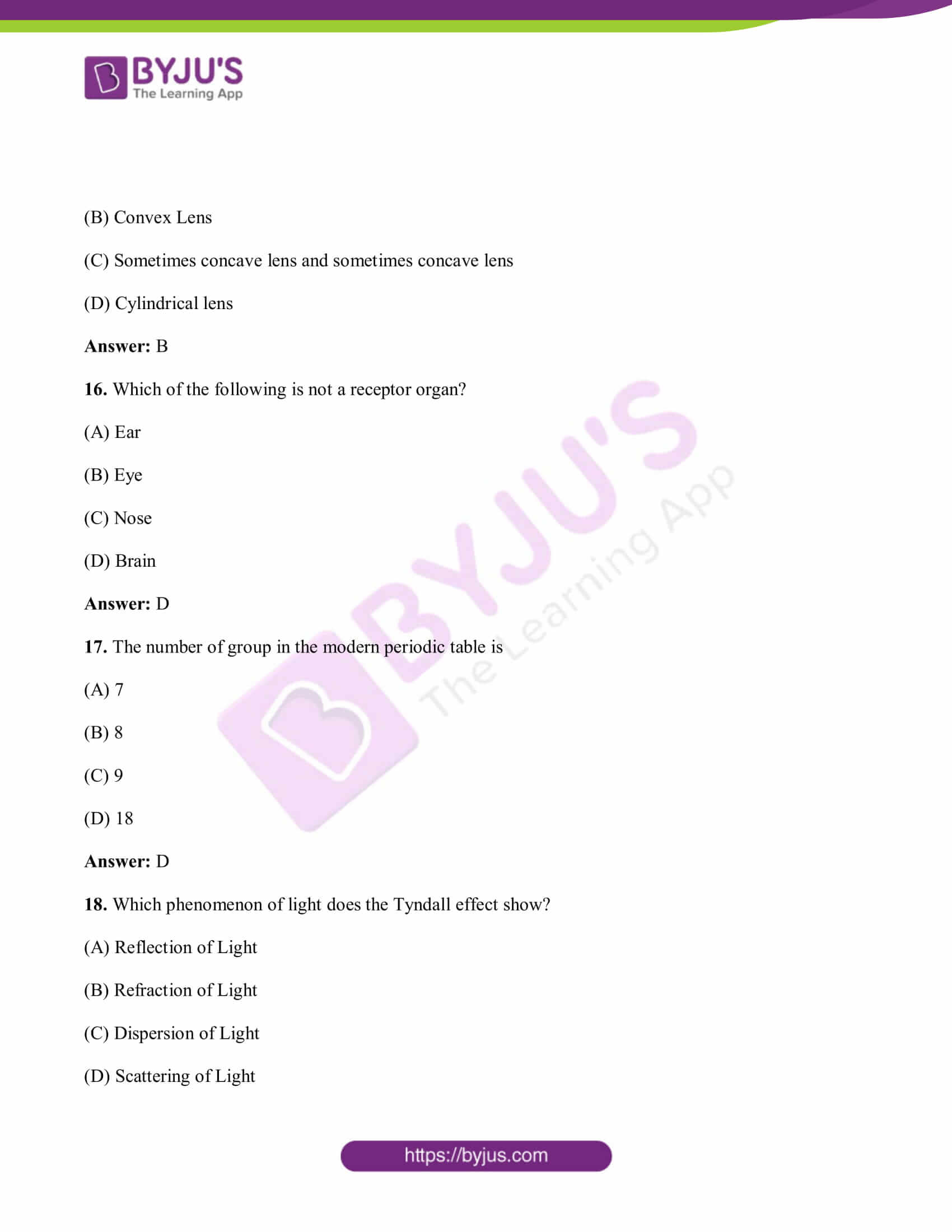 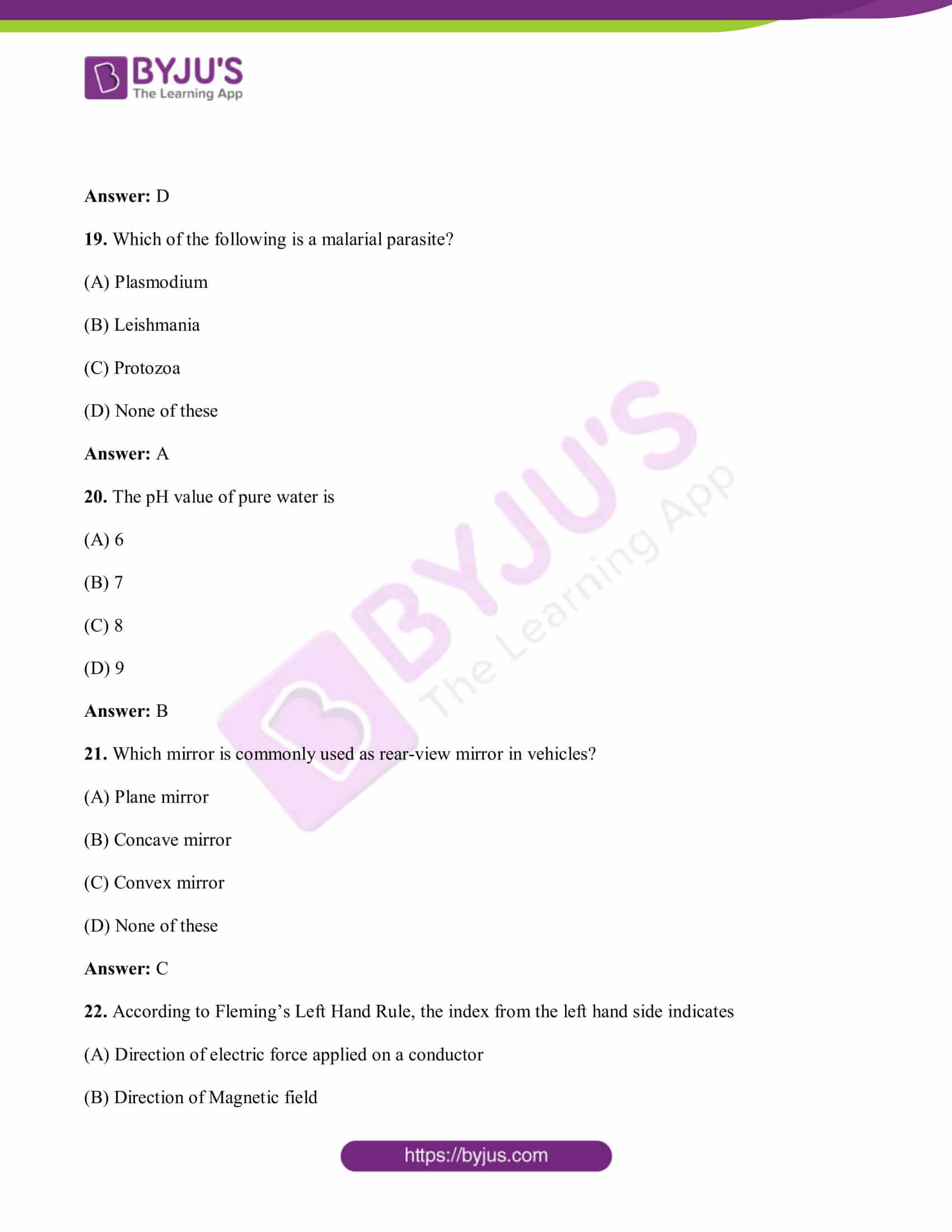 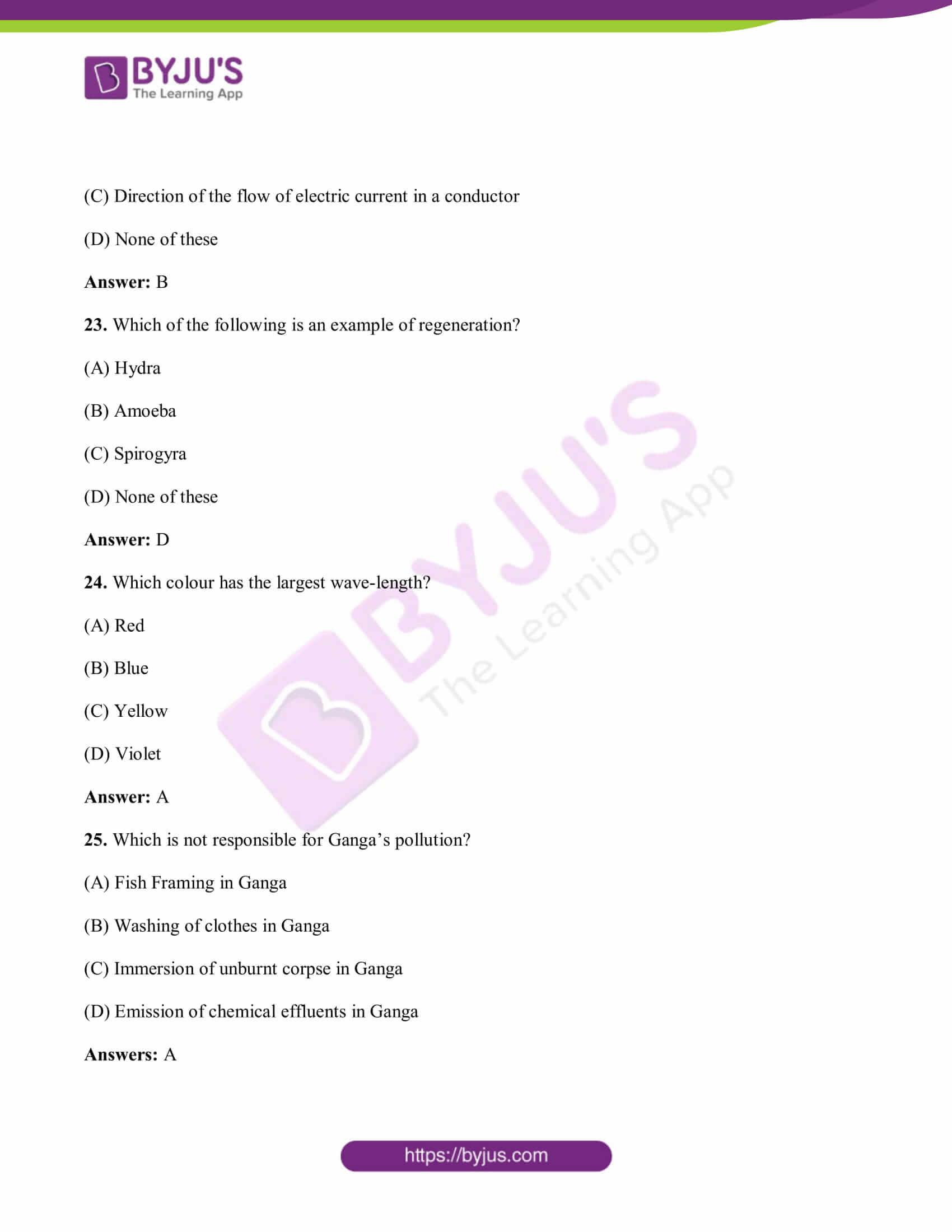 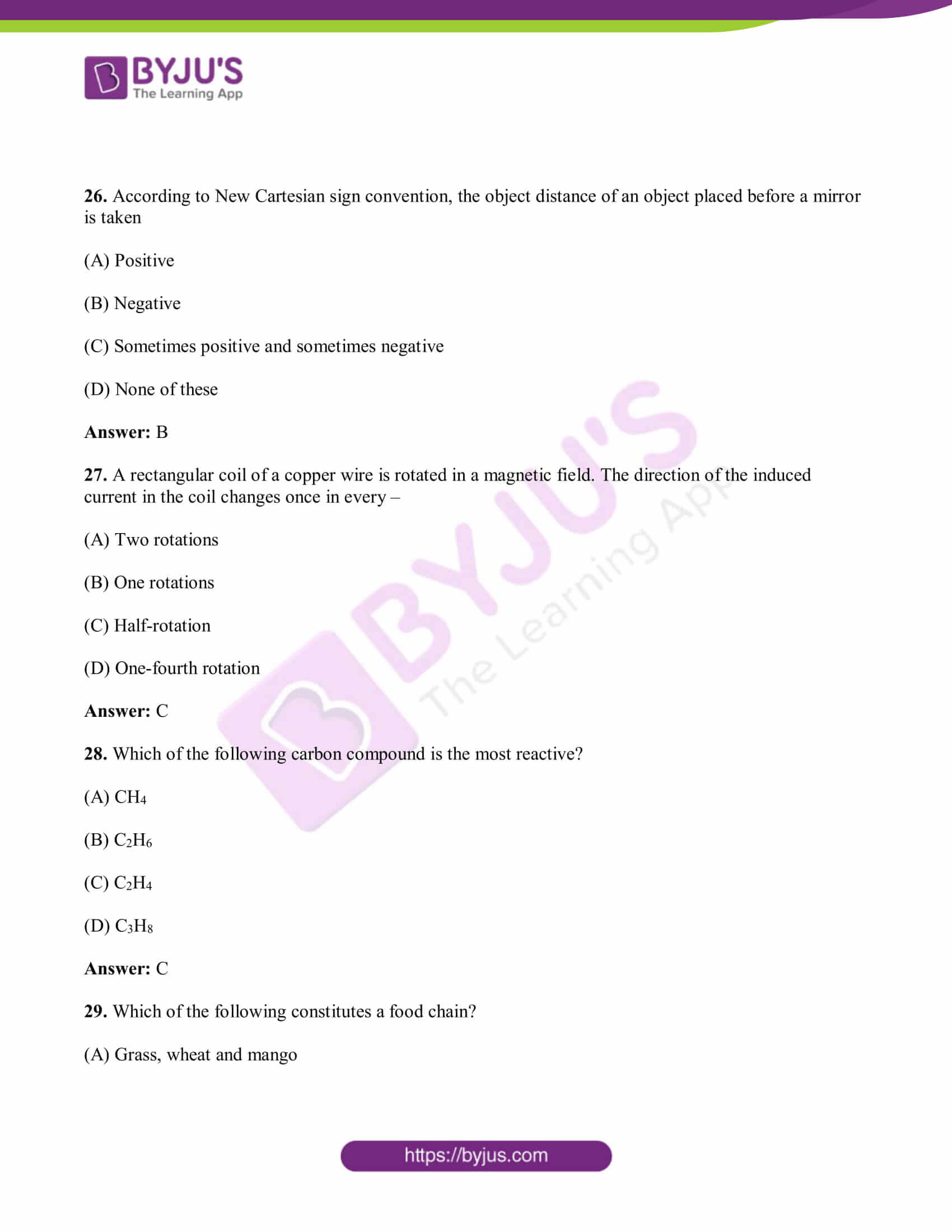 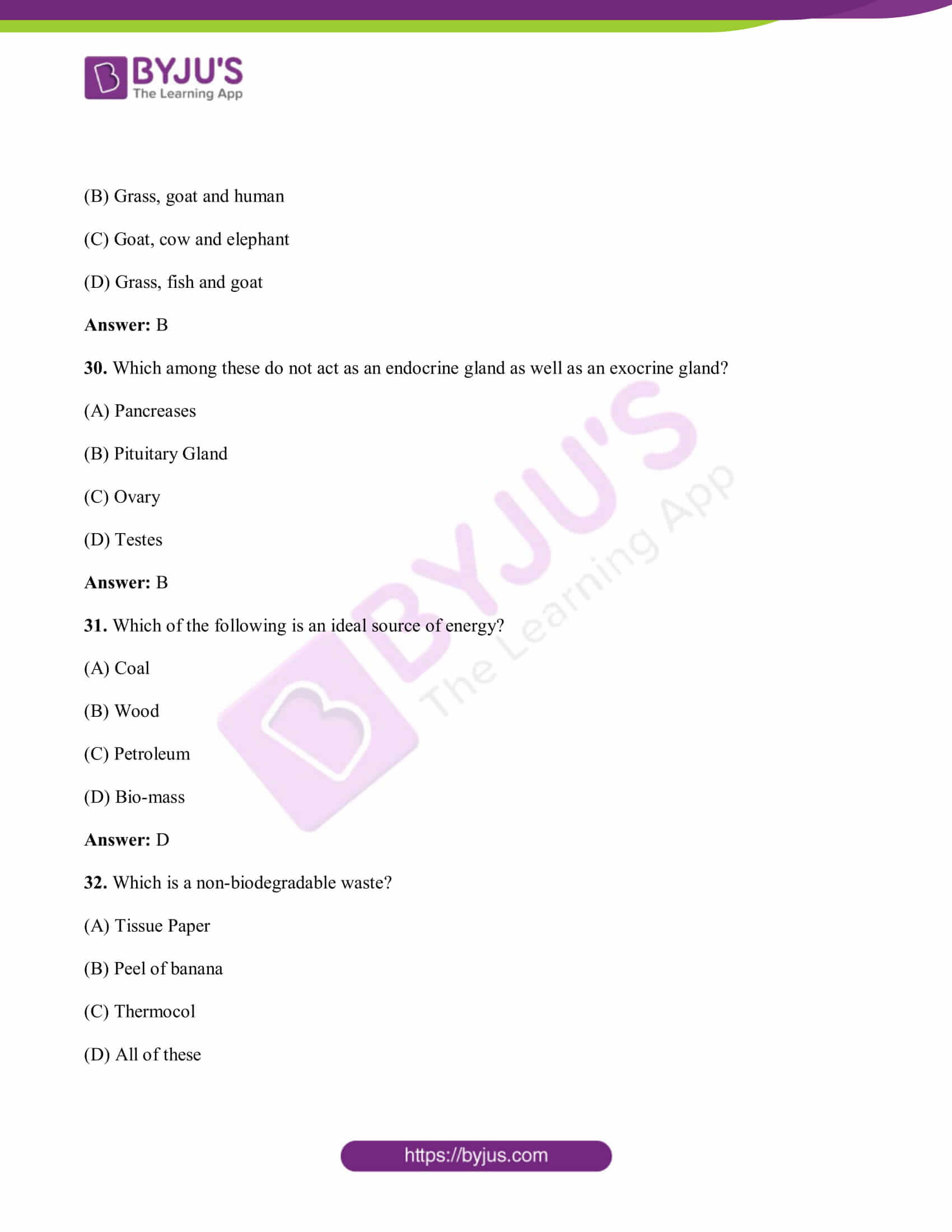 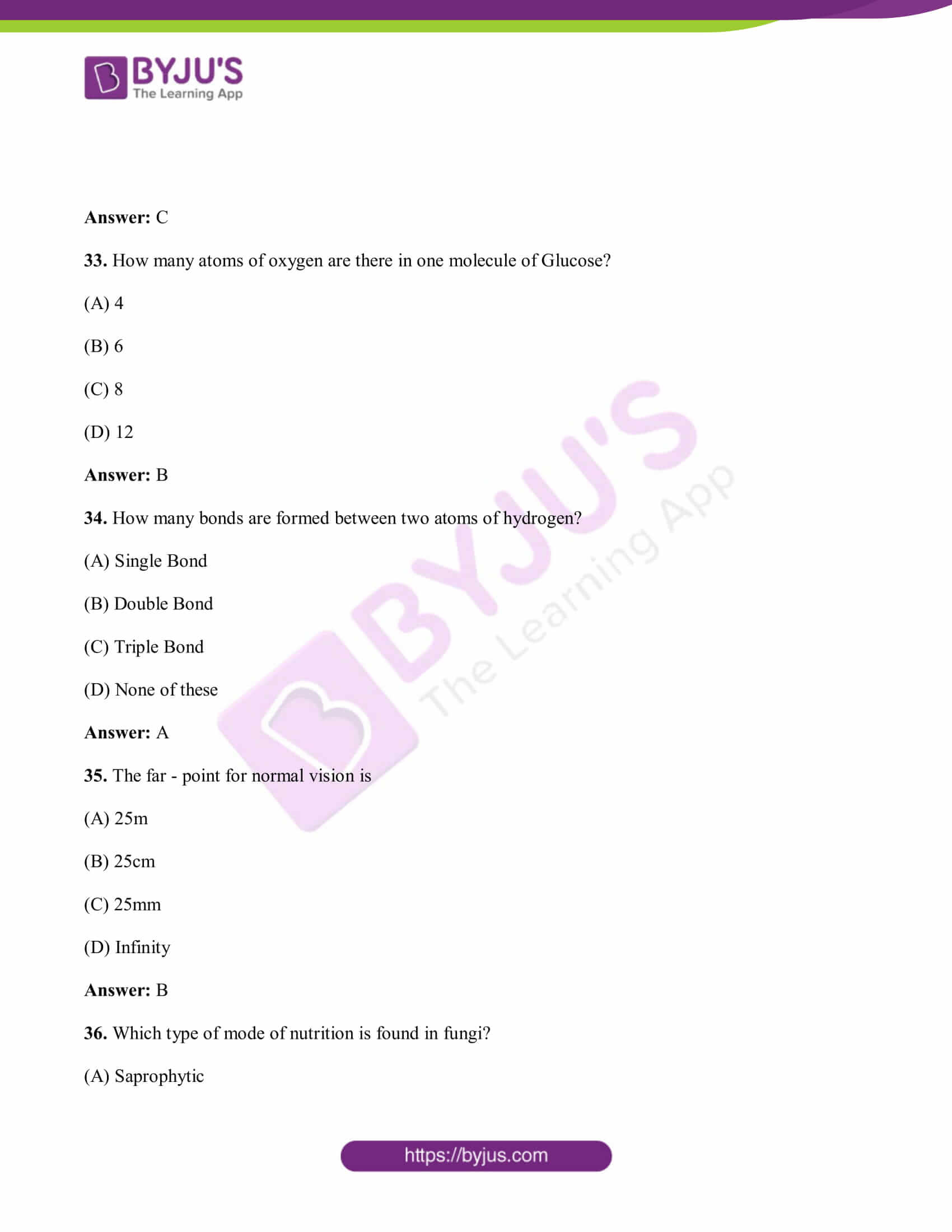 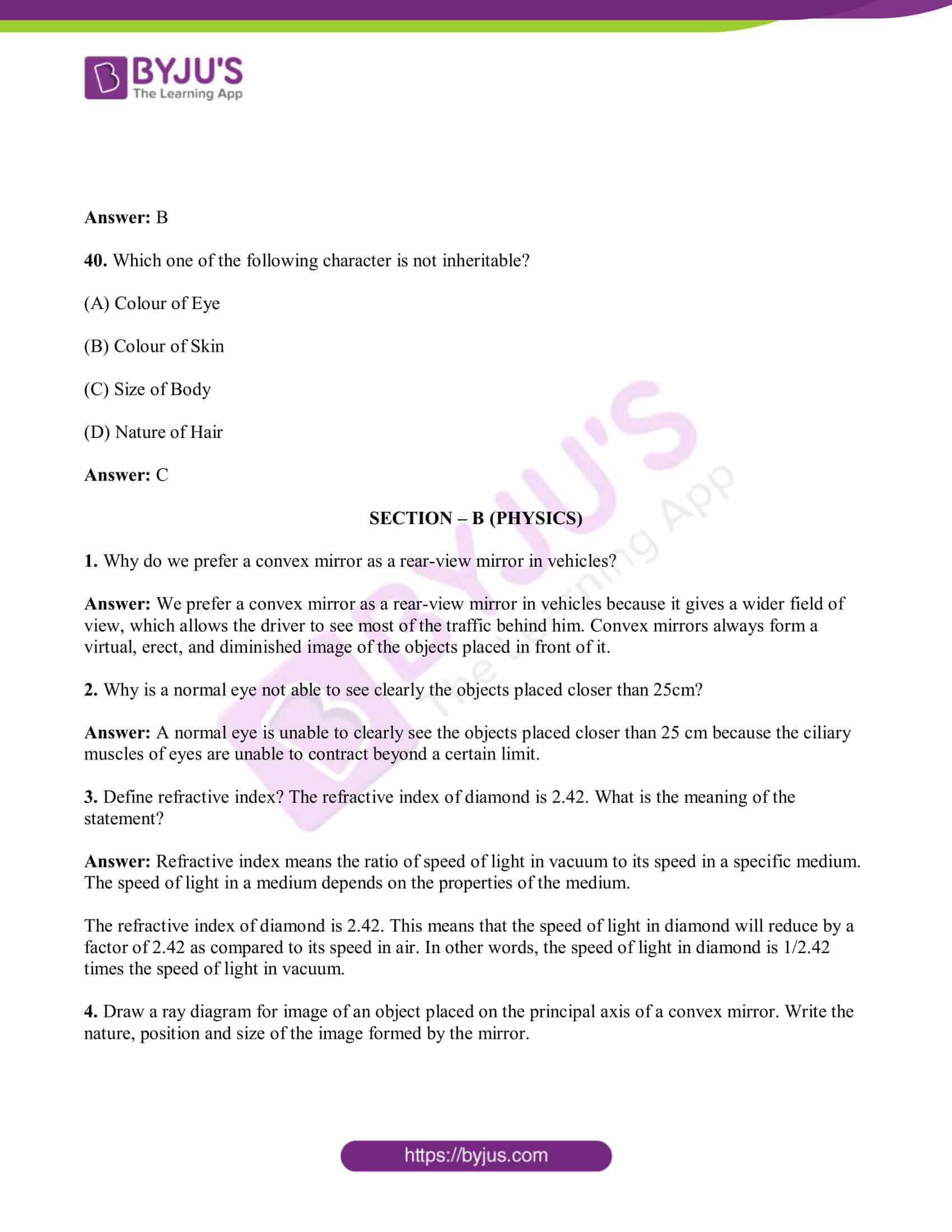 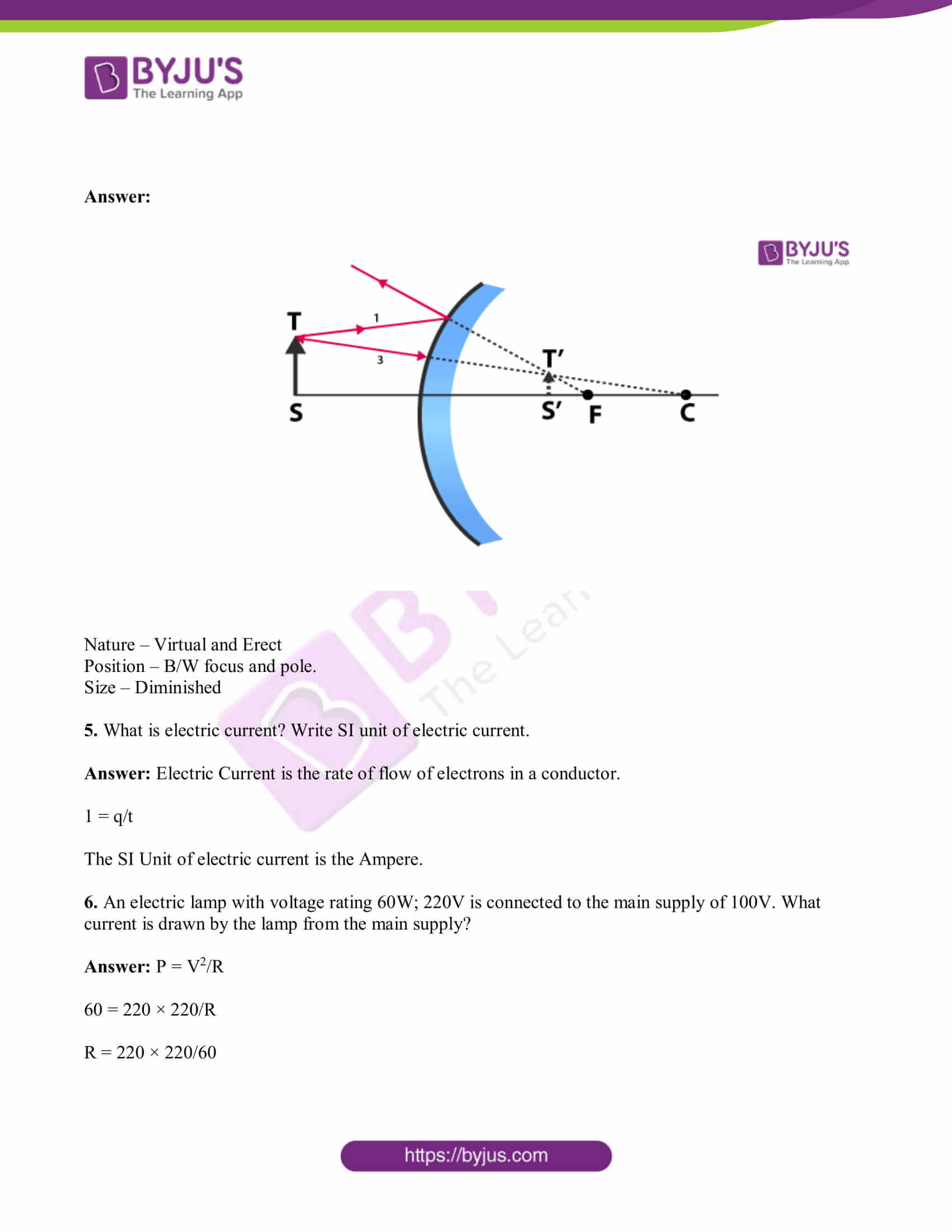 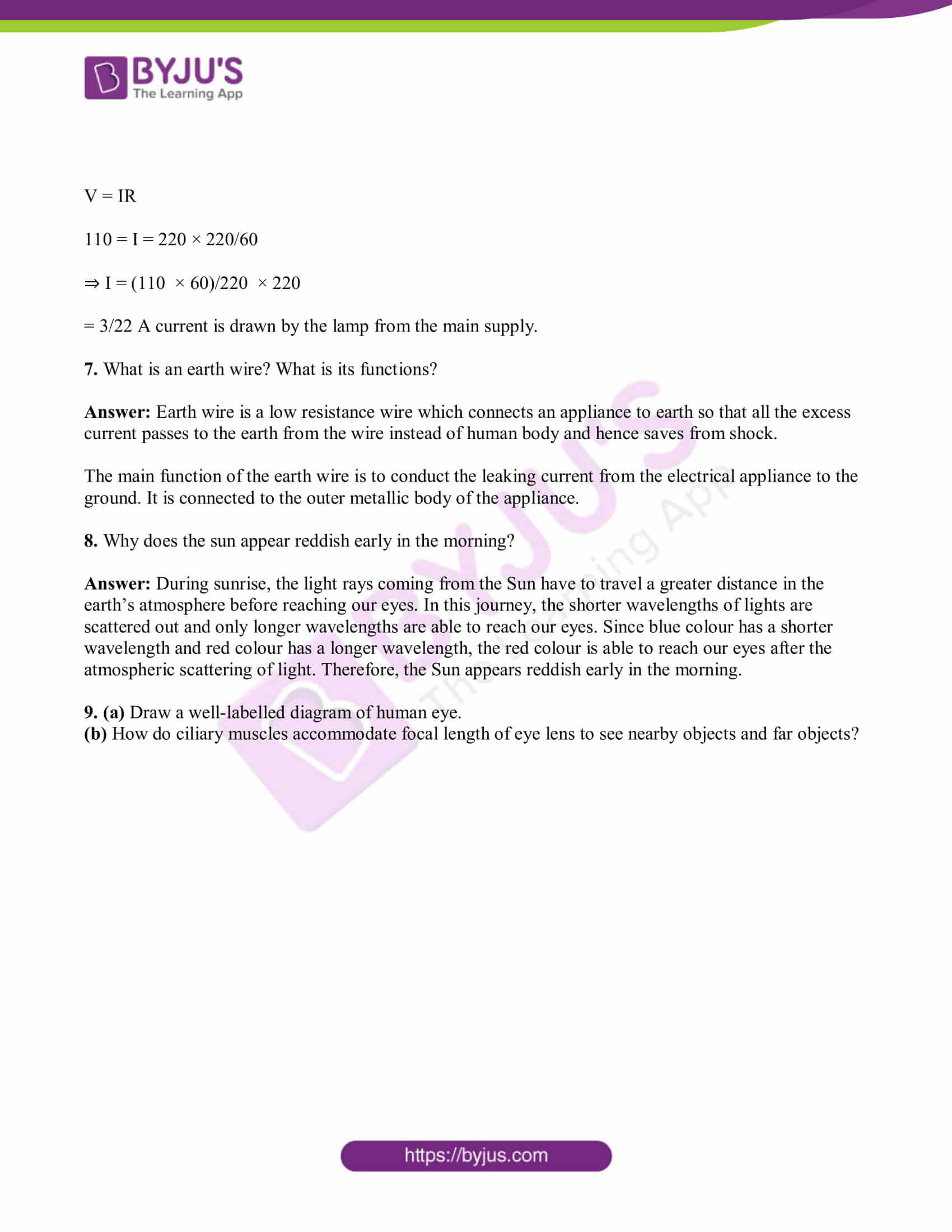 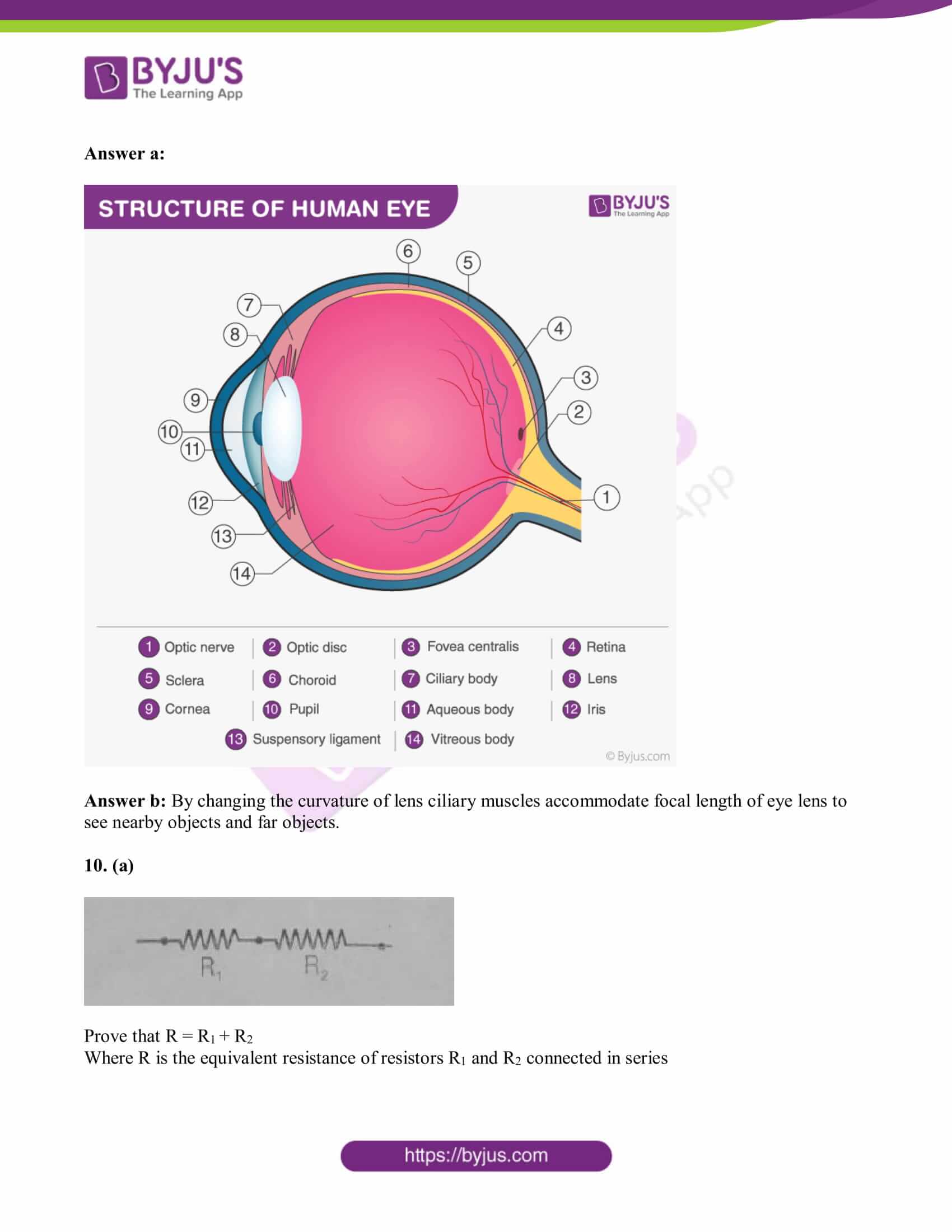 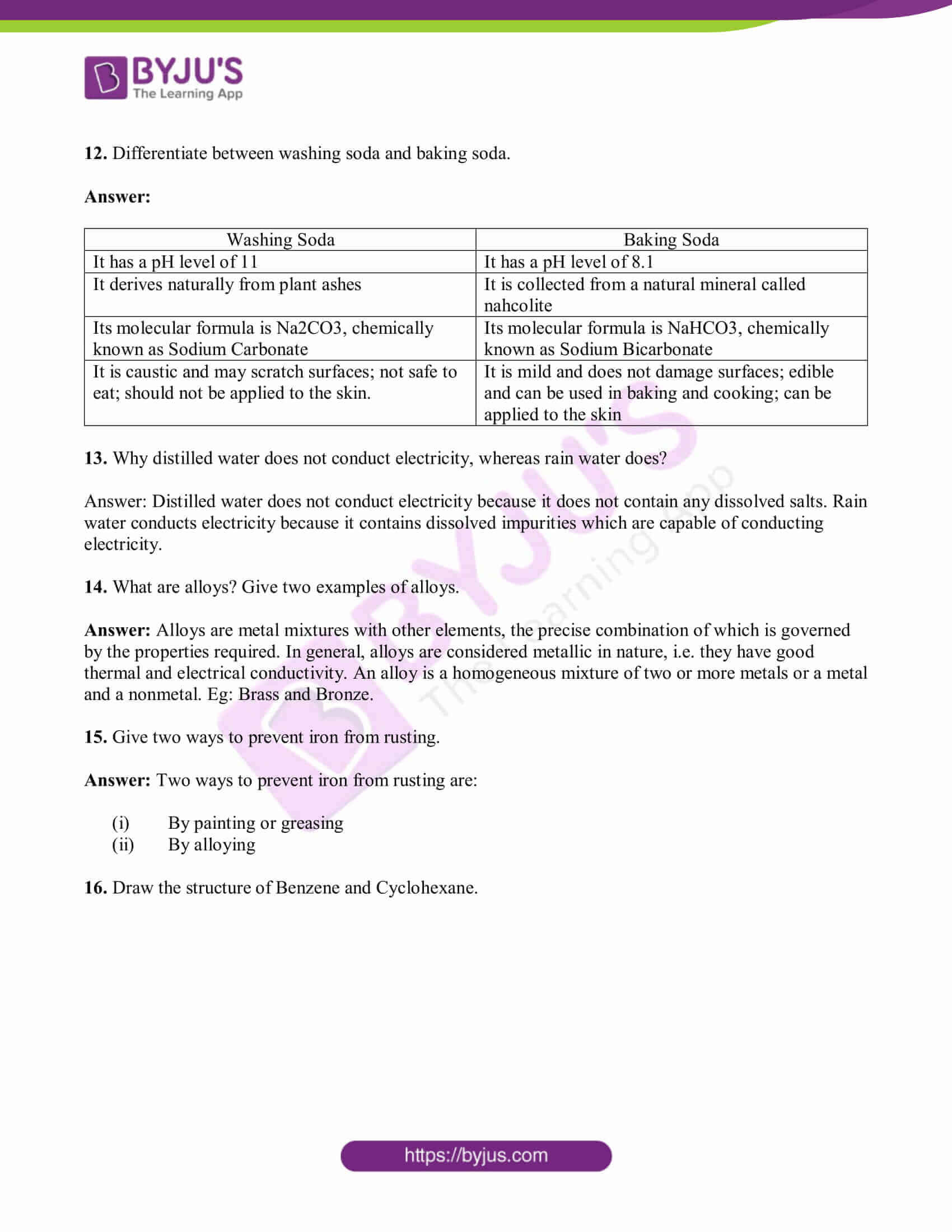 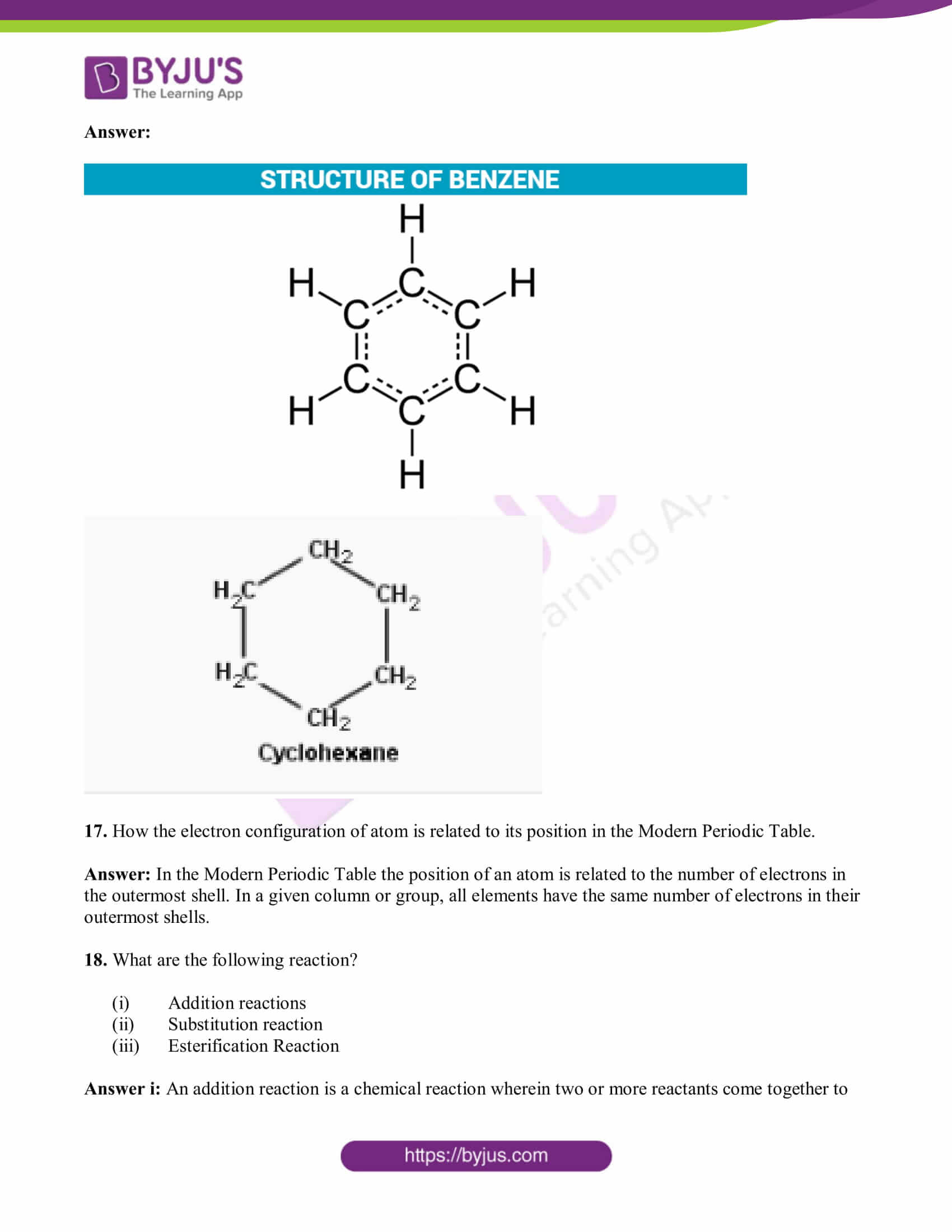 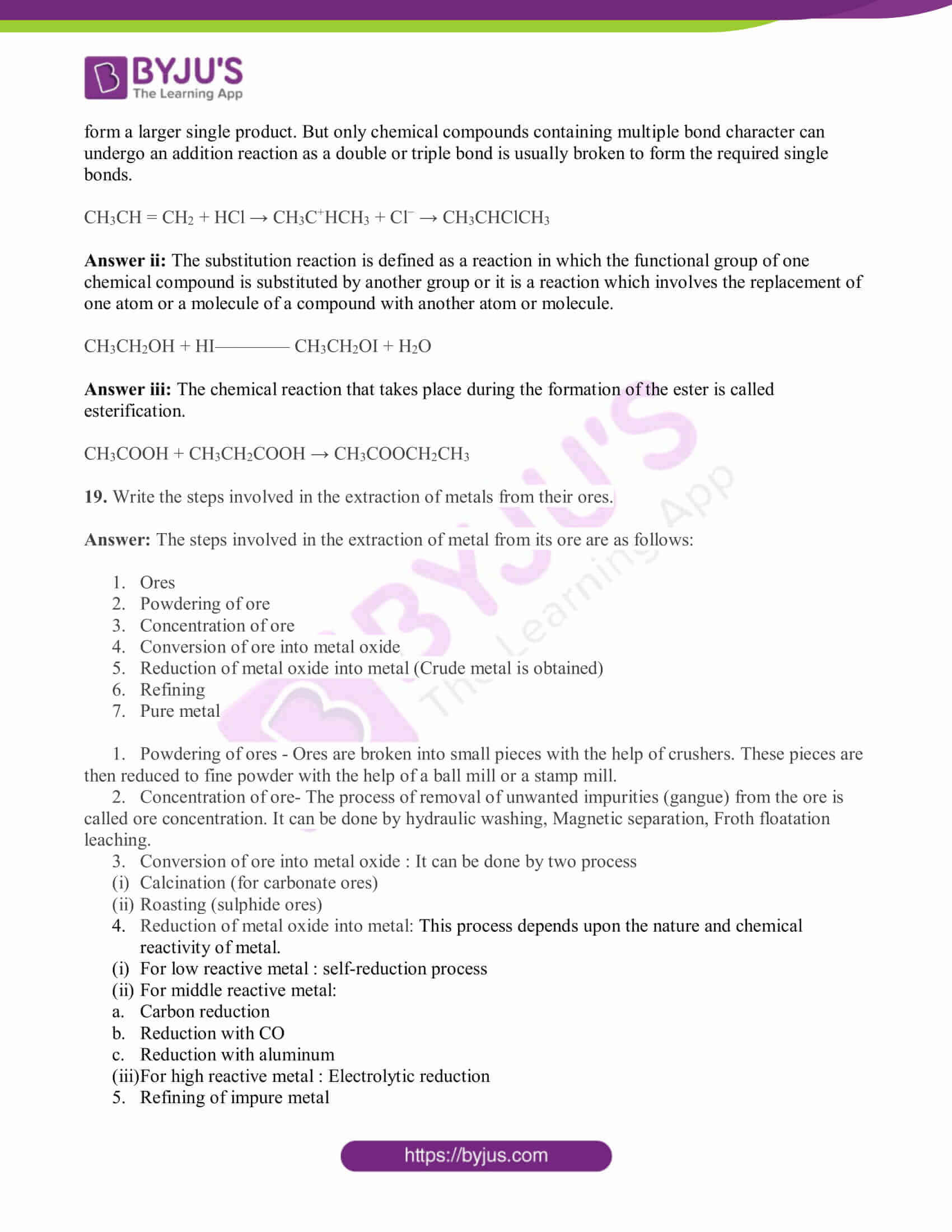 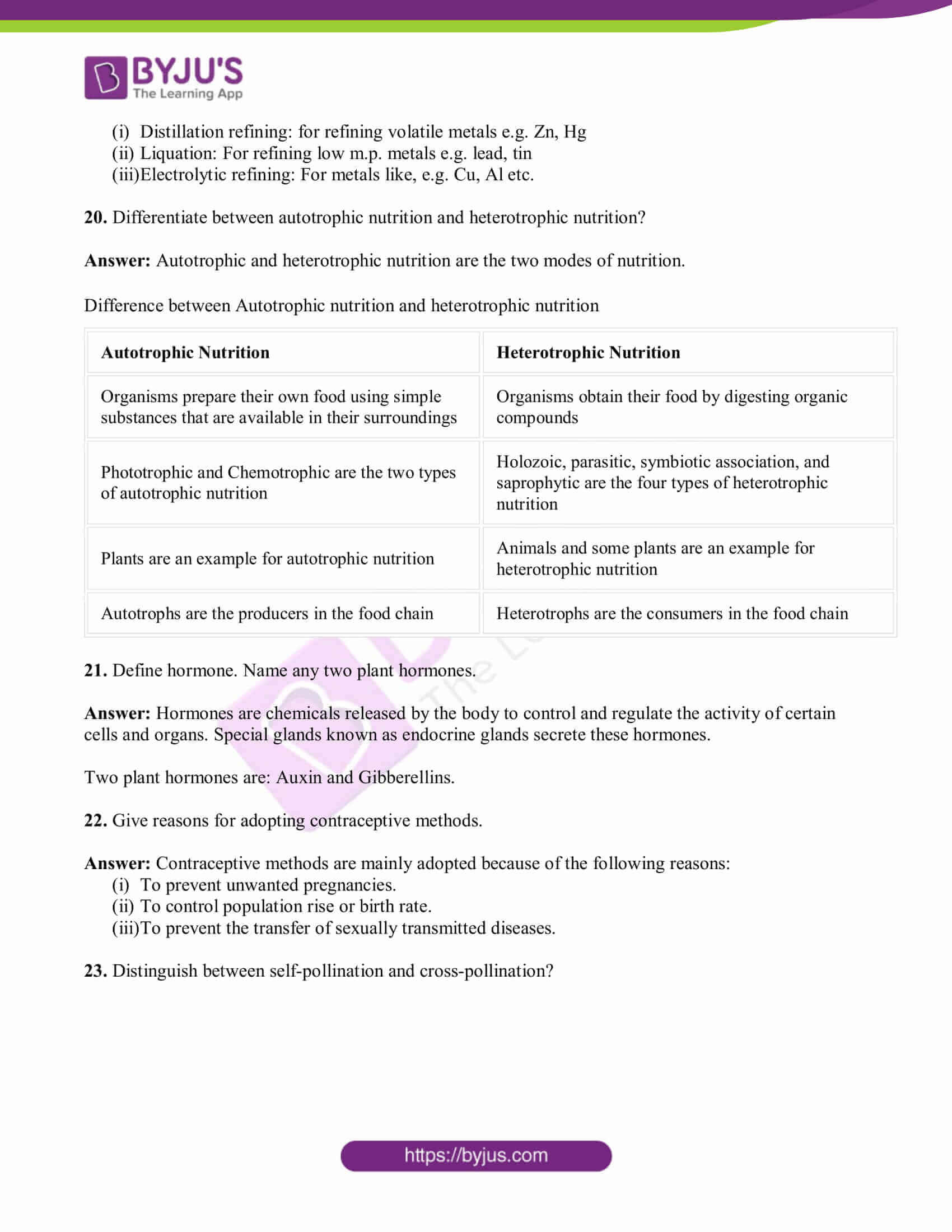 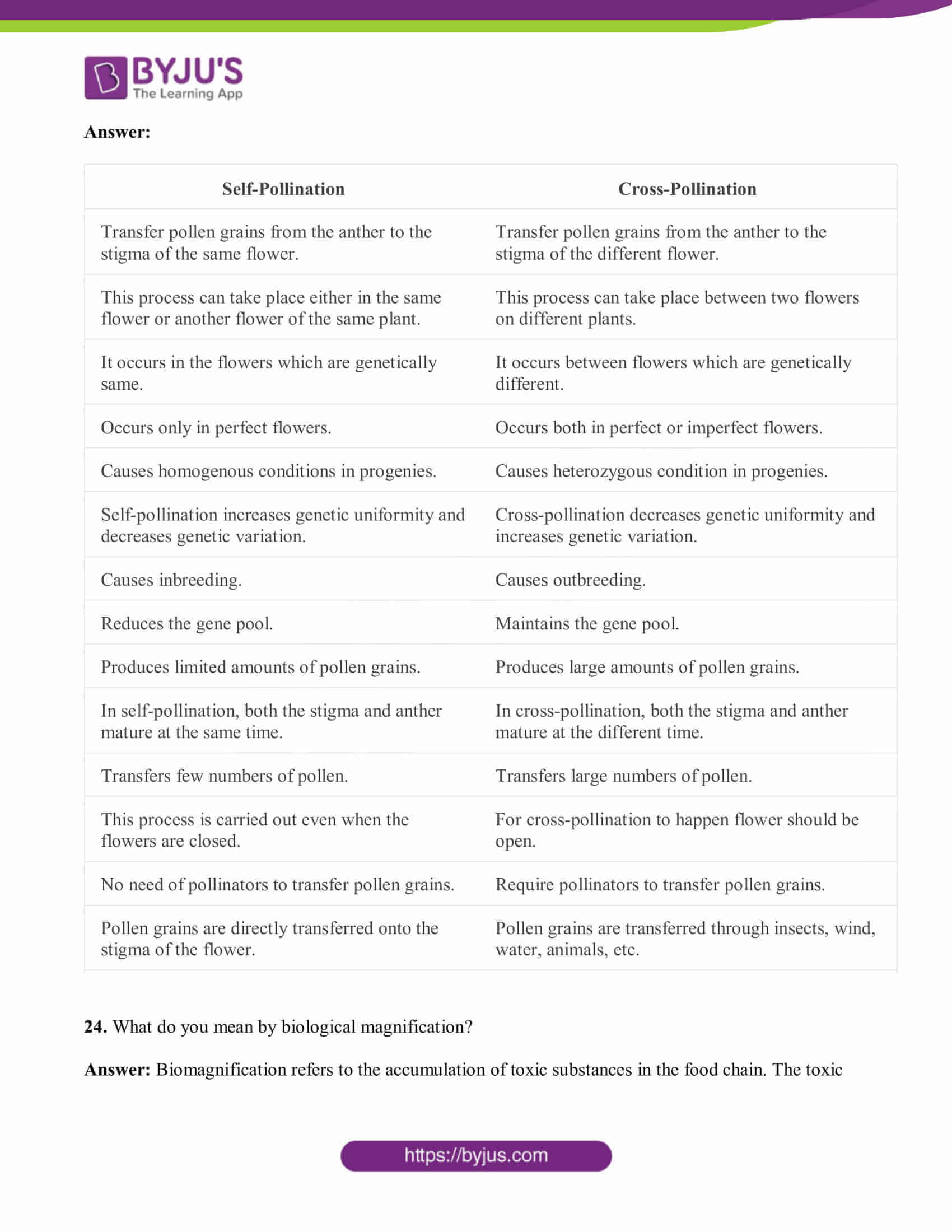 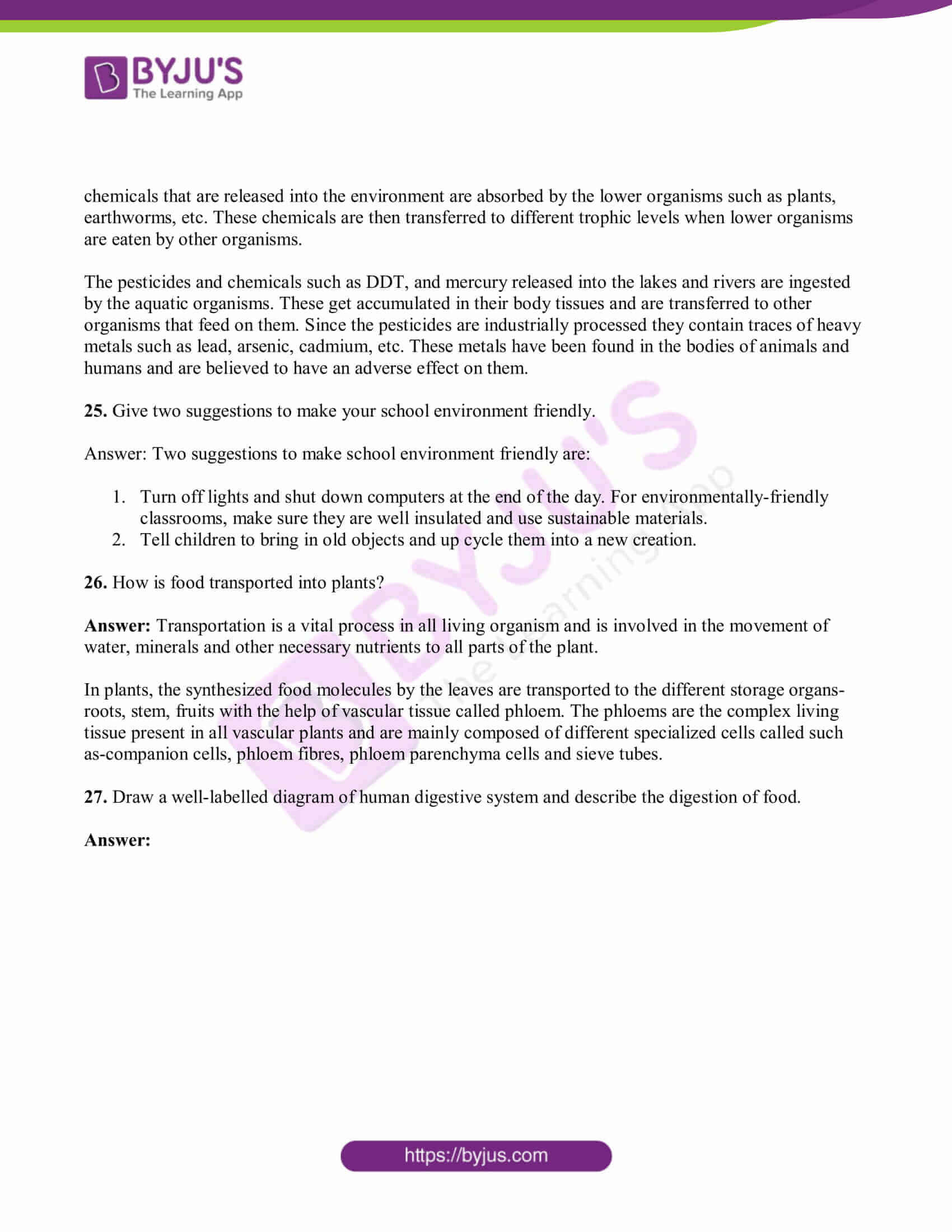 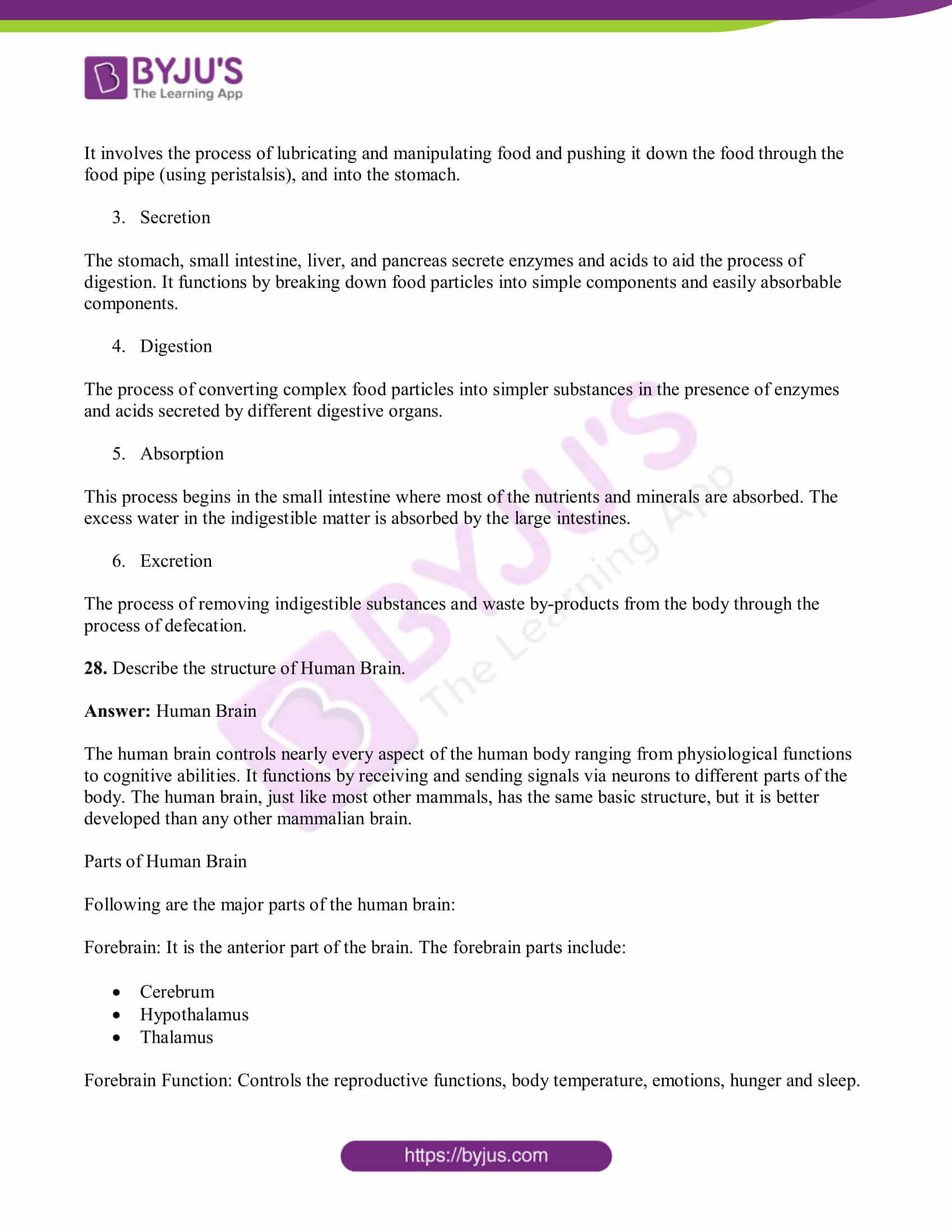 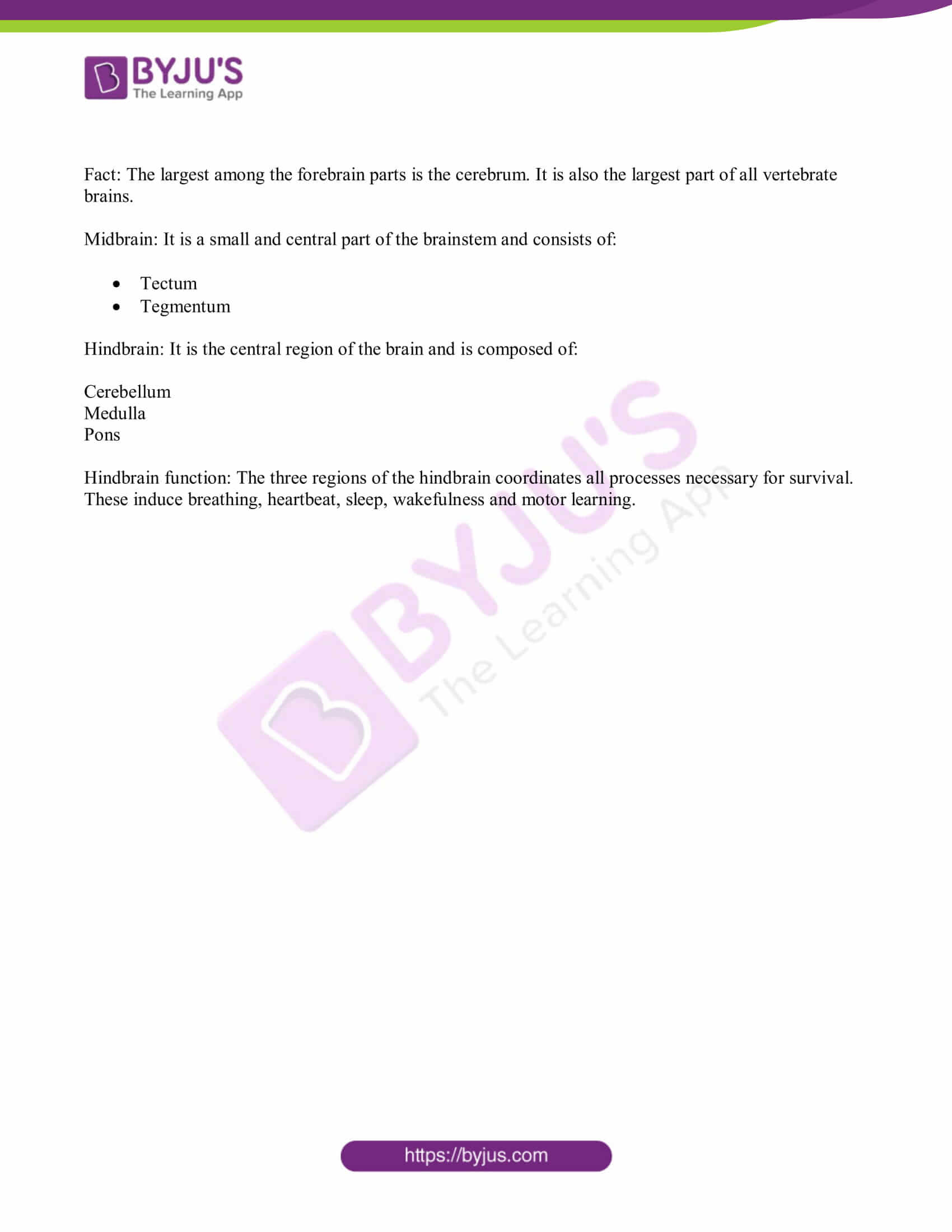 1. The loss of oxygen from a substance during chemical reaction is called

2. Food cans are coated with tin, not with zinc because

(A) Zinc is costlier than tin

(B) Zinc has a higher melting point than tin.

3. Which substance changes colour of Red Litmus in Blue.

4. Which gas is responsible for the global warming?

5. The process of forming a thick oxide layer on aluminum is called

6. How many electrons are there in the outer orbit of an atom of sulphur.

7. How many chambers are present in human heart?

8. An example of homologous organs are

(A) Our arm and dog’s foreleg

(B) Our teeth and elephant’s tusk

(C) Potato and runners of grass

9. Which of the following is unsaturated hydrocarbon

10. Which of the following compounds can be used as a fuel?

11. The chemical formula for bleaching powder is

13. Which one of the following term represents electric power in circuit?

14. What is the commercial unit of electric energy?

15. Which lens can be used for the correction of hypermetropia?

16. Which of the following is not a receptor organ?

17. The number of group in the modern periodic table is

18. Which phenomenon of light does the Tyndall effect show?

(A) Reflection of Light

(B) Refraction of Light

19. Which of the following is a malarial parasite?

21. Which mirror is commonly used as rear-view mirror in vehicles?

22. According to Fleming’s Left Hand Rule, the index from the left hand side indicates

(A) Direction of electric force applied on a conductor

(B) Direction of Magnetic field

(C) Direction of the flow of electric current in a conductor

23. Which of the following is an example of regeneration?

24. Which colour has the largest wave-length?

25. Which is not responsible for Ganga’s pollution?

(A) Fish Framing in Ganga

(B) Washing of clothes in Ganga

26. According to New Cartesian sign convention, the object distance of an object placed before a mirror is taken

27. A rectangular coil of a copper wire is rotated in a magnetic field. The direction of the induced current in the coil changes once in every –

28. Which of the following carbon compound is the most reactive?

29. Which of the following constitutes a food chain?

(A) Grass, wheat and mango

(B) Grass, goat and human

30. Which among these do not act as an endocrine gland as well as an exocrine gland?

31. Which of the following is an ideal source of energy?

32. Which is a non-biodegradable waste?

(B) Peel of banana

33. How many atoms of oxygen are there in one molecule of Glucose?

34. How many bonds are formed between two atoms of hydrogen?

35. The far – point for normal vision is

36. Which type of mode of nutrition is found in fungi?

37. Bile juice is secreted from-

39. Which one of the following lenses has positive focal length?

40. Which one of the following character is not inheritable?

(A) Colour of Eye

(B) Colour of Skin

1. Why do we prefer a convex mirror as a rear-view mirror in vehicles?

Answer: We prefer a convex mirror as a rear-view mirror in vehicles because it gives a wider field of view, which allows the driver to see most of the traffic behind him. Convex mirrors always form a virtual, erect, and diminished image of the objects placed in front of it.

2. Why is a normal eye not able to see clearly the objects placed closer than 25cm?

Answer: A normal eye is unable to clearly see the objects placed closer than 25 cm because the ciliary muscles of eyes are unable to contract beyond a certain limit.

4. Draw a ray diagram for image of an object placed on the principal axis of a convex mirror. Write the nature, position and size of the image formed by the mirror.

Answer: Electric Current is the rate of flow of electrons in a conductor.

The SI Unit of electric current is the Ampere.

7. What is an earth wire? What is its functions?

Answer: Earth wire is a low resistance wire which connects an appliance to earth so that all the excess current passes to the earth from the wire instead of human body and hence saves from shock.

The main function of the earth wire is to conduct the leaking current from the electrical appliance to the ground. It is connected to the outer metallic body of the appliance.

8. Why does the sun appear reddish early in the morning?

Answer: During sunrise, the light rays coming from the Sun have to travel a greater distance in the earth’s atmosphere before reaching our eyes. In this journey, the shorter wavelengths of lights are scattered out and only longer wavelengths are able to reach our eyes. Since blue colour has a shorter wavelength and red colour has a longer wavelength, the red colour is able to reach our eyes after the atmospheric scattering of light. Therefore, the Sun appears reddish early in the morning.

9. (a) Draw a well-labelled diagram of human eye.

(b) How do ciliary muscles accommodate focal length of eye lens to see nearby objects and far objects? 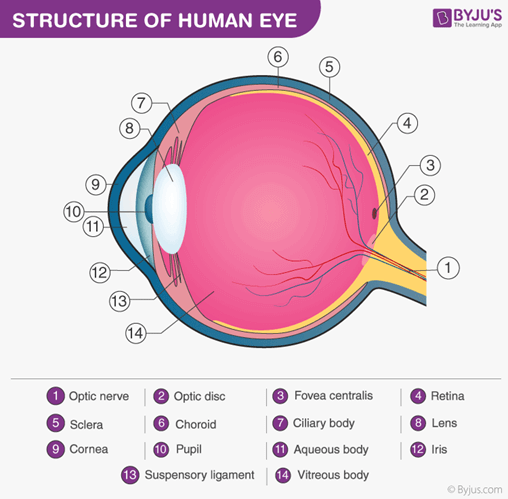 Answer b: By changing the curvature of lens ciliary muscles accommodate focal length of eye lens to see nearby objects and far objects.

Where R is the equivalent resistance of resistors R1 and R2 connected in parallel.

Answer: One equation for decomposition reaction

One equation for combination reaction

13. Why distilled water does not conduct electricity, whereas rain water does?

14. What are alloys? Give two examples of alloys.

Answer: Alloys are metal mixtures with other elements, the precise combination of which is governed by the properties required. In general, alloys are considered metallic in nature, i.e. they have good thermal and electrical conductivity. An alloy is a homogeneous mixture of two or more metals or a metal and a nonmetal. Eg: Brass and Bronze.

15. Give two ways to prevent iron from rusting.

Answer: Two ways to prevent iron from rusting are:

16. Draw the structure of Benzene and Cyclohexane. 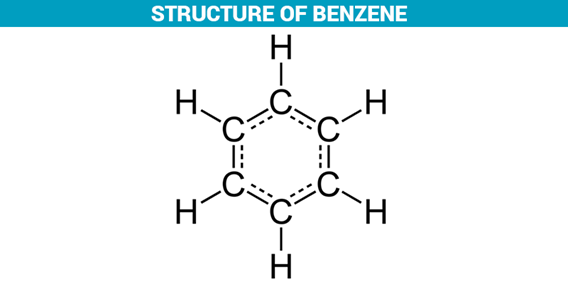 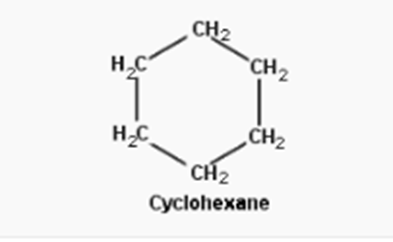 17. How the electron configuration of atom is related to its position in the Modern Periodic Table.

18. What are the following reaction?

Answer i: An addition reaction is a chemical reaction wherein two or more reactants come together to form a larger single product. But only chemical compounds containing multiple bond character can undergo an addition reaction as a double or triple bond is usually broken to form the required single bonds.

Answer ii: The substitution reaction is defined as a reaction in which the functional group of one chemical compound is substituted by another group or it is a reaction which involves the replacement of one atom or a molecule of a compound with another atom or molecule.

Answer iii: The chemical reaction that takes place during the formation of the ester is called esterification.

19. Write the steps involved in the extraction of metals from their ores.

Answer: The steps involved in the extraction of metal from its ore are as follows:

2. Concentration of ore- The process of removal of unwanted impurities (gangue) from the ore is called ore concentration. It can be done by hydraulic washing, Magnetic separation, Froth floatation leaching.

3. Conversion of ore into metal oxide: It can be done by two processes

4. Reduction of metal oxide into metal: This process depends upon nature and chemical reactivity of metal.

Answer: Autotrophic and heterotrophic nutrition are the two modes of nutrition.

Answer: Hormones are chemicals released by the body to control and regulate the activity of certain cells and organs. Special glands known as endocrine glands secrete these hormones.

22. Give reasons for adopting contraceptive methods.

Answer: Contraceptive methods are mainly adopted because of the following reasons:

24. What do you mean by biological magnification?

Answer: Biomagnification refers to the accumulation of toxic substances in the food chain. The toxic chemicals that are released into the environment are absorbed by the lower organisms such as plants, earthworms, etc. These chemicals are then transferred to different trophic levels when lower organisms are eaten by other organisms.

The pesticides and chemicals such as DDT, and mercury released into the lakes and rivers are ingested by the aquatic organisms. These get accumulated in their body tissues and are transferred to other organisms that feed on them. Since the pesticides are industrially processed they contain traces of heavy metals such as lead, arsenic, cadmium, etc. These metals have been found in the bodies of animals and humans and are believed to have an adverse effect on them.

25. Give two suggestions to make your school environment friendly.

26. How is food transported into plants?

Answer: Transportation is a vital process in all living organism and is involved in the movement of water, minerals and other necessary nutrients to all parts of the plant.

In plants, the synthesized food molecules by the leaves are transported to the different storage organs- roots, stem, fruits with the help of vascular tissue called phloem. The phloems are the complex living tissue present in all vascular plants and are mainly composed of different specialized cells called such as-companion cells, phloem fibres, phloem parenchyma cells and sieve tubes.

27. Draw a well-labelled diagram of human digestive system and describe the digestion of food. 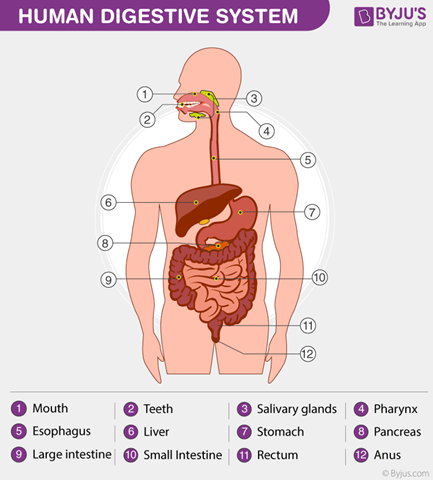 The very first step involves mastication (chewing). The salivary glands, along with the tongue helps to moisten and lubricate food, before being pushed down into the food pipe.

28. Describe the structure of Human Brain.

Forebrain: It is the anterior part of the brain. The forebrain parts include:

Midbrain: It is a small and central part of the brainstem and consists of:

Hindbrain: It is the central region of the brain and is composed of:

Hindbrain function: The three regions of the hindbrain coordinates all processes necessary for survival. These induce breathing, heartbeat, sleep, wakefulness and motor learning.