The earth temperature is becoming warmer day by day. The pretty glaciers have started to melt, greenhouse gases are clouding the world, the sea levels are rising and global warming is right upon us. This condition could be even worse if we do not control it. These atmospheric conditions are extreme or intense enough which may lead to the loss of life.

Weather and climate are two different but related terms one must comprehend. Most of us have seen the weather report on the news dictated by the weather forecaster, speaking about the temperature, cloudiness, humidity, and whether a storm is likely to hit in the next few days and more. This is the day-to-day state of the atmosphere at a particular place.

Weather refers to the condition of a place or an atmosphere on a daily basis. It could be cloudy, sunny, rainy, stormy or clear. It is a part of the natural phenomenon which maintains the equilibrium in the atmosphere. In contrast to the weather, the climate is the long-term condition of a particular region. It refers to the average weather in a place over many years. While the weather could change in just a few hours, climate takes hundreds, thousands, even millions of years to change. However, it is changing at an alarming rate over the past few years. This explains why deserts are too hot while poles are freezing.

Climatic changes are the outcome of influences we had on the atmospheric factors i.e. factors that affect climate. These factors are undergoing changes over and over for a few decades. Here are a few natural factors affecting climate change. 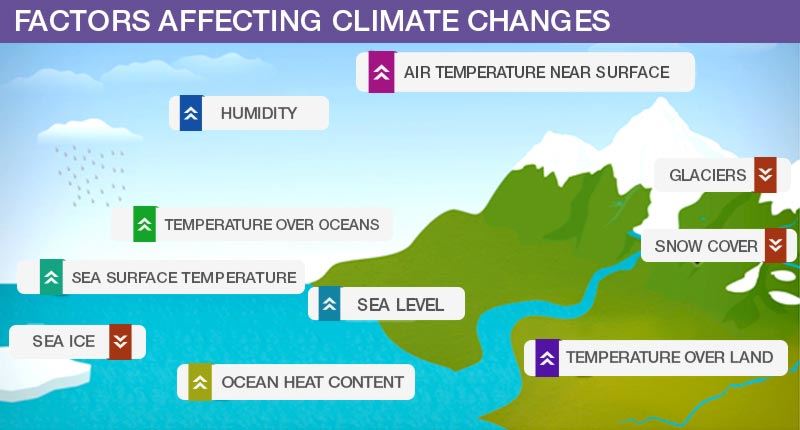 Apart from these natural factors, there is a huge influence of humans on climate changes. Climate change is remarkably induced by human activities. Deforestation, an increase in the human population, pollution caused by the burning of fossil fuels, emission from vehicles and industries are all contributed by humans, and they result in the climatic change.

Increasing the planting of more trees in our surroundings can decrease the amount of carbon dioxide in the atmosphere by the process of photosynthesis.

This is the time to think and act. Learn more about climatic changes and help mankind find a solution to this issue. For more details, visit BYJU’S.