Parasites are organisms that may live either in or on other organisms and survive by deriving nutrients at the expense of the organism it is living in. A variety of parasites affect humans. Ascaris is a parasitic large roundworm which causes Ascariasis disease. Ascaris and Wuchereria are some of the parasitic helminths that infect humans.

The disease, Ascariasis is caused by an intestinal parasite called Ascaris also known as roundworm. The roundworm is a pale white, long slender tube-like worm that lives in the intestines of humans. The roundworm is present in the faeces of a person infected with it, in the form of eggs. Flies generally are considered the vector for roundworms in humans. Roundworms are generally asymptomatic but symptoms may appear depending on the number of roundworms present in the person. Symptoms include fever, shortness of breath, malnutrition, abdominal swelling and diarrhoea. Children are the most affected by this infection. 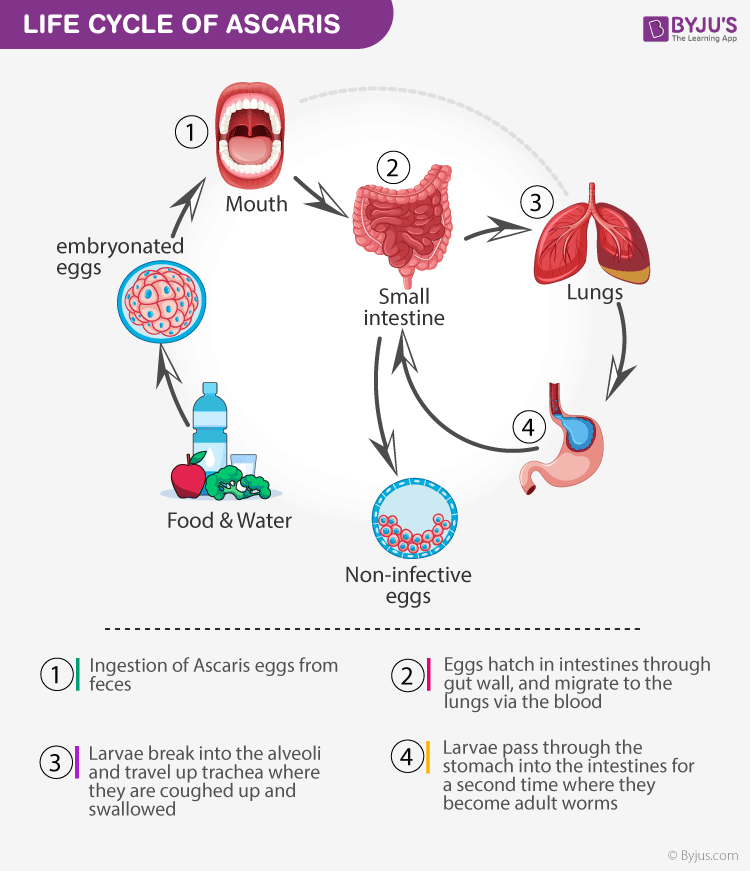 The eggs are transported from the infected faeces to a healthy individual by flies. The point of entry for the parasite usually being from the mouth, i.e., from unhygienic food and water. The eggs hatch and pass through the intestines and enter the lungs through the blood cells. Here they break into the alveoli in the lungs and move to the trachea where they are swallowed and coughed. When the larvae pass through the stomach for the second time they mature into adult worms.

Medicines that are used to kill roundworms are called acaricides. The roundworm treatments recommended by the WHO are:

Improved access to sanitation would be the biggest step towards ridding the world of ascariasis. Properly functioning and cleaning toilets greatly reduce the possibility of a fly picking up a roundworm egg and infecting someone else. Washing hands with soap after using the restroom is another thing we should practice religiously.

For more detailed information about Ascariasis and other related diseases, visit BYJU’S.

How can you prevent Ascaris lumbricoides infection?

Infection by Ascaris lumbricoides can be controlled by:
a) Proper hygiene and sanitation.
b) Disposal of faeces away from habitations can help prevent contamination and eliminate the use of nightsoil as fertiliser for crops.

Why must fertilised eggs of Ascaris remain in the soil for weeks before they can infect a person?