Dengue is a mosquito-borne viral disease caused by the Dengue virus. In this case, the dengue virus is transmitted by female mosquitoes – Aedes aegypti. These dengue mosquitos generally bite during the daytime and are found everywhere (Both inside and outside the house). These mosquitos are found to be at the peak of their activeness at dawn and dusk. The symptoms can develop only after 6 to 10 days after bitten by an infected mosquito.

Dengue fever is transmitted by mosquitos which carry the dengue virus, which has four varied serotypes to infect human beings. The serotypes mentioned above denotes a set of microorganisms that are exceptionally closely associated. These microorganisms can only be distinguished due to them having somewhat dissimilar antigens (the alien unit that affects the body and making us produce antibodies) which prompt the body to create some dissimilar antibodies. Dengue cases are more common in subtropical and the tropical regions of our planet, including our country.

Signs and Symptoms of Dengue Fever 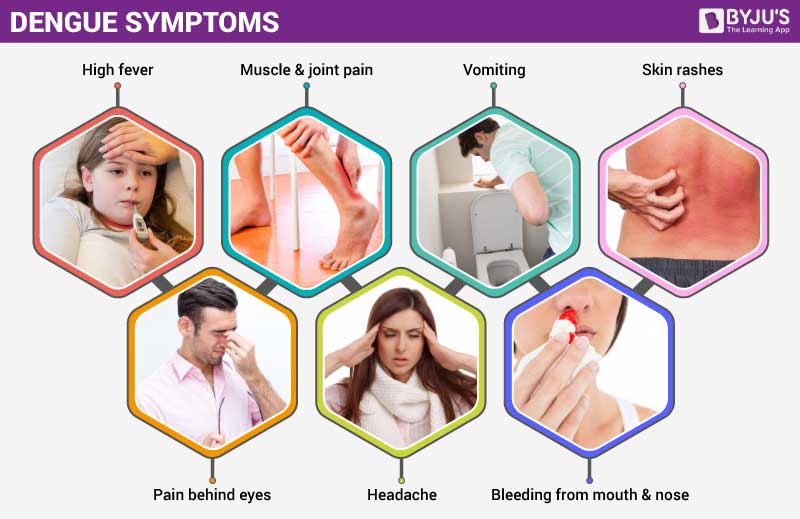 Dengue has an unexpected attack, viz. a sudden start and these symptoms could be an indicator of its onset.

The presence of the Dengue virus in the blood cells can be diagnosed by isolation of the virus, testing serum samples, and by other molecular methods. A patient with this syndrome is allowed to have a few blood tests to check the total count of red blood cells, blood platelets, and other physical examinations are conducted by the physician to evaluate that the symptoms are caused by a dengue infection.

Till today, there is no definite treatments or specific medicine to treat dengue infection. In general, the doctor may generally recommend regulating the pain and fever by using paracetamol instead of aspirin(as it might stimulate bleeding) and increasing fluid ingestion. Children below the age of 12 should not be given aspirin until and unless specially prescribed by the doctor.

The patient should take proper bed rest especially during the days when the fever is at its peak and take exclusion from work, school preschool or childcare.

People suffering from dengue must stay away from places where they could get bitten by mosquitoes and should stay at home until they are no longer infectious (around 3-5 days).

For avoiding this illness, make sure your surroundings are free of any water logging issues as the Aedes mosquito prefers to breed in stagnant clean water that could be found easily nearby our habitats.

Until now, no vaccine has been developed to prevent Dengue virus. The only prevention is to avoid mosquito bites.