What is Primary Ciliary Dyskinesia?

Primary ciliary dyskinesia or PCD is a genetic disorder.  The disease is characterized by abnormal functioning of cilia and flagella. It leads to chronic respiratory infection, infertility and wrongly placed internal organs. 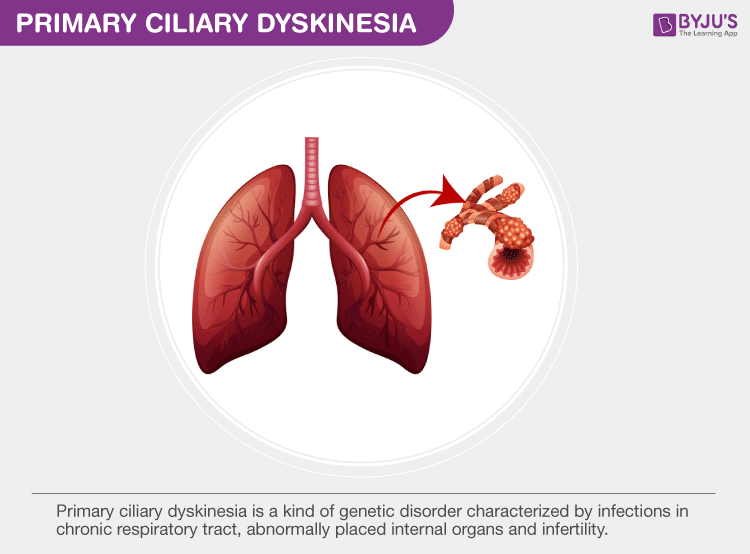 What is Cilia in a Cell?

Cilia are finger-like microscopic projections present on the cell surface. These projections line the internal surface of the respiratory tract, reproductive system and other organs. Flagella are long locomotory structures present on bacterial and other cells such as gametes and sperms.

Ciliary movement helps in transferring mucus towards the throat in the respiratory tract. This coordinated movement helps in eliminating bacteria, fluid and other foreign particles outside the lungs. Newborn babies experience difficulties in breathing due to primary ciliary dyskinesia. In these conditions, bacteria remain in the respiratory tract and causes infection due to improper functioning of cilia which plays a major role in erasing fetal fluid from the lungs.

People with PCD face frequent nasal congestion and chronic cough. If the condition persists for a longer duration, these respiratory tract infections may lead to serious damage to bronchi and life-threatening breathing complications.

It may also be a result of wrongly placed internal organs in the abdomen and chest. These abnormalities arise early in the embryonic development and in most of the cases results in the mirror image reversal of organs, e.g. heart is placed on the right side instead of the normal left side.

PCD can be diagnosed early in infants with breathing problems and other lung diseases. A paediatrician, who specializes in treating children, suspects PCD when a child has chronic sinus or lung infections.

The sign and symptoms of this syndrome vary from person to person.

Unfortunately, there is no permanent cure for this condition. The treatment mainly includes managing symptoms. Treatment includes:

1. What is Primary Ciliary Dyskinesia?

Cilia are finger-like microscopic projections present on the cell surface. These projections line the internal surface of the respiratory tract, reproductive system and other organs.

To explore more about primary ciliary dyskinesia and other respiratory tract diseases, register at BYJU’S.