What is Acid Chloride?

Acid chloride has the molecular formula RCOCl, where R is a side chain. They are carboxylic acid reactive derivatives.

An acyl chloride (or acid chloride) is an organic compound composed of a chlorine atom attached to an acyl group in organic chemistry. An acyl group is a functional group defined by the molecular formula of RCO.

Thus, the acid chloride family is part of a larger organic family known as acyl halides.

Acid chlorides are formed when carboxylic acids react with thionyl chloride (SOCl2). The carboxylic acid’s hydroxyl group is converted to a chlorosulfite intermediate during the reaction, making it a better leaving group. The chloride anion formed as a result of the reaction acts as a nucleophile.

2. Solubility- They dissolve in organic solvents like alcohol, ether, and chloroform.

Due to their high reactivity, acid halides can be easily converted into other acyl compounds via nucleophilic acyl substitution. 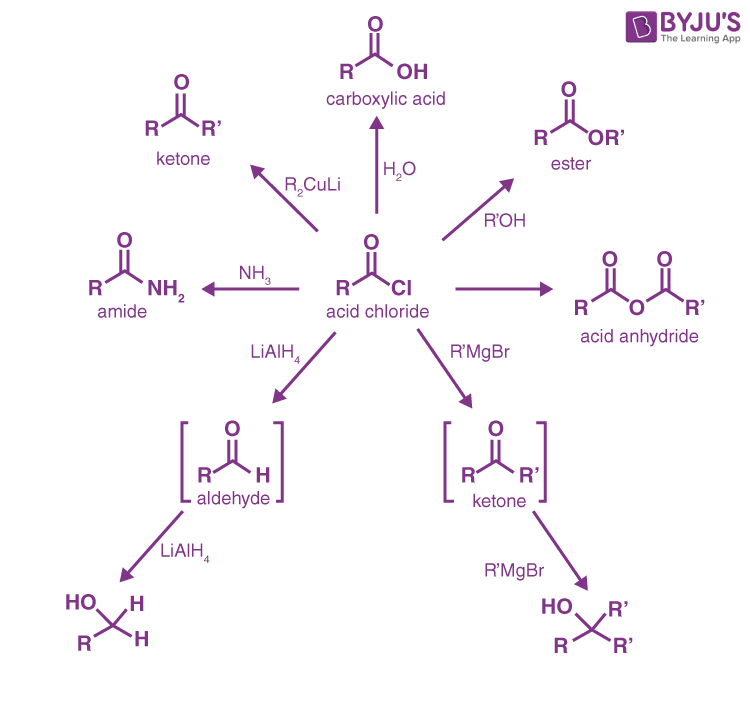 1. They are the most reactive of all carboxylic acid derivatives.

3. Acyl chlorides can be easily hydrolyzed by water to produce the corresponding carboxylic acids.

4. Esters are formed when acid chlorides react with alcohol nucleophiles. This is the preferred method for producing esters. To remove the HCl produced, pyridine is frequently added to the reaction mixture.

6. In the presence of palladium, they are reduced by hydrogen with BaSO4 to an aldehyde. This reaction is the Rosenmund Reaction.

9. When an acid chloride is reacted with a diorgano cuprate (Gillman) reagent (R2CuLi), an excellent yield of ketone product is produced.

Since acyl chlorides are such reactive compounds, they are generally toxic and should be handled with extreme caution. They are lachrymatory chemicals because they can react with water on the eye’s surface, producing hydrochloric and organic acids that are irritating to the eye. Inhaling acyl chloride vapours can cause similar problems.

Acid chlorides are reactive chemical species by nature, and they are used as key building blocks in a wide range of downstream applications. Some of the uses are as follows-

How is acid chloride formed?

What are examples of acid chlorides?

Acyl chlorides are generally toxic, and special precautions must be taken when handling them. They can react with water on the eye’s surface, producing hydrochloric and organic acids that causes irritation to the eye.

Since there is no H+ to donate, anhydrous acid chloride is neutral. However, in an aqueous medium, acid chloride can react with water to form carboxylic acid and HCl.

Is it more acidic to use acyl chlorides or carboxylic acids?

Since acyl chlorides have a good leaving group attached to the carbonyl carbon, they are more reactive than carboxylic acids or carboxylic esters.