What is Acid Dissociation in Water?

Solvated hydroxide and solvated protons are in equilibrium with liquid water. To define the concentration of these solvated ions in water, we usually use a value related to the equilibrium constant. The Kw constant for water dissociation is 1 x 10-14.

Acid and base solutions in water are typically described using pH and pOH. The concentration of solvated protons equals that of solvated hydroxide anions in pure water, and the pH is 7. The pH of acidic solutions is lower, whereas the pH of basic solutions is higher.

The acid dissociation constant is a direct result of the dissociation reaction’s underlying thermodynamics; the pKavalue is proportional to the standard Gibbs free energy change for the reaction. The pKa value fluctuates with temperature and may be understood qualitatively using Le Châtelier’s principle: when the reaction is endothermic, Ka increases and pKa drops with increasing temperature; when the reaction is exothermic, Ka increases and pKa reduces with increasing temperature.

An acid is a chemical that dissociates in an aqueous solution, producing the hydrogen ion H+ (a proton), according to Arrhenius’s original molecular definition:

A dissociation constant is the equilibrium constant for this dissociation reaction. Because the released proton reacts with a water molecule to form the hydronium (or oxonium) ion H3O+ (uncovered protons don’t exist in solution), Arrhenius proposed that the dissociation be represented as an acid-base reaction:

This was further generalised by Bronsted and Lowry to a proton exchange reaction:

What is Ka in Chemistry?

In an aqueous solution, strong acids dissociate fully and have negative Ka values. We can assume that the [H+] in a strong acid solution is equal to the acid’s initial concentration. The following is a list of strong acids. 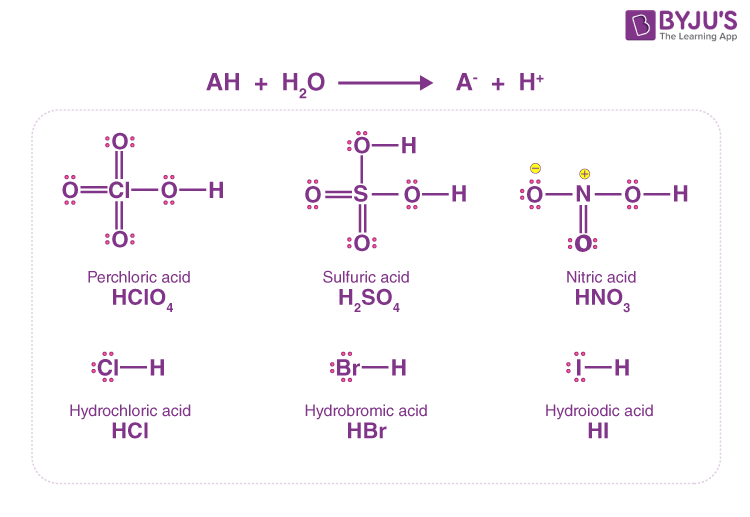 In aqueous solution, weak acids dissociate only partially. The pKa = -log (Ka). The table below shows some of the weak acids:

In the following situations, a solvent is more likely to cause ionisation of a dissolved acidic molecule:

The aprotic solvents dimethyl sulfoxide (DMSO) and acetonitrile are frequently used to determine the pKa values of organic compounds (ACN).

In an acidic solvent, acid ionisation is less than in water. When hydrogen chloride is dissolved in acetic acid, for example, it becomes a weak acid. Because acetic acid is a far weaker base than water, this is the case.

What happens when acids dissociate in water?

An acid dissociates into hydrogen ions (H+) and anions in an aqueous (watery) solution. A strong acid’s molecules dissociate, resulting in a large concentration of H+.

What is a protic solvent?

A protic solvent has a hydrogen atom bound to an oxygen (as in a hydroxyl group), nitrogen (as in an amine group), or fluoride (as in a fluoride group) (as in hydrogen fluoride). Any solvent that contains a labile H+ is referred to as a protic solvent. Solvent molecules rapidly supply protons (H+) to solutes, commonly through hydrogen bonding. The most frequent protic solvent is water.

The relationship between the number of products and reactants present at equilibrium in a reversible chemical reaction at a particular temperature is expressed by this number.

What do the terms Lewis acid and Lewis base mean?

Lewis acids and bases are electron-pair acceptors and electron-pair donors, respectively. As a result, a Lewis base can give a pair of electrons to a Lewis acid, resulting in a product with a coordinate covalent bond. A Lewis adduct is another name for this item.

What is meant by dielectric constant (relative permittivity)?