What is the Lewis Dot Structure?

Aluminium is in the Periodic Table Group IIIA and thus has three valence electrons. It is denoted by the symbol Al. A single aluminium atom contains 13 electrons. The first orbit has two electrons, the second orbit has eight, and the third orbit has three. It is surrounded by three dots. 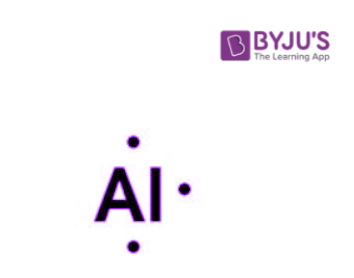 The following are some of the physical properties of aluminium:

Example of Compounds by Aluminium

Chlorine (Cl) can also form a bond with aluminium (Al). Aluminium has three extra electrons that can easily be used by chlorine atoms to bond. The formula of the compound is AlCl3.

Aluminium (Al) and phosphorus (P) are also capable of bonding. Aluminium has three extra electrons and every phosphorus atom needs to gain three electrons. It has the chemical formula AlP3.

What is the electronic configuration of Aluminium?

The electronic configuration of Aluminium is [Ne] 3s2 3p1.

How many valence electrons are there in aluminium?

The general electronic configuration of aluminium is 2,8,3. This means that there are 3 electrons present in the outermost shell. Therefore, the valence electrons for aluminium is 3.

Is aluminium a metal?

Yes, aluminium is a metal. It belongs to group III-A or the boron group. It is the most abundant element in Earth’s crust and the most widely used non ferrous metal.

What is the lewis dot structure of aluminium?

Aluminium has three valence electrons. It is denoted by the symbol Al. The lewis dot structure of aluminium is that three dots surround its chemical symbol Al.

Why is aluminium the best metal?

Aluminium is a highly versatile metal with numerous advantages; it is well-known for being both lightweight and flexible. It can be cast, melted, formed, machined, and extruded, allowing it to be manufactured into a variety of shapes and then fabricated to suit a wide range of applications.