What is Candle Flame?

Introduction to candle flame concept tells about the components and structure of flame. Candles produce light by releasing heat and all the turn on the candle produces come from a chemical reaction known as combustion in which wax reacts with oxygen in the air to produce carbon dioxide.

In a general candle, flame colour depends on three factors:

There are two types of flames: 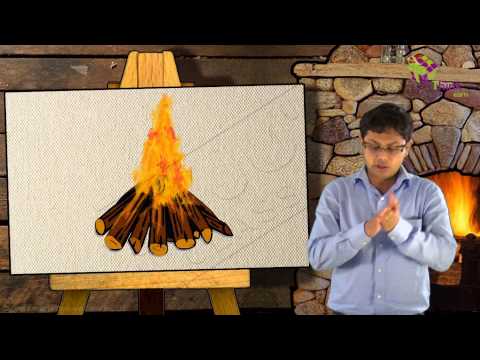 In a candle flame, a quarter of the energy created is released as heat.

Due to complete combustion, the outer zone is blue. This zone is the hottest in temperature when compared to the other zones. This blue coloured zone is the non-luminous part of the flame.

The yellow colour region which is the bright part of the flame is the middle zone. It is moderately hot and partial combustion of fuel takes place. The least hot region of the flame is present innermost. This inner zone is black due to the presence of unburnt wax vapours.

How is a flame formed?

Flames are created at a given point in the combustion process, called the ignition stage. The flame is the fire’s visible portion. Flames mainly consist of carbon dioxide, water vapour, oxygen, and nitrogen. If hot enough to produce plasma, the gases may become ionized.

Why is a fire blue?

Blue flame is caused by the incandescence of very fine soot particles formed inside the blaze. Owing to a more full combustion, less black body-radiating soot is created with increasing oxygen supply, and the reaction produces enough energy to excite and ionize gas molecules in the flame, leading to a blue appearance.

How many zones are there in a candle flame?

A candle flame is made up of three distinct regions. Each region has differing temperatures. Each zone has different colours and this will help us understand each zone’s temperatures. The outside region is dark, because of full combustion.

What are the types of flames?

There are three main types of flame: neutral (balanced), excess acetylene (carburizing), and excess oxygen (oxidizing). A pure flame is considered neutral because the metal being welded would in most situations have no chemical effect.

What colour flame is the coolest?

The cooler component of a diffusion (incomplete combustion) blaze would be fiery, changing to orange, yellow, and white as temperature rises as shown by shifts in the continuum of black-body radiations. For the area of a given flame, on this scale the closest to white, the hotter the portion of the flame is.

To learn more about candle flames and other related topics refer to Chemistry Articles at BYJU’S – The Learning App.