In 1787, the French scientist Jacques Charles discovered that volume of a gas varies when we change its temperature, keeping the pressure constant. Later, in 1802, Joseph Gay-Lussac modified the concept given by Charles and generalized it as Charles’s law. Gases obey Charles law at a very high temperature and low pressure.

It can be stated as:

Then equation (iii) can be written as

In general, we can write it as

The value of k2 depends on the pressure of the gas, its amount and also on the unit of volume V.

At a fixed pressure, when the volume is varied, the volume-temperature relationship traces a straight line on the graph and on moving towards zero volume all lines intersect at a point on the temperature axis which is -273.15˚C. Each line in the graph of volume Vs temperature is known as isobar (Since pressure is constant). The least hypothetical temperature of -273˚C at which a gas will have zero volume is called as absolute zero. 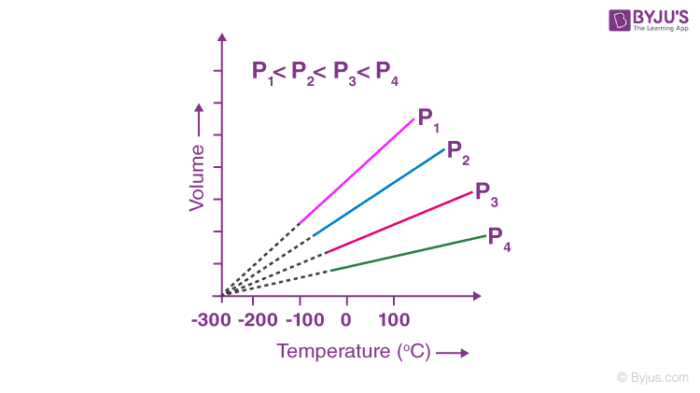 In this article, we studied about one of the fundamental gas laws in chemistry i.e., Charles law. To learn about other gas laws and to get deeper knowledge about the Gas Laws, download BYJU’S the learning app.’

Test your Knowledge on Charless-law!
Q5