Metals are the electropositive element where they tend to donate electrons and form positive ions and become stable. For example:
Na → Na+ + e–

Metals also generally have certain distinguishing physical properties that make them easy to identify and classify.

Some main physical properties of metals are;

Reaction Of Metal With Oxygen

Metals react with oxygen to form metal oxides. Metals donate electrons to oxygen for the formation of metal oxides. For example,
4K + O2 → 2 K2O
Metal oxides are generally basic in nature but it can also be amphoteric in nature. Amphoteric oxides mean that they are acidic as well as basic in nature. Some metals like sodium and potassium react vigorously with oxygen. Whenever sodium or potassium is exposed to air it catches fire. Hence, they are kept in kerosene.

Reaction Of Metal With Water

Some metals react with water to form metal hydroxide whereas some of them do not react. Reactivity with water differs from metal to metal.

Whereas, magnesium and zinc do not react with cold water. They form their respective oxides when reacted with hot water.
Mg + H2O → MgO + H2

Iron is less reactive than sodium, potassium, calcium, zinc and magnesium. It does not react with cold and hot water, but it reacts with steam to form magnetic oxides.
3Fe + 4H2O → Fe3O4 + 4H2

Metals like sodium, potassium, lithium and calcium react vigorously with dilute HCl and H2SO4 to form their metal salt and hydrogen.

Metals which fall below hydrogen in the reactivity series does not react with dilute acids. They cannot displace hydrogen to form a bond with a non-metal anion.

Reaction of Metal With Other Metal Salts

Metals are arranged according to the electrode potential of metals. The electrochemical series is shown below. 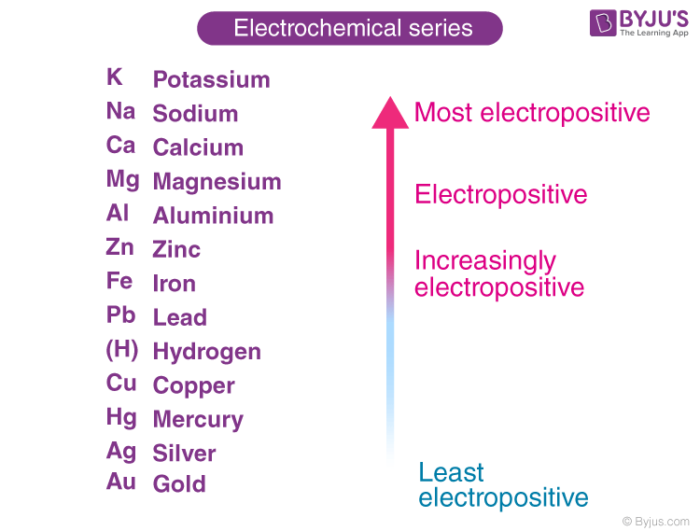 Knowing this electrochemical series we will get to know which metal can displace which metal in a chemical reaction. Keep visiting BYJU’S to know more about non-metals and elements in detail.

Properties of Metals and Non-Metals Test your Knowledge on Chemical properties of metals!
Q5