The middle layer of the periodic table is filled with d block elements. The inner d orbits of group 3 to group 13 are filled progressively. On the other hand, f-block elements are found outside at the bottom of the periodic table. In these elements, 5f and 4f orbitals are filled progressively. Three series of transition elements are recognized by the filling of 3d, 4d, 5d orbitals. They have high boiling and melting point. The metallic properties exhibited by the transition elements are- 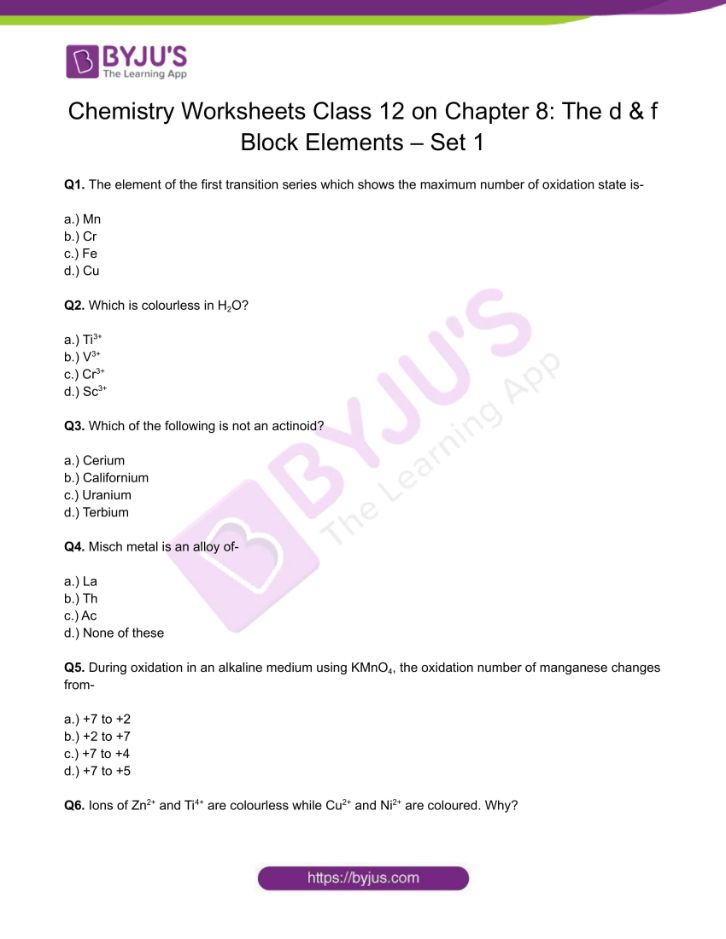 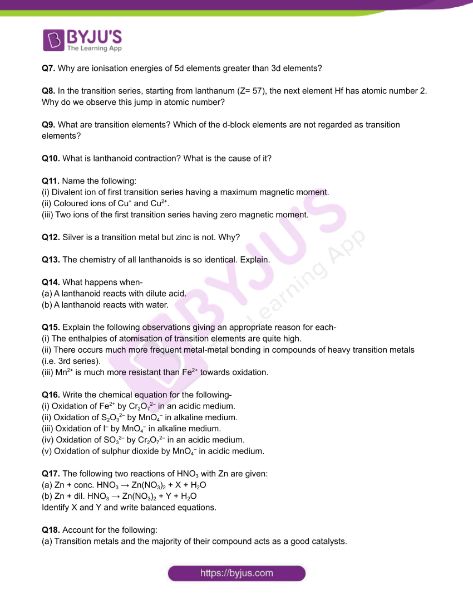 Q1. The element of the first transition series which shows the maximum number of oxidation state is-

Q2. Which is colourless in H2O?

Q3. Which of the following is not an actinoid?

Q4. Misch metal is an alloy of-

Q5. During oxidation in an alkaline medium using KMnO4, the oxidation number of manganese changes from-

Q7. Why are ionisation energies of 5d elements greater than 3d elements?

Q8. In the transition series, starting from lanthanum (Z= 57), the next element Hf has atomic number 2. Why do we observe this jump in atomic number?

Q10. What is lanthanoid contraction? What is the cause of it?

(i) Divalent ion of first transition series having a maximum magnetic moment.

Q12. Silver is a transition metal but zinc is not. Why?

Q13. The chemistry of all lanthanoids is so identical. Explain.

(a) A lanthanoid reacts with dilute acid.

(b) A lanthanoid reacts with water.

Q15. Explain the following observations giving an appropriate reason for each-

(i) The enthalpies of atomisation of transition elements are quite high.

(iii) Mn2+ is much more resistant than Fe2+ towards oxidation.

Q16. Write the chemical equation for the following-

(iii) Oxidation of I– by MnO4– in alkaline medium.

(v) Oxidation of sulphur dioxide by MnO4– in acidic medium.

Q17. The following two reactions of HNO3 with Zn are given:

(a) Transition metals and the majority of their compound acts as a good catalysts.

Q19. Explain the steps of preparation of potassium dichromate?

Q20. Compare the chemistry of actinoids with that of lanthanoids with special reference to: