The elements present in the middle of the periodic table from Group 3 to 12 are called d-block elements. The name d- blocks because the last electron enters into the d-orbital of the penultimate shell. These are often called transition elements because their characters lie between highly reactive metallic elements of s-block and nonmetallic elements of p-block elements. There are four series in the d block corresponding to the filling up of 3d, 4d, 5d or 6d orbitals.

On the other hand,f block elements are found outside at the bottom of the periodic table. The name f- blocks because the last electron enters into the f-orbital of the anti-penultimate shell. These are also called inner transition elements. There are 2 series in the f block, corresponding to the filling up of 4f and 5f orbitals. 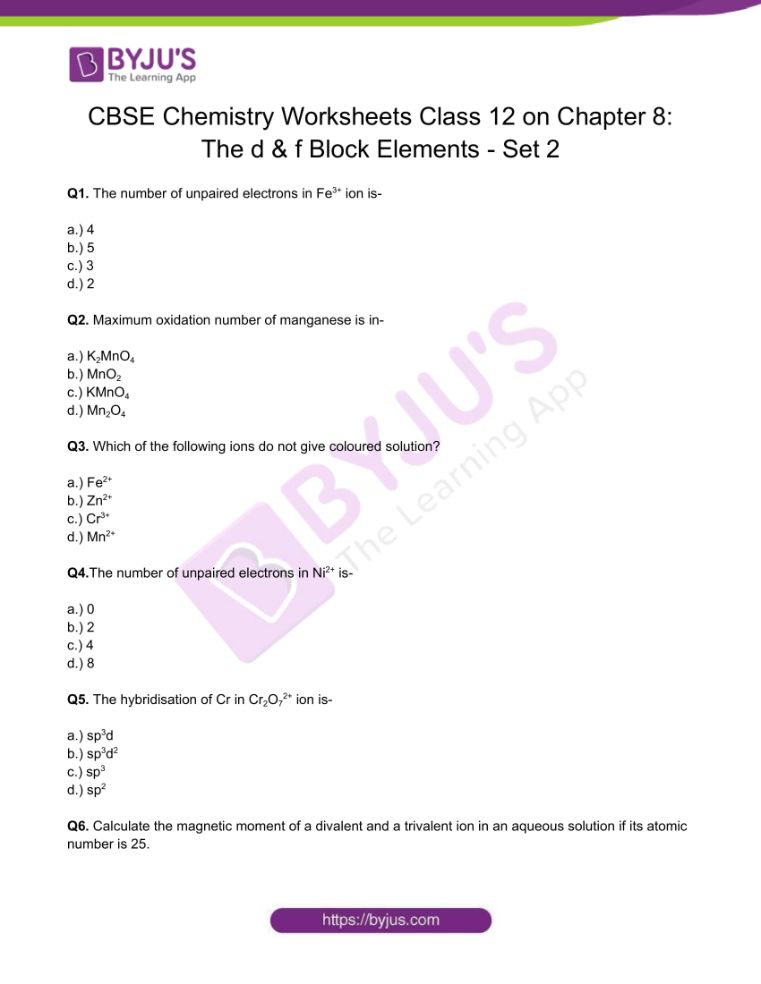 Q1. The number of unpaired electrons in Fe3+ ion is-

Q2. Maximum oxidation number of manganese is in-

Q3. Which of the following ions do not give coloured solution?

Q4.The number of unpaired electrons in Ni2+ is-

Q6. Calculate the magnetic moment of a divalent and a trivalent ion in an aqueous solution if its atomic number is 25.

Q7. Which is a stronger reducing agent Cr+2 or Fe2+ and why?

Q8. Write down the electronic configuration of:

a.) The oxidizing power of oxoanions are in order

b.) The third ionization enthalpy of manganese (Z=25) is exceptionally high.

Q11. Why is the highest oxidation state of a metal exhibited in its oxide or fluoride only?

b.) Zinc is not regarded as a transition metal.

c.) Transition elements and their compounds are generally found to be good catalysts in chemical reactions.

a.) The enthalpy of atomization of the transition metals is high.

b.) The lowest oxide of a transition metal is basic while the highest is amphoteric or acidic.

c.) Cobalt (II) is stable in an aqueous solution but in the presence of complexing agents, it is easily oxidized.

Q14. Describe the preparation of-

a.) Potassium dichromate from sodium chromate.

Q16. Differentiate between lanthanoids and actinoids.

a.) Name the element of 3d transition series which shows maxium number of oxidation states. Why does it show so?

b.) Which transition metal of 3d series has positive E°(M+|M) vale and why?

c.) Out of Cr3+ and Mn3+, which is a stronger oxidizing agent and why?

d.) Name a member of the lanthanoid series which is well known to exhibit +2 oxidation state.

Q18. The elements of 3d transition series are given as:

a.) Write the element which is not regarded as a transition element. Give reason.

b.) Which element has the highest melting point?

c.) Write the element which can show an oxidation of +1.

d.) Which element is a strong oxidising agent in +3 oxidation state and why?

Q19. a.) Give the general electronic configuration of d-block elements.

b.) Silver has completely filled d-orbitals (4d10) in its ground state. Yet, it is considered as a transition element. Why?

c.) Cu+ ion is not stable in aqueous solution. Explain.

Q20. a.) Which of the first row transition metal exhibits +7 oxidation state?

b.) How would you account for the irregular variation of 1st and 2nd ionisation enthalpies in the 1st series of transition elements?

c.) What are interstitial compounds?