Electroplating is basically the process of plating a metal onto the other by hydrolysis mostly to prevent corrosion of metal or for decorative purposes. The process uses an electric current to reduce dissolved metal cations to develop a lean coherent metal coating on the electrode. Electroplating is often applied in the electrical oxidation of anions on a solid substrate like the formation of silver chloride on silver wire to form silver chloride electrodes.

Electroplating is majorly applied to modify the surface features of an object (e.g corrosion protection, lubricity, abrasion), but the process can also be used to build thickness or make objects by electro forming.

The Anode and Cathode

The electroplating process uses an anode and a cathode. In electroplating, the metal dissolved from the anode can be plated onto the cathode. The anode is provided with direct current, oxidizing and dissolving its metal atoms in the electrolyte solution. At the cathode, the dissolved metal ions are decreased and the metal is placed on the product.

How does Electroplating Work?

To understand the concept further, let’s take an example of a gold coating. In this instance, a layer of gold is to be electrodeposited on metallic jewellery to enhance its appearance.

The dissolved ions of gold are reduced at the cathode and plated on the jewellery.

However, there are major factors that influence the last plating. These include:

Talking about the uses of electroplating, apart from enhancing the appearance of the substrate it is used in various other purposes as well. The major application is to optimize a material’s resistance towards corrosion. The plated layer often serves as a sacrificial coating which reveals that it dissolves before the base substance. Some of the other common applications of electroplating involve: 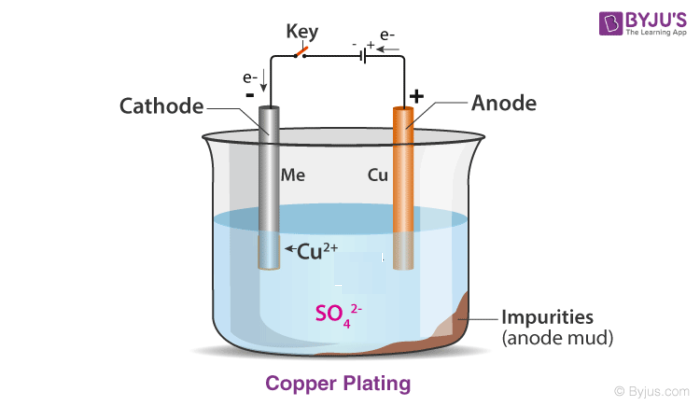 This process is influenced by a variety of factors. Some of these factors include the electrodes’ surface area, temperature, the type of metal and electrolyte used, and the magnitude of the applied current. The factors that influence the electroplating process will be investigated in this essay.

Where is electroplating used?

Electroplating is widely used in industry and the decorative arts to improve object surface qualities such as abrasion and corrosion resistance, lubricity, reflectivity, electrical conductivity, and appearance.

What is the main principle of electroplating?

Electroplating is the method of depositing one metal over another in the presence of a metal salt (in aqueous solution). The water molecule is released as the final product in this process. As a consequence, electroplating is based on the theory of hydrolysis.

What acid is used for electroplating?

To know more about operations involved in electroplating process along with its applications in different fields, you can download BYJU’S – The Learning App.