What is Henry’s Law?

Henry’s law is a gas law which states that at the amount of gas that is dissolved in a liquid is directly proportional to the partial pressure of that gas above the liquid when the temperature is kept constant. The constant of proportionality for this relationship is called Henry’s law constant (usually denoted by ‘kH‘). The mathematical formula of Henry’s law is given by:

Pepsi and other Carbonated Drinks

Henry’s law comes into play every time a bottle of Pepsi (or any other carbonated drink) is opened. The gas above the unopened carbonated drink is usually pure carbon dioxide, kept at a pressure which is slightly above the standard atmospheric pressure. As a consequence of Henry’s law, the solubility of carbon dioxide in the unopened drink is also high.

When the bottle is opened, the pressurized CO2 escapes into the atmosphere (which is usually accompanied by a hissing sound). As the partial pressure of CO2 in the atmosphere above the drink rapidly decreases, the solubility of the carbon dioxide in the drink also decreases (due to Henry’s law). This causes the dissolved CO2 to come to the surface of the drink in the form of tiny bubbles and escape into the atmosphere.

Respiration and the Oxygenation of Blood

In the process of respiration, inhalation is accompanied by an increase in the partial pressure of oxygen in the alveoli. When deoxygenated blood interacts with the oxygen-rich air in the alveoli, the following gas-exchanges take place as a consequence of Henry’s law:

Thus, Henry’s law plays an integral role in the respiration of many organisms. 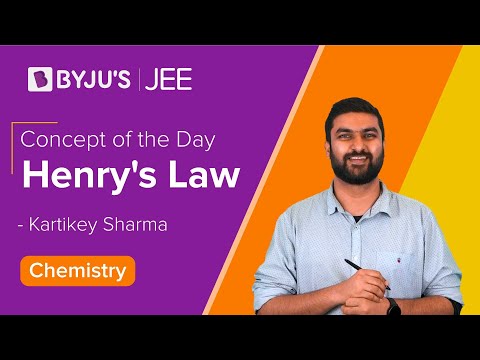 The value of the Henry’s law constant of a gas is dependent on the following factors:

Calculate the solubility of gaseous oxygen in water at a temperature of 293 K when the partial pressure exerted by O2 is 1 bar. (Given: kH for O2 34840 bar.L.mol-1)

Therefore, the solubility of oxygen in water under the given conditions is 2.87*10-5 M.

Henry’s Law does not apply to which gas? Why?

What are the conditions for using Henry’s Law?

Henry’s law is only applicable when the molecules are in equilibrium. Henry’s law does not apply to gases at high pressures (for example, N2(g) at high pressure becomes very soluble and dangerous when introduced into the blood supply).

What does Henry’s law constant depend on?

What is the unit for Henry’s law constant?

What are the Limitations of Henry’s Law?

The limitations of Henry’s law are as follows:

To learn more about Henry’s law and other important gas laws such as Avogadro’s law, register with BYJU’S and download the mobile application on your smartphone.

Take up a quiz on Henry's Law
Q5