Class 11 chemistry important 5 mark questions with answers are provided here. These important questions are based on CBSE board curriculum and correspond to the most recent Class 11 chemistry syllabus. By practising these Class 11 important 5 mark questions, students will be able to quickly review all of the ideas covered in the chapter and prepare for the Class 11 Annual examinations as well as other entrance exams such as NEET and JEE.

Download Class 11 Chemistry Important 5 Mark Questions with Answers PDF by clicking on the button below.

A combination of mono-di and trimethyl chlorosilanes, as well as a minor quantity of tetramethylsilane, is generated when silicon combines with methyl chloride in the presence of copper at a high temperature (such as 537K). Methyl substituted chlorosilanes MeSiCl3, Me2SiCl2, Me3SiCl and Me4Si are formed.

CO is heated with ZnO because CO is a reducing agent that reduces ZnO to Zn when it reacts with it.

This reaction is the Preparation of Diborane (B2H6).

When Boron trifluoride is heated with Sodium Hydride at 450 K, Diborane is formed. This is how Diborane is made in the industrial world.

Diborane is a flexible and highly reactive reagent with a wide range of uses. It forms hydrogen and boric acid when it reacts forcefully with water:

Explain giving reasons for the following:

Because the total energy required to manufacture B3+ is equal to the sum of all ionisation enthalpies, it takes a tremendous amount of energy to create it.

The reaction is nonspontaneous since G is positive.

(b) Write the chemical reaction involved in Kolbe’s electrolytic process. What are the products formed at cathode and anode?

Compound A produces cis isomer when it reacts with hydrogen in the presence of Lindlar’s catalyst (Pd/ C).

When compound A reacts with sodium in liquid ammonia, the trans isomer is formed. 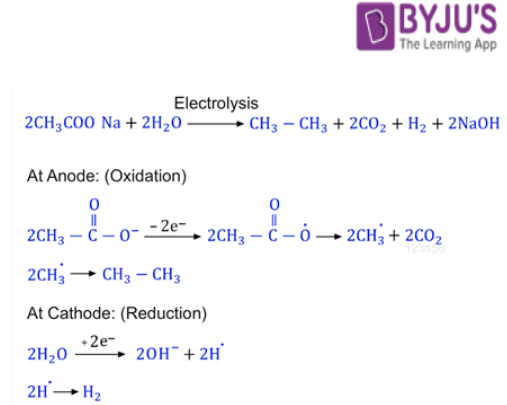 Water molecules break down near the cathode, forming hydrogen and hydroxyl ions. A hydrogen molecule is formed when two hydrogen ions unite to produce a gas. Sodium acetate molecules initially create acetate and sodium ions at the anode.

Define the compressibility factor? Explain how the function PV/RT (Z) can be used to show gases behave non-ideally at different pressures.

The number of moles of an ideal gas in the sample is equal to the PV/RT ratio. For all pressure, volume, and temperature conditions, this number should remain constant. The gas sample is not behaving optimally if the value of this ratio changes with increasing pressure.

In the long form of the periodic table, the elements are divided into four groups. The s, p, d, and f-block elements are the ones in question. The name of the orbitals that receive the last electron is used to classify them.

For example, 1s1 and 1s2 electrical configurations for Hydrogen and Helium

Similarly, d and f-block elements are elements in which the valence shell electron reaches the d and f-orbitals, respectively.

The same orbital elements exhibit similar properties as a result of this categorisation. As a result, all objects with similar attributes and behaviours are grouped together to make learning easier.

a) What is meant by the molarity of a solution? What are its units?

b) Calculate the molarity of H2SO4 in the solution prepared by dissolving 49 grams of it in enough water to form 250 mL of the solution.

The most popular method of representing the concentration of a solution is molarity.

(b) Molarity = moles/volume in litres

(b) Write the total structural isomers possible for C4H10O

The displacement of sigma electrons towards more electronegative species is known as the inductive effect. A chain of C atoms is used to transform it. It is divided into two categories: +I effect and -I effect. Alkyl groups, which release electrons, have a +I effect. Electron-withdrawing groups such as nitro, cyano, halo, amino, and others exhibit the -I effect.

The electromeric effect is a transient process that involves the transfer of pi electrons from attacking reagents to more electronegative species due to the demand of assaulting reagents. Compounds with C=C, C=N, or N≡N groups demonstrate this effect, which is more potent than the inductive effect. It is divided into two types: + E and -E effects.

(b) C4H10O is made up of seven isomers. Four of the seven isomers are alcohol, whereas the other three are ether. 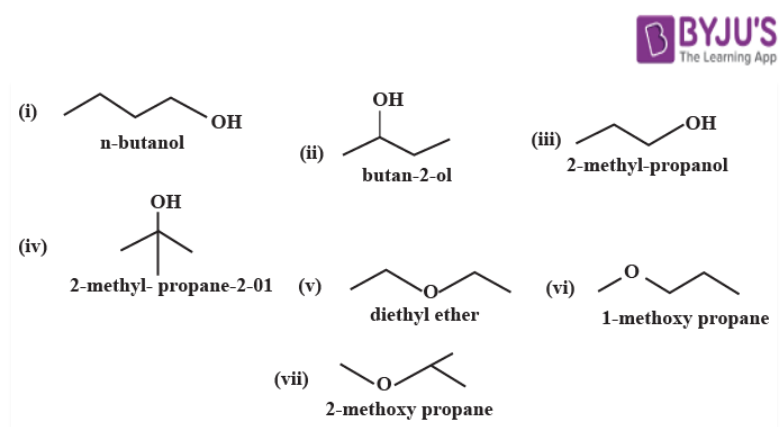 Define ionic bond. Explain the factors that influence the formation of an Ionic bond with suitable examples.

Ionic bonding produces ionic, or electrovalent, compounds, such as those generated between non-metals and alkali and alkaline-earth metals. The ions in these ionic crystalline solids are organised in such a way that the positive and negative charges alternate and balance one another, with the total charge of the substance remaining zero.

The formation of ionic bonds is primarily influenced by three factors. They are as follows:

It is the amount of energy necessary to remove the most loosely attached electron from an element’s isolated gaseous atom. The easier it is to create a cation when the ionisation energy is low.

When an electron is added to an isolated gaseous atom of an element, the quantity of energy released is specified. The easier it is to generate an anion, the more energy is released during this process.

Thus, a metal atom’s low ionisation energy and a nonmetal atom’s strong electron affinity encourage the creation of an ionic bond between them.

The amount of energy released when cations and anions are moved from infinity to their respective equilibrium positions in the crystal lattice to create one mole of the ionic compound is defined as lattice energy. The greater the tendency for an ionic bond to form, the higher the lattice energy. The greater the force of attraction between the ions, the higher the charges on the ions and the smaller the space between them.

What are quantum numbers? What permitted values can these have? Explain their significance.

There are four quantum numbers:

b) Give mechanism of addition of HBr to propene.

Benzene can be transformed to p-nitrobromobenzene through electrophilic aromatic substitution with bromine in the presence of ferric bromide. Fractional distillation separates ortho-bromonitrobenzene and para-bromo nitrobenzene after nitration with concentric nitric acid and concentric sulphuric acid. 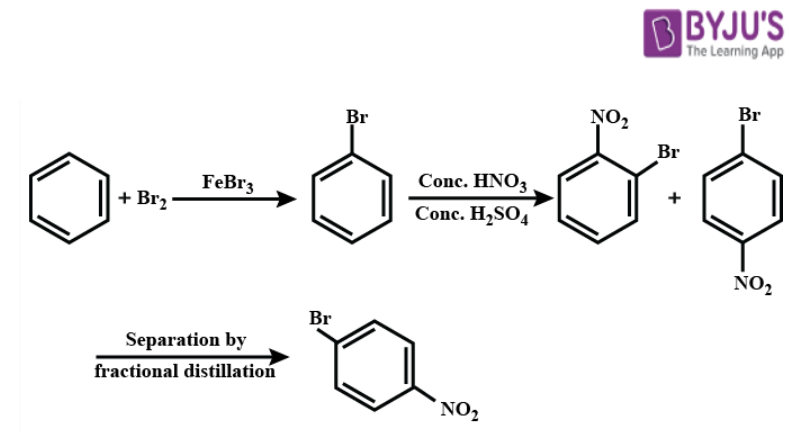 Conversion of Ethyl chloride to ethene is an Elimination reaction.

Br is more electronegative than H in HBr. Polarity is created when bound electrons travel towards Br, resulting in the formation of electrophile H+, which attacks the double bond to form a carbocation. 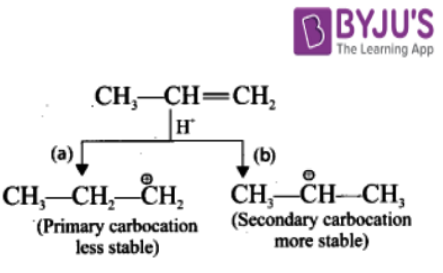 The Br-1 ion attacks the 2°- carbocation, resulting in the formation of 2- Bromo propane as the main product. Friedel-Crafts reactions are organic coupling reactions that use an electrophilic aromatic substitution to attach substituents to aromatic rings. Alkylation and acylation are the two main forms of Friedel-Crafts processes. French chemist Charles Friedel and American chemist James Crafts invented these reactions in 1877.

This reaction can’t utilise the carbocations generated by aryl and vinyl halides because they’re too unstable. To avoid polyalkylation in these processes, a large amount of the aromatic component must be utilised (addition of more than one alkyl group to the aromatic compound).

The Friedel-Crafts alkylation reaction does not include aromatic compounds that are less reactive than mono-halobenzenes. It’s important to remember that this reaction, like any other involving carbocations, is susceptible to carbocation rearrangements.

Balance the following equation in the acidic medium by the half-reaction method.

To begin, balance the equations in terms of electrons.

In the oxidation process, the oxygen atoms are not balanced. To counteract this, add as many water molecules to the right as the total oxygen to the left requires. Then, on the left side of the equation, add hydrogen ions to balance the number of hydrogen atoms injected with the water molecules.

By combining the two half-reactions, the electrons on either side of the equation are now equal.

(a) Give one method for industrial preparation and one for laboratory preparation of CO and CO2 each.

i) form the most acidic dioxide

ii) are used as semiconductors.

(c) Explain the structure of Diborane

At 373, concentrated sulphuric acid is used to dehydrate formic acid.

When steam is passed over hot coke, carbon monoxide is produced.

Carbon dioxide preparation in the laboratory:

ii) Silicon and germanium are used as semiconductors. The Diborane molecule is made up of four hydrogen atoms and two boron atoms that are all in the same dimension. Two separating hydrogen atoms are known to exist between these planes.

a) Benzene to Benzoic acid

(a) Benzene to Benzoic acid

By first turning benzene to toluene via Freidel Craft’s alkylation reaction, benzene can be converted into benzoic acid.

To produce benzoic acid, toluene is oxidised in the presence of an oxidising agent such as potassium permanganate.

To convert ethene to propene, we need to increase one carbon in the chain because ethene has 2 carbons whereas propene has 3 carbons.

Alkyl halide (HBr) is the mother compound to increase carbon in a chain.

Ethene will react with HBr and we will get 1-bromoethane.

1-bromoethane is treated with KCN to give propane nitrile.

Propane nitrile is then converted to propylamine when treated with LiAlH4.

When treated with NaNO2 and HCl, propylamine is converted to propanol.

This conversion is broken down into four steps.

Step 1: When ethyne reacts directly with water in the presence of mercury(II) salts, the result is ethanal.

Step 3: Now, ethanoic acid reacts with NaOH and vaporises to dryness before being heated gently to produce anhydrous sodium acetate.

Step 4: The methane is then produced by heating anhydrous sodium acetate with soda lime.

Propene is converted to propan–2–ol when it is treated with water in the presence of an acid catalyst.

Write the balanced ionic equation for the reaction of permanganate ion with bromide ion in a basic medium to give manganese dioxide and bromate ion.

Manganese dioxide and bromate ion are formed when permanganate ion combines with bromide ion in a basic media. The balanced chemical equation is:

The ion-electron technique is used to obtain the final reaction. Another way for balancing reactions is to use the oxidation number method.

Step 1: The skeletal equation for the given reaction is: 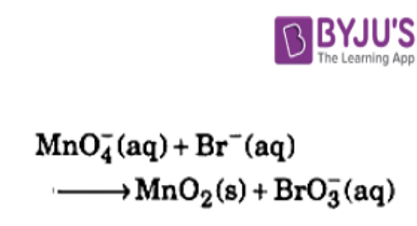 Step 3: H2O molecules are used to balance out the O atoms.