Download Class 11 Chemistry Chapter 12 – Organic Chemistry Some Basic Principles and Technique Important Questions with Answers PDF by clicking on the button below.

Based on the structure (I to VII), Answer the questions given below. 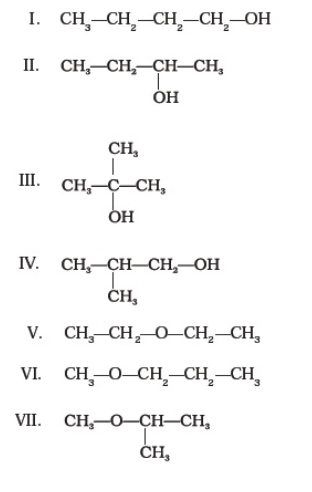 Q1. Which of the above compounds form pairs of metamers?

V and VI, VI and VII and V and VII form pairs of metamers because they have different alkyl chains on either side of ethereal oxygen (-O-).

Q2. Identify the pairs of compounds which are functional group isomers.

Q3. Identify the pairs of compounds that represents position isomerism.

I and II, III and IV, VI and VII are position isomers as they have different positions of -OH group and -O- group.

Q4. Identify the pairs of compounds that represent chain isomerism.

Compounds I and III, I and IV, II and III and IV represent chain isomerism.

Q5.For testing halogens in an organic compound with AgNO3 solution, sodium extract (Lassaigne’s test) is acidified with dilute HNO3. What will happen if a student acidifies the extract with dilute H2SO4 in place of dilute HNO3?

Q7. Explain, how is the electronegativity of carbon atoms related to their state of hybridisation in an organic compound?

Since s-electrons are more firmly attached by nucleus than p-electrons, therefore, electronegativity increases as the s-character of the hybridised orbital increases, i.e., in the order

Q8. Show the polarisation of carbon-magnesium bonds in the following structure.

Carbon is more electronegative than magnesium; therefore, Mg has a partial positive charge, and C has a partial negative charge because bonded pairs of electrons are attracted more towards carbon.

Q10, Which of the following selected chains is correct to name the given compound according to the IUPAC system.

The 4-carbon chain is the correct chain for the IUPAC name since it contains the maximum number of functional groups (two) while the rest have only one functional group.

Q11. In DNA and RNA, nitrogen atoms are present in the ring system. Can Kjeldahl method be used for the estimation of nitrogen present in these? Give reasons.

Q12. If a liquid compound decomposes at its boiling point, which method (s) can you choose for its purification. It is known that the compound is stable at low pressure, steam volatile and insoluble in water.

If the compound decomposes at its boiling point, steam is volatile and insoluble in water and stable at low pressure. Steam distillation can be used for its purification.

Q13. Draw the possible resonance structures for CH-O-CH2+, and predict which of the structures is more stable. Give a reason for your answer.

The resonance structures are :

Structure (II) is more stable because both the carbon & oxygen atoms have an octet of electrons (shared pairs/lone pair).

Q14. Which of the following ions is more stable? Use resonance to explain your answer.

Q15. The structure of triphenylmethyl cation is given below. This is very stable and some of its salts can be stored for months. Explain the cause of the high stability of this cation.

Therefore, triphenyl methyl cation is relatively stable and is isolated from its solution in the solid state. And we can even store some of its for months.

Q16. Write structures of various carbocations that can be obtained from 2-methylbutane.

Arrange these carbocations in order of increasing stability.

We can obtain four structures from 2-methylbutane.

Q17. Three students, Manish, Ramesh and Rajni were determining the extra elements present in an organic compound given by their teacher. They prepared the Lassaigne’s extract (L.E.) independently by the fusion of the compound with sodium metal. Then they added solid FeSO4 and dilute sulphuric acid to a part of Lassaigne’s extract. Manish and Rajni obtained

prussian blue colour but Ramesh got red colour. Ramesh repeated the test with the same

Lassaigne extract but again got red colour only. They were surprised and went to their

teacher and told him about their observation. The teacher asked them to think over the

the chemical equations to explain the formation of compounds of different colours.

In Lassaigne’s test, SCN– ions are formed due to the presence of sulphur and nitrogen. These give red colour with Fe3+ ions. With an excess of sodium, the thiocyanate ion, if formed, is decomposed.

Q18. Name the compounds whose line formulae are given below :

Q20. Draw the resonance structures of the following compounds. 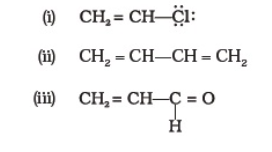 The resonance structures of the following compounds are.

Q21. Identify the most stable species in the following set of ions giving reasons

(i) CH3+ is the most stable species because replacing H atom by Br (-Inductive effect) increases +ve charge on carbon atom and destabilised the species.

(ii) –CCI3 is most stable because the -ve charge on the carbon atom is dispersed due to the -I effect of Cl. More Cl atoms correspond to more dispersal of-ve charge and thus more stabilisation.

Q22. Give three points of differences between inductive effect and resonance effect.

Q23. Which of the following compounds will not exist as a resonance hybrid. Give reason for your answer

(i) CH3OH does not contain pi-electrons; hence, it cannot exist as a resonance hybrid.

(ii) Due to the presence of pi-electrons in C = O bond and lone pair of electrons on N amide can be represented by the following resonating structures.

(iii) In CH3CH=CHCH2NH2, the lone pair of electrons on the nitrogen atom is not conjugated with the pi -electrons. Therefore, resonance is not possible.

Q24. Why does SO3 act as an electrophile?

Three highly electronegative oxygen atoms are attached to the sulphur atom. It makes sulphur atom electron deficient. Due to resonance, sulphur also acquires a positive charge. Both these factors make SO3 an electrophile.

Q25. Resonance structures of propenal are given below. Which of these resonating structures is more stable? Give a reason for your answer.

Structure I, propenal, is more stable than structure II because it has more covalent bonds in its resonating structures. In contrast, Structure II has only six electrons on its terminal carbon, making it less stable.

Q26. Alcohol (boiling point 97°C) was mixed with a hydrocarbon (boiling point 68°C) by mistake. Suggest a suitable method to separate the two compounds. Explain the reason for your choice.

Q27. Which of the two structures (A) and (B) given below is more stabilised by resonance?

Both CH3COOH and CH3COO– ion exhibit resonance as follows:

Structure (B) is more resonance stabilised since both the contributing structures for the carboxylate ion are equivalent.

Structure [A] is comparatively less stabilised since the contributing structures for the carboxylic acid are not equivalent.

Q1. What is meant by hybridisation? Compound CH2 = C = CH2 contains sp or sp2 hybridised carbon atoms. Will it be a planar molecule?

The atomic orbitals combine to form a new set of equivalent orbitals known as hybrid orbitals. Unlike pure orbitals, hybrid orbitals are used in bond formation. The phenomenon is known as hybridization, which can be defined as the process of intermixing the orbitals of slightly different energies to redistribute their energies, resulting in forming a new set of orbitals of equivalent energies and shape.

Carbon atom three are sp2 hybridized as each one has 3σ bonds while carbon atom 2 has 2σ bonds, and it is sp hybridized. Thus, CH2 = C = CH2 (allene) as a whole is non-planar.

Q2. Benzoic acid is an organic compound. Its crude sample can be purified by crystallisation from hot water. What characteristic differences in the properties of benzoic acid and the impurity make this process of purification suitable?

Benzoic acid can be purified by hot water because of the following characteristics.

(i) Benzoic acid is more soluble in hot water and less soluble in cold water.

(ii) Impurities in benzoic acid are either insoluble in water or more soluble in water to such an extent that they remain in solution as the mother liquor upon crystallisation.

Fractional distillation is used to separate the components of a mixture if their boiling points differ by 20∘ or less. In this method, a fractionating column is used in between the flask and the condenser. The fractionating column aims to provide hurdles for the ascending vapours and provide ample surface area for condensing the high boiling liquid. Consequently, the low boiling liquid (A) vapours will move up while those of the high boiling liquid will condense and fall back into the flask. As a result of this fractionation, liquid A with a lower boiling point will distil first, and liquid B with a higher boiling point afterwards.

Q4. You have a mixture of three liquids A, B and C. There is a large difference in the boiling points of A and the rest of the two liquids i.e., B and C. Boiling points of liquids B and C are quite close. Liquid A boils at a higher temperature than B and C and the boiling point of B is lower than C. How will you separate the components of the mixture. Draw a diagram showing the setup of the apparatus for the process.

Now place the mixture of liquids B and C in a flask fitted with a fractionating column as shown in Fig. Since the b.p. of liquid B is lower than that of liquid C, therefore, on fractional distillation, first liquid B will distil over and then liquid C. When the liquids present in the mixture have their boiling points close to each other, separating pure liquids is difficult. The fractions collected are always contaminated. Repeated distillations further purify the fractions. To decrease the number of distillations, the separation is done by fitting the distillation flask with a fractionating column which, in turn, is connected to the condenser.

Various types of fractionating columns are given in Fig. Liquids forming a constant boiling mixture (azeotropic mixture) cannot be separated by this method. Fractional distillation is used these days in the industry, primarily in the distillation of petroleum, coal tar and crude alcohol. A mixture of methanol (b.pt. 338K) and propanone (b.pt. 330K) or a mixture of benzene and toluene may be separated by fractional distillation. Q6. A liquid with a high boiling point decomposes on simple distillation but it can be steam distilled for its purification. Explain how is it possible?