1. 18.0 g of water completely vapourises at 100°C and 1 bar pressure and the enthalpy change in the process is 40.79 kJ mol–1. What will be the enthalpy change for vapourising two moles of water under the same conditions? What is the standard enthalpy of vapourisation for water?

Standard enthalpy of vaporisation at 100℃ and 1 bar pressure,

2. One mole of acetone requires less heat to vapourise than 1 mol of water. Which of the two liquids has higher enthalpy of vapourisatIon?

Acetone requires less heat to vaporise due to the weak force of attraction between molecules.

As a result, water has a higher enthalpy of vaporisation.

It can be represented as:

3. Standard molar enthalpy of formation, ΔfHӨ is just a special case of enthalpy of reaction, ΔrHӨ. Is the ΔrHӨ for the following reaction same as ΔfHΘ ? Give reason for your answer. CaO(s) + CO2(g) → CaCO3(s); ΔfHӨ = –178.3 kJ mol–1

No, the ΔrHӨ for the given reaction is not same as ΔfHӨ.

The standard enthalpy change for the formation of one mole of a compound from its elements in their most stable states (reference states) is called standard molar enthalpy of formation, ΔrHӨ.

This reaction is different from the given reaction. Hence, ΔrHӨ ≠ ΔfHӨ.

4. The value of ΔfHӨ for NH3 is – 91.8 KJ mol–1. Calculate enthalpy change for the following reactIon:

However, two moles are decomposing here.

In general, if enthalpy of an overall reaction A→B along one route is ΔrH and ΔrH1, ΔrH2, Δr H3 ….. represent enthalpies of reaction leading to same product B through another route, then we have ΔrH =ΔrH1 + ΔrH2 + Δr H3 +…..

7. Use the following data to calculate Δlattice HӨ for NaBr.

According to Hess’s Law,

8. Given that ΔH = 0 for mixing of two gases. Explain whether the diffusion of these gases into each other in a closed container is a spontaneous process or not?

9. Heat has randomising influence on a system and temperature is the measure of average chaotic motion of particles in the system. Write the mathematical relation which relates these three parameters.

Heat has randomising influence on a system and temperature is the measure of average chaotic motion of particles in the system.

Yes, when the system and the surroundings are in thermal equilibrium, their temperatures are same.

For a spontaneous reaction, ΔrG° is -ve.

Hence, the reaction will be non spontaneous.

12. A sample of 1.0 mol of a monoatomic ideal gas is taken through a cyclic process of expansion and compression as shown in Fig. 6.1. What will be the value of ΔH for the cycle as a whole? 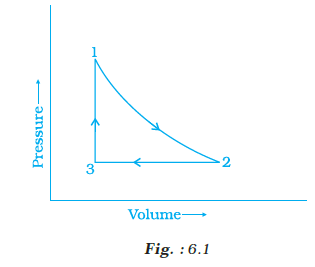 The change in internal energy during a cyclic process is zero.

As the system returns to its initial state, no work is said to have been done.

Enthalpy for a steady-state cyclic process is one single value at any given stage, but it varies at different stages.

The solid form of H2O is ice. In ice, molecules are less random than in liquid water.

15. The molar enthalpy of vaporization of acetone is less than that of water. Why?

Acetone lacks hydrogen bond, so intermolecular forces are weaker, causing it to boil/evaporate quickly, lowering the molar enthalpy of vaporisation. Furthermore, because acetone lacks a polar O-H bond, it has a low enthalpy. Water has both a non-polar region and a strong hydrogen bond.

16. Which quantity out of ΔrG and ΔrGӨ will be zero at equilibrium?

ΔrG will always be zero.

ΔrGӨ will be non zero for other values of K.

17. Predict the change in internal energy for an isolated system at constant volume.

There is no energy transfer as heat or work in an isolated system,

According to the first law of thermodynamics-

18. Although heat is a path function but heat absorbed by the system under certain specific conditions is independent of path. What are those conditions? Explain.

(i) At constant volume-

So, at a constant volume and at constant pressure heat change is a state function because it is equal to change in internal energy and change in enthalpy respectively which are state functions.

19. Expansion of a gas in vacuum is called free expansion. Calculate the work done and the change in internal energy when 1 litre of ideal gas expands isothermally into vacuum until is total volume is 5 litre?

By first law of thermodynamics-

20. Heat capacity (Cp) is an extensive property but specific heat (c) is an intensive property. What will be the relation between Cp and c for 1 mol of water?

For 1 mole of gas

22. If the combustion of 1g of graphite produces 20.7 kJ of heat, what will be molar enthalpy change? Free the significance of sign also.

The exothermic nature of the reaction is indicated by the negative sign of ΔH.

∴ Heat required for vapourisation of 284 g of CCl4

25. The enthalpy of reaction for the reaction:

What will be standard enthalpy of formation of H2O (l )?

or the standard enthalpy of formation of H2O (l) will be half of the given equation’s enthalpy, i.e., ΔrHΘ is also halved.

26. What will be the work done on an ideal gas enclosed in a cylinder, when it is compressed by a constant external pressure, pext in a single step as shown in Fig. 6.2. Explain graphically. Work done on an ideal gas can be calculated from p-V graph shown in Fig. 6.6. Work done is equal to the shaded area ABVIVII. 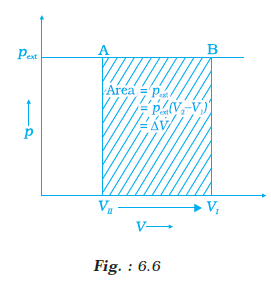 27. How will you calculate work done on an ideal gas in a compression, when change In pressure Is carried out in infinite steps?

A process or change is said to be reversible if it is carried out in such a way that the process can be reversed at any time by an infinitesimal change.

When pressure is not constant and changes occur in infinite steps (reversible conditions) during compression from initial volume, Vi to final volume, Vf, work done can be calculated using a pV-plot. The shaded area represents the work done on the gas. 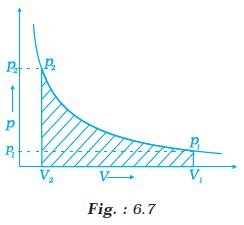 28. Represent the potential energy/enthalpy change in the following processes graphically.

(a) Throwing a stone from the ground to roof.

In which of the processes potential energy/enthalpy change is contributing factor to the spontaneity?

(a) When throwing a stone from the ground to the roof, we must provide energy to the stone.

(b) When heat is produced in a reaction, it indicates that the process is followed by a decrease in energy.

Energy increases in (a) part while decreasing in (b). As a result, in process (b), the enthalpy change is a factor that contributes to the spontaneity.

29. Enthalpy diagram for a particular reaction is given in Fig. 6.3. Is it possible to decide spontaneity of a reaction from given diagram. Explain. No, enthalpy is not the only criterion for spontaneity; we must also consider entropy. 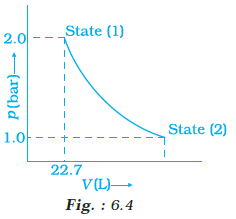 Since the process is carried out in an infinite number of steps, it is clear from the diagram that it is a reversible change.

31. An ideal gas is allowed to expand against a constant pressure of 2 bar from 10 L to 50 L in one step. Calculate the amount of work done by the gas. If the same expansion were carried out reversibly, will the work done be higher or lower than the earlier case? (Given that 1 L bar = 100 J).

Work done in the proess can be calculated as-

The negative sign indicates that the system is working on the environment. Because internal and external pressures are nearly equal at every step, the work done will be more in the reversible expansion.

1. Derive the relationship between ΔH and ΔU for an ideal gas. Explain each term Involved in the equation.

When heated, the volume of solids and liquids does not change significantly. As a result, if the volume changes, ∆V is insignificant.

When gases are involved in the reaction, the difference between the change in internal energy and the change in enthalpy becomes significant.

We know from the ideal gas equation that-

When one mole of an ionic compound dissociates into its ions, the enthalpy change related to this process is called lattice enthalpy.

Lattice enthalpy for NaCl can be calculated as follows-

i. Sublimation of sodium metal

iii. Dissociation of chlorine molecule, the reaction is half the bond dissociation enthalpy. 4. ΔG is net energy available to do useful work and is thus a measure of “free energy”. Show mathematically that ΔG is a measure of free energy. Find the unit of ΔG. If a reaction has positive enthalpy change and positive entropy change, under what condition will the reaction be spontaneous?

∆Hsys = Enthalpy change of a reaction

T∆Ssys = Energy which is not available to do useful work

Unit of ∆G is Joule.

The reaction will be spontaneous at high temperature.

5. Graphically show the total work done in an expansion when the state of an ideal gas is changed reversibly and isothermally from (pi, Vi ) to (pf, Vf ). With the help of a pV plot compare the work done in the above case with that carried out against a constant external pressure pf. (i) Reversible Work is represented by the combined areas

(ii) Work against constant pressure, pf is represented by the area