Download Class 12 Chemistry Chapter 16 – Chemistry in Everyday life Important Questions with Answers PDF by clicking on the button below.

Q1. What is the average molecular mass of drugs?

The average molecular mass of drugs is approximately 160 – 480 g/mol.

Q2. Write the uses of medicines.

Medicines are used to diagnose, prevent, and treat diseases.

We should not consume the medicine in a higher dose than those recommended; most of the drugs used as medicines are potential poisons.

Q3. What are antiseptics?

An antiseptic is a substance that stops or slows down the growth of microorganisms. They’re frequently used in hospitals and other medical settings to reduce the risk of infection during surgery and other procedures.

Q4. Which type of drugs comes under antimicrobial drugs?

Q5. Where are receptors located?

Q6. What is the harmful effect of hyperacidity?

Hyperacidity produces sudden stomach pain. It may lead to vomiting, loss of appetite, and heartburn. It is also responsible for chronic indigestion and, in severe cases, cause gastric ulcers.

Q7. Which site of an enzyme is called an allosteric site?

The allosteric site is the site that is not the active site where some drugs bind to an enzyme. Due to this, the enzyme’s shape changes, making it difficult for the substrate to recognise the enzyme’s active site.

Q8. What type of forces are involved in binding a substrate to the active site of an enzyme?

Substrates bind to the enzyme’s active site through a variety of interactions. These forces are van der Waal, ionic bonding, hydrogen bonding, or dipole-dipole interaction.

Q9. What is the commonality between the antibiotic arsphenamine and azo dye?

Q10. Which class of drugs is used in sleeping pills?

Tranquillizer is an essential component of sleeping pills.

Q11. Aspirin is a pain-relieving antipyretic drug but can prevent heart attack. Explain.

Aspirin is a pain-relieving antipyretic drug but can prevent a heart attack. It has anti-blood-clotting properties and prevents platelet coagulation.

Note: Aspirin is a non-narcotic analgesic, anti-inflammatory and antipyretic drug.

Q12. Antacids and anti-allergic drugs are antihistamines, but they cannot replace each other. Explain why?

Antihistamines are the drugs that control the allergy effects produced by histamine. Antacids are substances that neutralise gastric acidity. Antihistamine does not affect the secretion of acid in the stomach, and the reason is that both anti-allergic and antacid drugs work on different receptors.

Softsoap may refer to a liquid or easily soluble soap, usually made by saponification with potassium instead of the more typical sodium hydroxide.

Acid-base titration can be used to determine the excess amount of alkali in soap. The excess alkali left after hydrolysis of oil can be the source of alkalinity in soap.

Q15. Explain why sometimes foaming is seen in river water near the place where sewage water is poured after treatment?

Detergents persist in water even after sewage treatment and cause foaming in river water.

Q16. Which category of synthetic detergents is used in toothpaste?

Anionic detergents such as sodium or ammonium lauryl sulphate, sodium p-dodecyl benzenesulfonate etc., are used in toothpaste to clean the teeth to provide a foam that helps to carry away the debris.

Q17. Hair shampoos belong to which class of synthetic detergent?

Hair shampoos are made up of cationic detergents—for example, cetyltrimethylammonium bromide.

Q18. Dishwashing soaps are synthetic detergents. What is their chemical nature?

Dishwashing soaps are non-ionic detergents. It can be prepared by the reaction of stearic acid with polyethylene glycol.

Since non-ionic detergents do not contain any ion in their constitution, they are neutral.

Micelle is formed such that hydrophobic tails form the core and the hydrophilic part is immersed in the surrounding liquid. 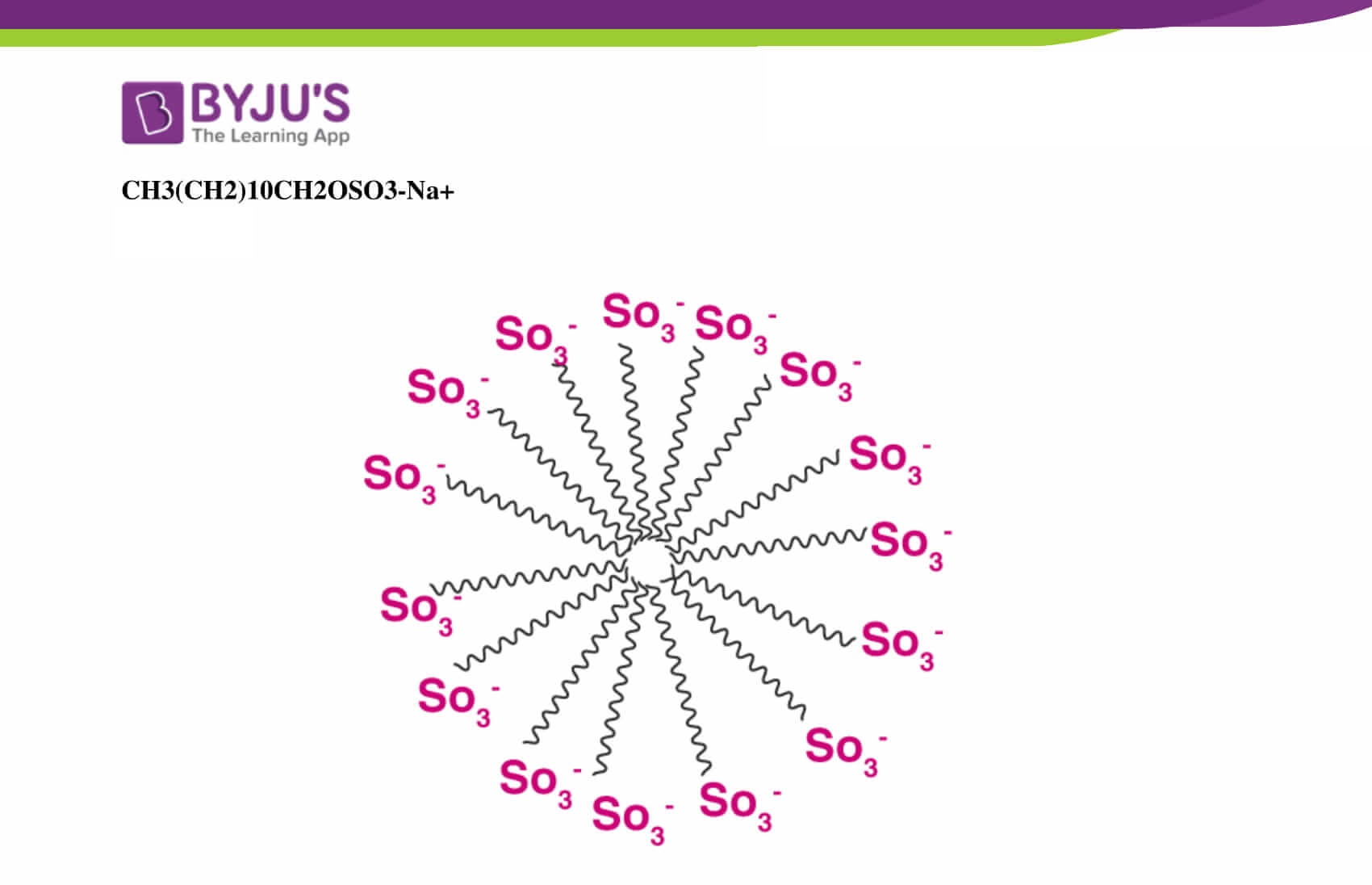 Q20. How does the branching of hydrocarbon chains of synthetic detergents affect their biodegradability?

Detergents having highly branched hydrocarbon chains cause pollution in rivers. The reason is that side chains stop bacteria from attacking and breaking the chains.

Since unbranched (i.e., straight) chains are more prone to attack by bacteria, in most of the detergents used these days, the breaching is kept to be minimum so that the detergents become readily biodegradable.

Q21. Why is it safer to use soap from an environmental point of view?

Soaps are biodegradable, while detergents containing branched hydrocarbon chains are pretty stable, i.e., the action of microorganisms does not degrade them, and therefore it causes water pollution in rivers and other waterways. Consequently, it is safer to use soap from an environmental point of view.

Q22. What are analgesics?

Q23. What is the scientific explanation for the feeling of depression?

Q24. What is the primary difference between antiseptics and disinfectants?

Disinfectants kill germs on non-living surfaces, while Antiseptics kill microorganisms on the skin.

Q25. Between sodium hydrogen carbonate and magnesium hydroxide, which is a better antacid and why?

Q26. Which analgesics are called opiates?

Q27. What is the medicinal use of narcotic drugs?

Narcotics are also called opioid pain relievers. When used carefully and under a health care provider’s direct care, these drugs can effectively reduce pain. They are used for severe pain and are not helped by other painkillers.

Q28. What is an antagonistic drug?

An agonist is a drug that binds to the receptor, producing a similar response to the intended chemical and receptor. Antagonists cause no opioid effect and block full agonist opioids. Examples are naltrexone and naloxone.

Q29. What is the mode of action of antimicrobial drugs?

There are six significant modes of action of antimicrobial drugs:

Q30. What are the side products of the soap industry? Give reactions showing soap formation.

Glycerol is the side product during soap formation.

The process of soap formation is referred to as saponification. It is the process that involves the conversion of fat or oil into soap and

Q31. What is the difference between bathing soap and washing soaps?

Q32. How are transparent soaps manufactured?

When dissolved in ethanol and subjected to evaporation, soaps are referred to as transparent soaps. It is a hot process soap that uses solvents to dissolve the soap crystal, allowing light to pass, creating transparency.

Q33. What is the advantage of using antihistamines over antacids to treat acidity?

Antihistamine prevents the binding of histamine with the receptors present in the stomach wall. As a result, less HCl is produced, and hyperacidity is cured. Thus, a better treatment for curing acidity is to use antihistamines than antacids.

Q34. What are the functions performed by histamine in the body?

Histamine is a potent vasodilator. It contracts muscles in the gut and bronchi. It relaxes some other muscles, e.g. in the walls of blood vessels. Histamine is also responsible for congestion in the nose associated with the common cold and allergies. Also, histamine stimulates the release of pepsin and hydrochloric acid in the stomach.

Q35. With the help of an example, how do tranquillisers control the feeling of depression?

Enzymes have active sites that bind the substrate for effective and quick chemical reactions. The functional groups present at the enzyme’s active site interact with functional groups of the substrate via ionic bonding, hydrogen bonding, van der Waals interaction, etc. Some drugs interfere with this interaction by blocking the enzyme’s binding site and preventing the binding of the actual substrate with the enzyme. This inhibits the catalytic activity of the enzyme. Therefore, these are called inhibitors.

Q37. What are filers, and what role do these fillers play in soap?

Substances that are added to soaps to change their properties to make them more useful for a particular application are called fillers.

(i) Sodium Rosinate, Sodium Silicate, Borax and Sodium Carbonate are added to laundry soaps to increase their lather forming ability.

Q38. Sugar is the primary energy source as it produces energy for metabolic decomposition. But these days, low-calorie drinks are more popular. Why?

Natural sweeteners, e.g., sucrose, add to calorie intake. Due to more cases of diabetes and obesity in young and older adults, these days, people usually take low-calorie drinks that do not metabolise nor produce any energy.

Q39. Pickles have a long shelf life and do not get spoiled for months. Why?

Q40. What is the difference between saccharin and saccharic acid?

Saccharin is an artificial sweetening agent with effectively no food energy. It is about 300-400 times as sweet as sucrose. Saccharic acid is a product of oxidation of Glucose and conc HNO3. Its salts are called glucarates. It is also called glucaric acid.

Q41. Name an artificial sweetener that is a derivative of sucrose.

Sucralose is a trichloro derivative of sucrose. Its appearance and taste are like sugar.

Q43. Aspartame is unstable at cooking temperature. Where would you suggest aspartame to be used for sweetening?

Since aspartame decomposes at cooking temperature, it is used as a sweetening agent in cold foods and soft drinks.

Q44. Sodium salts of some acids are beneficial as food preservatives. Suggest a few such acids.

Q45. Explain the role of allosteric sites in enzyme inhibition?

Q46. How are receptor proteins located in the cell membrane? 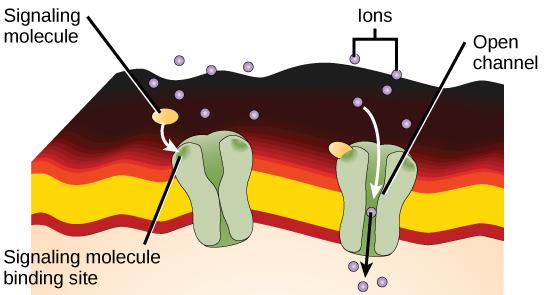 Q47. What happens when the bond formed between an enzyme and an inhibitor is a strong covalent bond?

If a strong covalent bond is formed between the enzyme and the inhibitor, which cannot break easily, the enzyme is blocked permanently. The body then degrades the enzyme-inhibitor complex and synthesises the new enzyme.

Q1. In what respect do prontosil and salvarsan resemble each other? Is there any resemblance between azo dye and prontosil? Explain.

Both Prontosil and Salvarsan have been classified under the same category, i.e. antibacterial (antimicrobial) drugs. Paul Ehrlich discovered them. The other name for Salvarsan is arsphenamine, and its molecule is organoarsenic.

There is a structural similarity between Prontosil and Salvarsan. Salvarsan contains – As = As – linkage, while prontosil contains – N = N – linkage.

There is a structural similarity between Prontosil and Azo dye. They both contain the same – N =N – linkage.

Q2. How do enzymes catalyse a chemical reaction in the living system? Explain drug target interaction using the example of an enzyme as a target.

Enzymes play the primary role in biochemical reactions as they are catalysts.

The enzyme catalyses proceeds as 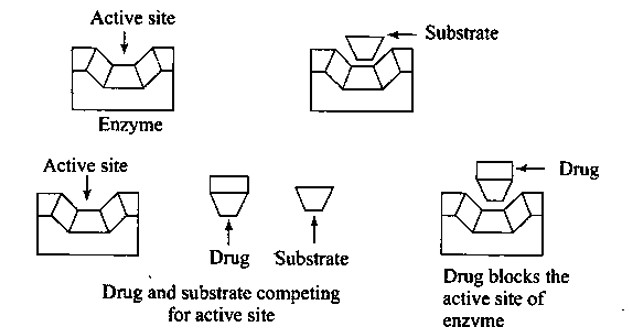 Synthetic detergents are cleansing agents that have all the properties of soaps but do not contain any soap. These can be used in soft as well as in hard water.

They are mainly classified into three categories

In these detergents, the anionic part of the molecule is involved in the cleansing action.

They are primarily used for household work. They are also used in toothpaste.

(2) Cationic Detergents: Cationic Detergents are quarternary ammonium salts of amines with acetates, chlorides or bromides as anions. The cationic part possesses a long hydrocarbon chain and a positive charge on the nitrogen atom. Cetyltrimethylammonium bromide is a popular cationic detergent and is used in hair conditions.

(3) Non-ionic Detergents: Non-ionic detergents do not contain any ion in their constitution. One such detergent is formed when stearic acid reacts with polyethylene glycol.

Q4. What are enzyme inhibitors? Classify them based on their mode of attachment on the active site of enzymes. With the help of diagrams explaining how inhibitors inhibit the enzymatic activity,

Enzyme inhibitors can block the binding of the substrate to the active site, hence inhibiting the enzyme’s catalytic activity.

Based on the attachment of a neutral substrate to the active site of enzymes, drugs inhibit in two different ways, as explained below.

(i) Drugs that compete with the natural substrate for their attachment on the active sites of enzymes are called competitive inhibitors.

(ii) Some drugs do not bind to the active site but to a different site of the enzyme, which is called an allosteric site. This binding of the drug at the allosteric site changes the effects of the activity of the enzymes in a way that the natural substrate cannot recognise. Such enzymes are called non-competitive inhibitors.