Download Class 9 Chemistry Chapter 3 Atoms and Molecules Important Questions with Answers PDF by clicking on the button below.
Download PDF

Q1. Which of the following represents a correct chemical formula? Name it.

(b), BiPO4 represents the correct formulae of bismuth phosphate.

Q2. Write the molecular formulae for the following compounds

(a) The molecular formula of Copper (I) bromide is CuBr2.

(b) The molecular formula of Aluminium (III) nitrate is Al(NO3)3.

(c) The molecular formula of Calcium (II) phosphate is Ca3(PO4)2.

(d) The molecular formula of Iron (III) sulphide is Fe2S3.

(e) The molecular formula of Mercury (I) chloride is HgCl2.

(f) The molecular formula of Magnesium (I) acetate is Mg(CH3COO)2.

Q3. Write the molecular formulae of all the compounds that can be formed by the combination of the following ions.

Q4. Write the cations and anions present (if any) in the following compounds

(a) The cation and anion present in CH3COONa are Na+ and CH3COO–.

(b) The cation and anion present in NaCI are Na+ and Cl–.

Q5. Give the formulae of the compounds formed from the following sets of elements

(a) Calcium and fluorine

(b) Hydrogen and sulphur

(a) The formulae of the compound formed by Calcium and fluorine is CaF2.

(b) The formulae of the compound formed by Hydrogen and sulphur is H2S.

(c) The formulae of the compound formed by Nitrogen and hydrogen is NH3.

(d) The formulae of the compound formed by Carbon and chlorine is CCl4.

(e) The formulae of the compound formed by Sodium and oxygen is Na2O.

(f) The formulae of the compound formed by Carbon and oxygen is CO2.

Q6. Which of the following symbols of elements are incorrect? Give their correct symbols

The correct formulas are enlisted below.

Q7. Give the chemical formulae for the following compounds and compute the ratio by mass of the combining elements in each one of them. (You may use appendix-III).

Q8. State the number of atoms present in each of the following chemical species

(d) There are two atoms in CO.

Q9. What is the fraction of the mass of water due to neutrons?

The mass of one water molecule = 18 amu.

So the mass of neutrons in one water molecule is eight amu.

Q10. Does the solubility of a substance change with temperature? Explain with the help of an example.

Example: You can dissolve more sugar in hot water than in cold water.

Q11. Classify each of the following based on their atomicity.

Q12. You are provided with a fine white coloured powder, either sugar or salt. How would you identify it without tasting it?

We can differentiate sugar and salt by

(a) Heating salts separately. Sugar will melt while salt will not.

Hence, there are half moles of magnesium in a 12 g magnesium ribbon.

Q1. Verify by calculating that

Q2. Find the ratio by mass of the combining elements in the following compounds. (You may use Appendix-III)

(a) The ratio of the mass of CaCO3

(b) The ratio of the mass of MgCl2

Q3. When dissolved in water, calcium chloride dissociates into its ions according to the following equation.

Calculate the number of ions obtained from CaCl2 when 222 g of it is dissolved in water.

Therefore, 1 mol of CaCl2 will give 3 moles of ions.

A sodium atom and ion differs by one electron.

For 100 moles each of sodium atoms and ions, there would be a difference of 100 moles of electrons.

1 molecule of HgS contains one atom of Hg

Or the earth is 2400 times heavier than a mole of the screw.

Q7. A sample of vitamin C is known to contain 2.58 x1024 oxygen atoms. How many moles of oxygen atoms are present in the sample?

As both containers are of the same mass, the mass of atoms will decide which will be heavier.

Q11. What is the SI prefix for each of the following multiples and submultiples of a unit?

Q12. Express each of the following in kilograms

A Mg2+ ion, and Mg atom differs by two electrons.

Q14. Which has more number of atoms?

Hence, NH3 would have more atoms than N2.

Q15. Compute the number of ions present in 5.85 g of sodium chloride.

Each NaCl particle contains one Na+ and one Cl− ion.

Q16. A gold sample contains 90% of gold and the rest copper. How many atoms of gold are present in one gram of this sample of gold?

The number of moles of Gold = Mass of Gold / Atomic mass of gold.

According to the mole concept,

Q17. What are ionic and molecular compounds? Give examples.

For one mole of Al3+ ion, three moles of electrons will be lost.

Q19. A silver ornament of mass ‘m’ gram is polished with gold equivalent to 1% of the mass of silver. Compute the ratio of the number of atoms of gold and silver in the ornament.

(a) In a chemical reaction, the sum of the masses of the reactants and products remains unchanged. This is called ______.

(a) In a chemical reaction, the sum of the masses of the reactants and products remains unchanged. This is called the Law of conservation of mass.

(b) A group of atoms carrying a fixed charge on them is called a polyatomic ion.

(d) Formula of sodium carbonate is Na2CO3, and that of ammonium sulphate is (NH4)2SO4.

Q22. Complete the following crossword puzzle (Fig. 3.1) by using the name of the chemical elements. Use the data given in Table 3.2. Q23. (a) In this crossword puzzle (Fig 3.2), the names of 11 elements are hidden. Symbols of these are given below. Complete the puzzle. 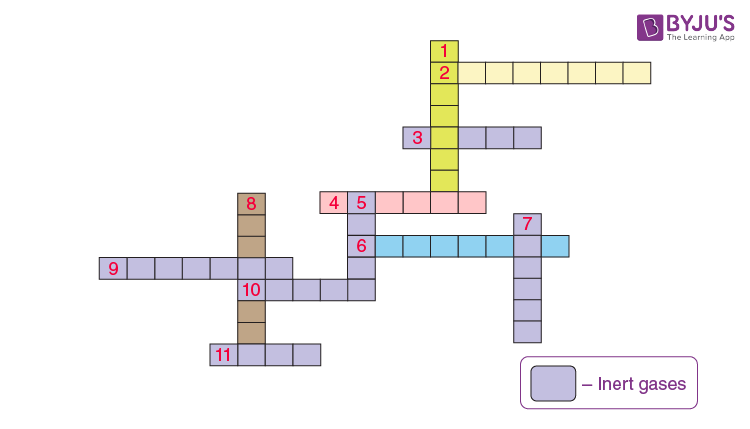 (b) Identify the total number of inert gases, their names and symbols from this crossword puzzle.

(b) There are five inert gases in this crossword puzzle. Their names and symbols are Argon (Ar), Xenon (Xe), Helium (He), Krypton (Kr) and Radon (Rn).

Q24. Write the formulae for the following and calculate the molecular mass for each of them.

(a) The formulae of Caustic potash is KOH.

(b) The formulae of Baking powder is NaHCO3.

(c) The formulae of Limestone is CaCO3.

(d) The formulae of Caustic soda is NaOH.

(e) The formulae of Ethanol is C2H5OH.

(f) The formulae of Common salt is NaCl.

Q25. In photosynthesis, six molecules of carbon dioxide combine with an equal number of water molecules through a complex series of reactions to give a molecule of glucose having a molecular formula C6H12O6. How many grams of water would produce 18 g of glucose? Compute the volume of water consumed, assuming the density of water to be 1g cm-3.

The given compound is aluminium sulphate.

Q2. What is an atomic mass unit’? How is it linked with relative atomic mass?

The relative atomic mass of an element is the number of times one atom of the element is heavier than the 1 / 12 times the mass of an atom of carbon-12.

Avogadro’s number is the number of particles (atoms, molecules or ions) present in one mole of any substance. It is known as Avogadro’s constant because its value is fixed (6.022 x 1023) irrespective of the nature of the particles.

Q4. Which are the six postulates of Dalton’s atomic theory?

1. The matter is composed of indivisible particles called atoms.

2. Atoms of the same element are similar in shape and mass but differ from the atoms of different elements.

3. Atoms can neither be created nor be destroyed.

5. Atoms of the same element can combine in more than one ratio to form two or more compounds.

6. The atom is the tiniest unit of matter that can take part in a chemical reaction.