What is Ionic Bond?

An ionic bond is formed when an atom donates electrons and another atom accepts that electron. These ions are then held together by strong electrostatic forces of attraction. The overall charge of the compound is neutral although it consists of positively charged ions known as cations and negatively charged ions known as anions. On the other hand, a covalent compound is formed by mutual sharing of valence electrons in order to obtain stability. The shared electrons are known as electron pairs or bond pairs.

In ideal situations we can say that a bond is hundred per cent ionic or covalent in nature. But in reality, no bond is completely ionic or covalent. If we take for an instance, the covalent hydrogen molecule, some ionic characters will be observed. There is a partial existence of covalent characters in an ionic bond which is discussed by Fajans in the following rule: 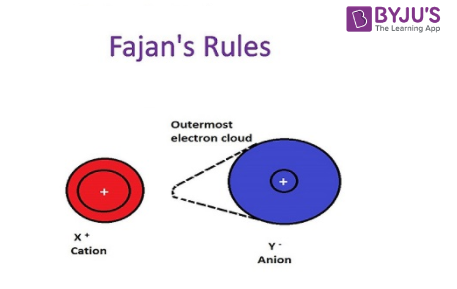 The cations polarize the anions and try to pull the electronic charge towards themselves and this increases the electronic charge between the two ions. This is exactly what happens in a covalent bond, that is an electron charge density is build up around the nuclei. The percentage covalent character in an ionic bond is determined by the polarization power of the cation, the polarizing ability of the anion and the distortion of anion taking place.

So far we have seen that no bond is perfectly ionic or covalent, there are covalent characters in an ionic bond and vice versa is also true. If you are curious to know more details on this topic, download BYJU’S – The Learning App.