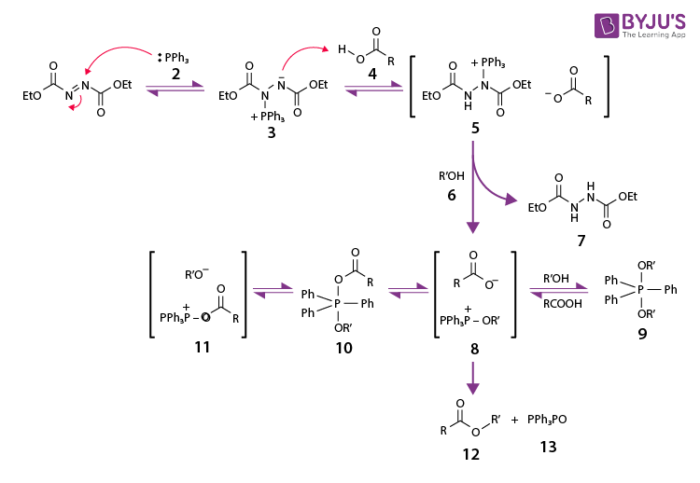 The reaction mechanism of the Mitsunobu reaction is a bit complex. The mechanism begins by forming a zwitter ionic intermediate on DEAD by an action of PPh3. The alcohol binds to the nucleophile and phosphonium ion to perform SN2 to yield the final substitution product.

The reaction has been applied in the synthesis of aryl ethers.

The conversion with DEAD with particular reactants fails as phenol is a weaker acid. Azo dicarbonyl di piperidine (ADDP) is used instead of it as a stronger base, wherein phosphine as polymer-supported triphenylphosphine PS-PPh3. This reaction is used to synthesize colchicine, quinine, morphine, sarain, eudistomin, stigma tellin, strychnine, nupharamine, and oseltamivir.

What are Named Reactions in Organic Chemistry?

The name reaction is a type of shorthand that avoids the need to provide a longer description of the characteristics of a specific interest transformation. It helps an informed listener to bring to mind the potential substrates, reaction conditions, by mentioning the word reaction.

What is Swarts reaction to give example?

In general, Swarts’ reaction is used to acquire alkyl fluorides from alkyl chlorides or alkyl bromides. This is accomplished in the presence of the fluoride of certain heavy metals by heating the alkyl chloride/bromide.

What are the types of organic reactions?

What is elimination reaction with example?

The type of atoms or groups of atoms leaving the molecule is frequently known to remove reactions. For example, the removal of a hydrogen atom and a halogen atom is known as dehydrohalogenation; when halogens are both leaving atoms, the reaction is known as dehalogenation.

Which kind of reaction is known as elementary reaction?