The use of colligative properties of solution in the determination of the molecular weight of various compounds has been one of the simplest methods. Since colligative properties of solutions depend only on the number of molecules of solute in them, this method is especially used for determining the molar masses of complex molecules, proteins, macromolecules, polymers.
A solution of known concentration of the substance is prepared in a solvent whose boiling point or freezing point or vapour pressure is known to us. The property to be measured is chosen in such a way that its measurement is simple and easy under the given conditions and do not vary considerably. 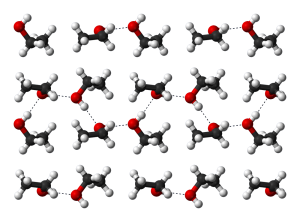 Let us consider the colligative properties one by one and molecular weight calculation based on these properties.

We know that the boiling point of a pure solvent rises when a non-volatile solute is added to it. This elevation in boiling point is proportional to the molal concentration of the solute in the solution. Mathematically it is given as:

Now we know that molality is the number of moles of solute per kilogram of the solvent. Let the weight of solute be w2 having molar mass M2 dissolved in w1 grams of solvent. Then molality can be given as:

So now, elevation of boiling point is given by:

Now if we rearrange the above equation, we get:

The above equation gives us a relation between molecular weight and the colligative property that is elevation in boiling point.

From the above description we now know that molality is given as:

Therefore,
Freezing point depression can be written as:

Now if we rearrange the above equation, we get:

Thus we can calculate the molar mass of a solute as per the above equation if we can measure the depression in freezing point of the solvent on addition of the solute.

Osmotic Pressure is the pressure applied to just stop the flow of solvent molecules through a semi-permeable membrane from a dilute solution to concentrated solution.

Mathematically it is given as:

So we can now write the osmotic pressure as:

Rearranging the above equation we get,

Thus we can calculate the molecular weight of a substance using the colligative properties of solutions. The three methods discussed above provide us with the options that are used based on the type of substance and the nature of the solvent and the degree of accuracy required during measurement. There is a lot more to colligative properties of solutions, log on to the YouTube channel of BYJU’S to explore the world of solutions.
Test Your Knowledge On Molecular Weight Determination Using Solution Colligative Properties!
Q5