What is Nuclear Energy?

Nuclear Energy is the energy in the core of an atom. Where an atom is a tiny particle that constitutes every matter in the universe. Normally, the mass of an atom is concentrated at the centre of the nucleus. Neutrons and Protons are the two subatomic particles that comprehend the nucleus. There exact massive amount of energy in bonds that bind atoms together.

Nuclear reactions cause changes in the nucleus of atoms which in turn leads to changes in the atom itself. Nuclear reactions convert 1 element into a completely different element. Suppose if a nucleus interacts with any other particles then separates without altering the characteristics of other nuclei than the process is called as nuclear scattering rather than specifying it as a nuclear reaction. This does not imply to radioactive decay.

One of the most evident nuclear reaction is nuclear fusion reaction that occurs in fissionable materials producing induced nuclear fission. 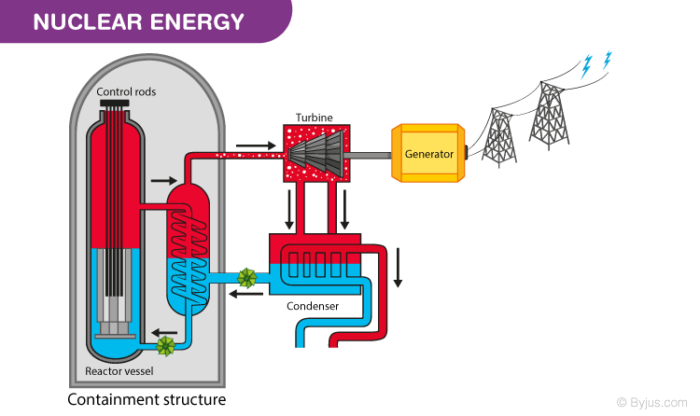 What is nuclear energy and examples?

What is nuclear energy in simple words?

Nuclear energy is the energy that is in an atom’s nucleus, or core. Atoms are small units of the universe that make up all matter, and energy is what binds together the nucleus. In an atom’s dense nucleus, there is an immense quantity of energy.

What are two types of nuclear energy?

For energy generation, there are two basic nuclear processes considered: fission and fusion. Fission is the energetic separation into two smaller atoms, or fission products, in massive atoms such as Uranium or Plutonium. You have to strike it with a neutron to break an atom.

What is nuclear used for?

Does nuclear energy harm the environment?

To learn more about the Nuclear Fuel Cycle and more, register with BYJU’S and download our app.