What is Optical Rotation?

The optical rotation is the angle through which the plane of polarization is rotated when polarized light passes through a layer of liquid.

A compound is said to be optically active when the linearly polarized light is being rotated when it is passing through it. The optical rotation is the angle through which the plane of polarization is rotated when polarized light passes through a layer of a liquid. Optical rotation is the effect which is determined by the concentration of chiral molecules and their molecular structure in a substance. Every optical active substance has its own specific rotation.

The optical rotation that is the rotation of the plane of polarized light is shown below.

The specific optical rotation of a liquid substance is the angle of rotation measured as specified in the monograph, calculated with reference to a layer 100mm thick and divided by the relative density measured at the temperature at which the rotation is measured.

A measure of the optically activity of a sample is the rotation produced for a 1mm slab for a solid or a 100mm path length for a liquid. This measure is called the specific rotation. Liquids usually rotate the light much less than solids. Solutions of solids will obviously show an effect that depends on the concentration of active material and to a small extent, both on temperature and the solvent.

The Formula of Optical Rotation

The rotation observed will clearly depend on the number of molecules exerting their effect that depends upon the concentrations. Observed rotations are thus converted into specific rotations that are a characteristic of the compounds according to the formula below. 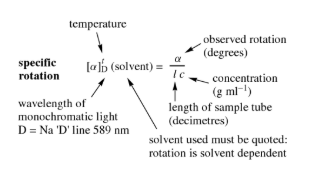 The Formula of Optical Rotation