POCl3 is an inorganic compound which is commonly referred to as phosphorous oxychloride or as phosphoryl chloride. At room temperature & pressure, this compound is a colourless liquid that forms fumes in moist air. These fumes are released because POCl3 undergoes hydrolysis in the presence of moisture to yield phosphoric acid and hydrogen chloride (which evolves as fumes).

The synthesis of POCl3 on an industrial scale is done by reacting phosphorus trichloride (PCl3) with oxygen or phosphorus pentoxide (P2O5). The primary application of this compound is in the preparation of certain phosphate esters (including tricresyl phosphate). It is important to note that POCl3 is not soluble in water since it reacts with it to form hydrogen chloride and phosphoric acid.

The oxidation of PCl3 (phosphorus trichloride) with dioxygen yields phosphorus oxychloride as the product. The chemical equation for this reaction is provided below.

Alternately, this compound can also be prepared from phosphorus trichloride by treating it with potassium chlorate. The chemical equation is:

POCl3 can also be prepared by reacting phosphorus pentachloride with phosphorus pentoxide. The balanced chemical equation for this reaction is given by:

POCl3 molecules feature 3 phosphorus-chlorine single bonds and one phosphorus-oxygen double bond. This molecule assumes a tetrahedral shape. The structure of a POCl3 molecule is illustrated below. 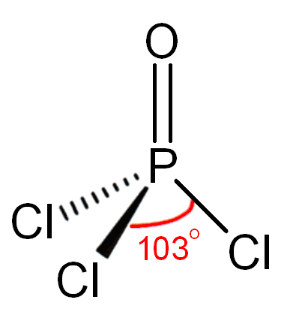 To learn more about POCl3 and other important phosphorus compounds, such as phosphorus triiodide, register with BYJU’S and download the mobile application on your smartphone.