Alcohols are compounds which contain one or more hydroxyl (-OH) groups directly attached to a carbon chain. Alcohols in the free-form are not a common occurrence in nature; they are found mainly in the essential or volatile oils obtained from flowers, leaves, and stems of the plants.

General Methods of Preparation of Alcohols

Alkyl halides when boiled with an aqueous solution of an alkali hydroxide give alcohol through nucleophilic substitution mechanism.

This general procedure produces primary and secondary alcohols. Glycerol can be synthesized from propylene by a series of reactions including the hydrolysis of a halide as one step in the process.

Direct hydration takes place by adding water in the presence of a catalyst.

Indirect hydration is achieved by the addition of sulphuric acid to alkane followed by hydrolysis of the alkyl hydrogen sulfate.

Lower molecular weight olefins react with carbon monoxide and hydrogen in the presence of a catalyst in a reaction called hydroformylation or the oxo reaction.

The resulting aldehyde is subsequently hydrogenated to form an alcohol. 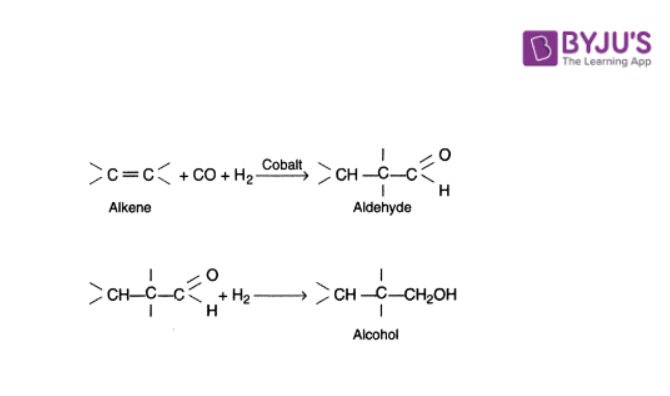 Alkenes, when treated with diborane, give alkyl boranes, R3B. Alkylboranes on oxidation with alkaline hydrogen peroxide give alcohol. 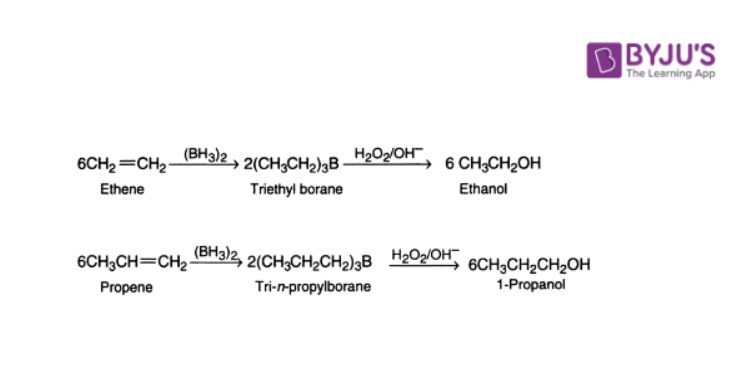 It is significant to note that this method always leads to anti-Markovnikov’s addition of water to alkenes.

All three types of alcohol (primary, secondary and tertiary) can be prepared from the Grignard reagents by interaction with suitable carbonyl compounds.

Give a chemical test to distinguish between Phenol and propanol.

On adding neutral FeCl3 to both compounds, phenol gives violet colouration while propanol does not.

Give a chemical test to distinguish between ethanol and dimethyl ether.

On adding I2/NaOH(aq) to both compounds, ethanol gives yellow precipitate while ether does not.

Give a chemical test to distinguish between 1-propanol and 2-methyl-2-propanol.

On adding HCl and ZnCl2 to both compounds, 2-methyl-2-propanol gives violet colouration while 1-propanol does not.

Arrange the following in increasing order of acidity: phenol, ethanol,water.

Why does propanol have a higher boiling point than that of butane?

Due to Hydrogen bonding in propanol.
Test Your Knowledge On Preparation Of Alcohols!
Q5