The basic hydrogen atom – a single proton circled by a single electron is also called protium.

Atoms of the same element can have different numbers of neutrons; the different possible versions of each element are called isotopes. The numbers of protons and electrons are the same for each isotope, as they define the element and its chemical behaviour.

The element symbol of an isotopes is

The shorthand writing of element symbol for the isotopes protium is

The most common isotope of hydrogen is protium (a hydrogen atom). A hydrogen atom is an atom of the chemical element hydrogen. The electrically neutral atom contains a single positively charged proton and a single negatively charged electron bound to the nucleus by the coulomb force. The most abundant isotope, hydrogen-1, protium or light hydrogen contains no neutrons, other isotopes of hydrogen such as deuterium contain one or more neutrons. 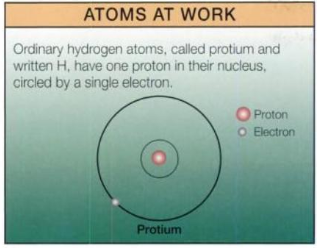 Protium on the Periodic Table

In the long form of periodic table also, hydrogen has been placed along with the elements of group 1 but slightly separated to indicate its distinctive character and thereby confirming the views of Mendeleeff. 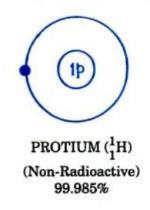 Protium is represented by the symbol H. Its atomic number is 1 and mass number is also 1. It has one proton in its nucleus and one electron in its 1s orbital. Naturally occurring hydrogen contains 99.985% of this isotope.

Hydrogen isotopes occupy the same position in the periodic table because all of them contain one proton each. Their chemical behaviour is similar because of the same electronic configuration. However, they differ in the physical properties which are mass dependent.

Atomic and Physical Properties of Protium

Some of the atomic and physical properties of the three isotopes are given below.

What is the use of Protium?

Protium contains pantoprazole which is the active ingredient. Protium is a selective “proton pump inhibitor,” a medication that reduces the amount of stomach acid produced. It is used to treat stomach and intestine acid-related illnesses.

Where is Protium found?

This has a total abundance in the oceans of ~156.25 ppm, which accounts for about 0.0156 percent of all hydrogen present on earth. The deuterium nucleus, called a deuteron, contains one proton and one neutron (mass number = 2), whereas the far more popular isotope of hydrogen, the protium, has no neutrons in the nucleus.

Why is Protium most abundant?

H (atomic mass 1.007825032241(94) u) is the most common isotope of hydrogen with an abundance of over 99.98%. Because the nucleus of this isotope consists of only one proton, the formal name protium is given. The proton was never observed to decay and thus, hydrogen-1 is considered a stable isotope.

Is Protium an isotope?

The atomic mass of Protium (hydrogen-1) is 1.00782504, which is a stable isotope. This possesses one proton and no neutrons. Sometimes called ordinary hydrogen is protein. Since the deuterium nucleus is twice as heavy as the protium, deuterium is also known as ‘super hydrogen.

Where is tritium from?

Tritium is a radioactive type of hydrogen that exists naturally, formed in the atmosphere when cosmic rays interfere with air molecules. Therefore, tritium is present worldwide in very low or trace concentrations in groundwater. This is also a by-product of the nuclear power plants producing electricity.

Test Your Knowledge On Protium!
Q5