Whenever a charge is placed in an electric or a magnetic field, it experiences a certain force acting on it or if multiple charges are placed, they experience an interaction due to another.

In the year 1870, James Maxwell became the first scientist to explain the interaction between the charges in the presence of electric and magnetic fields. He proposed that when electrically charged particles perform an accelerating motion, alternating electrical and magnetic fields are produced and transmitted. These fields traverse in the form of waves known as electromagnetic radiation. A light wave is an example of electromagnetic radiation. 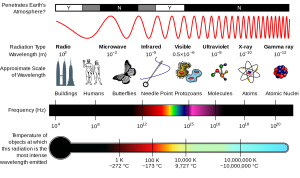 Apart from frequency and wavelength, some other parameters are also used to categorise electromagnetic radiation. One of these parameters is the wave number. Wave number is defined as the number of wavelengths per unit length. Mathematically, it is equal to the reciprocal of the wavelength. It is expressed in the SI unit as m-1.

What is the wave nature of electromagnetic radiation?

What is the nature of waves?

A longitudinal wave is a disturbance that moves like air or water through a medium. Fluids such as these may be assumed to consist of a huge number of particles” composed of a massive number of molecules each.

Is electromagnetic radiation harmful to humans?

What are electromagnetic waves and their properties?

EM waves ride in a vacuum at a fixed frequency of 3.00 x 108 ms-1. Neither the electric field nor the gravitational field deflects them. They are capable of exhibiting interference or diffraction, though. An electric pulse – be it air, a rigid object or a vacuum – can pass through something.

Is electromagnetic energy a light?

To learn more about the wave nature of electromagnetic radiation, download BYJU’S, the learning app.