In board exams few questions from previous years are expected to be asked in the exam every year. So, it’s crucial that while preparing for the exam, students must solve previous years’ question papers. Hence, to help students in their exam preparation we have provided the ICSE Class 10 Chemistry Question Paper 2019 along with the Solutions. Going through this paper solution pdf will give students a new way of approaching the questions during the exam.

Students can have a look at the ICSE Class 10 Chemistry Question Paper Solution 2019 below: 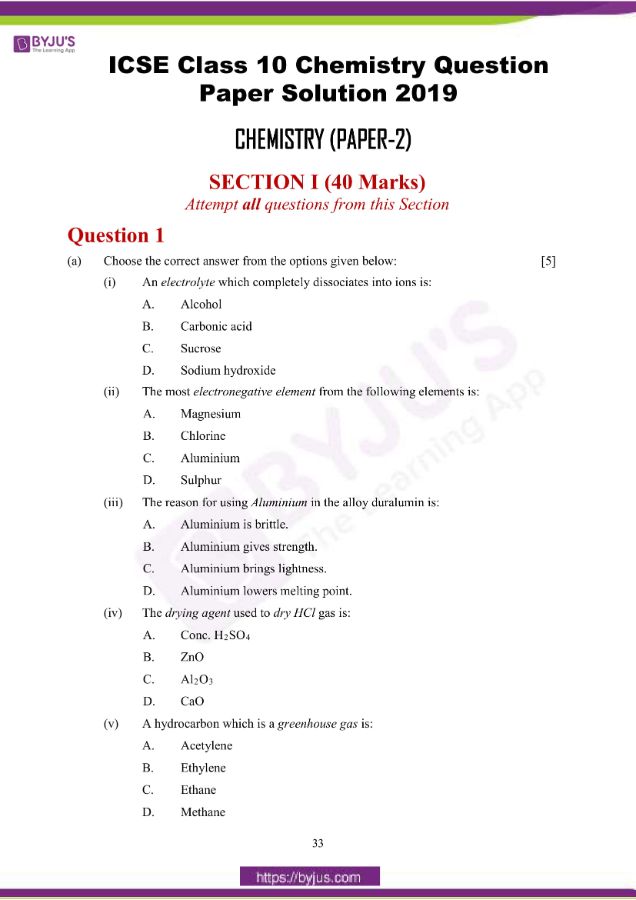 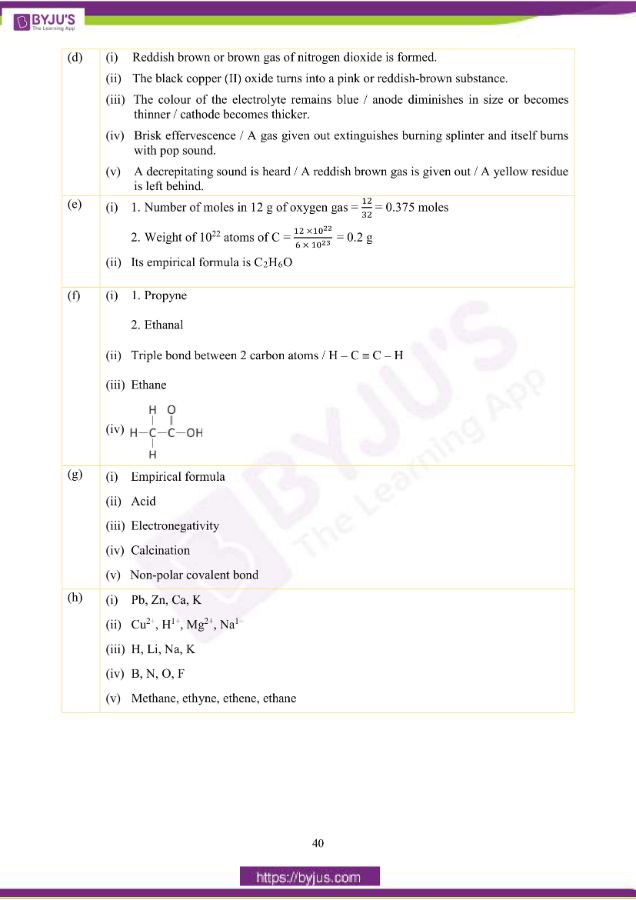 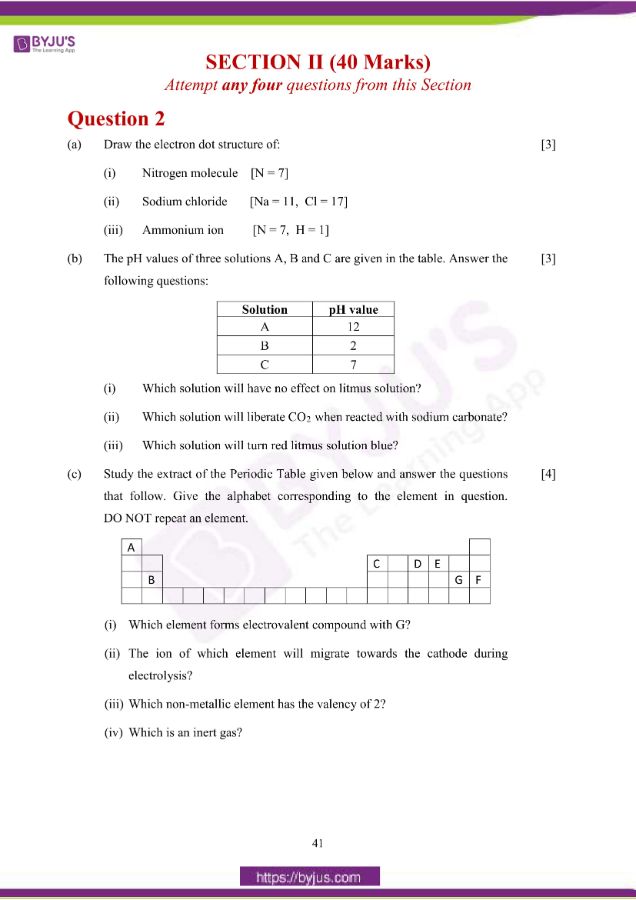 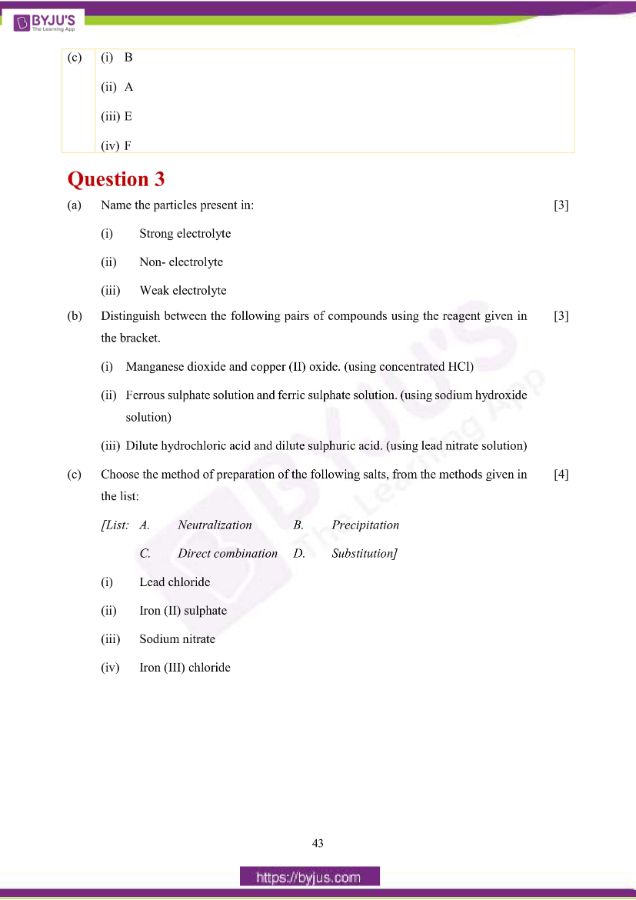 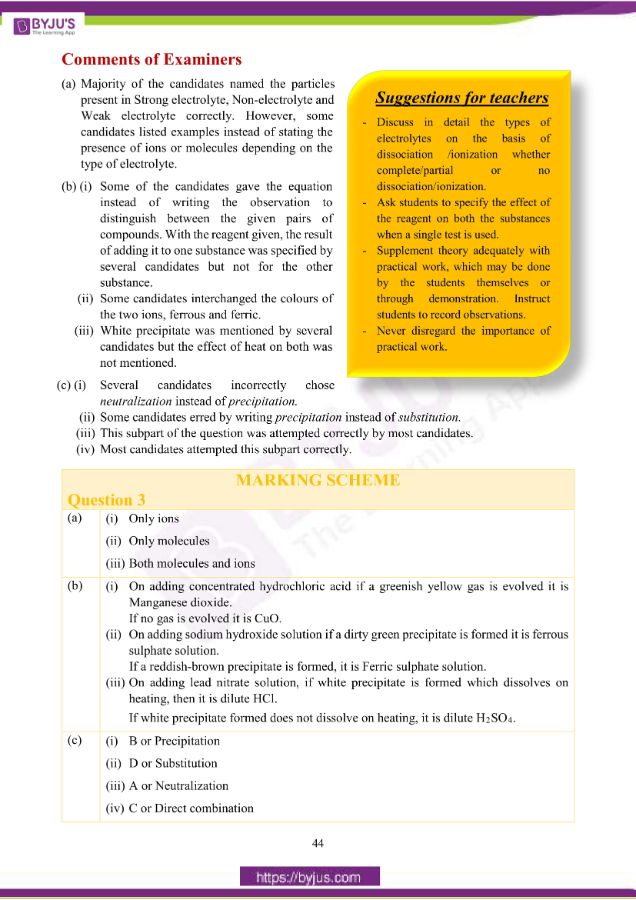 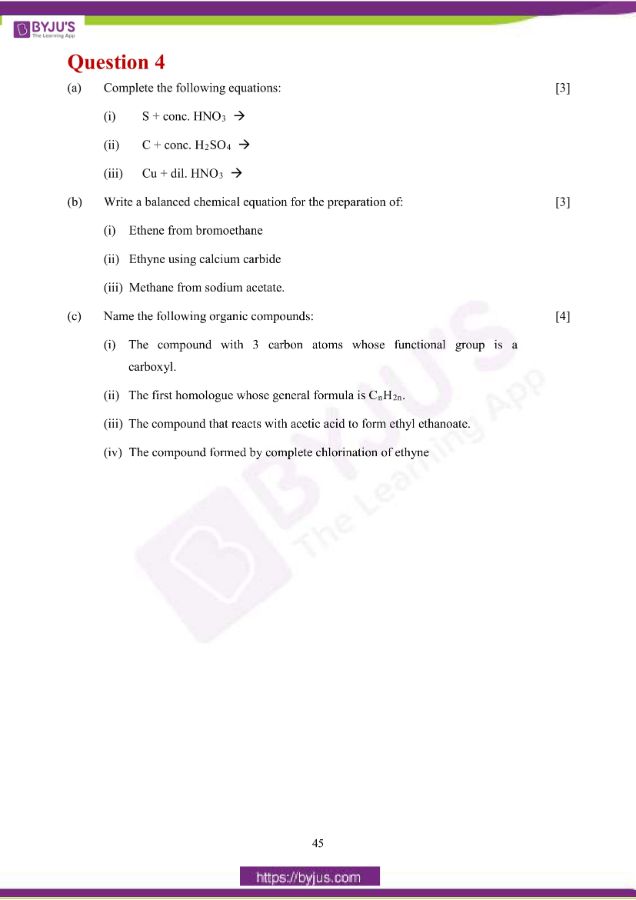 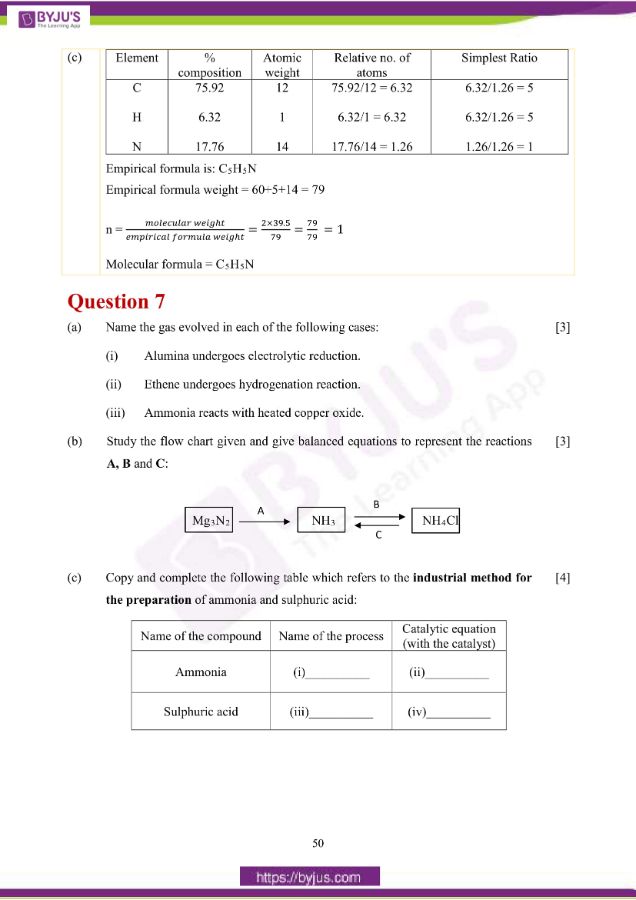 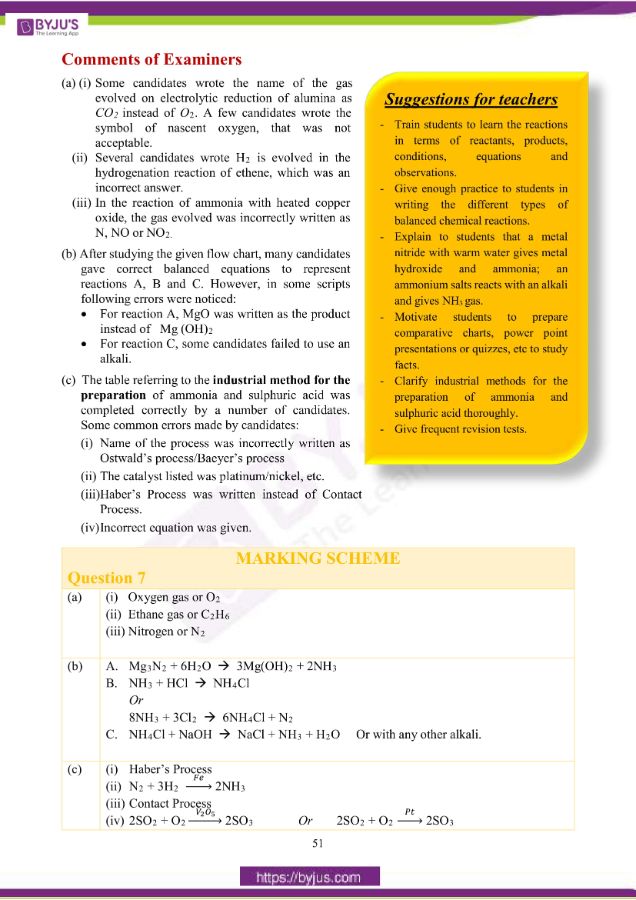 (a) Choose the correct answer from the options given below:

(i) An electrolyte which completely dissociates into ions is:

(ii) The most electronegative element from the following elements is:

(iii) The reason for using Aluminium in the alloy duralumin is:

A. Aluminium is brittle.

(iv) The drying agent used to dry HCl gas is:

(v) A hydrocarbon which is a greenhouse gas is:

(b) Fill in the blanks with the choices given in brackets:

(i) Conversion of ethanol to ethene by the action of concentrated sulphuric acid is an example of ____________. (dehydration / dehydrogenation / dehydrohalogenation)

(ii) When sodium chloride is heated with concentrated sulphuric acid below 200oC, one of the products formed is ____________. (sodium hydrogen sulphate / sodium sulphate / chlorine)

(c) Write a balanced chemical equation for each of the following reactions:

(i) Reduction of copper (II) oxide by hydrogen.

(d) State one observation for each of the following:

(i) Concentrated nitric acid is reacted with sulphur.

(iv) A small piece of zinc is added to dilute hydrochloric acid.

(v) Lead nitrate is heated strongly in a test tube.

(ii) Molecular formula of a compound is C6H18O3. Find its empirical

(f) (i) Give the IUPAC name of the following organic compounds: (ii) What is the special feature of the structure of ethyne?

(iv) Give the structural formula of Acetic acid.

(g) Give the appropriate term defined by the statements given below:

(i) The formula that represents the simplest ratio of the various elements present in one molecule of the compound.

(ii) The substance that releases hydronium ion as the only positive ion when dissolved in water.

(iii) The tendency of an atom to attract electrons towards itself when combined in a covalent compound.

(iv) The process by which certain ores, specially carbonates, are converted to oxides in the absence of air.

(h) Arrange the following according to the instructions given in brackets:

(iii) Li, K, Na, H (In the decreasing order of their ionization potential)

(iv) F, B, N, O (In the increasing order of electron affinity)

(v) Ethane, methane, ethene, ethyne. (In the increasing order of the molecular

(a) (i) D or Sodium Hydroxide or NaOH

(iv) A or Concentrated H2SO4 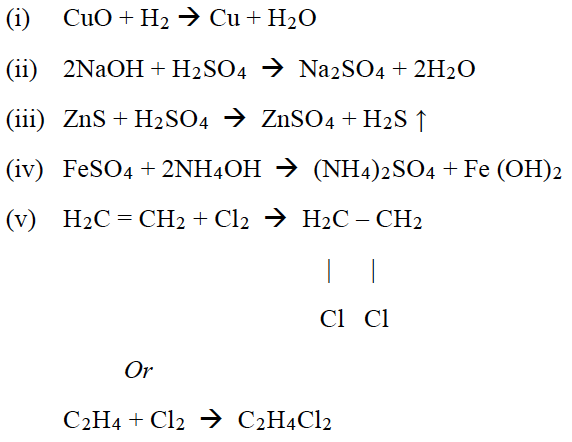 (d) (i) Reddish brown or brown gas of nitrogen dioxide is formed.

(ii) The black copper (II) oxide turns into a pink or reddish-brown substance.

(ii) Its empirical formula is C2H6O

(a) Draw the electron dot structure of:

(b) The pH values of three solutions A, B and C are given in the table. Answer the following questions:

(i) Which solution will have no effect on litmus solution?

(ii) Which solution will liberate CO2 when reacted with sodium carbonate?

(c) Study the extract of the Periodic Table given below and answer the questions that follow. Give the alphabet corresponding to the element in question. DO NOT repeat an element.

(i) Which element forms electrovalent compound with G?

(ii) The ion of which element will migrate towards the cathode during electrolysis?

(iii) Which non-metallic element has the valency of 2?

(iv) Which is an inert gas? 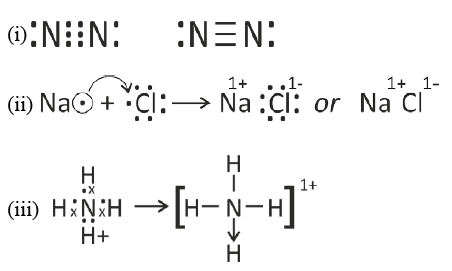 (a) Name the particles present in:

(c) Choose the method of preparation of the following salts, from the methods given in

(iii) Both molecules and ions

(b) (i) On adding concentrated hydrochloric acid if a greenish yellow gas is evolved it is Manganese dioxide.

If no gas is evolved it is CuO.

If a reddish-brown precipitate is formed, it is Ferric sulphate solution.

(iii) On adding lead nitrate solution, if white precipitate is formed which dissolves on heating, then it is dilute HCl.

If white precipitate formed does not dissolve on heating, it is dilute H2SO4.

(iii) A or Neutralization

(a) Complete the following equations:

(b) Write a balanced chemical equation for the preparation of:

(i) The compound with 3 carbon atoms whose functional group is a carboxyl.

(ii) The first homologue whose general formula is CnH2n.

(iii) The compound that reacts with acetic acid to form ethyl ethanoate.

(iv) The compound formed by complete chlorination of ethyne

(a) Give the chemical formula of:

(i) What is the function of cryolite used along with alumina as the electrolyte?

(ii) Why is powdered coke sprinkled on top of the electrolyte?

(iii) Name the electrode, from which aluminium is collected.

released at the anode / Powdered coke prevents the loss of heat from the electrolyte.

(ii) Solder: A or Electrical fuse

(a) Identify the substances underlined:

(i) The catalyst used to oxidise ammonia.

(ii) The organic compound which when solidified, forms an ice like mass.

(iii) The dilute acid which is an oxidizing agent.

precipitate of copper hydroxide according to the equation:

(ii) What is the colour of the precipitate formed?

compound from the data given below:

The vapour density of the compound is 39.5.

(a) Name the gas evolved in each of the following cases:

(c) Copy and complete the following table which refers to the industrial method for the preparation of ammonia and sulphuric acid: