By going through the 2016 paper, students can analyse the way questions were asked in the exam. This will help in understanding the exam trend from 2016 to the present. Knowing it, students can prepare efficiently for the exam and determine the type of questions expected to be asked in the exam. The ICSE Class 10 Geography 2016 exam was of 80 marks and students were allotted 2 hours of time duration to finish the paper. For downloading the ICSE Class 10 Geography Question Paper Solution 2016 PDF click on the link below.

Students can have a look at the ICSE Class 10 Geography Question Paper Solution 2016 below: 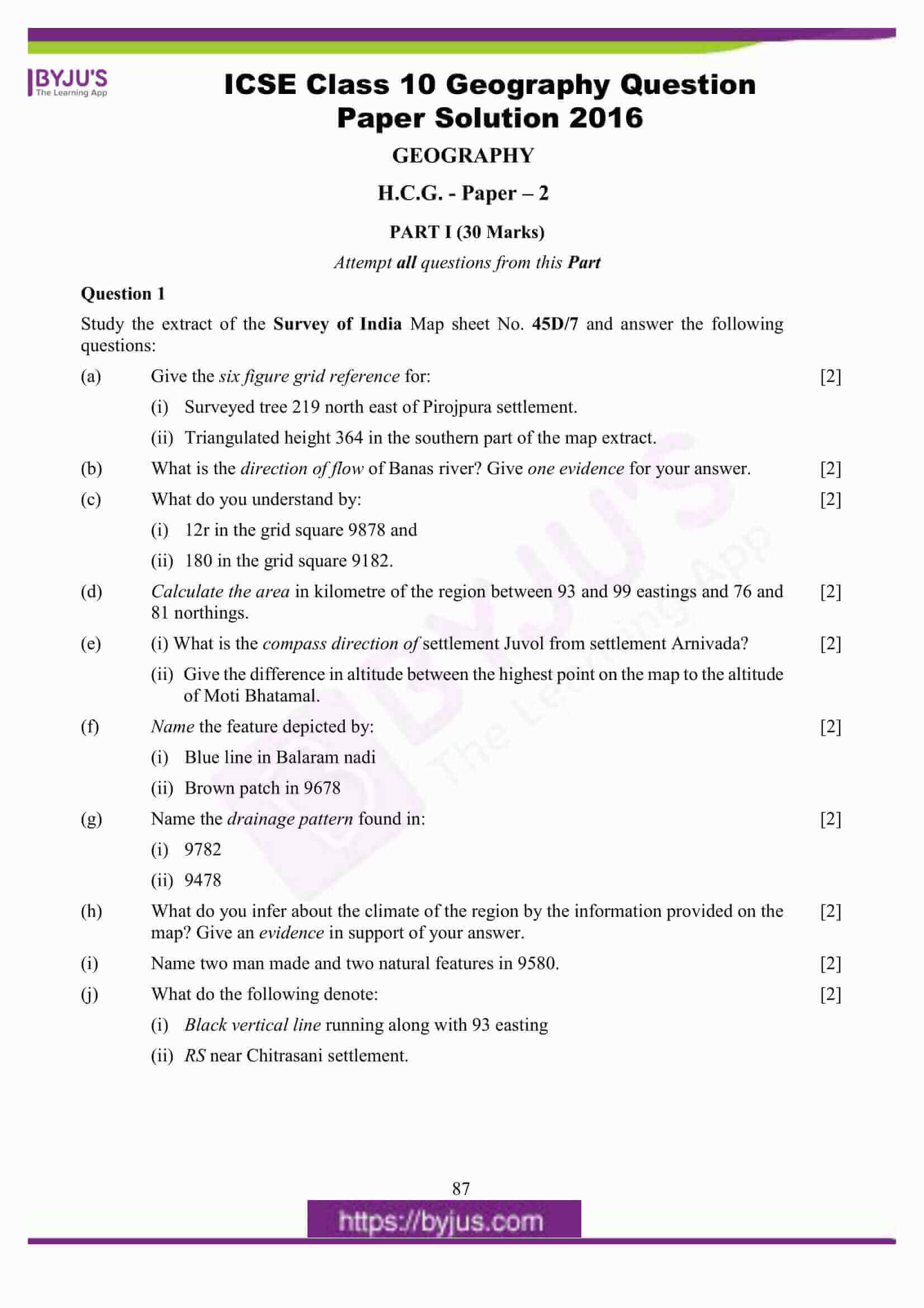 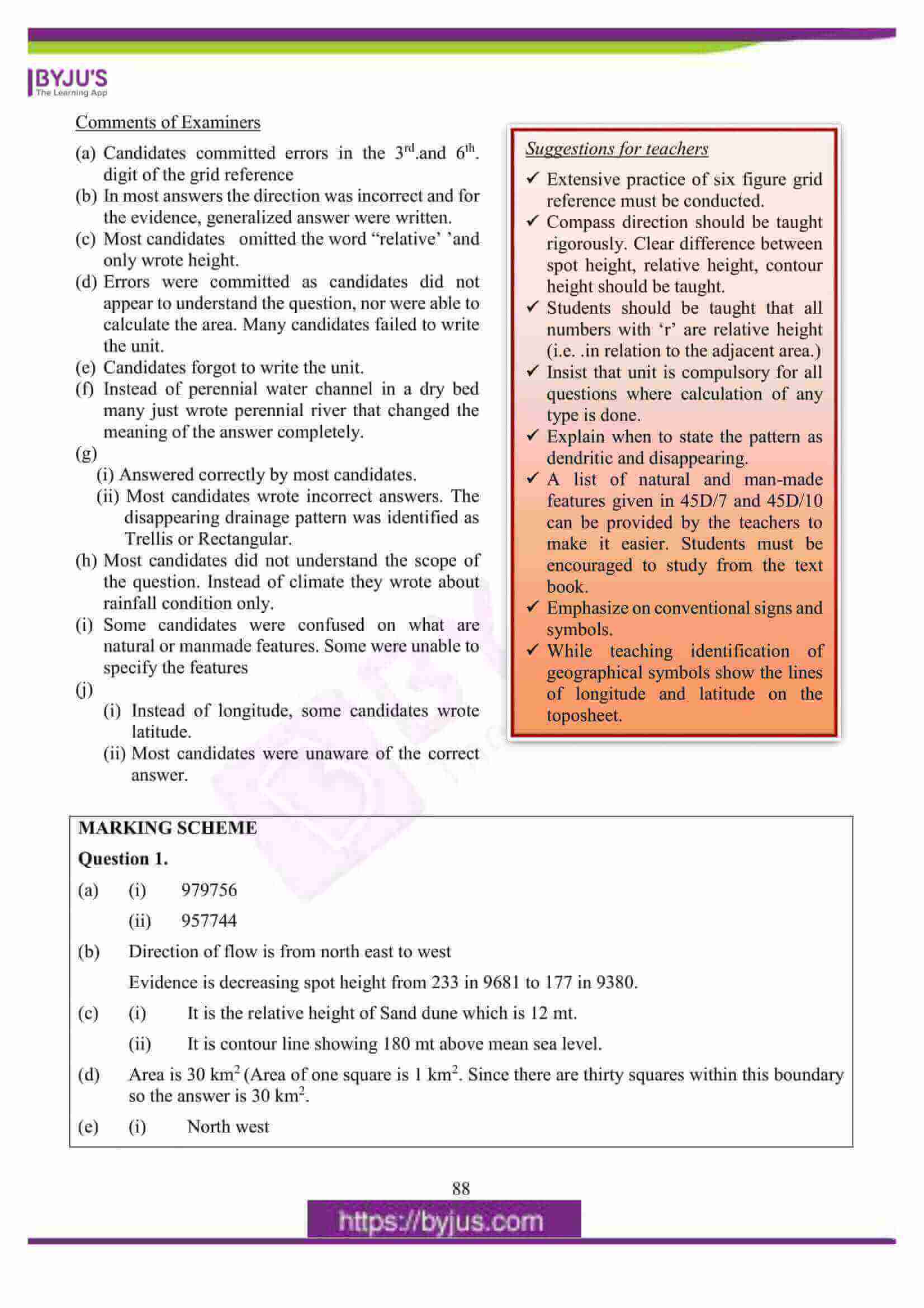 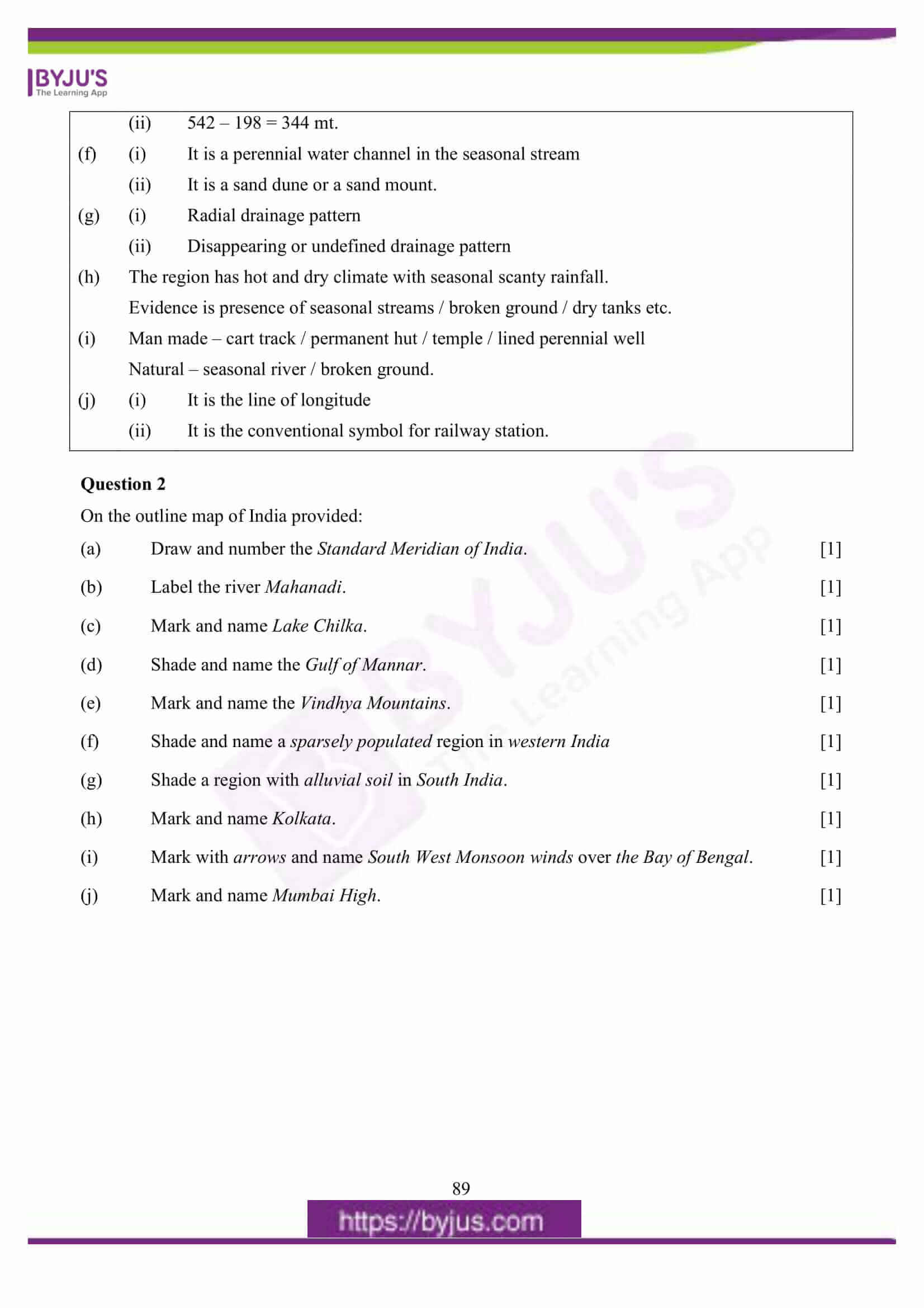 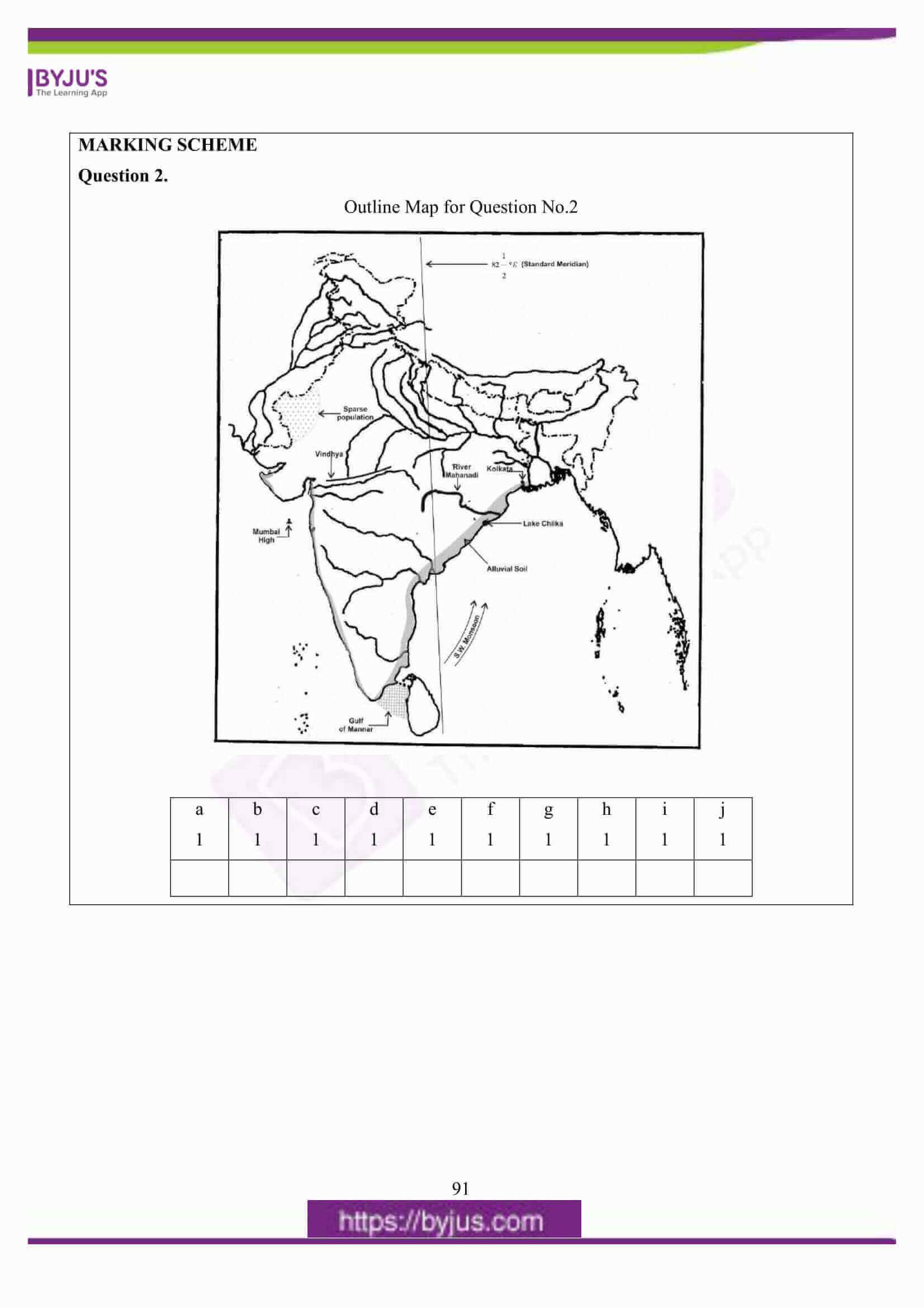 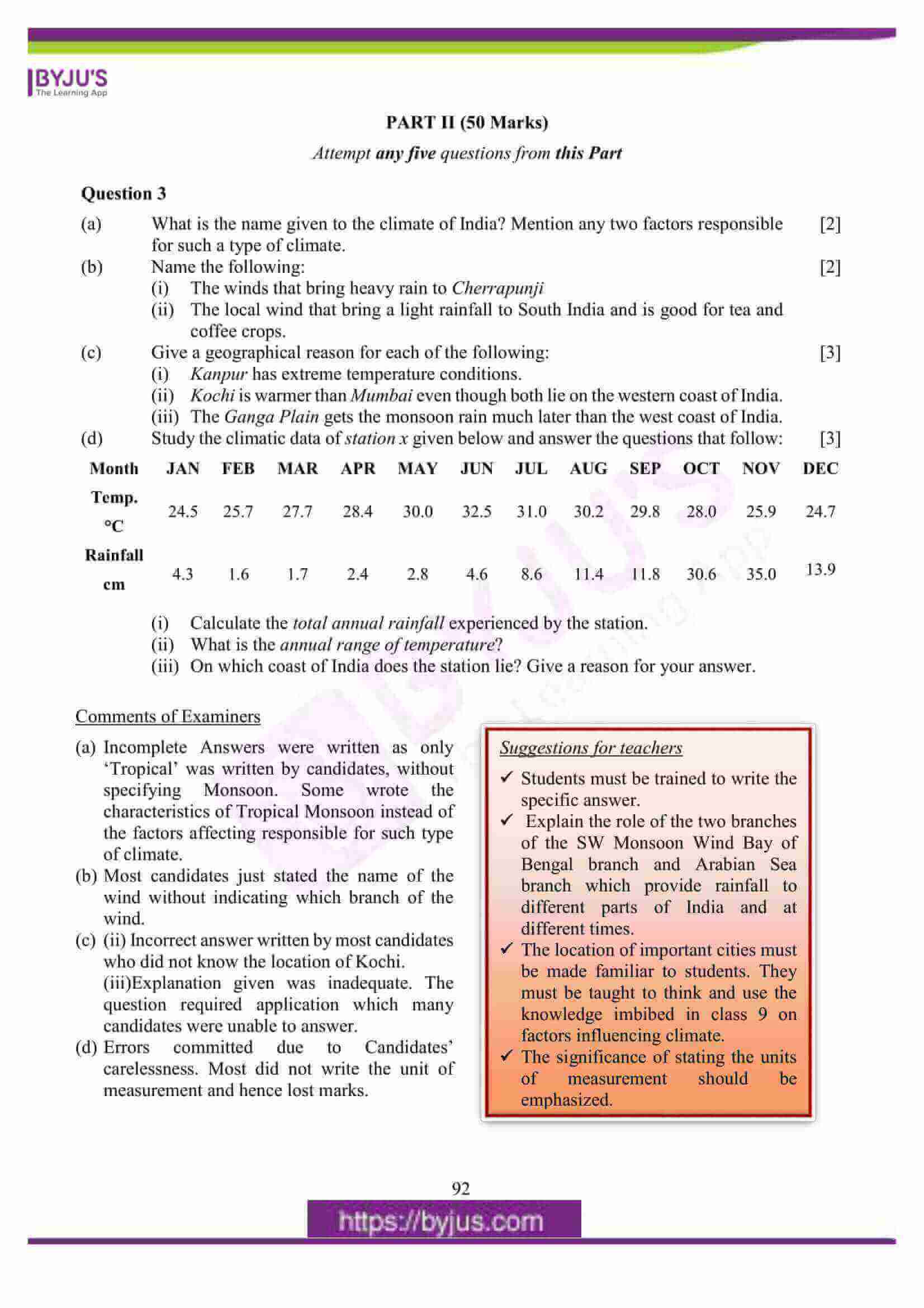 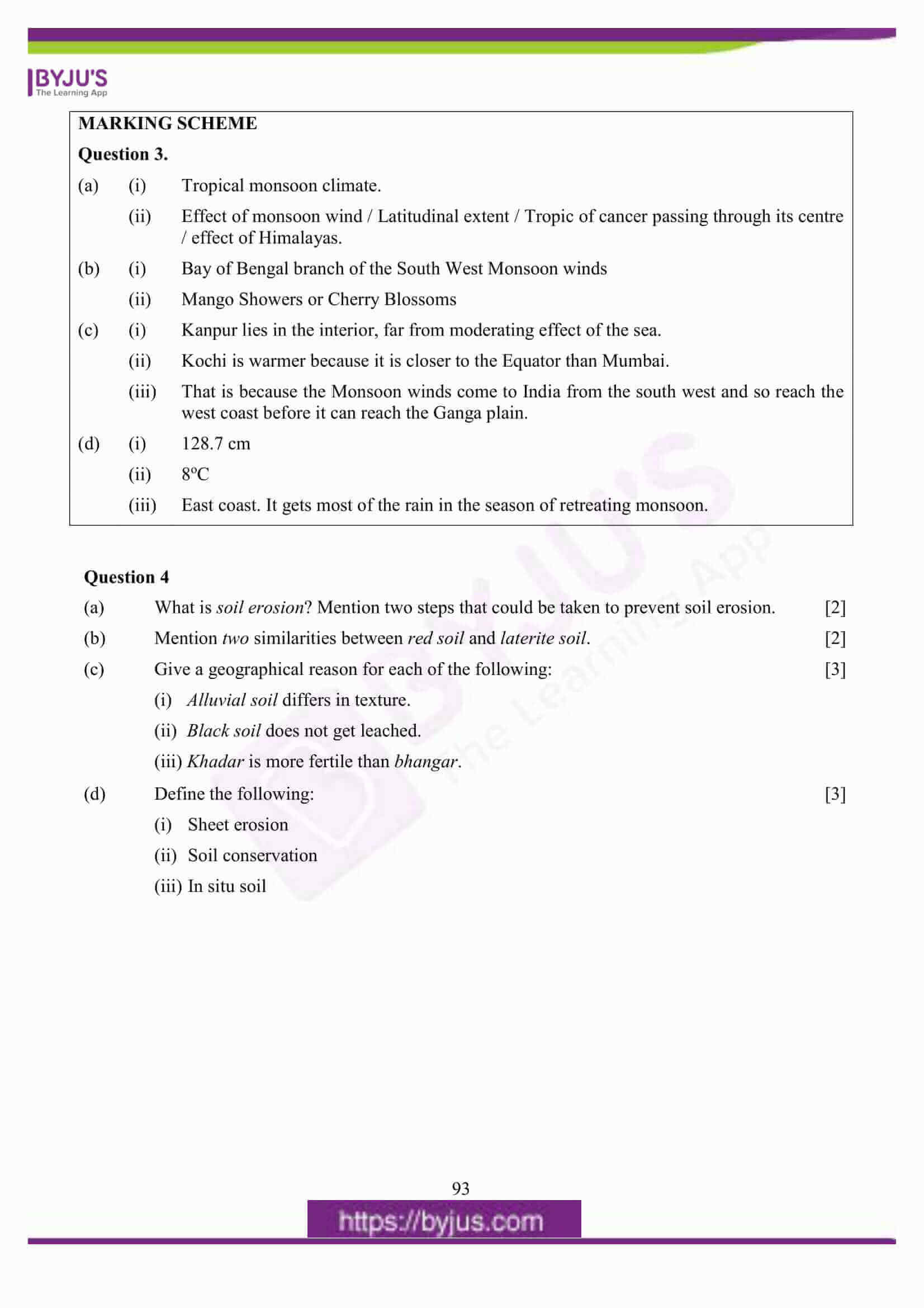 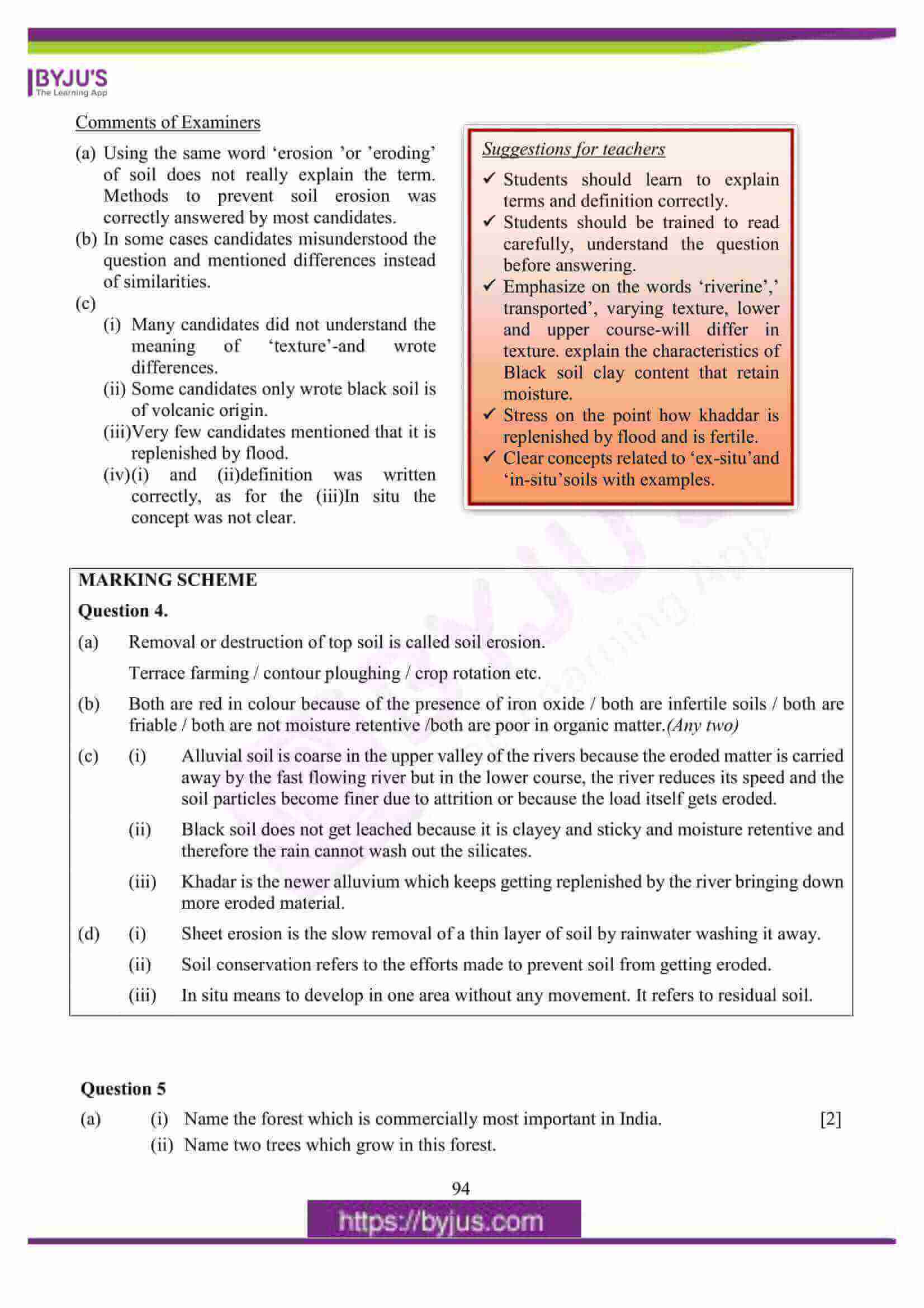 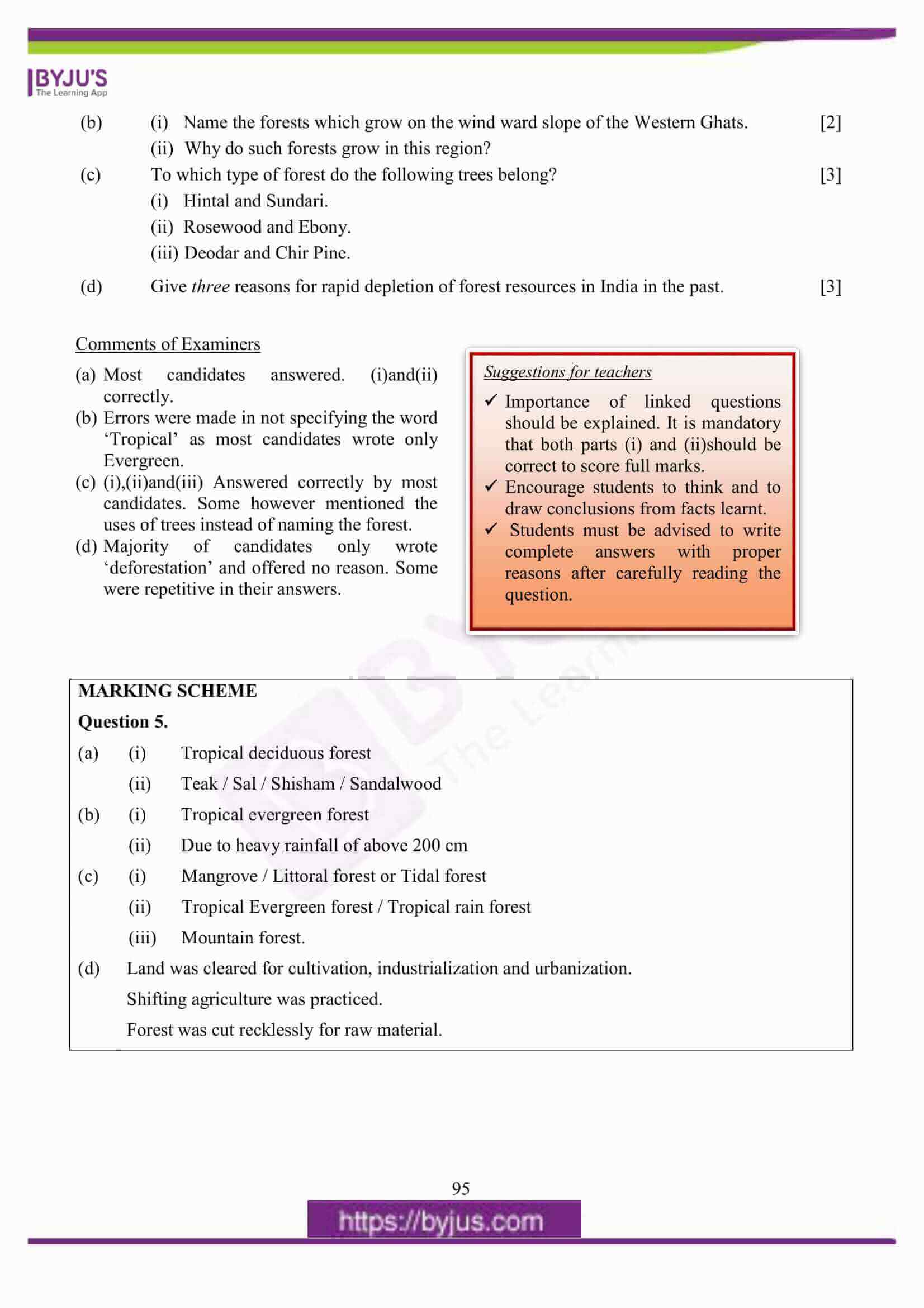 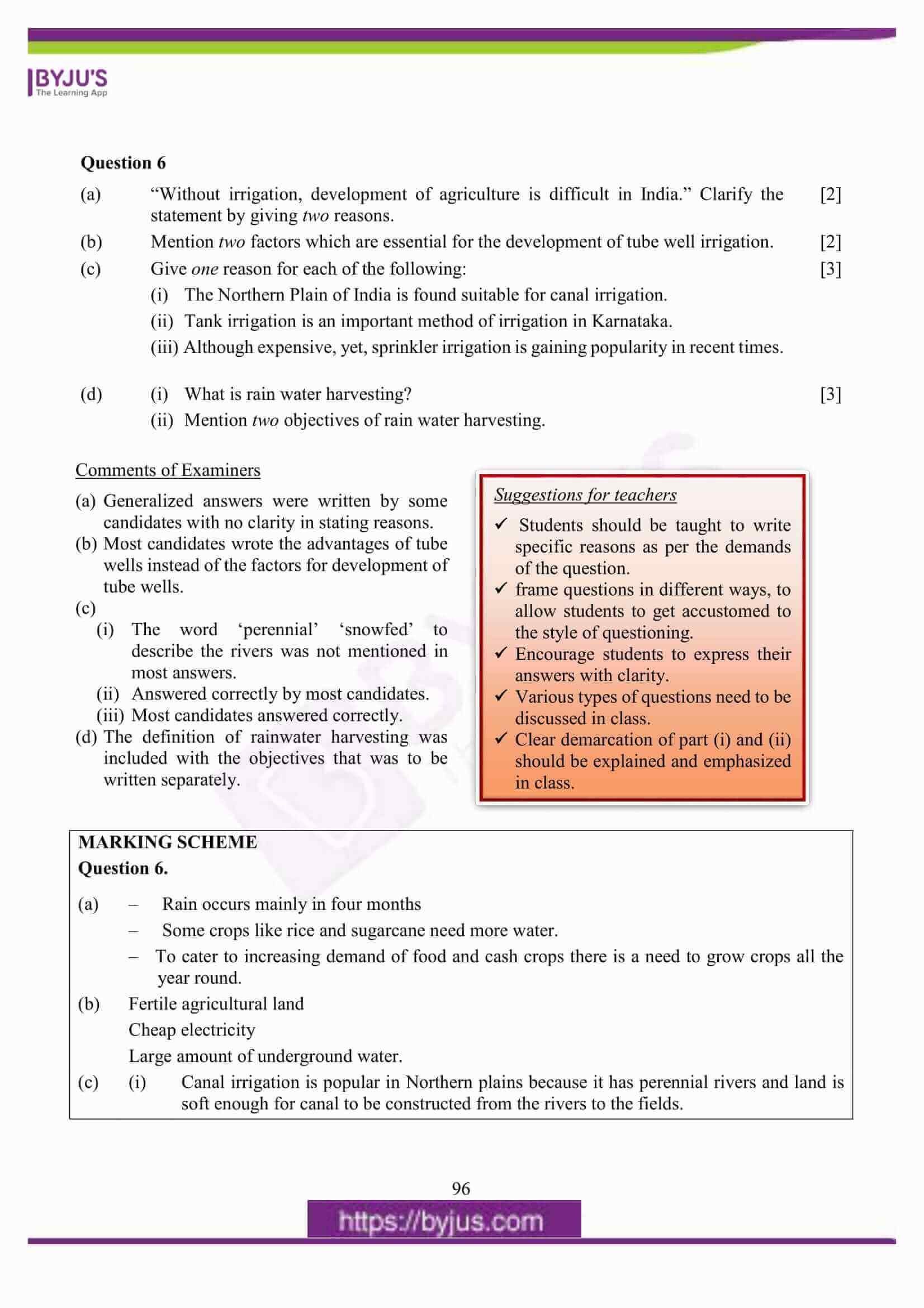 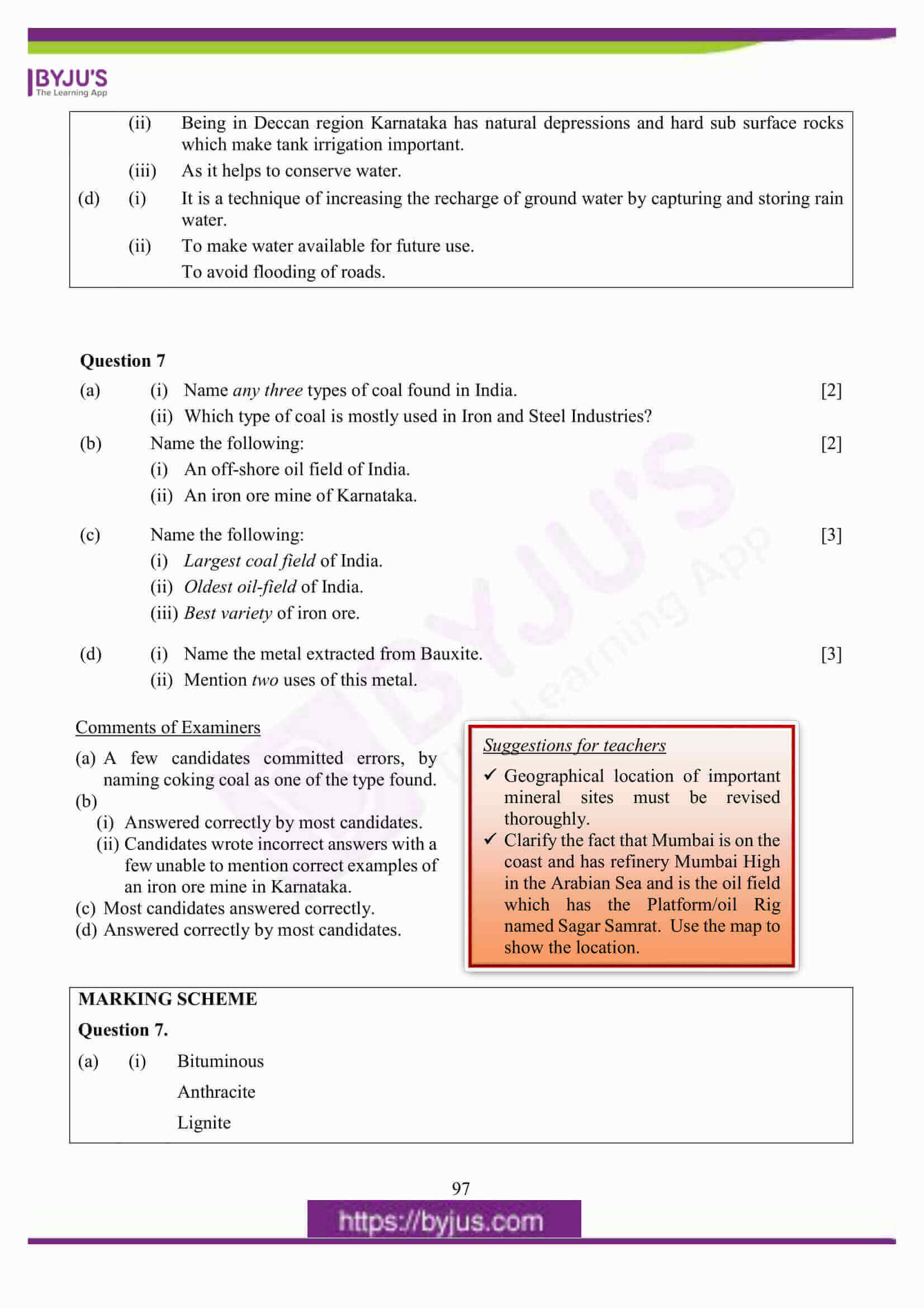 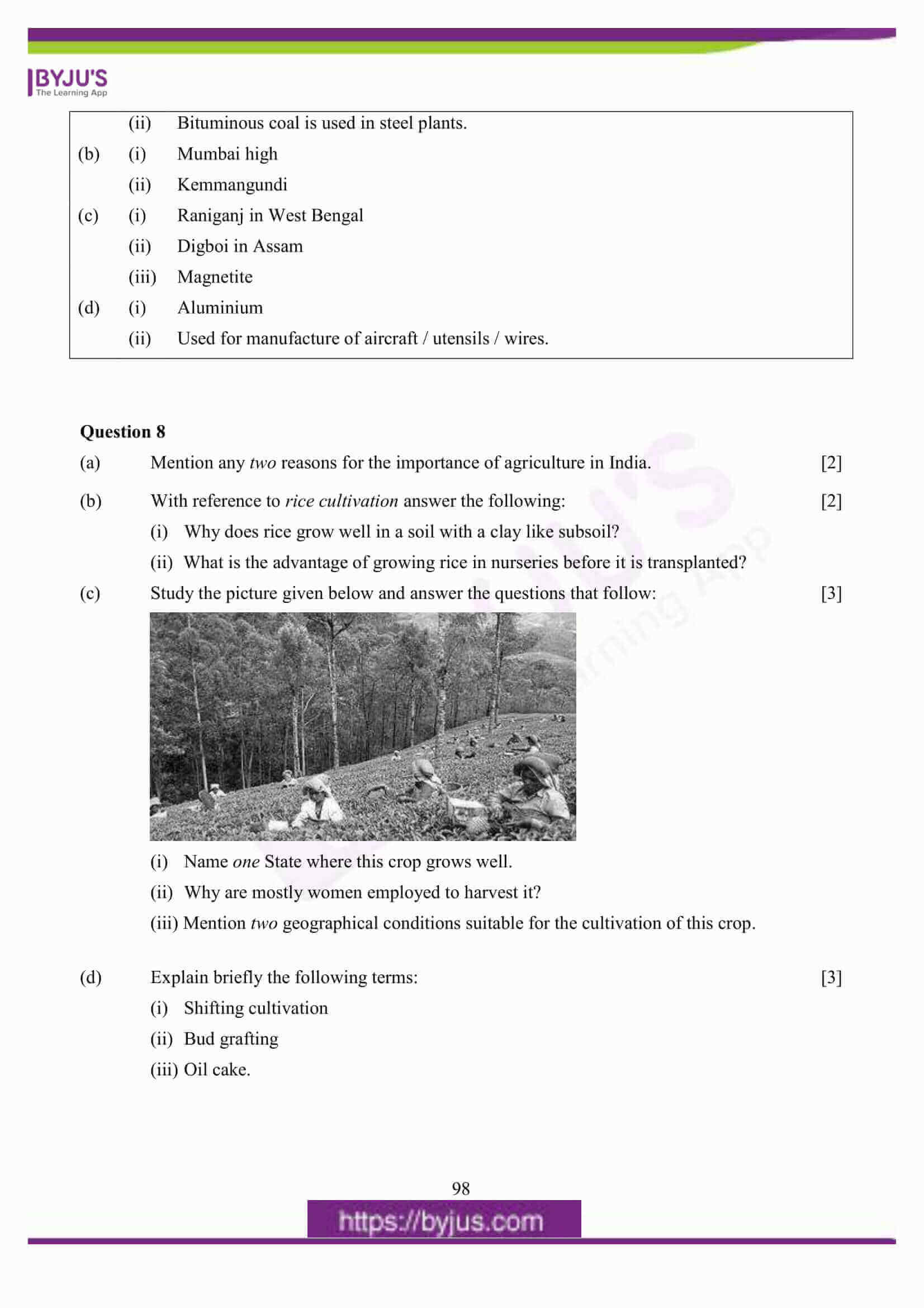 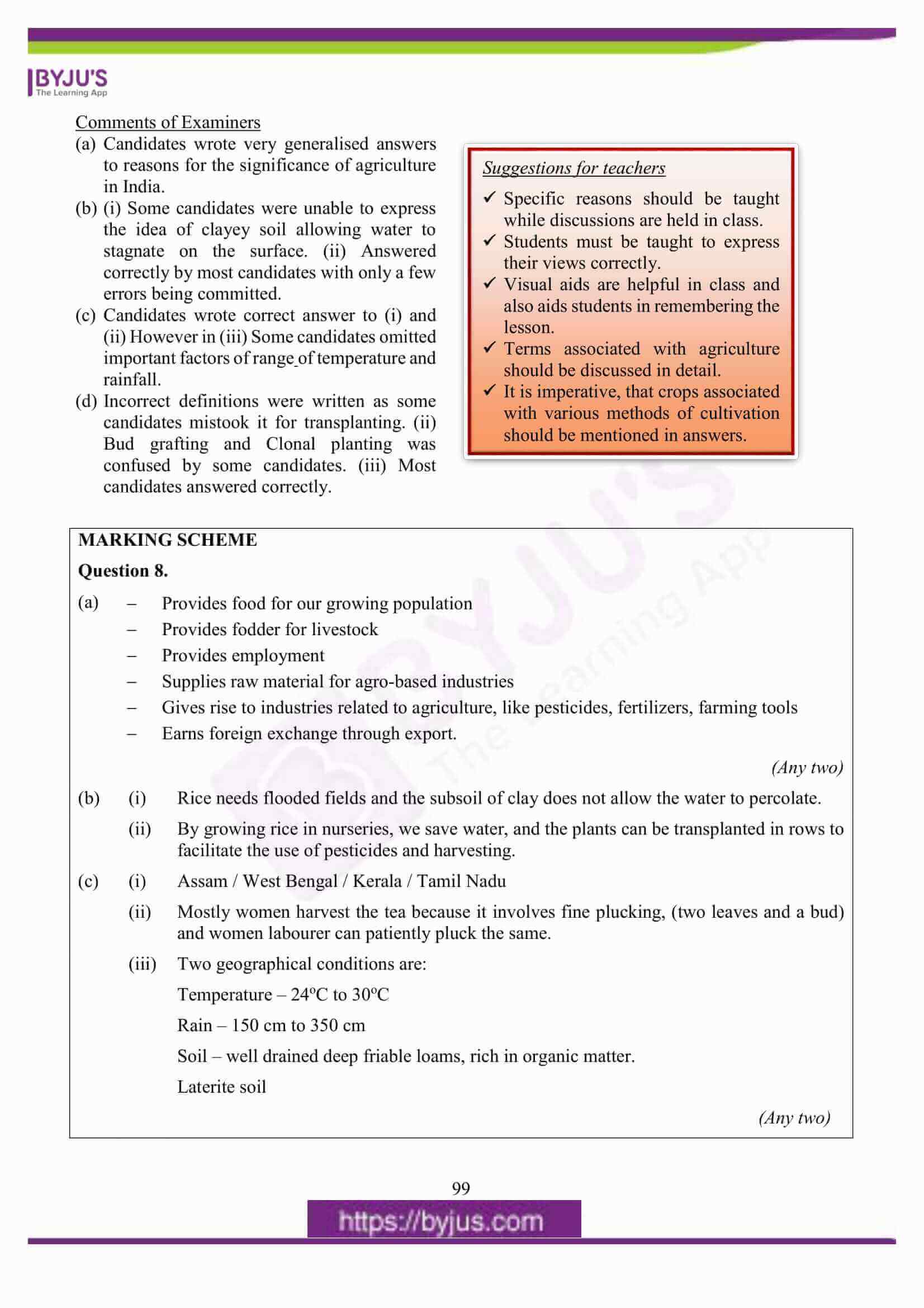 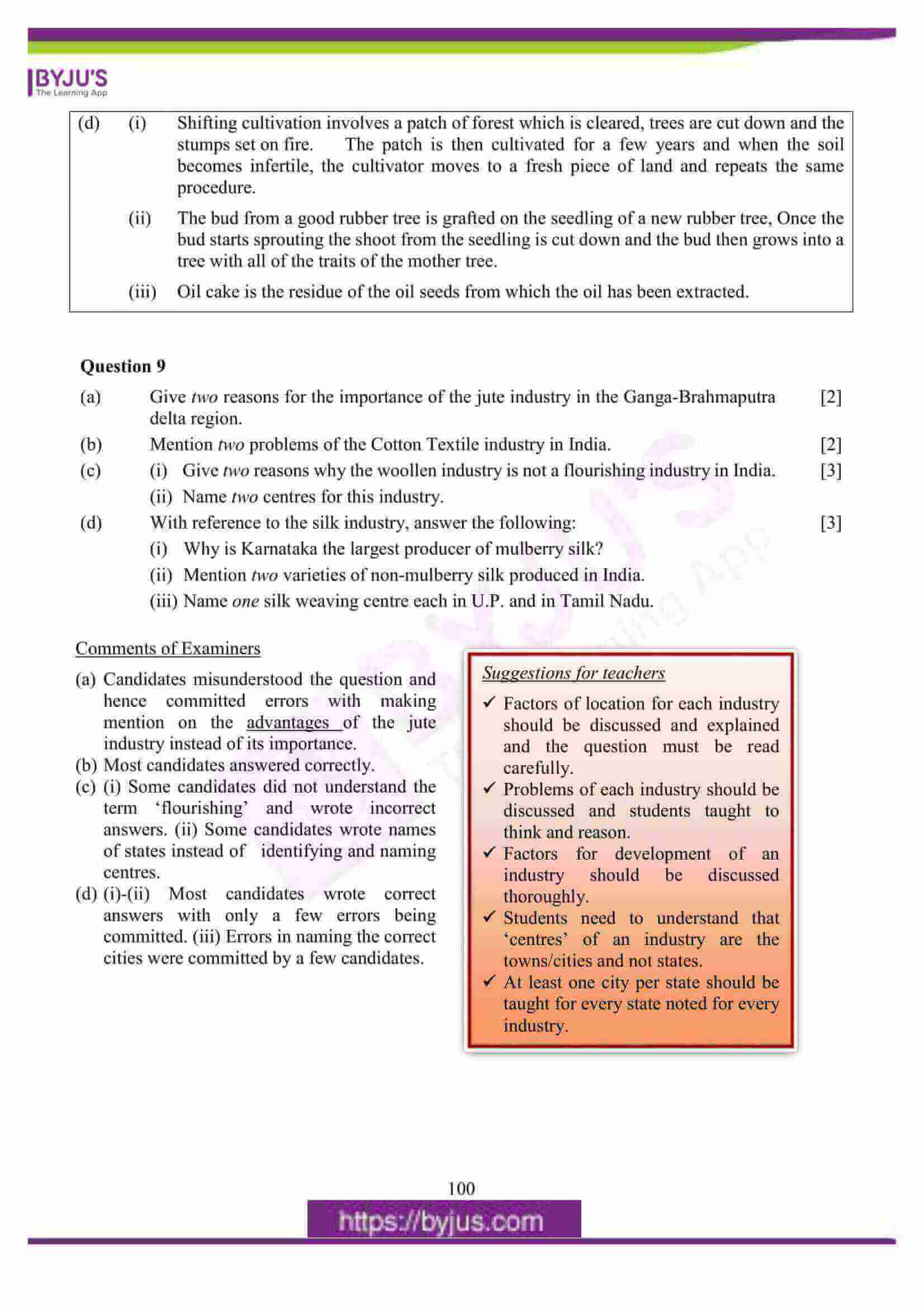 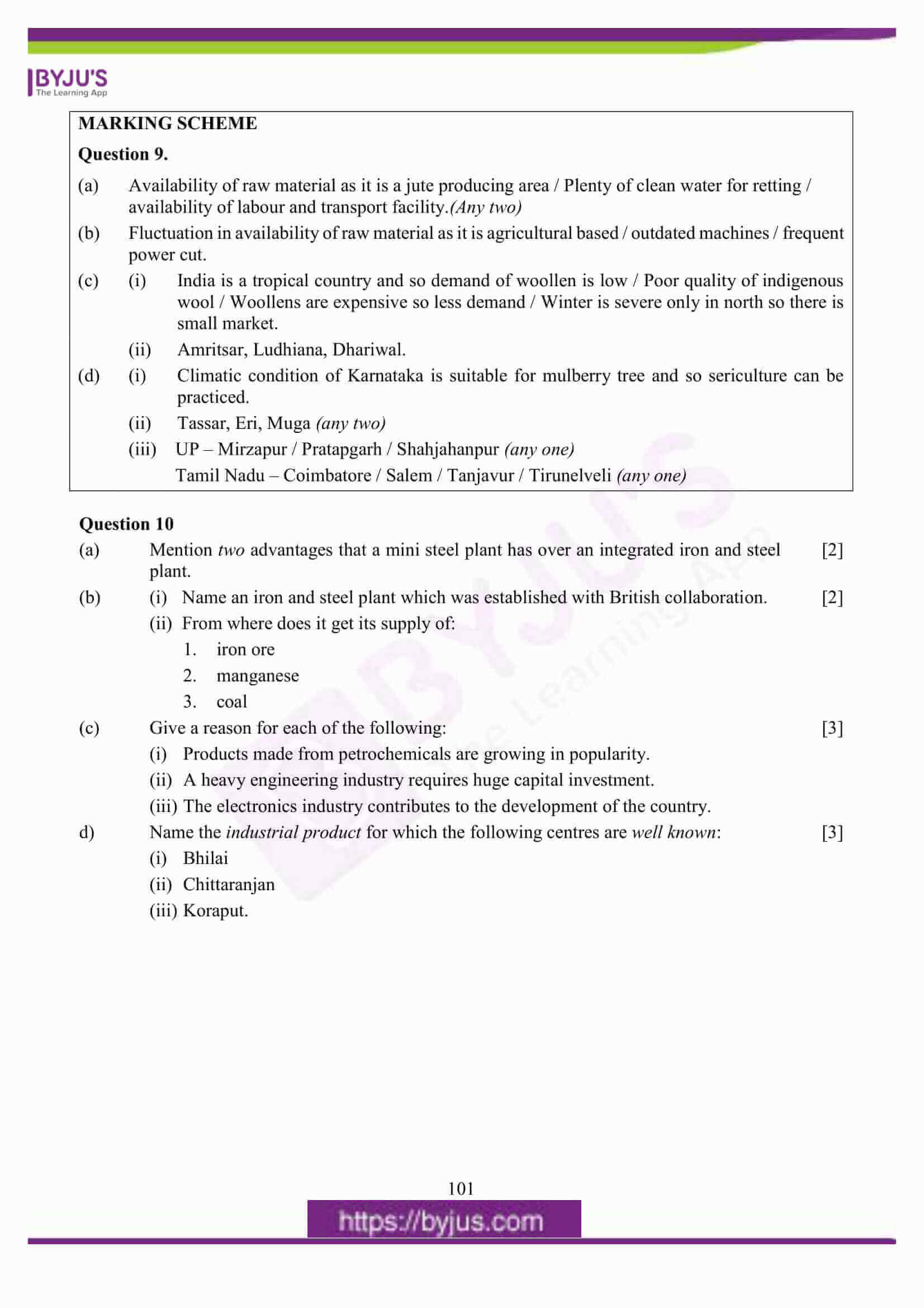 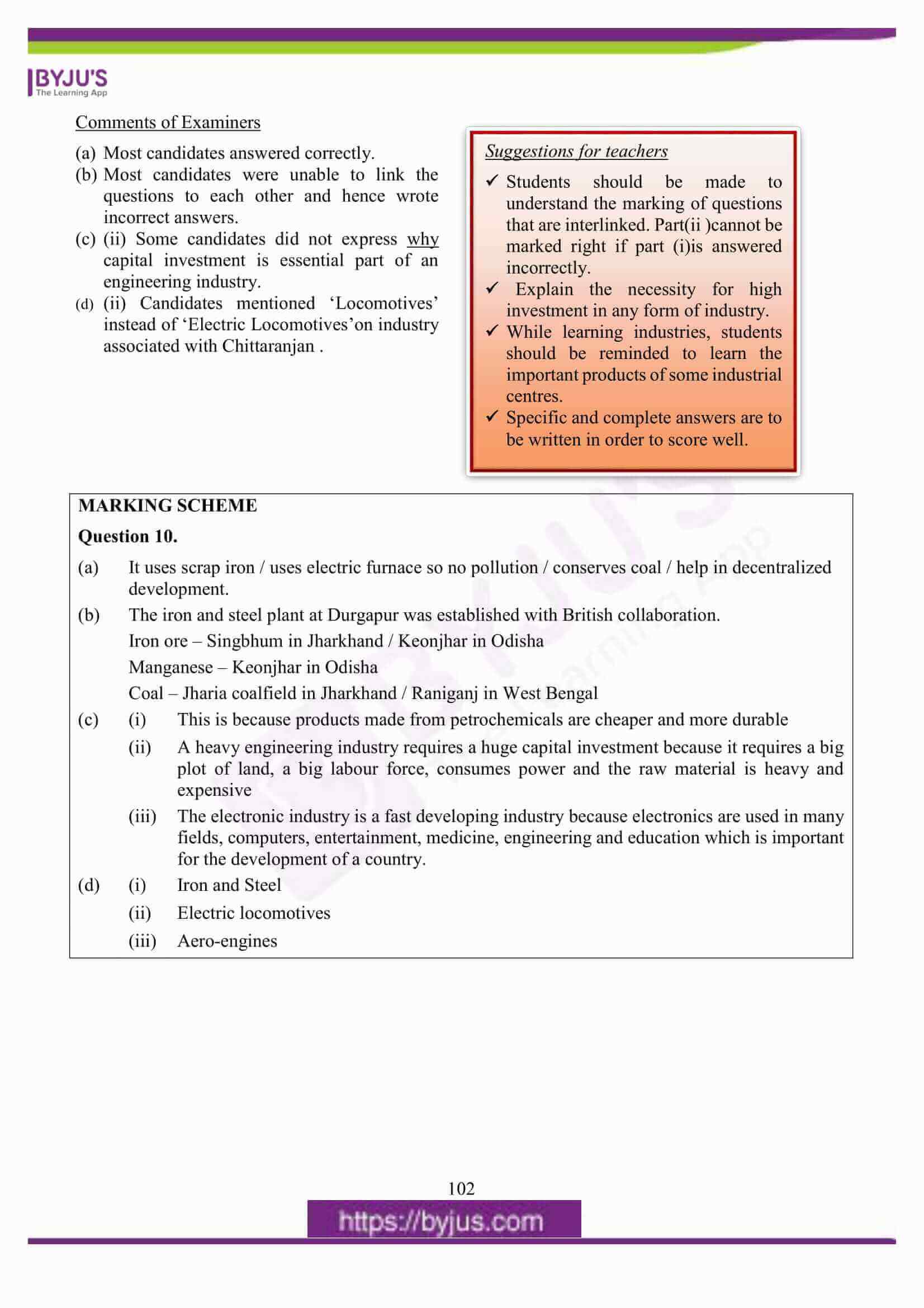 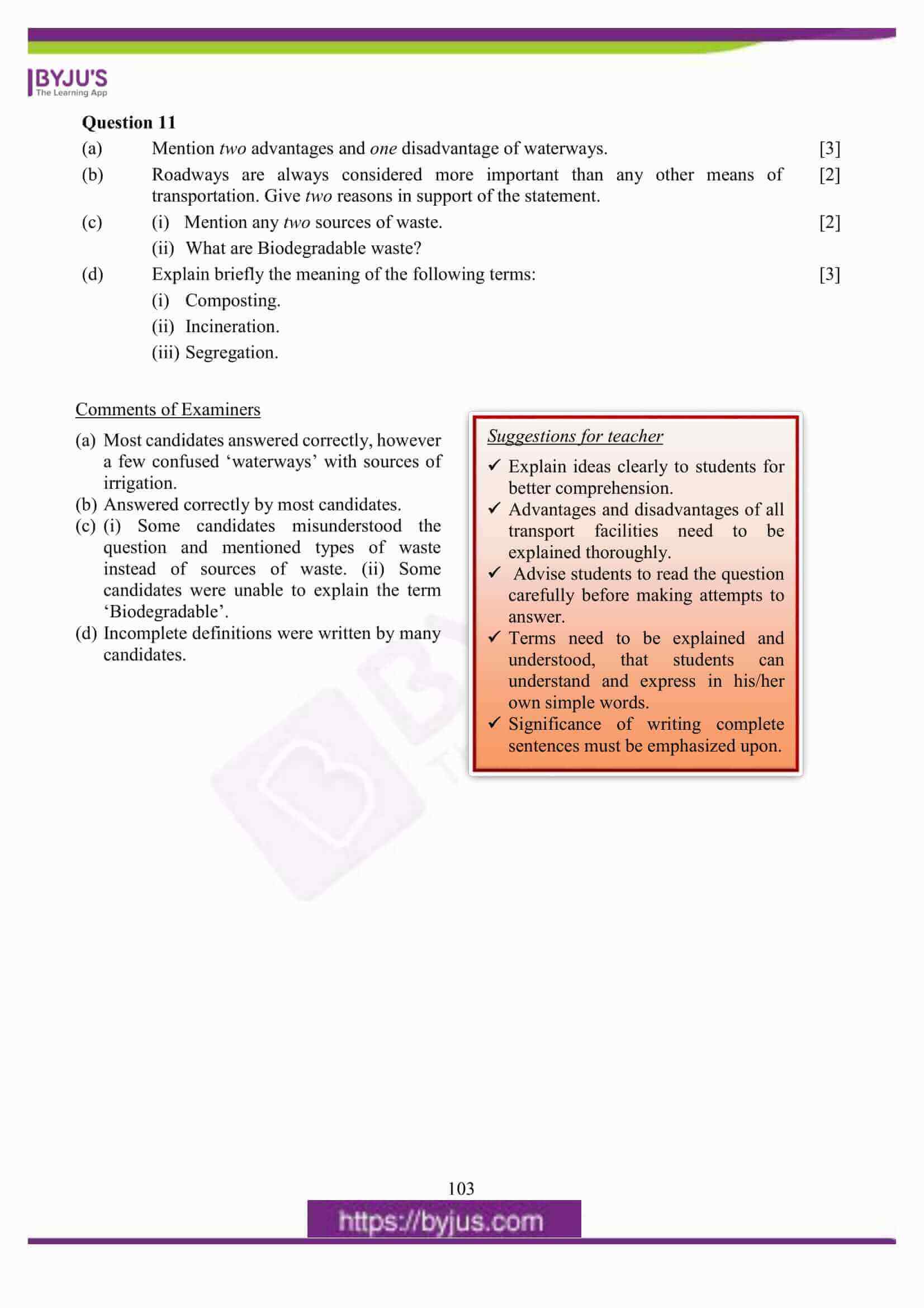 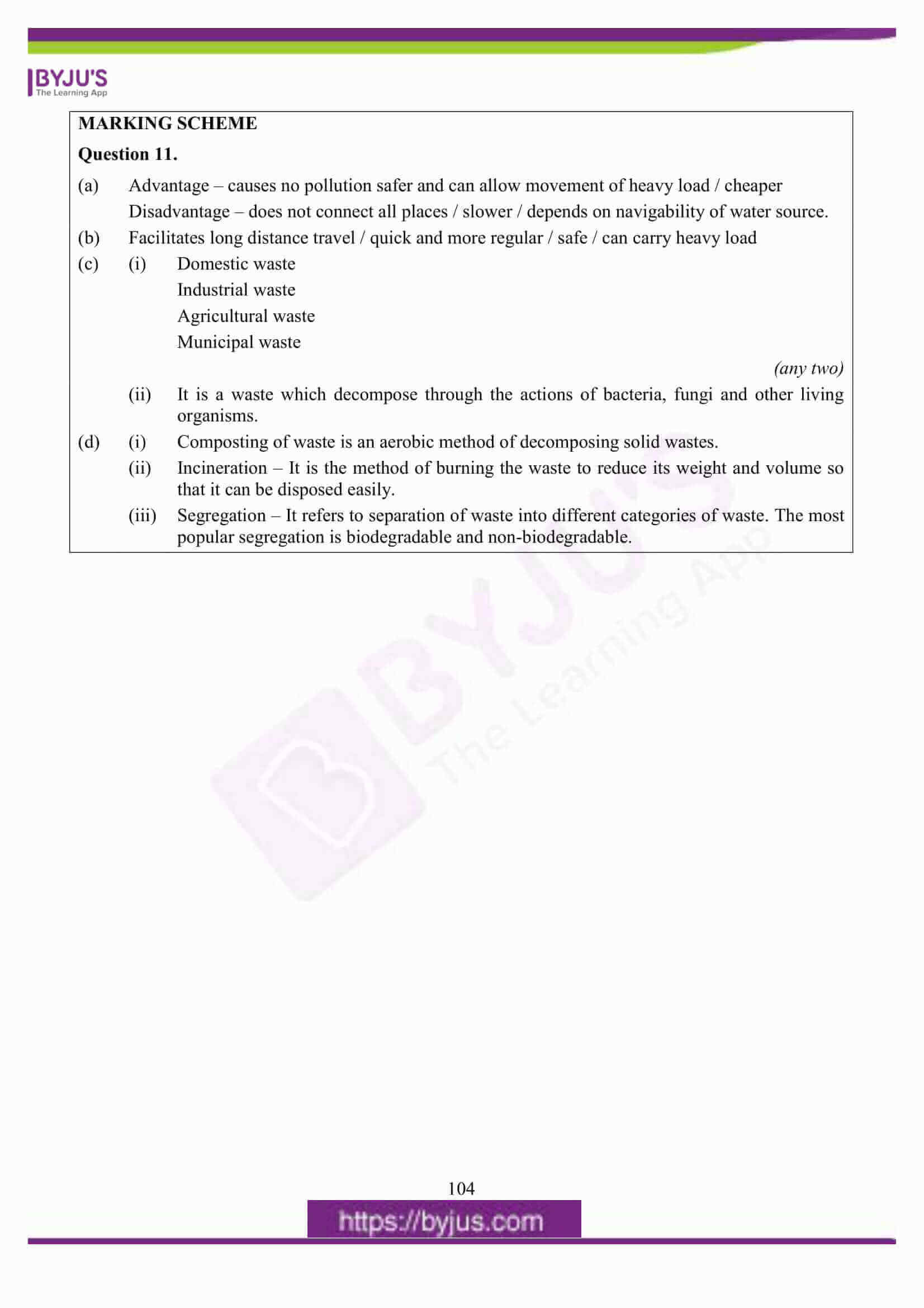 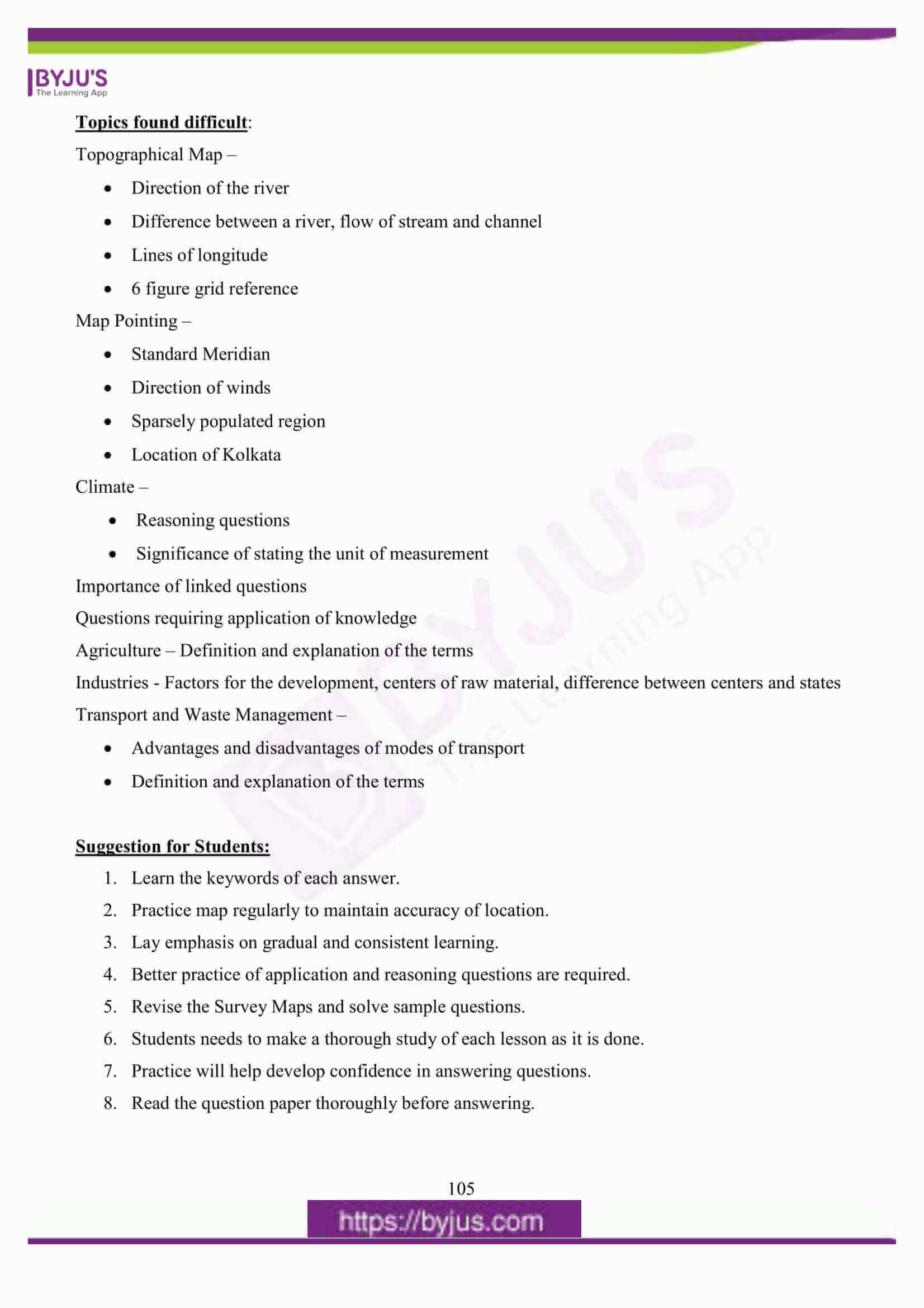 Question 1: Study the extract of the Survey of India Map sheet No. 45D/7 and answer the following questions:

(a) Give the six figure grid reference for:

(ii) Triangulated height 364 in the southern part of the map extract.

(b) What is the direction of flow of Banas river? Give one evidence for your answer.

(c) What do you understand by:

(d) Calculate the area in kilometre of the region between 93 and 99 eastings and 76 and 81 northings.

(e) (i) What is the compass direction of settlement Juvol from settlement Arnivada?

(f) Name the feature depicted by:

(i) Blue line in Balaram nadi

(h) What do you infer about the climate of the region by the information provided on the map? Give an evidence in support of your answer.

(j) What do the following denote:

(i) Black vertical line running along with 93 easting

(b) Direction of flow is from north east to west

(h) The region has hot and dry climate with seasonal scanty rainfall.

(ii) It is the conventional symbol for railway station.

Question 2: On the outline map of India provided:

(a) Draw and number the Standard Meridian of India.

(b) Label the river Mahanadi.

(d) Shade and name the Gulf of Mannar.

(g) Shade a region with alluvial soil in South India.

(i) Mark with arrows and name South West Monsoon winds over the Bay of Bengal.

Answer: Outline Map for Question No.2 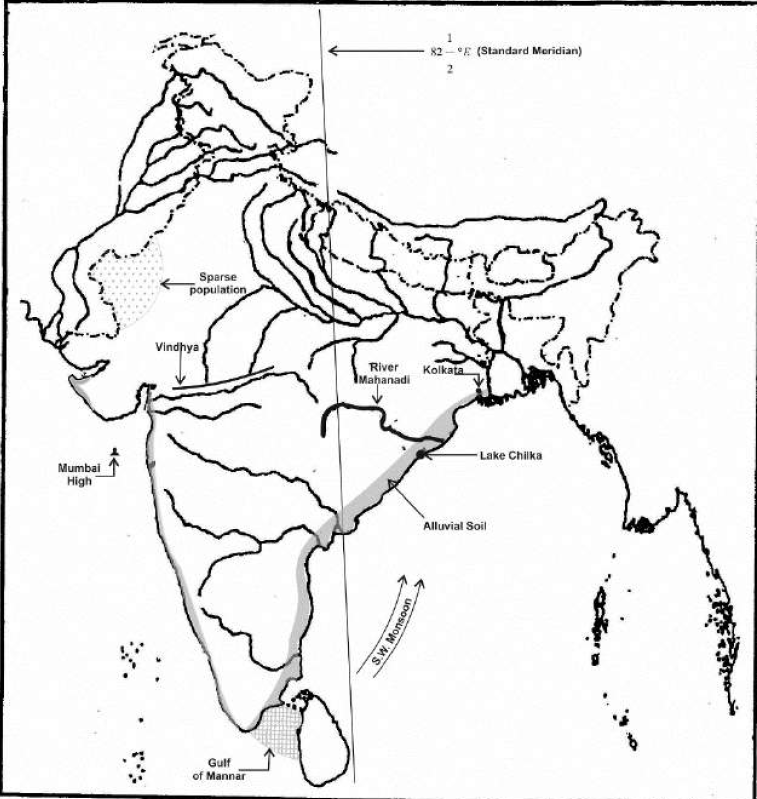 (a) What is the name given to the climate of India? Mention any two factors responsible for such a type of climate.

(i) The winds that bring heavy rain to Cherrapunji

(ii) The local wind that bring a light rainfall to South India and is good for tea and coffee crops.

(c) Give a geographical reason for each of the following:

(i) Kanpur has extreme temperature conditions.

(ii) Kochi is warmer than Mumbai even though both lie on the western coast of India.

(iii) The Ganga Plain gets the monsoon rain much later than the west coast of India.

(d) Study the climatic data of station x given below and answer the questions that follow: [3]

(a) (i) Tropical monsoon climate.

(c) (i) Kanpur lies in the interior, far from moderating effect of the sea.

(ii) Kochi is warmer because it is closer to the Equator than Mumbai.

(iii) That is because the Monsoon winds come to India from the south west and so reach the west coast before it can reach the Ganga plain.

(iii) East coast. It gets most of the rain in the season of retreating monsoon.

(b) Mention two similarities between red soil and laterite soil.

(c) Give a geographical reason for each of the following:

(i) Alluvial soil differs in texture.

(ii) Black soil does not get leached.

(a) Removal or destruction of top soil is called soil erosion.

(b) Both are red in colour because of the presence of iron oxide / both are infertile soils / both are friable / both are not moisture retentive /both are poor in organic matter. (Any two)

(c) (i) Alluvial soil is coarse in the upper valley of the rivers because the eroded matter is carried away by the fast flowing river but in the lower course, the river reduces its speed and the soil particles become finer due to attrition or because the load itself gets eroded.

(ii) Black soil does not get leached because it is clayey and sticky and moisture retentive and therefore the rain cannot wash out the silicates.

(iii) Khadar is the newer alluvium which keeps getting replenished by the river bringing down more eroded material.

(d) (i) Sheet erosion is the slow removal of a thin layer of soil by rainwater washing it away.

(ii) Soil conservation refers to the efforts made to prevent soil from getting eroded.

(iii) In situ means to develop in one area without any movement. It refers to residual soil.

(a) (i) Name the forest which is commercially most important in India.

(ii) Name two trees which grow in this forest.

(b) (i) Name the forests which grow on the wind ward slope of the Western Ghats.

(ii) Why do such forests grow in this region?

(c) To which type of forest do the following trees belong?

(d) Give three reasons for rapid depletion of forest resources in India in the past.

(a) (i) Tropical deciduous forest

(b) (i) Tropical evergreen forest

(d) Land was cleared for cultivation, industrialization and urbanization.

(a) “Without irrigation, development of agriculture is difficult in India.” Clarify the statement by giving two reasons.

(b) Mention two factors which are essential for the development of tube well irrigation.

(c) Give one reason for each of the following:

(i) The Northern Plain of India is found suitable for canal irrigation.

(iii) Although expensive, yet, sprinkler irrigation is gaining popularity in recent times.

(d) (i) What is rain water harvesting?

– Some crops like rice and sugarcane need more water.

– To cater to increasing demand of food and cash crops there is a need to grow crops all the year round.

(c) (i) Canal irrigation is popular in Northern plains because it has perennial rivers and land is soft enough for canal to be constructed from the rivers to the fields.

(iii) As it helps to conserve water.

(d) (i) It is a technique of increasing the recharge of ground water by capturing and storing rain water.

(ii) To make water available for future use.

To avoid flooding of roads.

(a) (i) Name any three types of coal found in India.

(ii) Which type of coal is mostly used in Iron and Steel Industries?

(i) An off-shore oil field of India.

(ii) An iron ore mine of Karnataka.

(i) Largest coal field of India.

(d) (i) Name the metal extracted from Bauxite.

(c) (i) Raniganj in West Bengal

(a) Mention any two reasons for the importance of agriculture in India.

(b) With reference to rice cultivation answer the following:

(i) Why does rice grow well in a soil with a clay like subsoil?

(ii) What is the advantage of growing rice in nurseries before it is transplanted?

(c) Study the picture given below and answer the questions that follow: 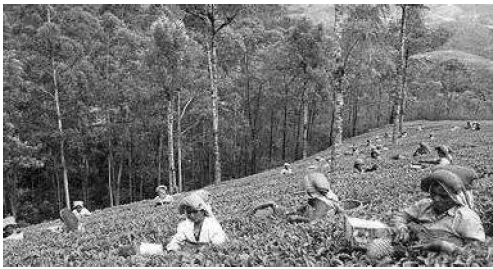 (i) Name one State where this crop grows well.

(ii) Why are mostly women employed to harvest it?

(iii) Mention two geographical conditions suitable for the cultivation of this crop.

(b) (i) Rice needs flooded fields and the subsoil of clay does not allow the water to percolate.

(ii) By growing rice in nurseries, we save water, and the plants can be transplanted in rows to facilitate the use of pesticides and harvesting.

(ii) Mostly women harvest the tea because it involves fine plucking, (two leaves and a bud) and women labourer can patiently pluck the same.

(d) (i) Shifting cultivation involves a patch of forest which is cleared, trees are cut down and the stumps set on fire. The patch is then cultivated for a few years and when the soil becomes infertile, the cultivator moves to a fresh piece of land and repeats the same procedure.

(ii) The bud from a good rubber tree is grafted on the seedling of a new rubber tree, Once the bud starts sprouting the shoot from the seedling is cut down and the bud then grows into a tree with all of the traits of the mother tree.

(iii) Oil cake is the residue of the oil seeds from which the oil has been extracted.

(a) Give two reasons for the importance of the jute industry in the Ganga-Brahmaputra delta region.

(b) Mention two problems of the Cotton Textile industry in India.

(c) (i) Give two reasons why the woollen industry is not a flourishing industry in India.

(d) With reference to the silk industry, answer the following:

(i) Why is Karnataka the largest producer of mulberry silk?

(iii) Name one silk weaving centre each in U.P. and in Tamil Nadu.

(a) Availability of raw material as it is a jute producing area / Plenty of clean water for retting / availability of labour and transport facility. (Any two)

(b) Fluctuation in availability of raw material as it is agricultural based / outdated machines / frequent power cut.

(d) (i) Climatic condition of Karnataka is suitable for mulberry tree and so sericulture can be practiced.

(iii) UP – Mirzapur / Pratapgarh / Shahjahanpur (any one)

(a) Mention two advantages that a mini steel plant has over an integrated iron and steel plant.

(b) (i) Name an iron and steel plant which was established with British collaboration.

(ii) From where does it get its supply of:

(c) Give a reason for each of the following:

(i) Products made from petrochemicals are growing in popularity.

(iii) The electronics industry contributes to the development of the country.

(d) Name the industrial product for which the following centres are well known:

(b) The iron and steel plant at Durgapur was established with British collaboration.

(ii) A heavy engineering industry requires a huge capital investment because it requires a big plot of land, a big labour force, consumes power and the raw material is heavy and expensive.

(iii) The electronic industry is a fast developing industry because electronics are used in many fields, computers, entertainment, medicine, engineering and education which is important for the development of a country.

(a) Mention two advantages and one disadvantage of waterways.

(b) Roadways are always considered more important than any other means of transportation. Give two reasons in support of the statement.

(c) (i) Mention any two sources of waste.

(ii) What are Biodegradable waste?

(d) Explain briefly the meaning of the following terms:

(a) Advantage – causes no pollution safer and can allow movement of heavy load / cheaper Disadvantage – does not connect all places / slower / depends on navigability of water source.

(ii) It is a waste which decompose through the actions of bacteria, fungi and other living organisms.

(d) (i) Composting of waste is an aerobic method of decomposing solid wastes.

(ii) Incineration – It is the method of burning the waste to reduce its weight and volume so that it can be disposed easily.

(iii) Segregation – It refers to separation of waste into different categories of waste. The most popular segregation is biodegradable and non-biodegradable.

We hope ICSE Class 10 Geography Question Paper Solution 2016 must have provided an insight into the 2016 Question paper and their solutions. Going through this paper solution will surely help students in their exam preparation. Students can also find the answers of other papers of ICSE Class 10 Previous Years Questions by clicking here. Happy Learning and stay tuned to BYJU’S for the latest update on ICSE/CBSE/State Boards/Competitive exams. Also, don’t forget to download the BYJU’S App.