ICSE Class 10 Geography Question Paper Solution 2017 is available here for students practice. Solving the question paper will give an idea to students on types of questions asked in the year 2017 and the difficulty of the exam. Practicing the questions from the 2017 ICSE Class 10 Geography Question paper will also give students an understanding of the exam trend over the years. They can analyse how the way of asking the questions in the exam has been changed. Thus, knowing it, they can prepare in a better way for the upcoming ICSE Exam.

Students can have a look at the ICSE Class 10 Geography Question Paper Solution 2017 below: 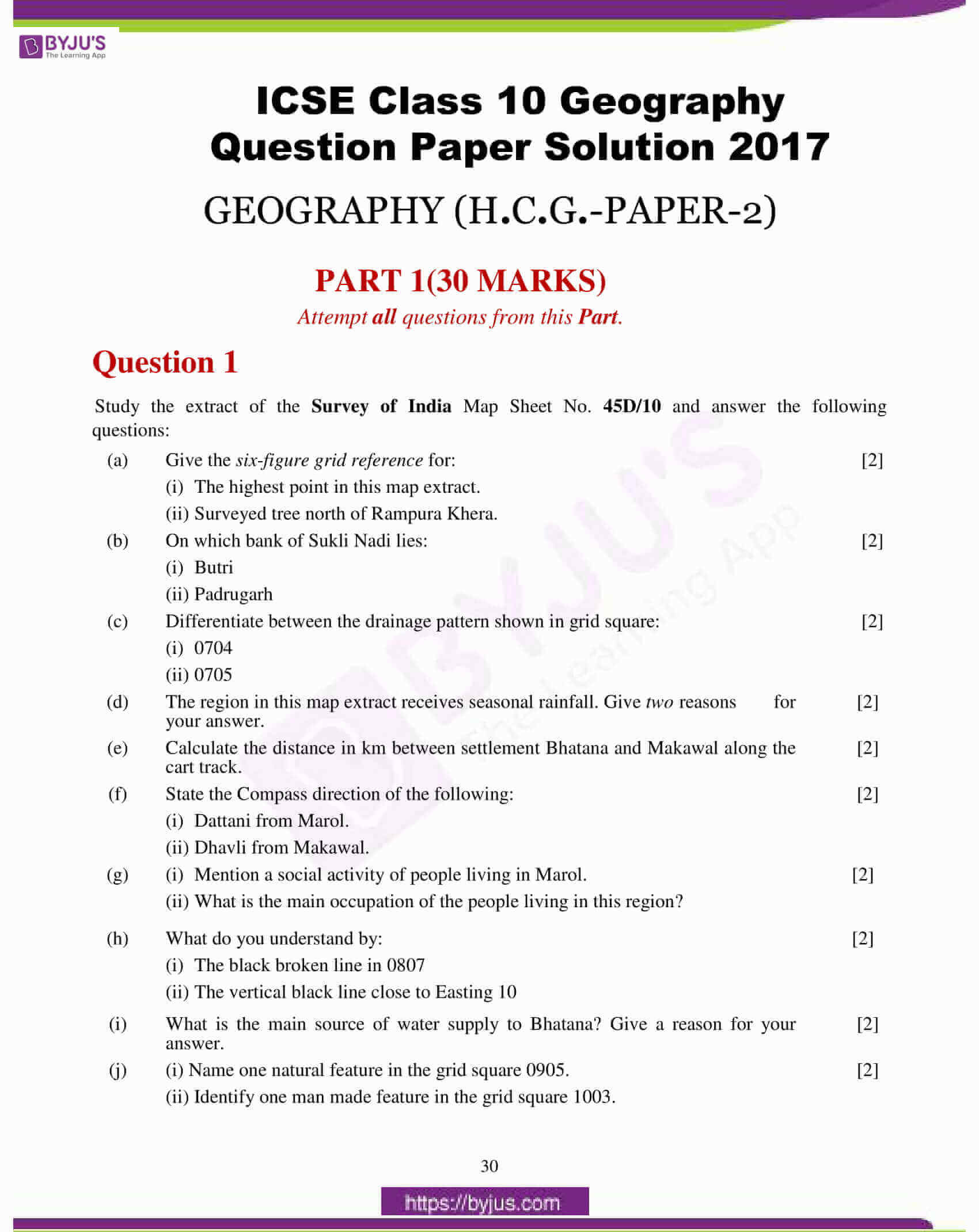 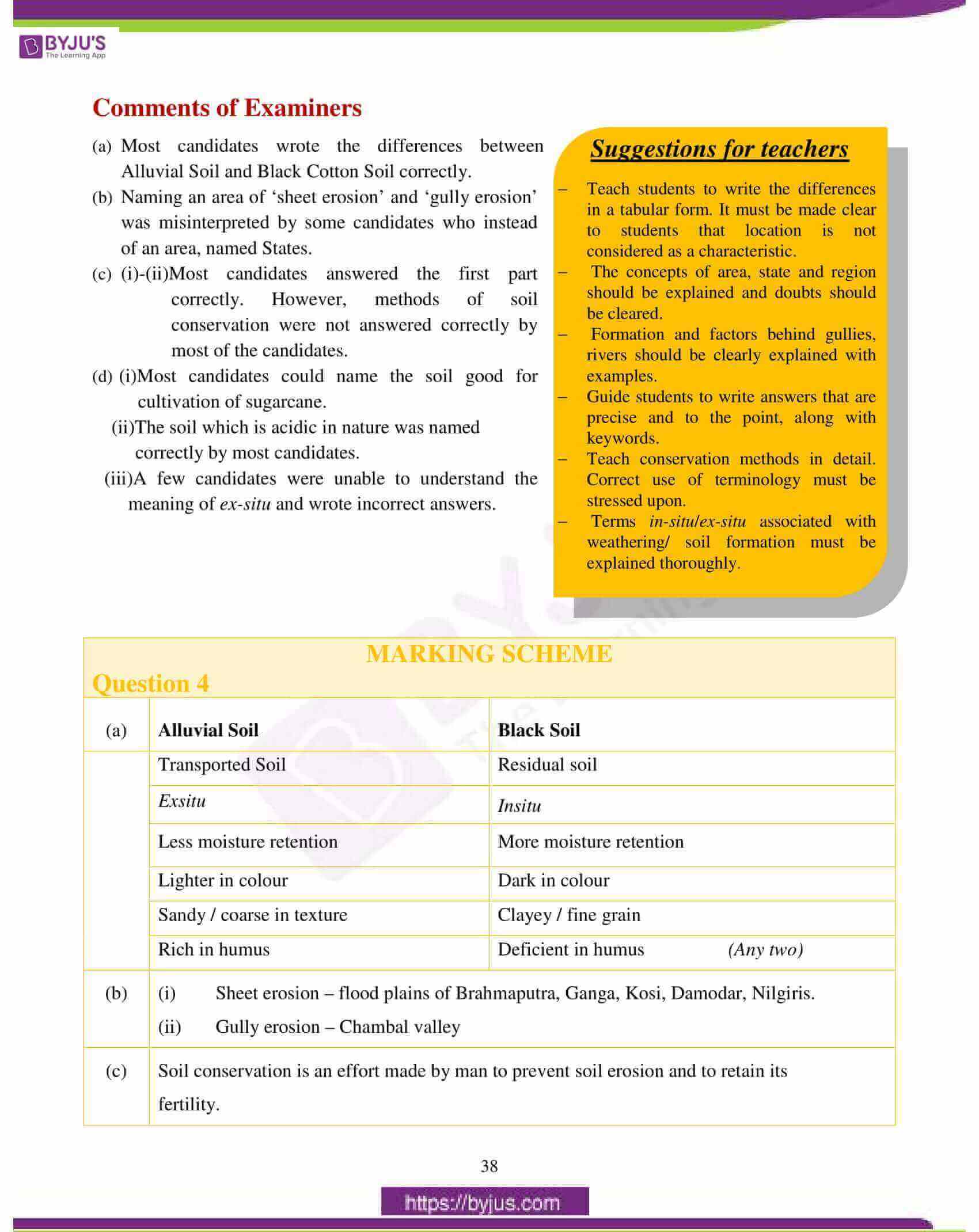 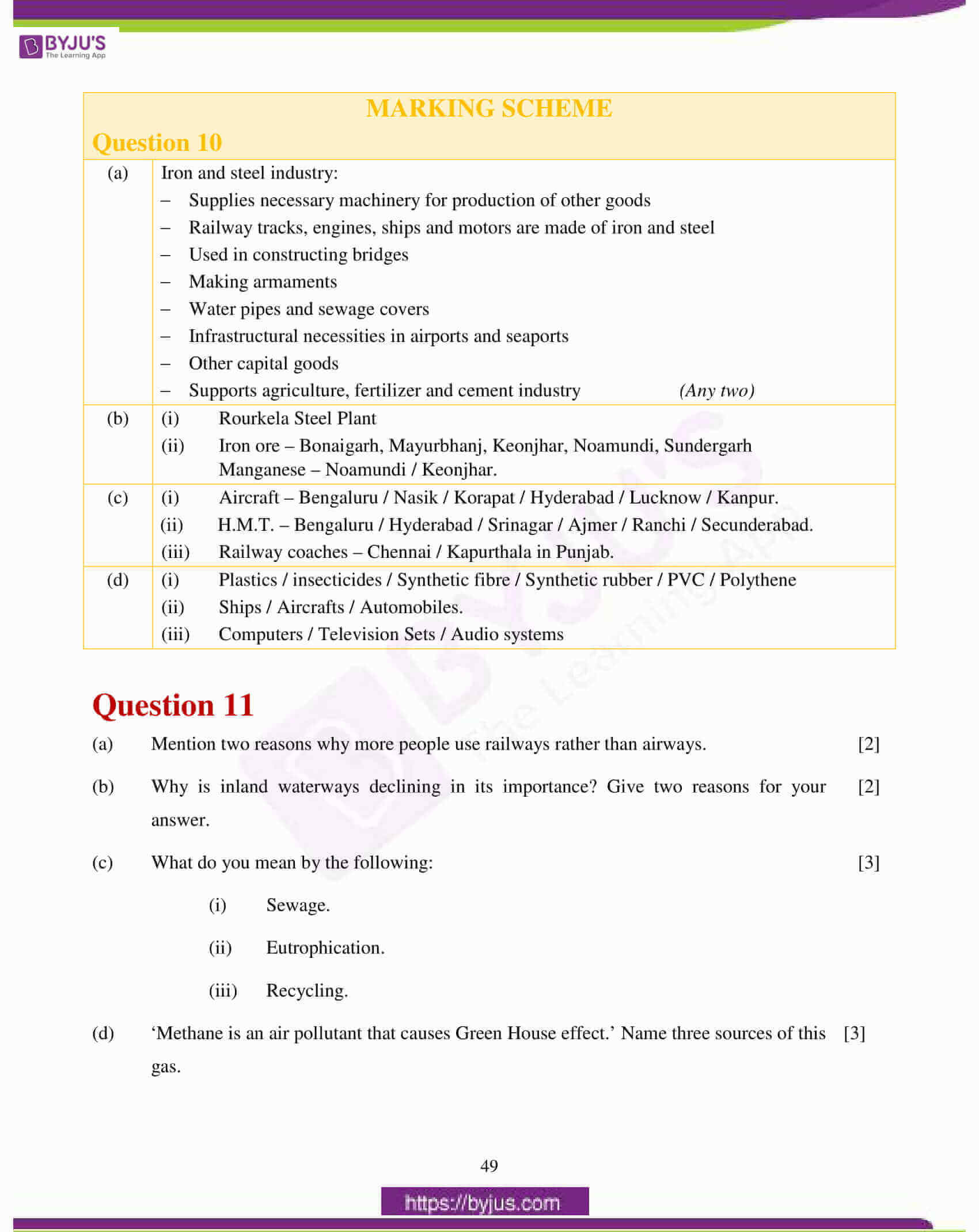 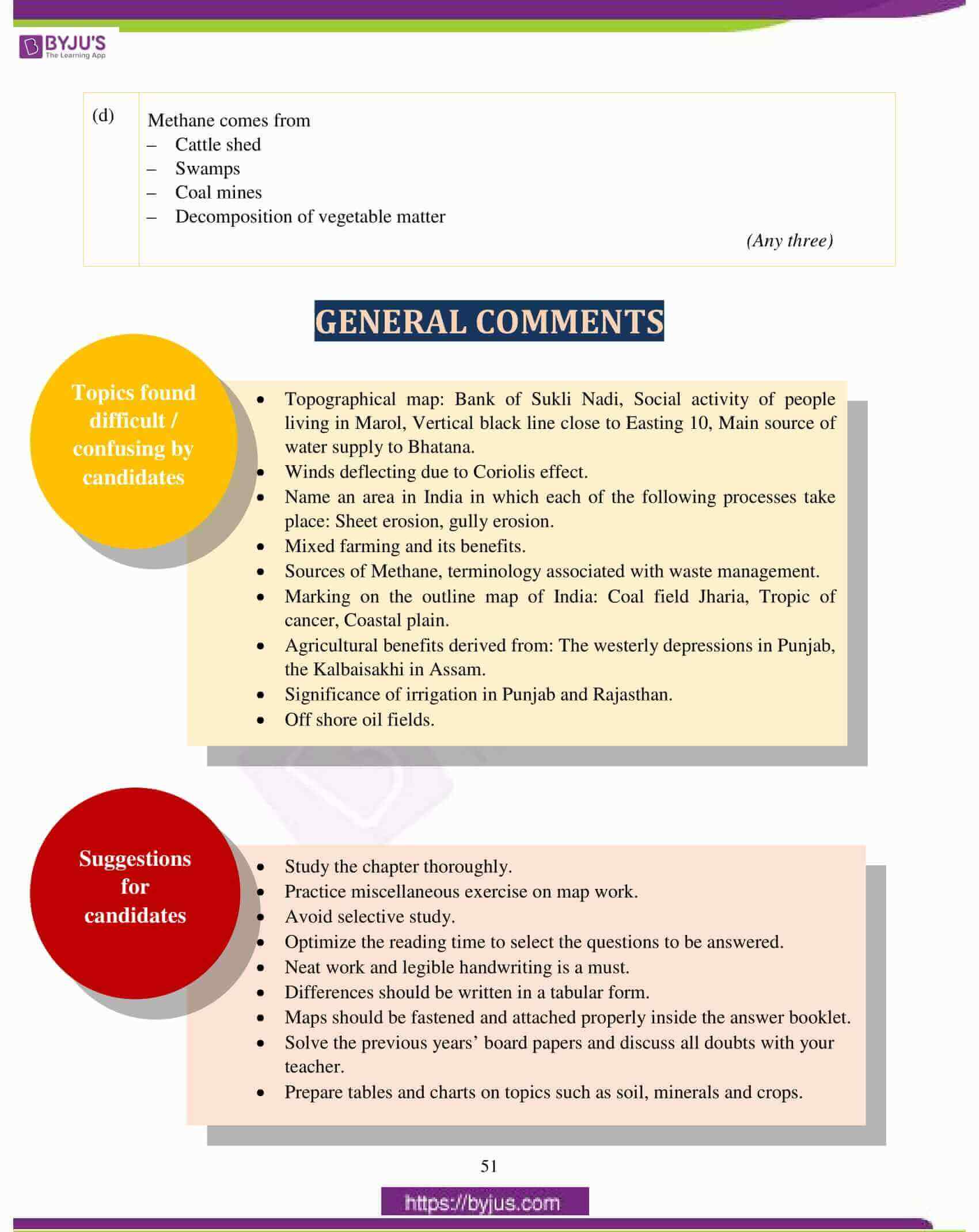 Question 1: Study the extract of the Survey of India Map Sheet No. 45D/10 and answer the following questions:

(a) Give the six-figure grid reference for:

(i) The highest point in this map extract.

(b) On which bank of Sukli Nadi lies:

(c) Differentiate between the drainage pattern shown in grid square:

(d) The region in this map extract receives seasonal rainfall. Give two reasons for

(f) State the Compass direction of the following:

(i) Dattani from Marol.

(g) (i) Mention a social activity of people living in Marol.

(ii) What is the main occupation of the people living in this region?

(h) What do you understand by:

(i) What is the main source of water supply to Bhatana? Give a reason for your answer.

(ii) Identify one man made feature in the grid square 1003

(i) Perennial lined wells – are marked all over the settlement and the seasonal tank is dry in the dry season.

embankment / perennial lined well. (Any one)

Question 2: On the outline map of India provided:

(a) Draw and name the Tropic of Cancer.

(b) Label the river Godavari.

(d) Mark C on the coal fields in Jharia.

(e) Mark with an arrow and name the NE monsoon over the Bay of Bengal.

(f) Shade and name the Gulf of Kutch.

(g) Shade and name the coastal plain that receives rainfall in October-November.

(h) Mark with a dot and name Delhi.

(i) Shade a region with Black Cotton Soil.

(j) Use an arrow to point at a densely populated state in South India. 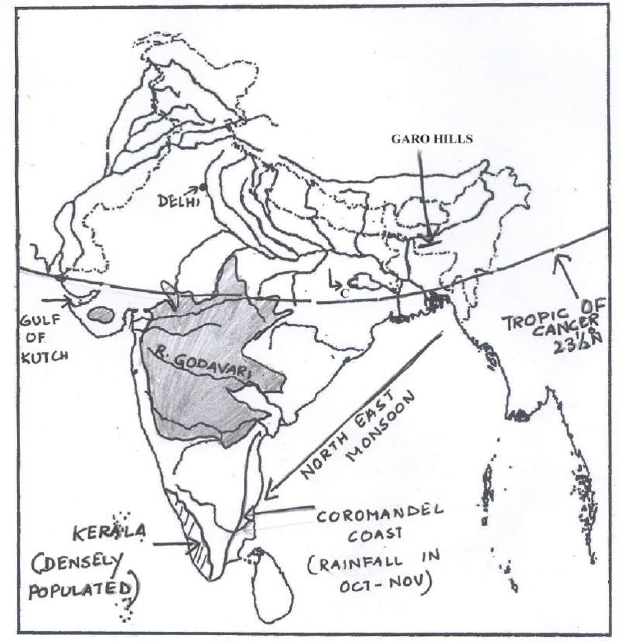 (a) Mention the four seasons that prevail in India stating the months for each.

(b) State the agricultural benefits derived from:

(i) The Westerly Depressions in Punjab.

(ii) The Kalbaisakhi in Assam.

(c) Give a reason for each of the following:

(ii) The Summer Monsoon winds blows over the Arabian Sea from the South-west.

(d) Study the climatic data given below and answer the questions that follow:

(i) What is the annual range temperature of the station?

(ii) What is the total annual rainfall experienced by the station?

(iii) Why would it be correct to presume that the station lies in the interior and not on the coast?

(a) Cold/winter – December to February

Hot /summer – March to May

(b) (i) Westerly Depression – wheat and barley in Punjab

(c) (i) Kolkata is situated in the Ganga delta region whereas Lucknow is located inland in the middle course of the Ganga. The Bay of Bengal branch of the SW monsoon is exhausted as it blows up the Ganga Plain. Therefore, Kolkata receives more rainfall than Lucknow.

(ii) As the SE trade winds cross the Equator they are deflected to their right (according to Ferrel’s law) and blow towards the West coast from the South West when they cross the Arabian Sea.

– The Arabian Sea branch of SW monsoon blows parallel to the Aravalli that do not intercept the winds. Therefore, no rain.

– Less than 25 cm rainfall occurs in winter due to the westerly depressions.

– The Bay of Bengal branch of SW monsoon is exhausted by the time it reaches the windward slopes of the Aravallis. These winds shed no rain on the leeward side where the Thar Desert lies.

– Humidity is very low in summer. The moisture evaporates before it could rain.

(iii) It is in the interior because the annual range temperature is high as 24.2°C/ the rain is only 112.9 cm, while a place on the coast would have a much heavier rainfall.

(b) Name an area in India in which each of the following processes take place:

(i) Arid and Semi-Arid region.

(d) Name the soil which:

(i) is good for cultivation of sugarcane.

(ii) is acidic in nature.

(c) Soil conservation is an effort made by man to prevent soil erosion and to retain its fertility.

A method of soil conservation:

(ii) Construction of dams and barrages

(a) How do trees in the Tropical desert forests adapt themselves to the dry climate?

(b) Name the tree as per its characteristics given below:

(i) The wood is hard and suitable for ship building.

(ii) The stilt roots are underwater during high tide.

(c) Explain why the forest cover in India is shrinking?

(d) Name the natural vegetation found in the following regions:

(i) The western slopes of the Western Ghats.

(a) Trees in the tropical desert forests adapt themselves as they have long roots, small leaves, hard thorns or sharp spines / xerophytic in nature. (Any two)

− Overgrazing by the cattle

(a) Give a reason for the significance of irrigation in:

(i) Tube wells are common.

(c) Give one Geographical reason for each of the following:

(i) Sprinkler irrigation is practised in arid and semi-arid regions.

(ii) A tube well should be installed in a fertile and productive region.

(iii) Canal irrigation is more suitable in the Northern Plains.

(d) Study the diagram below and answer the questions that follow: (i) Name the activity shown in the diagram.

(ii) Give two objectives of the activity named in (d) (i).

(a) (i) Punjab – Rainfall is uncertain and varies from year to year and place to place / seasonal / water needed for Rabi crops (winter). The region is rich in agriculture.

(c) (i) Sprinkler irrigation – water is supplied through pipes – there is no loss of water by evaporation. Therefore, minimum wastage.

(ii) A tube well must be installed in a productive region so that the cost of construction and operation of the tube well may be recovered from increased farm production / it is less expensive / can be installed in the farming area / occupies less space / free from pollution.

− To meet the increasing demand for water

− To avoid flooding of roads

− To raise the groundwater level

− To supplement household requirements of water during the hot summers

(a) Give the names of four important types of iron ore found in India. [2]

(i) An offshore oil field in the Gulf of Cambay.

(ii) An oil refinery in Bihar.

(c) (i) Name the state that produces the largest amount of limestone.

(d) State an important industrial use of:

(a) Four types of Iron ore mined in India:

(b) (i) Aliabet island close to Bhavnagar in the Gulf of Cambay.

(d) Industrial use of

(i) Manganese – raw material for making steel / paints / glass. (Any one)

(b) Give the Geographical requirements for the cultivation of Sugarcane.

(c) Explain the following terms and name the crop with which each is associated:

(d) Give geographical reasons for the following:

(i) Regular pruning is essential for tea bushes.

(a) Mixed farming – cultivation of crops and livestock rearing on the same farm.

One benefit – cattle and poultry do not need extra expenditure; they thrive on farm waste / Livestock provides substitute income when crops are not ready.

(b) Geographical requirement for Sugarcane cultivation:

(c) (i) Retting – It is a microbiological process in which the jute bundles are submerged in soft, clean water for 2 – 3 weeks, this helps to loosen the outer bark and helps in removal of the fibre from the stalk.

(ii) Ratooning – It is a shoot from the root-stock of sugarcane which has been cut leaving the root intact in the soil.

(iii) Ginning – It is the process in which cotton fibre is separated from the seed / raw material.

(iii) Millets can withstand high temperatures and drought / it is a hardy crop / can grow in areas of scanty rainfall / in adverse climatic conditions.

(a) Differentiate between Mineral-based Industry and Agro-based industry giving one example for each.

(b) ‘Though Uttar Pradesh has the largest number of sugar mills yet Maharashtra is the largest producer of sugar.’ Give any two reasons to justify the statement.

(c) Give the geographic term for each of the following:

(iii) The rearing of silk worms to obtain silk.

(d) With reference to the cotton textile industry answer the following questions:

(i) Give two reasons why Mumbai is an important cotton textile industry.

(a) Mineral based industries use raw materials obtained from mines / e.g. iron and steel / cement / shipbuilding.

(b) Maharashtra is the largest producer of sugar

− Mills are near the plantation (no loss of sucrose and cost of production is low).

− The sugar lobby is responsible for large capital investment; hence farmers are interested in growing sugarcane. (Any two)

(i) – Easy availability of raw material from the Black Soil region of Maharashtra.

– Well connected with hinterland by roads and railways.

– Abundant supply of soft water for dyeing and bleaching.

(a) ‘The Iron and Steel industry constitutes the backbone of modern industrial economy.’

Give two reasons to justify the statement.

(b) (i) Name an Iron and Steel Industry set up in Orissa with the help of a famous German firm.

(ii) From where does the industry named in b (i) get its iron ore and manganese?

(c) Name a manufacturing centre for each of the following industries:

(d) Name two products each of the following industries:

(a) Iron and steel industry:

− Supplies necessary machinery for production of other goods

− Railway tracks, engines, ships and motors are made of iron and steel

− Infrastructural necessities in airports and seaports

(b) (i) Rourkela Steel Plant

(a) Mention two reasons why more people use railways rather than airways.

(b) Why is inland waterways declining in its importance? Give two reasons for your answer.

(c) What do you mean by the following:

(d) What do you mean by the following:

(a) More people travel by railways than by airways because:

– Airways do not allow passengers to carry much luggage.

– Not all places are connected by airways. (Any two)

(b) Indian waterways is declining its importance because:

– It is much slower than roadways and railways.

(c) (i) Sewage: the waste water discharge from domestic premises like residences, institutions, and commercial establishments is known as sewage.

(ii) Eutrophication: Type of water pollution / it is process of depletion of oxygen from the water bodies either through natural or due to human activities / This process takes place due to introduction of nutrients and chemicals through discharge of domestic sewage, waste from industries and from agricultural fields.

these materials and making them into new products.

We hope ICSE Class 10 Geography Question Paper Solution 2017 must have helped students in their exam preparation. We have also compiled the solutions of other subjects of ICSE Class 10 Previous Years Question Papers at one place. Students can access them by clicking here. Stay tuned to BYJU’S for the latest update on ICSE/CBSE/State Boards/Competitive exams and don’t forget to download the BYJU’S App.