Let us look into the topics that are covered in the chapter.

This chapter explains the basics of humans reproduce, how the zygote is formed and more. Go through the chapter thoroughly and then try solving the Selina questions. Compare your answers with the ICSE Selina Class 8 Biology Chapter 3- Reproduction in Humans solutions by BYJU’S and evaluate your preparation so far.

1. Put a tick mark against the correct alternative in the following statements:

(a) The testes are located within the:

(b) Amoeba is most commonly reproduced by:

(c) Identify the stage which is formed after the fertilization of the egg by the sperm?

(d) Internally, the uterus opens into:

(e) Which one of the following represents the correct sequence in the life history of a butterfly?

(a) Egg and sperm

2. The egg is spherical in shape with a nucleus.

2. Sperm has a head with the nucleus, middle piece and tail.

1. In sexual reproduction, the two sexes produce sperm and eggs by the male and female.

2. To produce a new individual the sperm has to reach the ovum and fuse with it. e.g.. Humans, bird, reptile, etc.

1. It involves the production of an offspring from a single parent without the fusion of reproductive cells (gametes).

Budding is a process where buds grow on the external parent body. The buds fall off when they are large enough.

(a) Fertilization: Zygote is formed by fusing sperm and eggs from the opposite partners. It is called fertilization.

(b) Implantation: The fertilised egg (zygote) soon starts developing and by the time it reaches the uterus, a small ball of numerous cells is already formed. This is a kind of embryo which forms a pit in the wall of the uterus and gets fixed in it. Thus implantation occurs, which is the natural way of fixing the embryo in the uterus wall. This produces the state of pregnancy.

(c) Puberty: Puberty is the period during which the reproductive systems of boys and girls mature. In girls, it starts at the age of about ten and the first sign of puberty is the development of breasts. In boys, it starts at about 11 years of age of the enlargement of the testes is its first sign. The sudden spurt in growth, shoulder girdle grows more than a hip girdle.

State the reason why testes lie outside the abdomen in a scrotum?

Why is it important that a very large number of sperms should be present in the semen?

Single ejaculation of semen has 20,000,000 to 40,000,000 sperms. But only 1 or 2 sperms go into the oviduct and fertilize the egg to form the Zygote. An individual is formed from the embryo. It is the sperm in the semen that is of importance, and therefore semen quality involves both sperm quantity and quality.

List the structures, in their correct sequence, through which the sperms must pass from the time they are produced in the testes to the time they leave the urethra.

Sperms are produced in testes. They pass as follows:

The sperm-producing tube is in the testes. The tubes join to form ducts leading to the epididymis which in turn leads into a muscular sperm duct. The two sperm ducts, one from each testis open at the top of the urethra.

State the functions of the following:

(a) Ovary: Ova (eggs) and secrete female sex hormones, oestrogen and progesterone are produced by ovaries.

(b) Testes: A pair of testes are present in the human male. The testes produce sperms.

Given here is a section of the female reproductive system of human beings.

(b) Name the part where fertilization occurs in human beings.

(b) Fertilisation occurs in the upper part of the oviduct. Sperm fuses with the egg and zygote are formed this is called fertilisation.

Given alongside is a diagram of the male reproductive system in humans. Label the parts indicated by numbers 1 to 5, and state their functions. 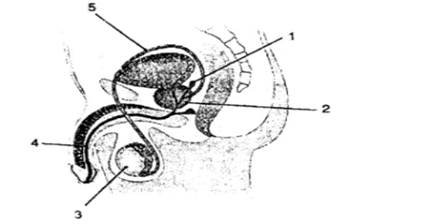 1. Seminal vesicle: A secretion which serves as a medium for the transportation of the sperms is produced by seminal vesicles.

3. Testes: Sperms are produced in the testes.

4. Urethra: Urethra passes through the penis and carries either urine or semen.

5. Sperm duct: The sperm pass through the sperm ducts.

Define the term metamorphosis. Briefly describe the various stages occurring in the life-cycle of a butterfly.

Metamorphosis: During normal development after the embryonic stage, a change in the form and often habits of an animal complete the transformation from an immature form to an adult form in two or more distinct stages.

The life cycle of a butterfly: The butterfly lays its eggs on the leaves of the plants. The newborn that comes out of the egg is called larva. It passes through various stages of development. The larva of the butterfly is also called Caterpillar. It is very active. It is very voracious. It feeds and moves actively and gains size.

It stops moving and eating and it is called a pupa. It is a resting stage. The pupa spins thread around itself and thus is enclosed in a covering. It is called a cocoon. This cocoon covers the pupa and is protective in function. During this stage, it forms the features of an adult. After attaining adulthood the pupa comes out of the cocoon after breaking it as an adult butterfly. The wings of the emerged butterfly are wrinkled and soft. After an hour these are fully stretched and it starts flying.