The chapter also explains about reflex action and reflex arcs. The detailed structure and function of a brain and the central nervous system are also given in the chapter.

1. Put a tick mark against the correct alternative in the following statements:

2. Beating of heart and respiratory movement

3. Intelligence and will power

(b) Balance of body is controlled by:

(c) The smell of good food causes watering of your mouth. It is a

Name the two types of coordination which take place in our body.

(a) Nervous coordination: By nerves and brain

(b) Chemical coordination: By hormones

You are driving your bicycle at a fast speed. Suddenly, a small boy comes in front of your cycle and, without wasting any time in thinking, you immediately apply the brakes and accident is avoided. What name is given to such an action?

Given below is the diagram of a neuron. Name the parts numbered 1-5.

Write one word in the space provided to complete the second pair of the related words pertaining to the nervous system.

(a) Stimulus and impulse

Stimulus: Any change in the environment that usually results in a change in the activity of the body. It is actually an influence.

Impulse: A wave of electrical disturbance that runs through the nerves.

(b) Receptor and effector

Receptor: The nerve cell on receiving the stimulus sets up the waves of impulses towards the central nervous system.

Effector: Any muscle or gland will contract or secrets when receiving an impulse from the brain.

(a) Name the three major divisions of the human nervous system.

(b) Name the three main parts of the human brain.

Give the function of each of the following:

(b) Optic nerve: optic nerves carries the reflection of the object from the retina to the brain. The image formed on the retina is in a reverted position and the correct picture is formed in the brain as the object is. The optic nerves arise from the side of the diencephalon. They innervate the retina of the eve and are sensory in nature.

(c) Facial nerve: Message and all expressions of the face, mastication work alone by the teeth, movement of the neck and the activities of the salivary glands to the brain are carried by the facial nerve. It arises from the side of the medulla. On the whole facial nerves are mixed in nature.

With the help of a suitable diagram describe the structures of a neuron. 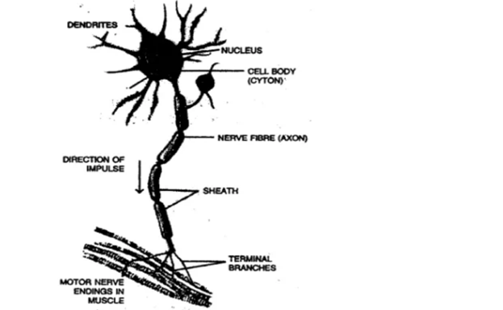 The nervous system consists of special cells called nerve cells or neurons. Cyton is the main cell body which gives out many processes called dendrites. From it, a very long process is given out. It is called axon or nerve fibre.

Briefly describe the structure of the cerebrum in the human brain and mention its functions.

The brain consists of the main three parts and lies in the cranial cavity of the skull.

Cerebrum: It is very large and forms two-thirds of the whole brain. A deep longitudinal groove separates the two hemispheres from each other is the median fissure. The outer surface is folded with ridges and grooves. The hemispheres are hollow from inside and their walls have outer and inner portions. The outer portion has cell bodies of the neurons and it is called grey matter. The wavery edges of the folded layer have numerous neurons to the extent of nine billion. The inner portion of the cerebrum has axons and it is called white matter.

1. It controls all the voluntary activities.

2. It is the seat of intelligence, consciousness and will power.