This Class 9 Selina Solutions helps you to attain a basic knowledge of Chemistry such as symbols, valency, radicals, compounds, chemical equations, atomic weights, molecular weight and calculation of relative molecular mass and percentage composition of a compound.

ICSE Selina solutions act as a perfect study material that is required for your ICSE examination. Studying this ICSE Selina Solution for Class 9 Chemistry will also help you to get a basic knowledge of introduction to Chemistry. 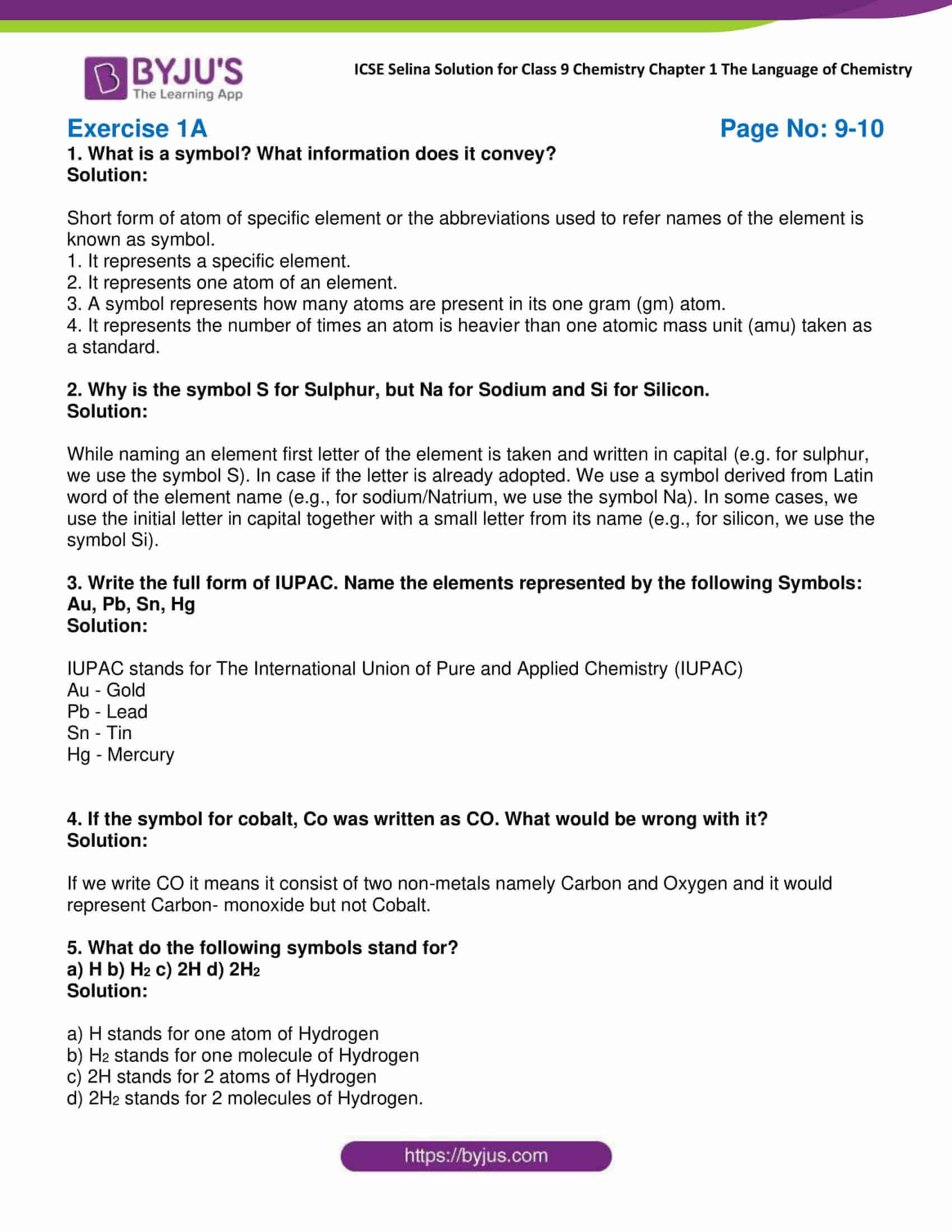 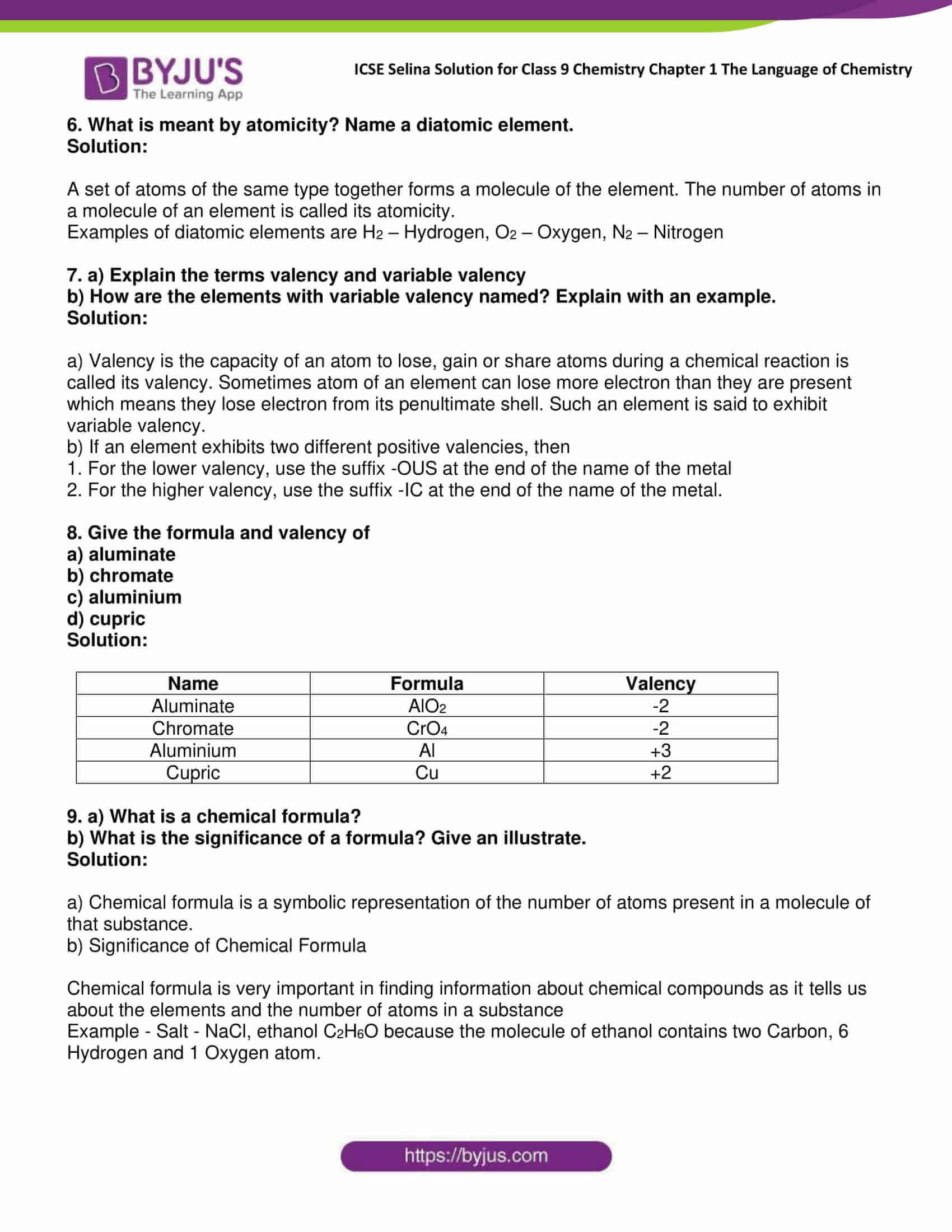 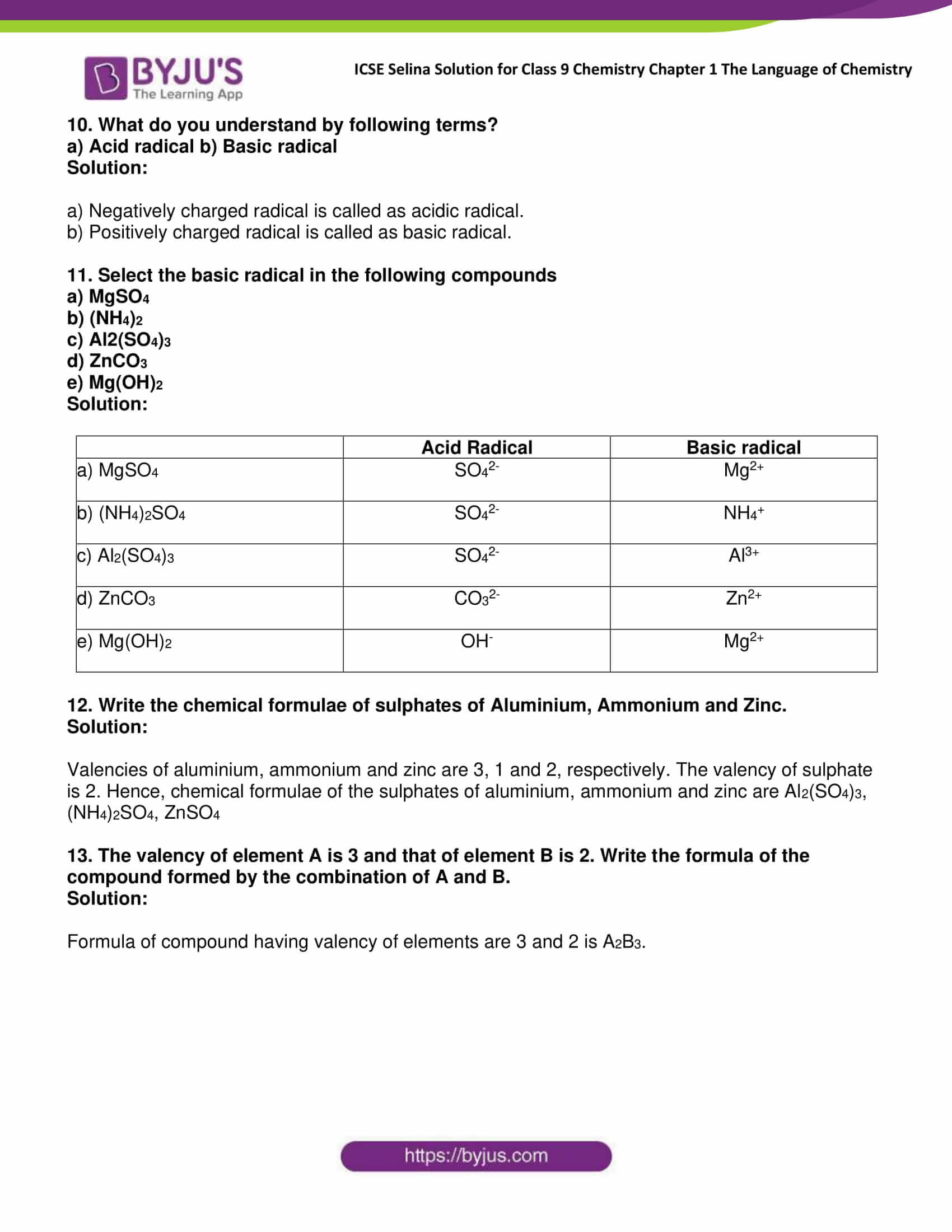 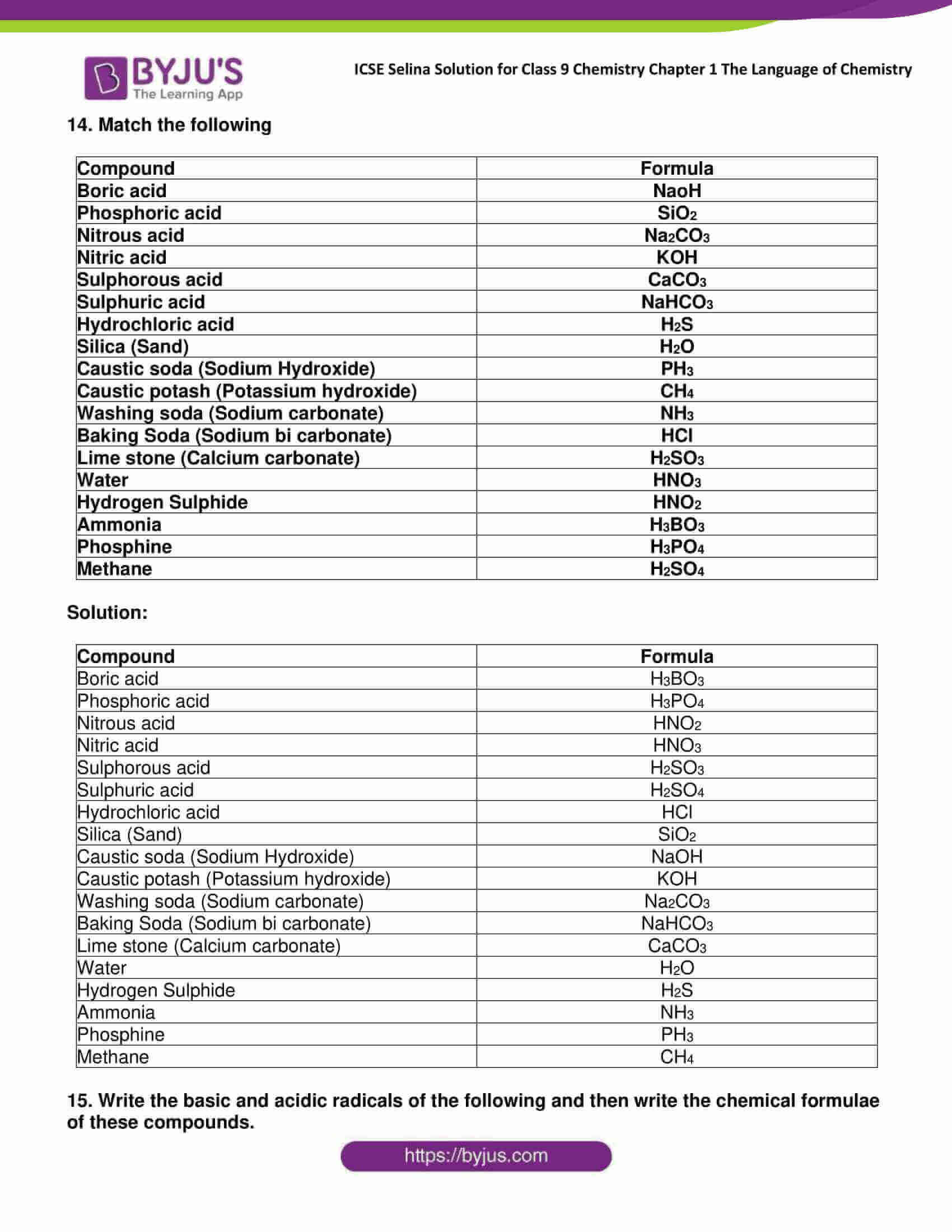 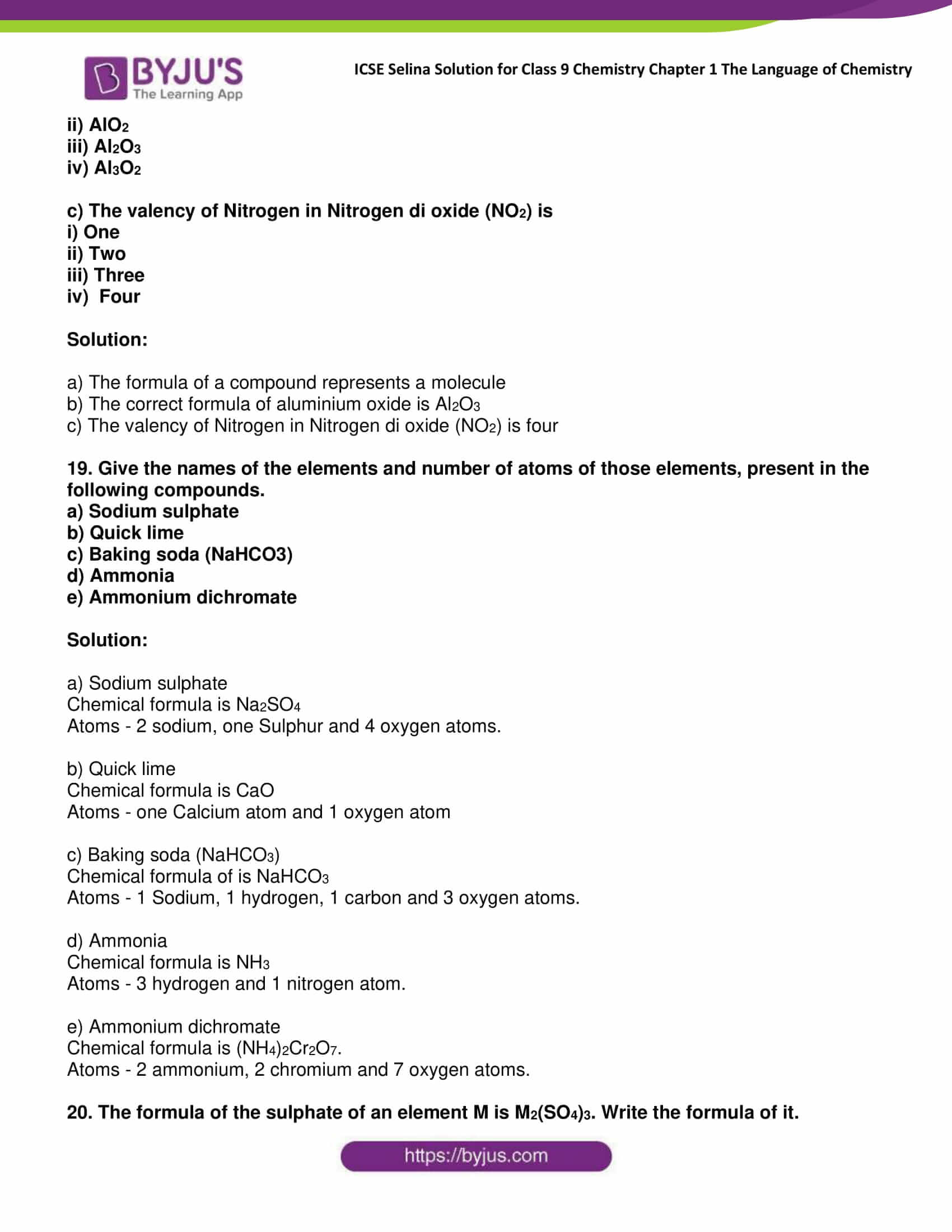 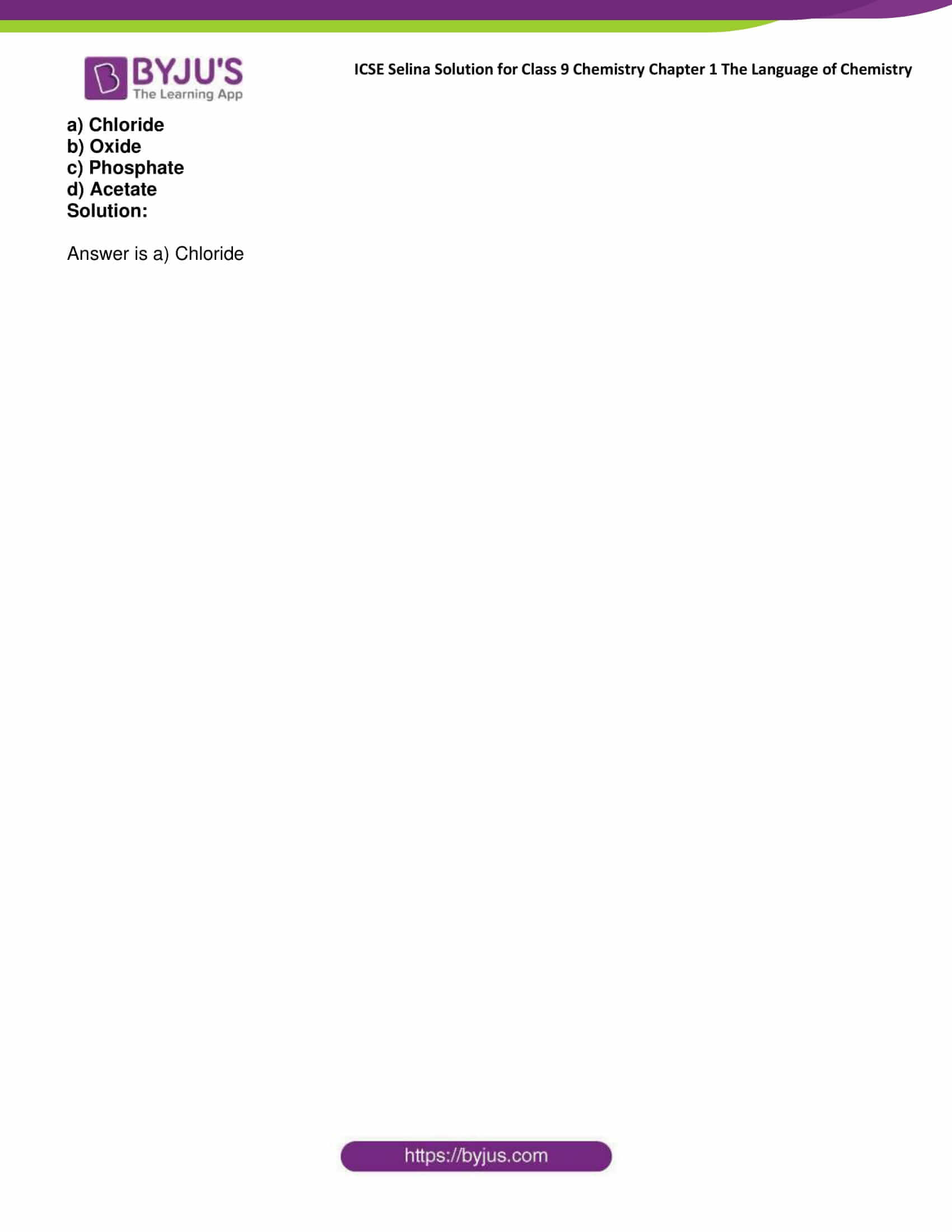 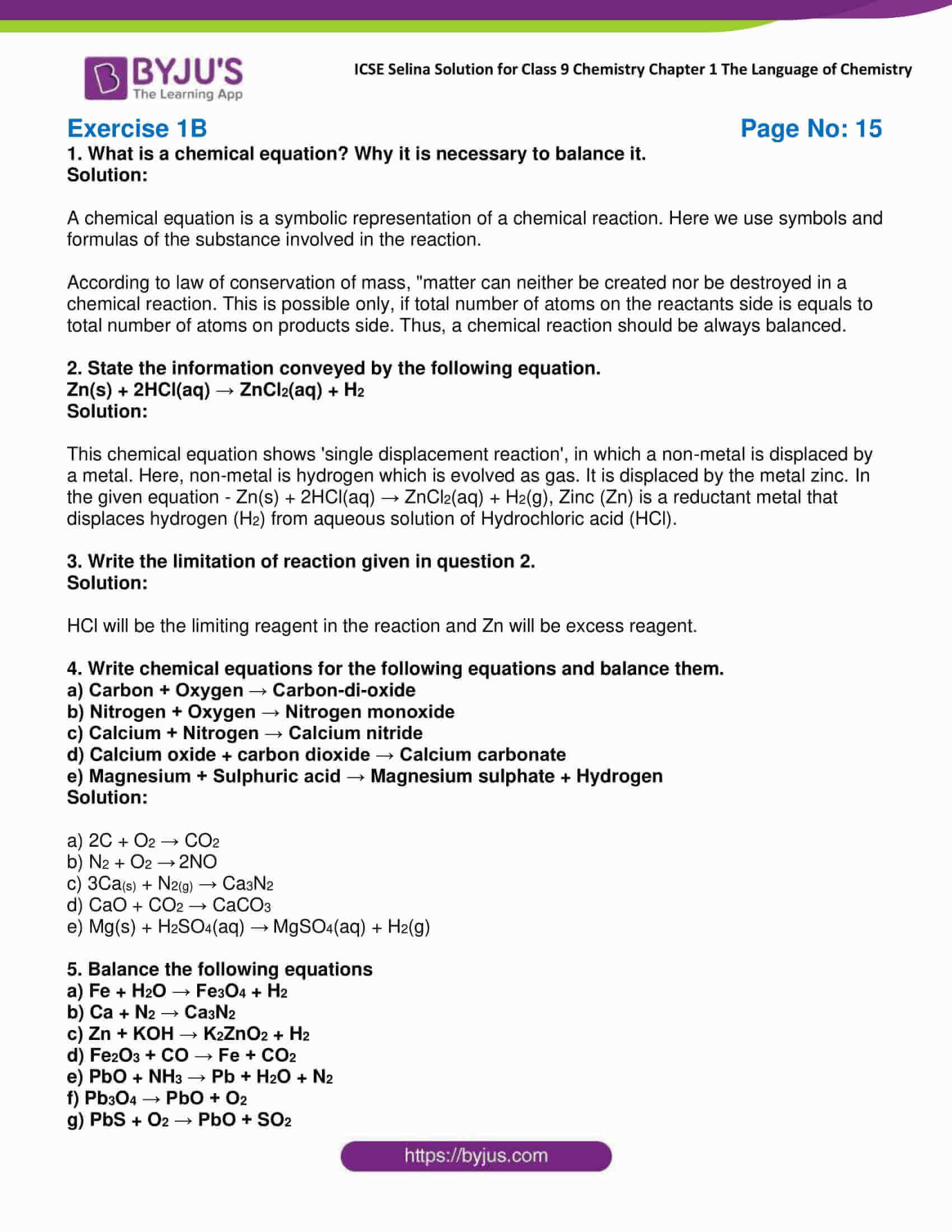 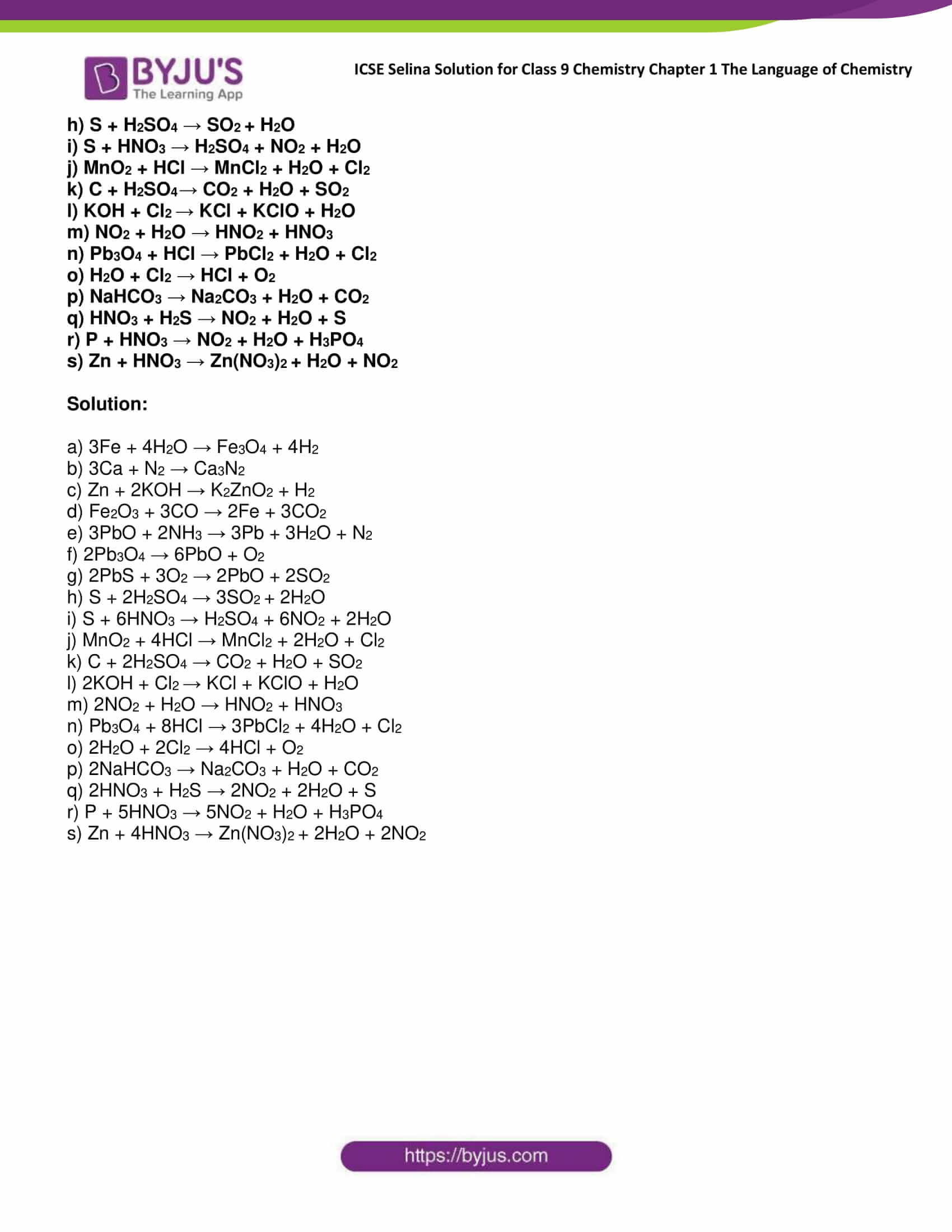 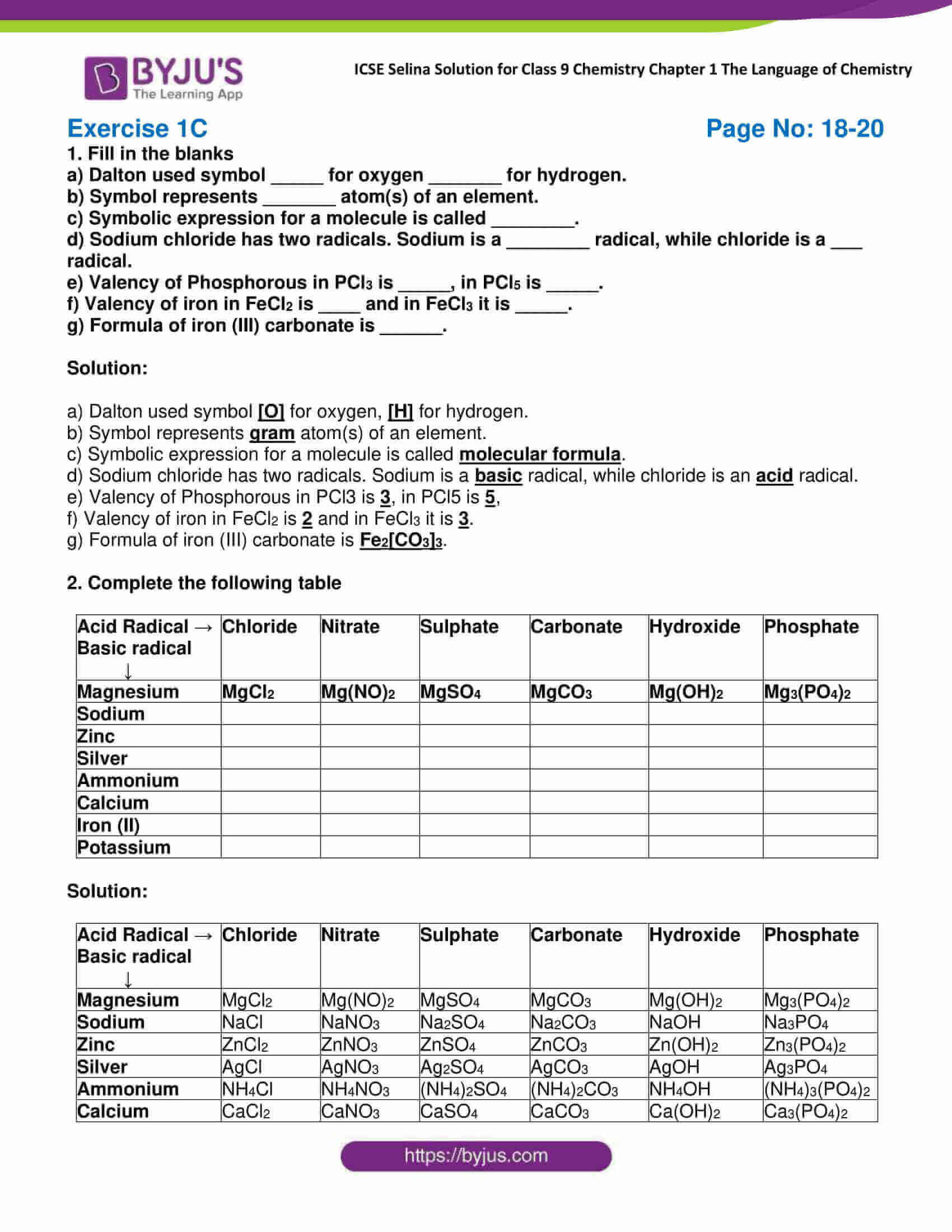 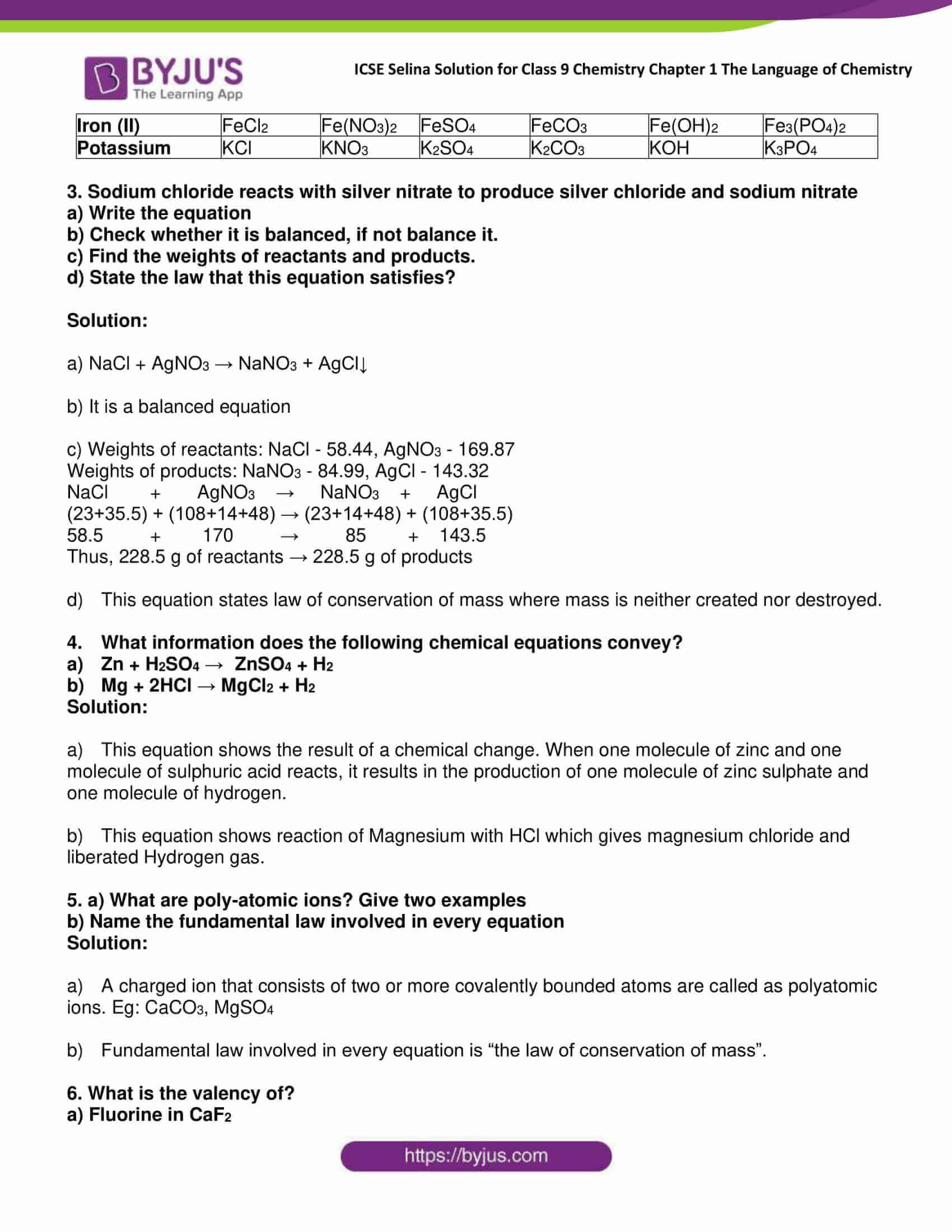 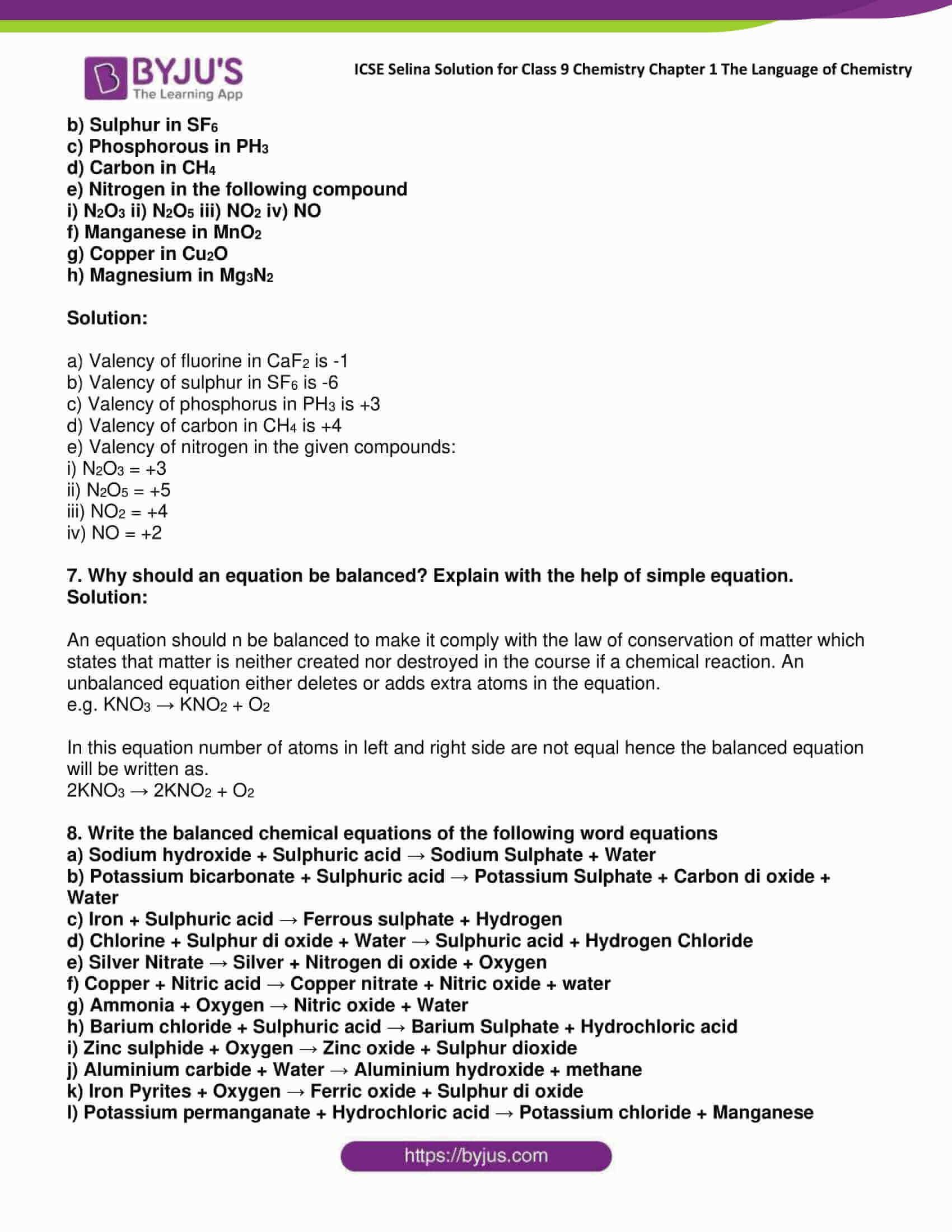 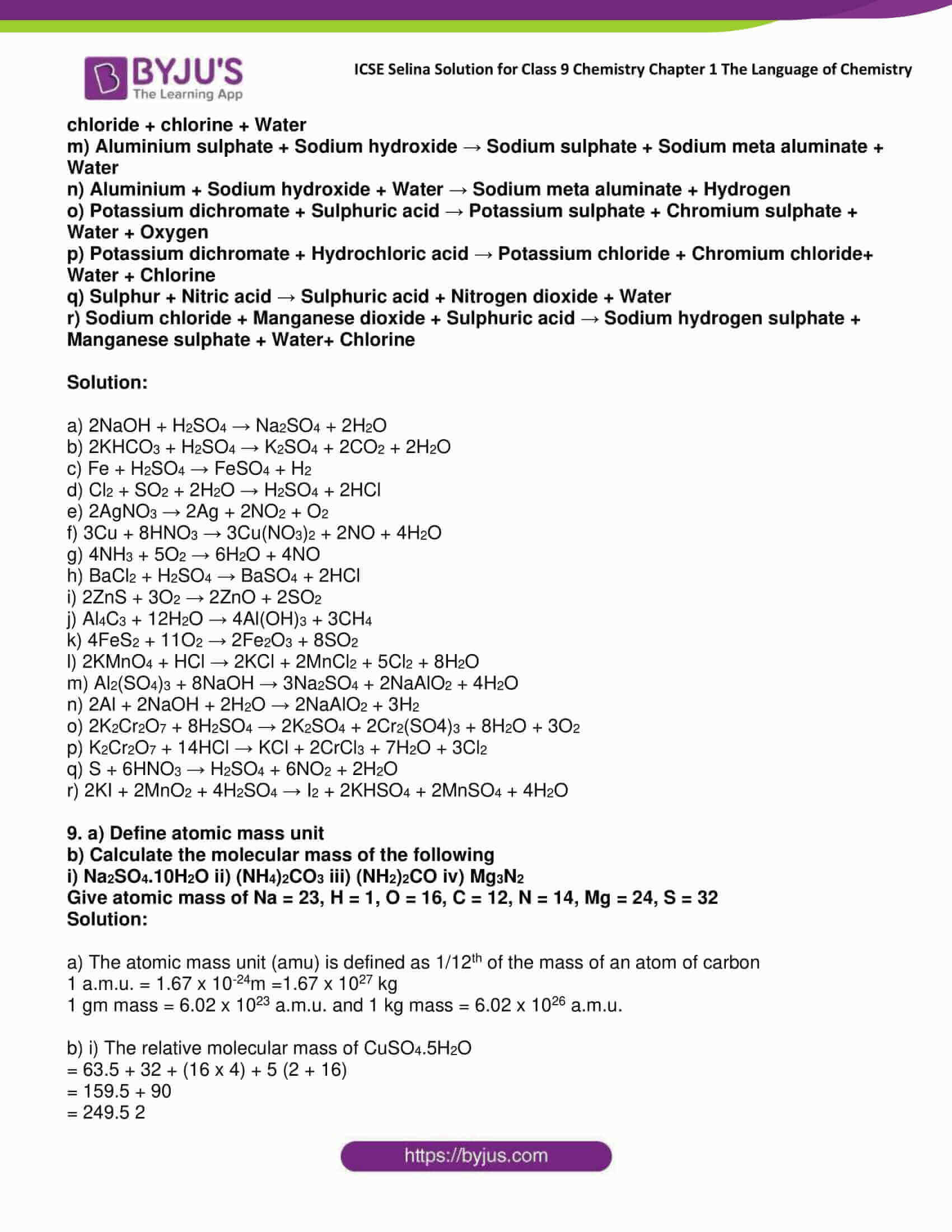 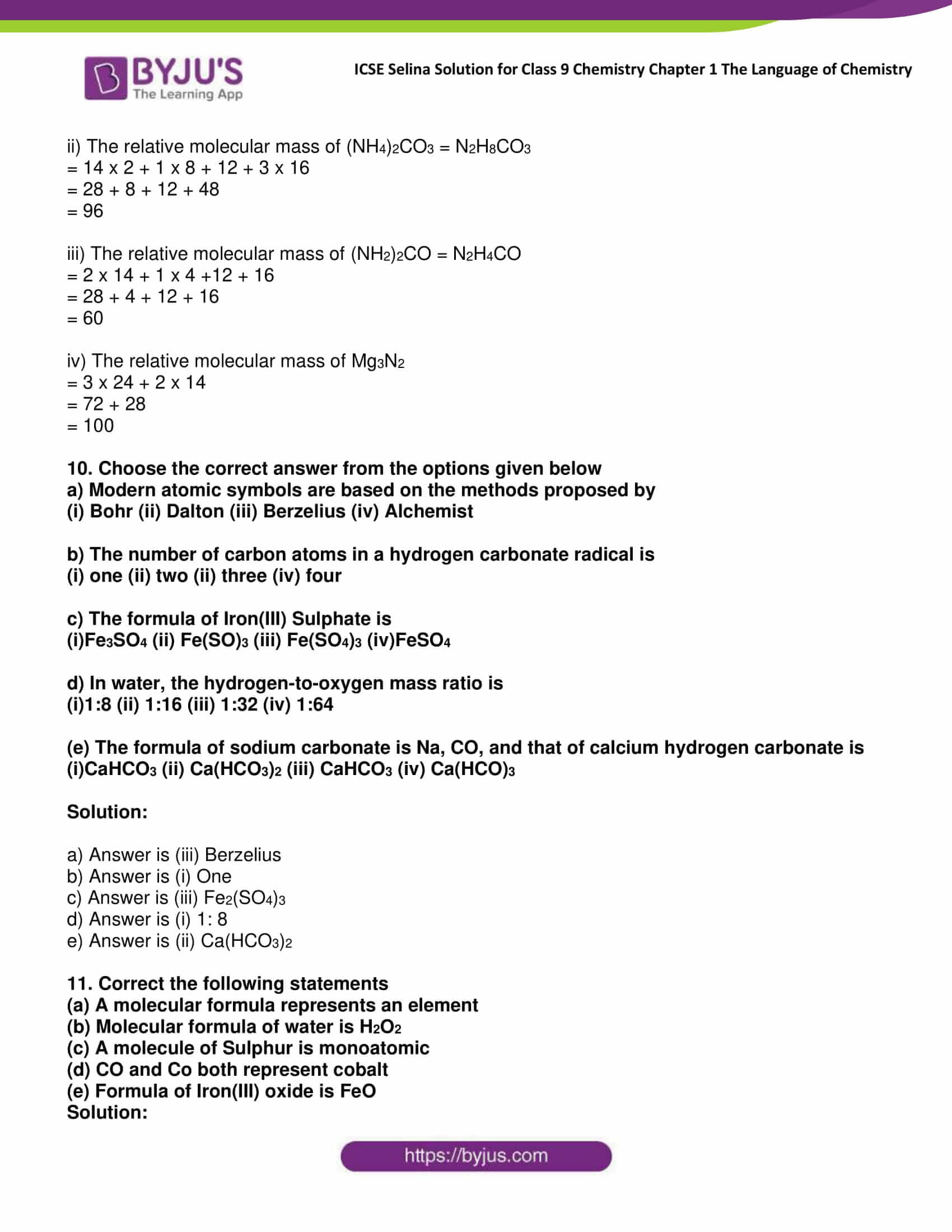 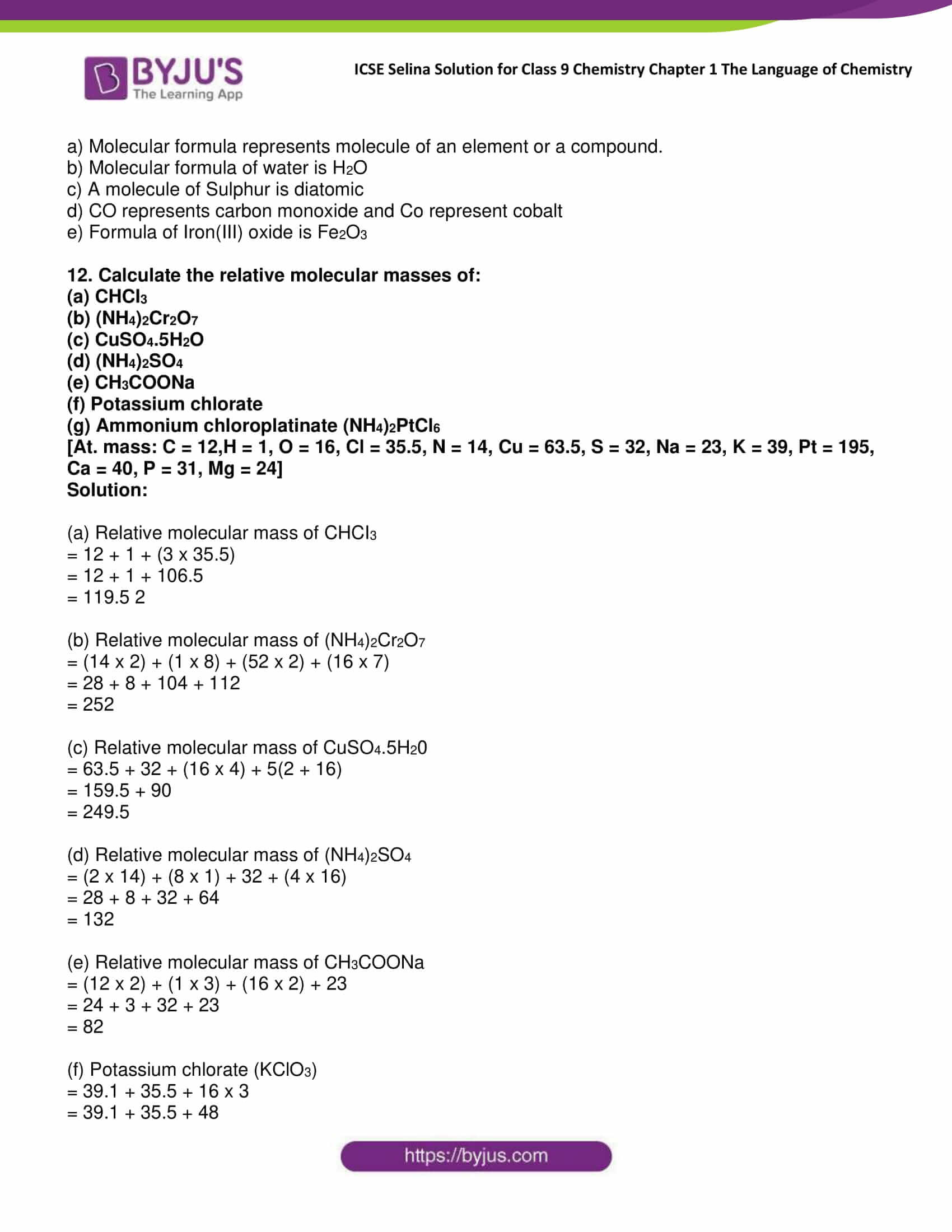 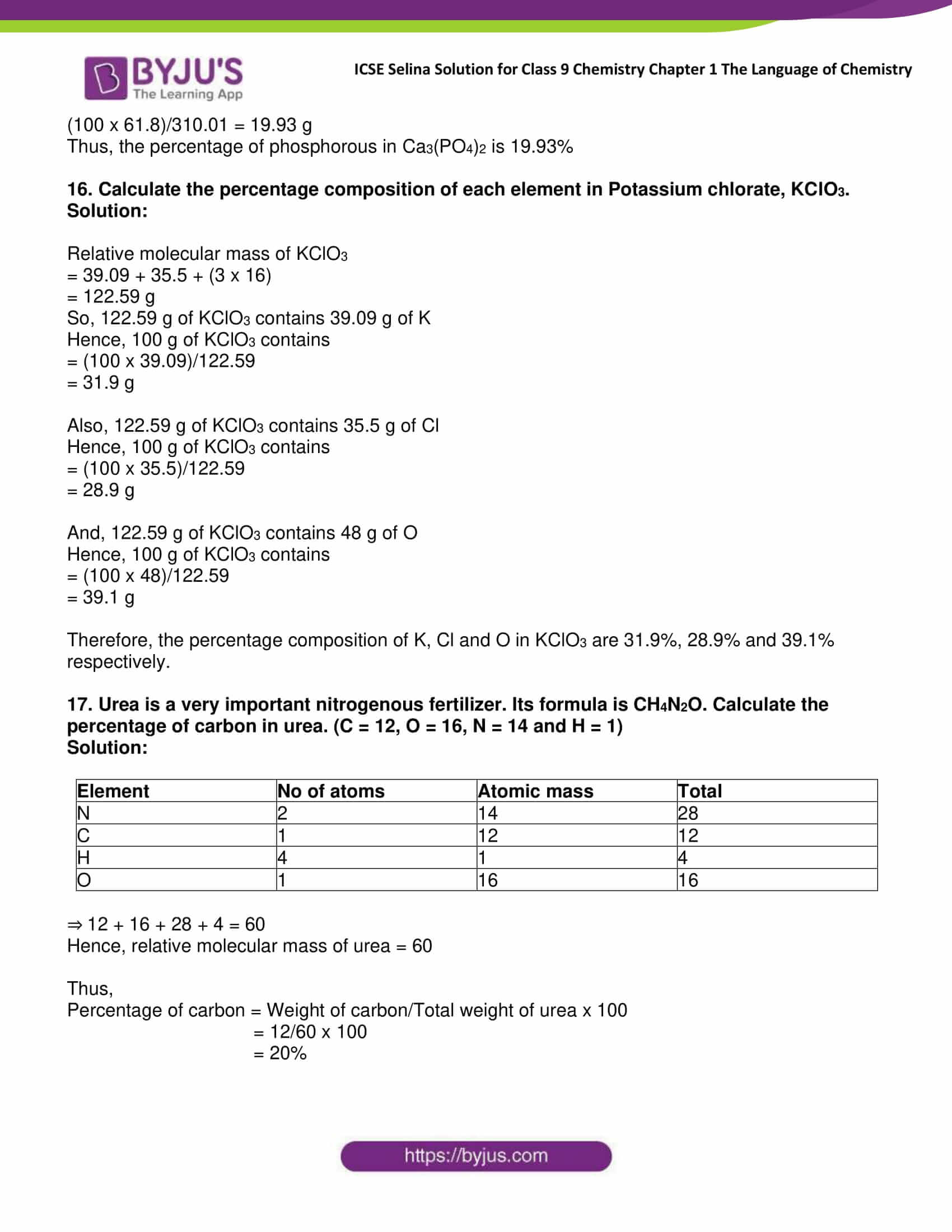 1. What is a symbol? What information does it convey?

Short form of atom of specific element or the abbreviations used to refer names of the element is known as symbol.

1. It represents a specific element.

2. It represents one atom of an element.

3. A symbol represents how many atoms are present in its one gram (gm) atom.

4. It represents the number of times an atom is heavier than one atomic mass unit (amu) taken as a standard.

2. Why is the symbol S for Sulphur, but Na for Sodium and Si for Silicon?

4. If the symbol for cobalt, Co was written as CO. What would be wrong with it?

If we write CO it means it consist of two non-metals namely Carbon and Oxygen and it would represent Carbon- monoxide but not Cobalt.

5. What do the following symbols stand for?

a) H stands for one atom of Hydrogen

b) H2 stands for one molecule of Hydrogen

6. What is meant by atomicity? Name a diatomic element.

b) How are the elements with variable valency named? Explain with an example.

a) Valency is the capacity of an atom to lose, gain or share atoms during a chemical reaction is called its valency. Sometimes atom of an element can lose more electron than they are present which means they lose electron from its penultimate shell. Such an element is said to exhibit variable valency.

b) If an element exhibits two different positive valencies, then

1. For the lower valency, use the suffix -OUS at the end of the name of the metal

2. For the higher valency, use the suffix -IC at the end of the name of the metal.

8. Give the formula and valency of

b) What is the significance of a formula? Give an illustrate.

a) Chemical formula is a symbolic representation of the number of atoms present in a molecule of that substance.

b) Significance of Chemical Formula

a) Acid radical b) Basic radical

a) Negatively charged radical is called as acidic radical.

b) Positively charged radical is called as basic radical.

11. Select the basic radical in the following compounds

12. Write the chemical formulae of sulphates of Aluminium, Ammonium and Zinc.

13. The valency of element A is 3 and that of element B is 2. Write the formula of the compound formed by the combination of A and B.

Formula of compound having valency of elements are 3 and 2 is A2B3.

15. Write the basic and acidic radicals of the following and then write the chemical formulae of these compounds.

17. Give the names of the following compounds

18. Complete the following statements by selecting the correct option.

a) The formula of a compound represents

b) The correct formula of aluminium oxide is

c) The valency of Nitrogen in Nitrogen di oxide (NO2) is

a) The formula of a compound represents a molecule

b) The correct formula of aluminium oxide is Al2O3

19. Give the names of the elements and number of atoms of those elements, present in the following compounds.

Chemical formula of is NaHCO3

Answer is a) Chloride

1. What is a chemical equation? Why it is necessary to balance it.

A chemical equation is a symbolic representation of a chemical reaction. Here we use symbols and formulas of the substance involved in the reaction.

2. State the information conveyed by the following equation.

This chemical equation shows ‘single displacement reaction’, in which a non-metal is displaced by a metal. Here, non-metal is hydrogen which is evolved as gas. It is displaced by the metal zinc. In the given equation – Zn(s) + 2HCl(aq) → ZnCl2(aq) + H2(g), Zinc (Zn) is a reductant metal that displaces hydrogen (H2) from aqueous solution of Hydrochloric acid (HCl).

3. Write the limitation of reaction given in question 2.

HCl will be the limiting reagent in the reaction and Zn will be excess reagent.

4. Write chemical equations for the following equations and balance them.

1. Fill in the blanks

a) Dalton used symbol [O] for oxygen, [H] for hydrogen.

b) Symbol represents gram atom(s) of an element.

c) Symbolic expression for a molecule is called molecular formula.

d) Sodium chloride has two radicals. Sodium is a basic radical, while chloride is an acid radical.

a) Write the equation

b) Check whether it is balanced, if not balance it.

c) Find the weights of reactants and products.

d) State the law that this equation satisfies?

b) It is a balanced equation

d) This equation states law of conservation of mass where mass is neither created nor destroyed.

4. What information does the following chemical equations convey?

b) This equation shows reaction of Magnesium with HCl which gives magnesium chloride and liberated Hydrogen gas.

5. a) What are poly-atomic ions? Give two examples

b) Name the fundamental law involved in every equation

a) A charged ion that consists of two or more covalently bounded atoms are called as polyatomic ions. Eg: CaCO3, MgSO4

b) Fundamental law involved in every equation is “the law of conservation of mass”.

a) Fluorine in CaF2

b) Sulphur in SF6

e) Nitrogen in the following compound

c) Valency of phosphorus in PH3 is +3

e) Valency of nitrogen in the given compounds:

7. Why should an equation be balanced? Explain with the help of simple equation.

An equation should n be balanced to make it comply with the law of conservation of matter which states that matter is neither created nor destroyed in the course if a chemical reaction. An unbalanced equation either deletes or adds extra atoms in the equation.

In this equation number of atoms in left and right side are not equal hence the balanced equation will be written as.

8. Write the balanced chemical equations of the following word equations

b) Calculate the molecular mass of the following

b) i) The relative molecular mass of CuSO4.5H2O

10. Choose the correct answer from the options given below

a) Modern atomic symbols are based on the methods proposed by

c) The formula of Iron(III) Sulphate is

d) In water, the hydrogen-to-oxygen mass ratio is

a) Answer is (iii) Berzelius

(a) A molecular formula represents an element

(b) Molecular formula of water is H2O2

(c) A molecule of Sulphur is monoatomic

a) Molecular formula represents molecule of an element or a compound.

b) Molecular formula of water is H2O

c) A molecule of Sulphur is diatomic

12. Calculate the relative molecular masses of:

(a) Relative molecular mass of CHCI3

13. Give the empirical formula of:

14. Find the percentage mass of water in Epsom salt MgSO4.7H2O.

26 g of Epsom salt contains 126 g of water of crystallisation.

15. Calculate the percentage of phosphorus in:

(a) Relative molecular mass of Ca(H2PO4)

(b) Relative molecular mass of Ca3(PO4)2

16. Calculate the percentage composition of each element in Potassium chlorate, KClO3.

Frequently Asked Questions on The Language of Chemistry

What is a symbol?

Short form of an atom of a specific element or the abbreviations used to refer names of the element is known as symbol.

H stands for one atom of Hydrogen

H2 stands for one molecule of Hydrogen

2H stands for 2 atoms of Hydrogen

2H2 stands for 2 molecules of Hydrogen

What is meant by atomicity?

Valency is the capacity of an atom to lose, gain or share atoms during a chemical reaction is called its valency.

What is a chemical formula?

A chemical formula is a symbolic representation of the number of atoms present in a molecule of that substance.

What is Acid radical?

What is Basic radical?

What are polyatomic ions?