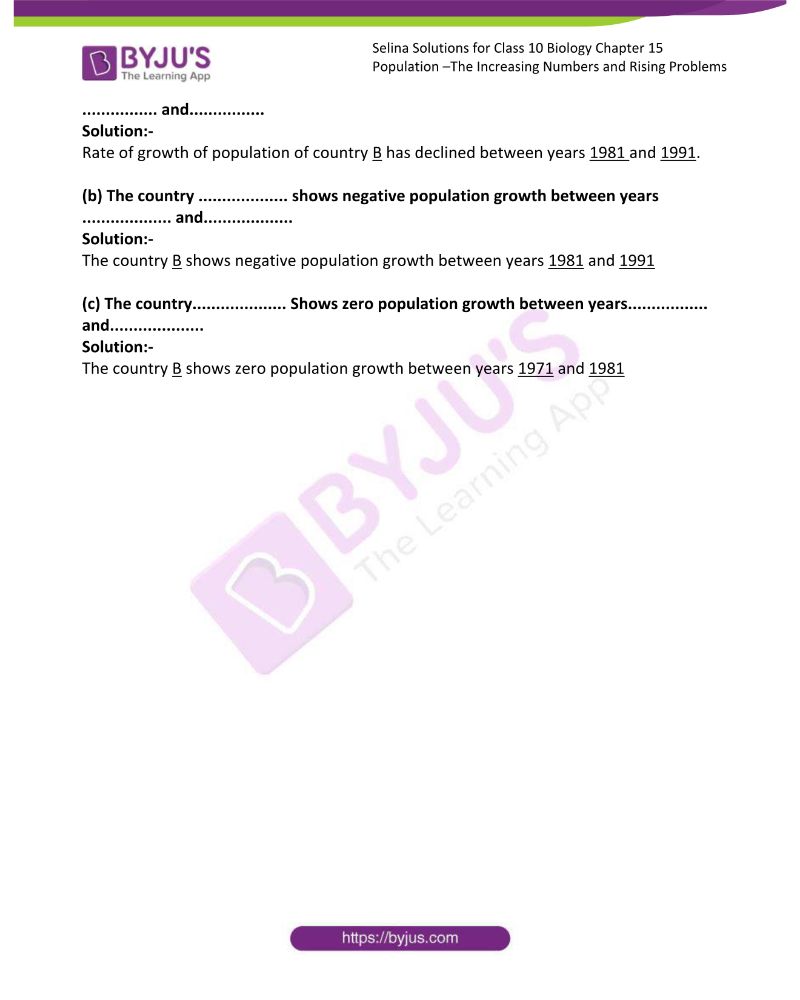 (Select the most appropriate option in each case)

1. What was directly responsible for the rapid rise of world population in the twentieth century?
(a) Increased food production
(b) Better transport facilities
(c) Better education and job prospects
(d) Use of antibiotics and prophylactic vaccinations

(d) Use of antibiotics and prophylactic vaccinations

1. Give the technical term for statistical study of human population of a region.

Demography is the technical term for the statistical study of the human population of a region.

2. What is the total world population at present?

Birth rate or natality is the number of live births per 1000 people of population per year.

Death rate or Mortality is the number of deaths per 1000 population per year.

Population density is the number of individuals per square kilometre at any given time.

(e) Rate of growth of population

4. Mention whether the following statements are true (T) or false (F). Give reason in support of your answer.
(a) Cow was the first domesticated animal.

The dog was the first domesticated animal.

A major phase in the growth of the human population started with the scientific and industrial revolution. Rapidly growing industries made human life more and more comfortable, with greater opportunities for jobs and with more production of food.

(d) Birthrate (natality) to the number of live births per hundred people of population per decade.
Solution:-

Birth rate or natality is the number of live births per 1000 people of population per year.

(e) Tubectomy is a popular surgical method of contraception in human males.

Vasectomy is a popular surgical method of contraception in human males.

5. What is the present rate of growth of population of the world and of our own country?

6. What are the age restrictions for marriage by law for boys and girls in India?

The age restrictions for marriage by law for boys is 21 years and for girls is 18 years.

7. Give two advantages of a small family?

(i) The financial costs of maintaining a household are lower.

8. Mention two reasons for the rapid increase of population in India.

(i) Illiteracy:- Most of the rural population which forms the bulk of our society are still illiterate, ignorant and superstitions. They also do not know the functioning of the human reproductive system.

(iii)Desire to male child:- Most Indians families still hold the view that a male child is essential for keeping up the name of the family.

9. Some great author has said that a population explosion is far more dangerous than an atomic explosion. Justify his statement?

Population explosion is far more dangerous than an atomic explosion because it leads to many significant problems that leave a question mark on the survival of human being. The highest growth in the human population is mortally taxing the Earth and its resources. The fast increase in population results in the increased number of consumers, but very less amount of products that lead to the malnutrition. Each person needs essential resources, and almost all people aspire to utilize significantly more resources than are required by their basic needs. As a result, the Earth is attempting to impose its checks on the human population. 95% of the human population growth is occurring in countries already struggling with poverty, illiteracy and civil unrest.

10. Explain briefly the relationship between poverty and population and how one affects the other.

Most of the rural population which forms the bulk of our society are still illiterate, ignorant and superstitions. They also do not know the functioning of the human reproductive system. Among the people from lower strata of society, children are regarded as a gift of God and a sign of prosperity. Therefore they make no effort to avoid pregnancy. Due to the high infant mortality rate in our country, people from the economically weaker section think it safer to produce more children so that at least some may survive. Poor standard of living and poverty provide no recreation other than sex. Hence, the population keeps on rising and so does poverty. As the population increases the quality of life goes down.

11. List three major landmarks in human history which contributed to the sudden rise in population of the world.

12. What was the approximate Indian population according to the 1981 census? What was it in 1991?

13. Sterilisation in men means preventing the flow of sperms into the seminal vesicles by cutting or ligating the vas deferens. Can there be a corresponding operation made in women? If yes, where?

Yes, there could be a corresponding operation made in women. The name of the operation in women is ‘tubectomy’. In tubectomy, the abdomen is opened and the fallopian tubes (oviducts) are cut or ligated i.e. tied with nylon thread to close the passage of the egg. The inverted red triangle has become a popular sign in India for family welfare. It is prominently displayed at all such offices and hospitals where any help for advice about family planning is available free of cost. (i) Children in small families, especially first and only children, tend to have higher school and personal achievement levels than do children of larger families.

(ii) It is easier for both parents to combine careers with family life.

(iii) The financial costs of maintaining a household are lower.

(iv)The general stress level is lower because there often are fewer conflicts and less rivalry.

1. Our resources cannot keep pace with the rising population. Give three examples in support of this statement.

(i) Food:- One most Important need of humans is food. It is true that humans have been discovering better and better methods to produce more food, but it cannot be in the same proportion as the rise in population. If unchecked the number of people are increasing in geometrical progression.

(ii) Water:- Availability of clean and germ-free water for drinking purpose would be more and more scarce with the increase in population; the reason would be mainly, the pollution of rivers, ponds, lakes, etc.

(iii) Forests:- Forests are in a way, the most important natural resources. They provide us timber, firewood, resins, medicines, wood-pulp (for paper), etc. Forests are the main contributors of life-sustaining oxygen, to the atmosphere.

2. How can the knowledge of processes of reproduction help people in limiting the size of their families? Give two concrete examples.

(ii) The married couples should be educated to delay the birth of their first child, to space the second with a sufficient interval for the proper upbringing and to stop the third. People should be advised to adopt family planning methods by which they can prevent pregnancy. These include devices for both men and women, for example, condoms, intrauterine devices, oral pills.

3. What is the idea behind the phrase “population explosion”?

Population explosion refers to the rapid and a massive rise in the world population that has occurred over the last few hundred years. It began in the middle of the nineteenth century. Two-thirds of the present world population belongs to the developing nations where more than half the people live below the poverty line. The effects of this population increase are evident in the increasing poverty, unemployment, air and water pollution, and shortage of food, health resources and educational resources. Some of the reasons for this population explosion are poverty, better medical facilities, and immigration from the neighbouring countries. The population in India continues to increase at an alarming rate.

1. Given below are hypothetical figures in regard to population (in crores) of two countries A and B during the last three decades.

Rate of growth of population of country B has declined between years 1981 and 1991.

Selina Solutions Concise Biology Class 10 Chapter 15 Population – The Increasing Numbers and Rising Problems offers an overview of topics pertaining to the rising population, the population in India, factors responsible for the population explosion in India. The other topics are problems that occur due to the increase in population and measures taken for the control of the population.