Selina Solutions Concise Biology Class 10 Chapter 3 Genetics – Some Basic Fundamentals, download the pdf given below. If students want to score higher in Biology, it requires the right amount of practice for every topic. Students of Class 10 are suggested to solve Selina Solutions Class 10 to strengthen their fundamentals and be able to answer questions that are usually asked in the examination. 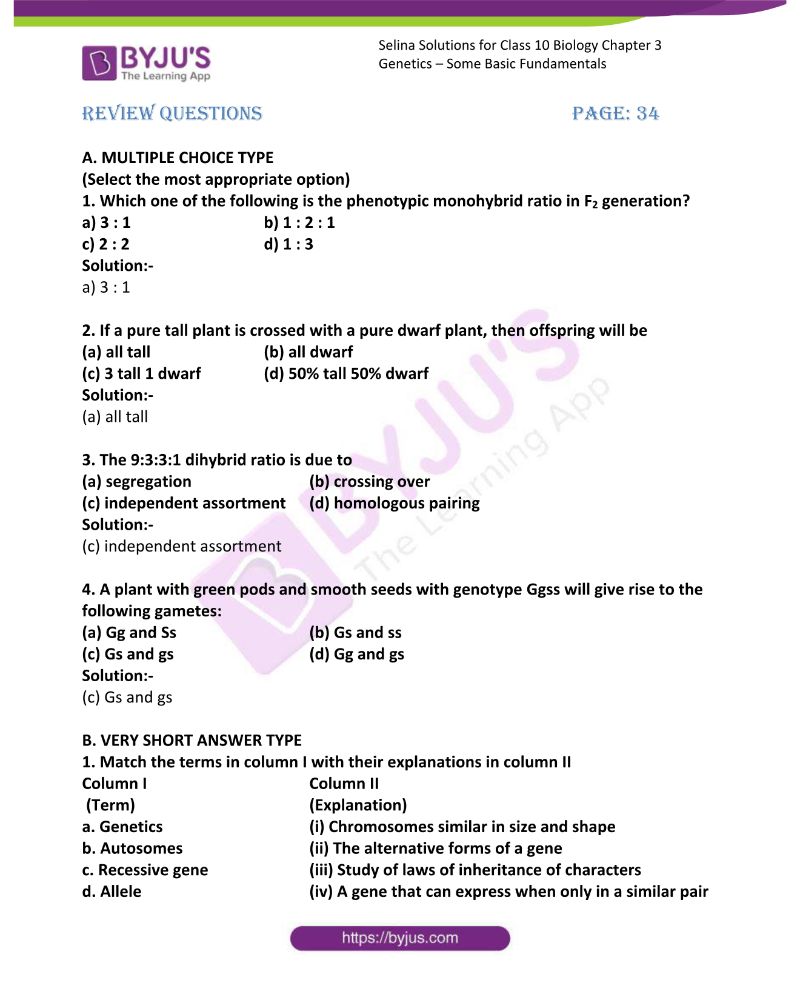 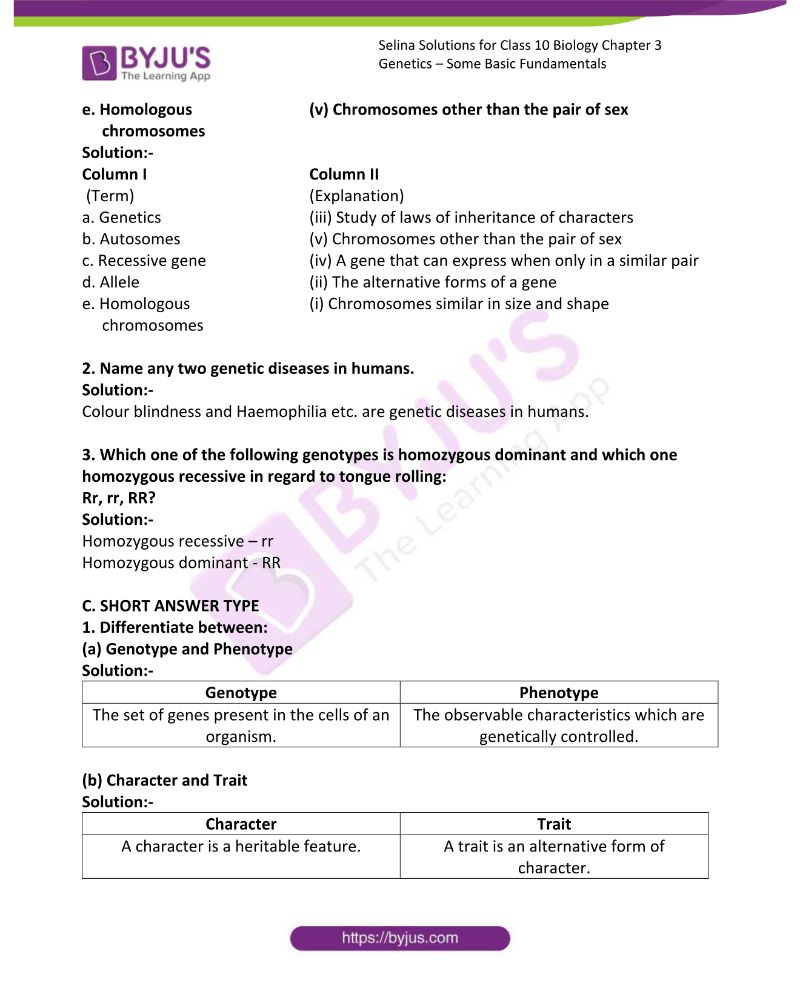 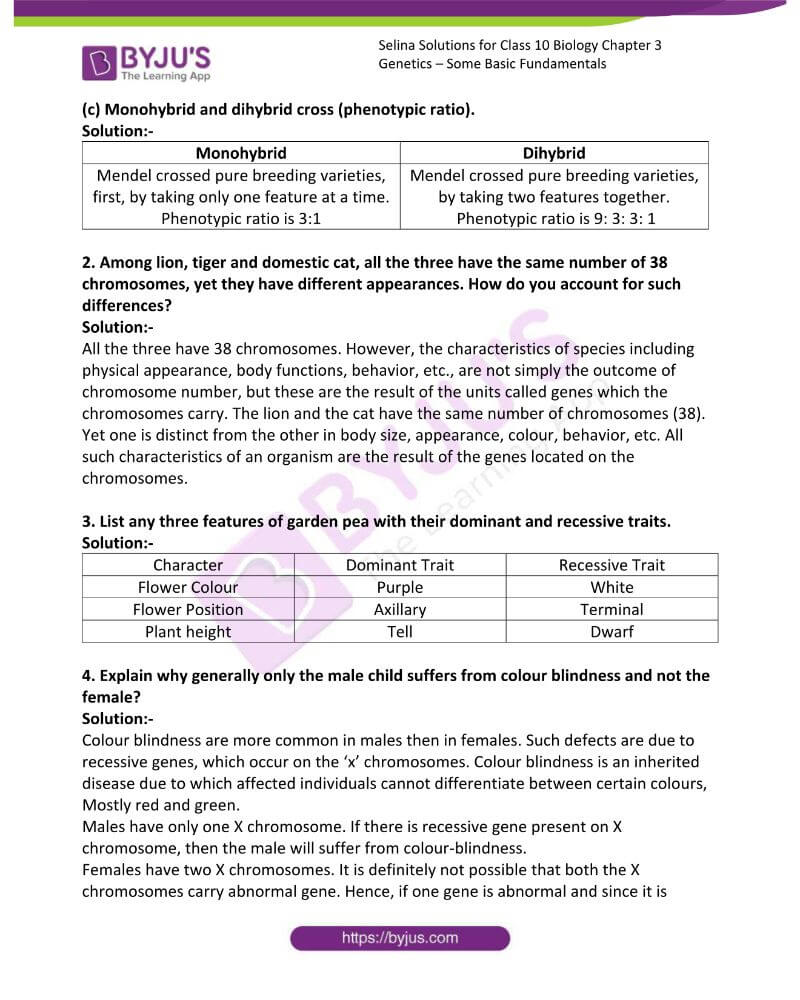 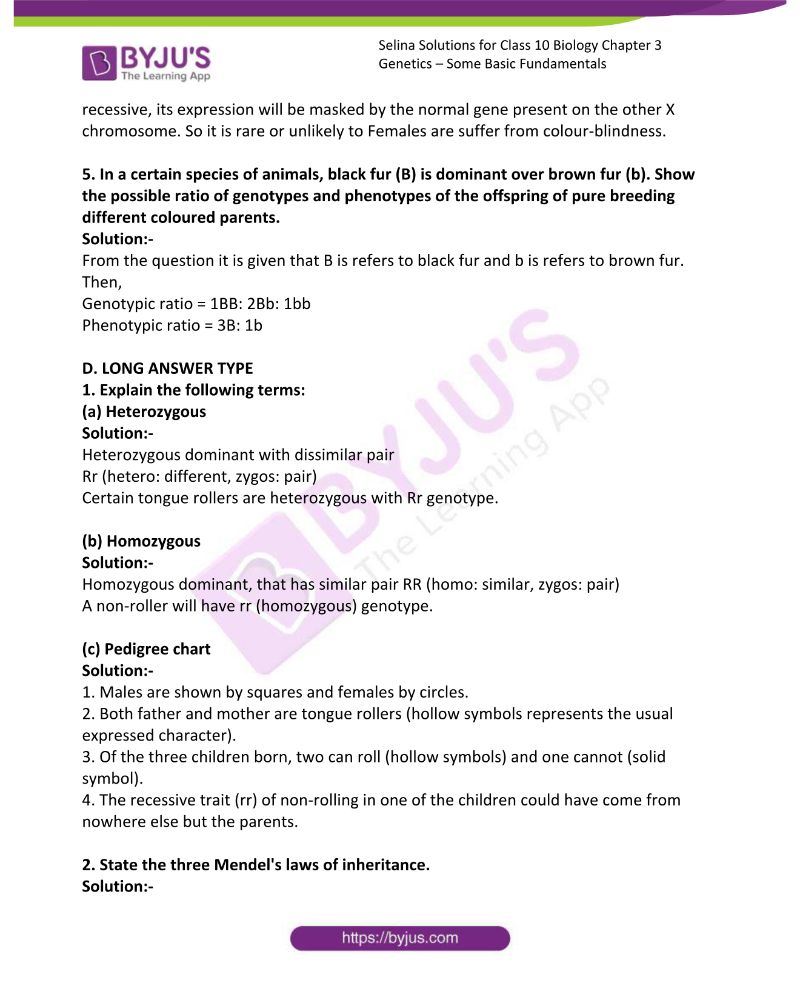 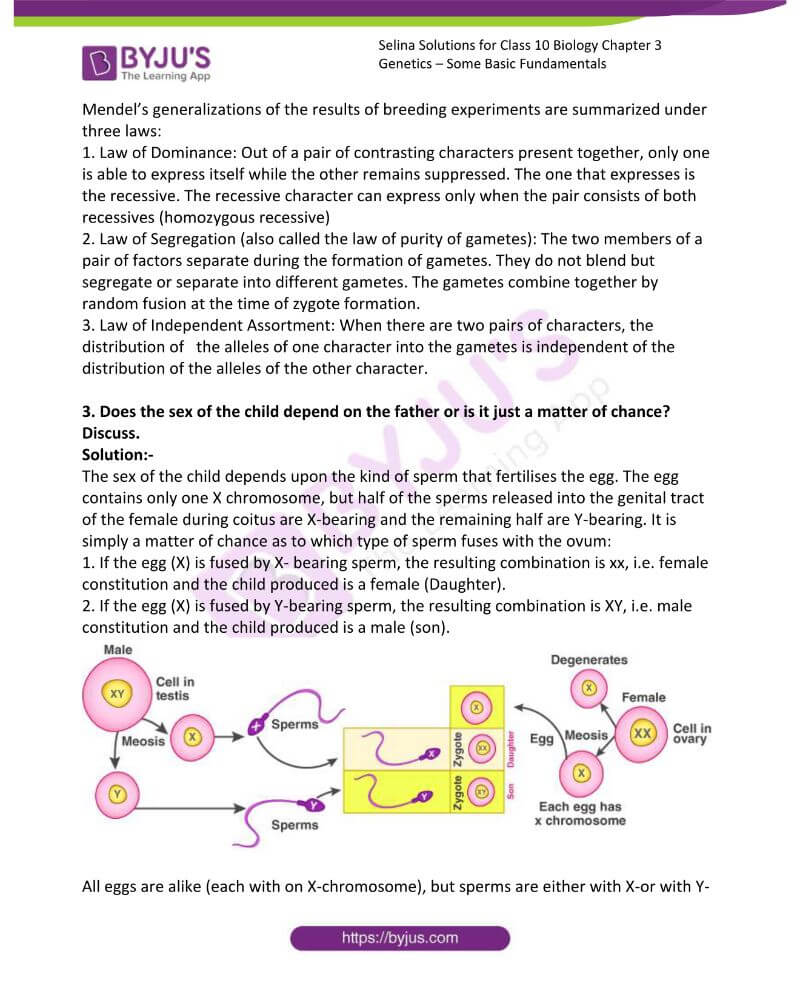 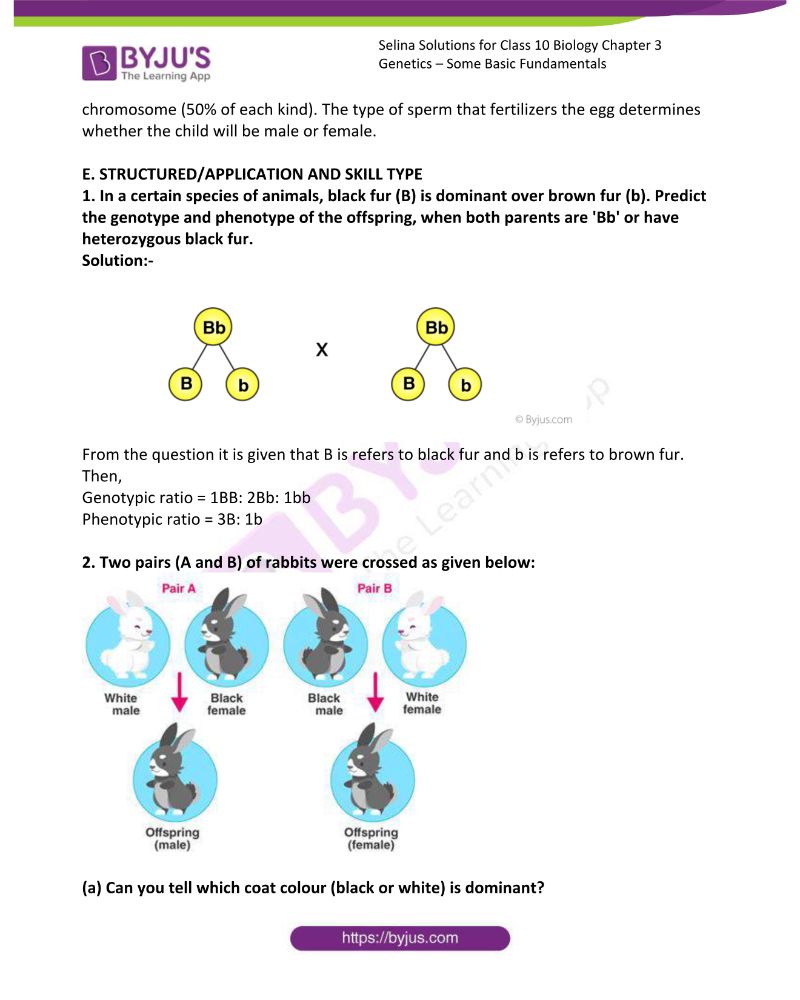 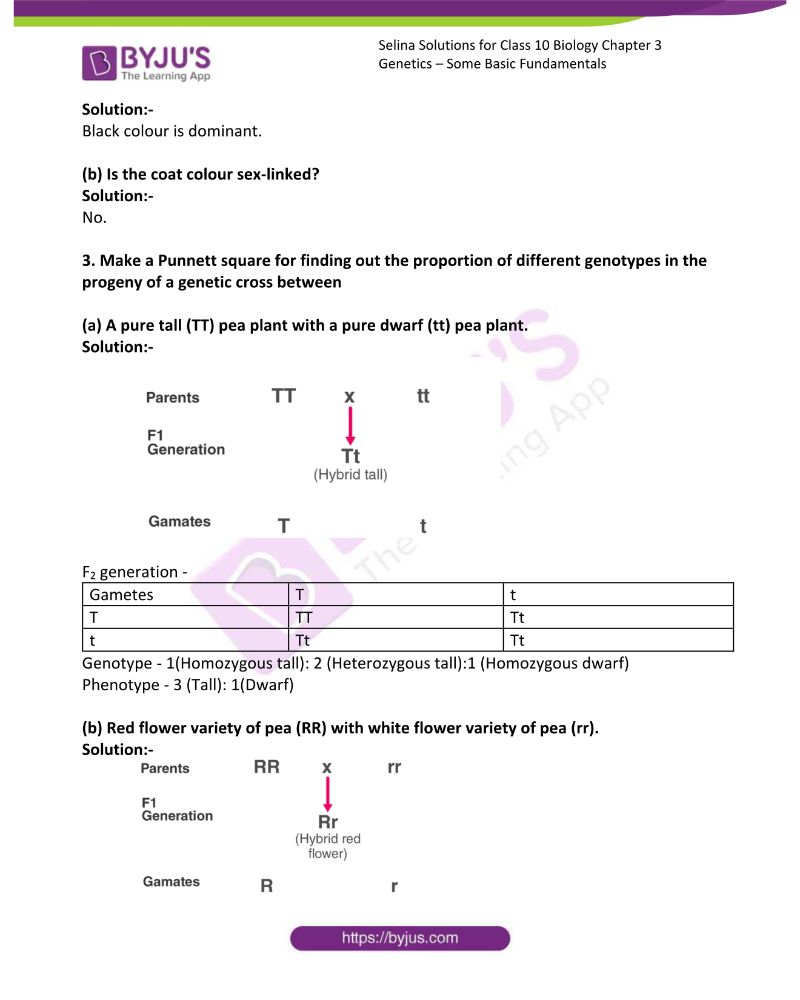 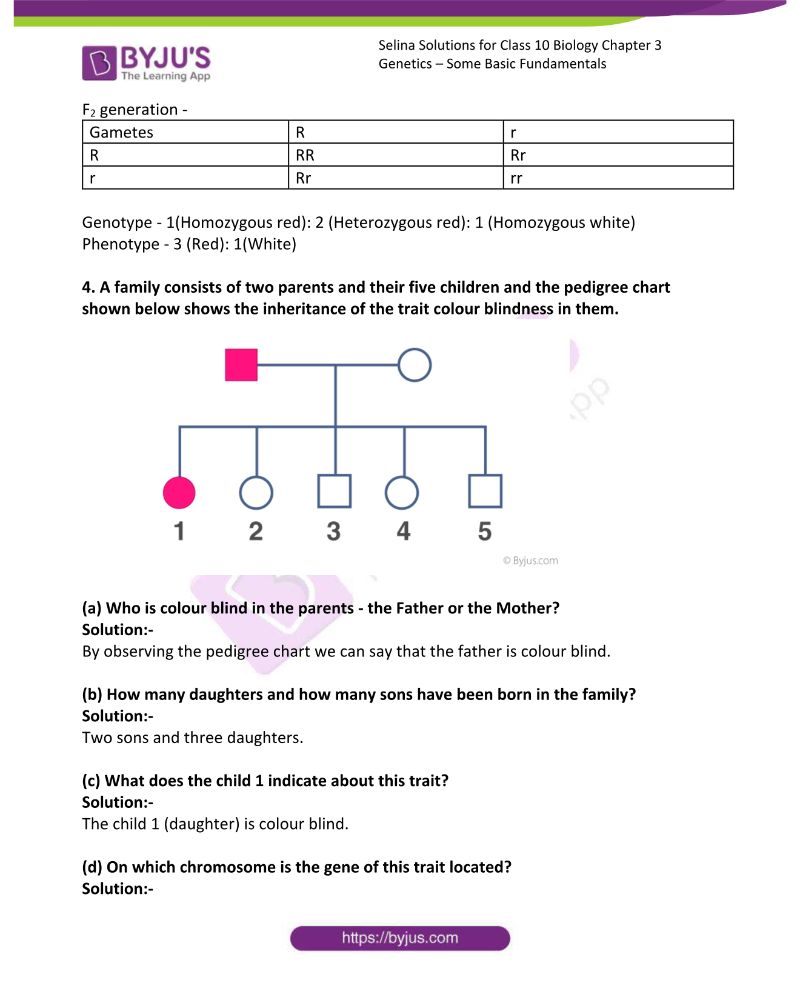 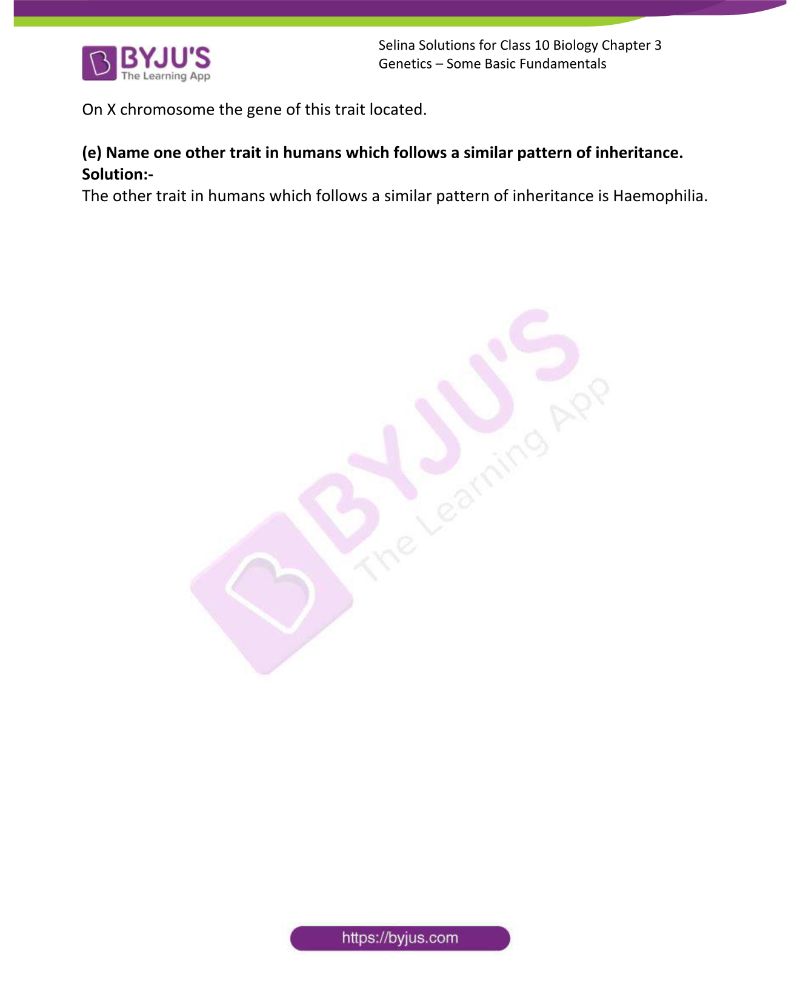 (Select the most appropriate option)

1. Which one of the following is the phenotypic monohybrid ratio in F2 generation?

2. If a pure tall plant is crossed with a pure dwarf plant, then offspring will be

(a) segregation (b) crossing over

4. A plant with green pods and smooth seeds with genotype Ggss will give rise to the following gametes:

a. Genetics (i) Chromosomes similar in size and shape

b. Autosomes (ii) The alternative forms of a gene

d. Allele (iv) A gene that can express when only in a similar pair

e. Homologous (v) Chromosomes other than the pair of sex

a. Genetics (iii) Study of laws of inheritance of characters

b. Autosomes (v) Chromosomes other than the pair of sex

c. Recessive gene (iv) A gene that can express when only in a similar pair

d. Allele (ii) The alternative forms of a gene

e. Homologous (i) Chromosomes similar in size and shape

Colour blindness and Haemophilia etc. are genetic diseases in humans.

3. Which one of the following genotypes is homozygous dominant and which one homozygous recessive in regard to tongue rolling:
Rr, rr, RR?

1. Differentiate between:
(a) Genotype and Phenotype

(b) Character and Trait

2. Among lion, tiger and domestic cat, all the three have the same number of 38 chromosomes, yet they have different appearances. How do you account for such differences?

3. List any three features of garden pea with their dominant and recessive traits.

4. Explain why generally only the male child suffers from colour blindness and not the female?

Colour blindness is more common in males than in females. Such defects are due to recessive genes, which occur on the ‘x’ chromosomes. Colour blindness is an inherited disease due to which affected individuals cannot differentiate between certain colours,

Males have only one X chromosome. If there is a recessive gene present on the X chromosome, then the male will suffer from colour-blindness.

Females have two X chromosomes. It is definitely not possible that both the X chromosomes carry the abnormal gene. Hence, if one gene is abnormal and since it is recessive, its expression will be masked by the normal gene present on the other X chromosome. So it is rare or unlikely to Females are suffering from colour-blindness.

5. In a certain species of animals, black fur (B) is dominant over brown fur (b). Show the possible ratio of genotypes and phenotypes of the offspring of pure breeding different coloured parents.

From the question it is given that B is referred to black fur and b is refers to brown fur.

A non-roller will have rr (homozygous) genotype.

1. Males are shown by squares and females by circles.

3. Of the three children born, two can roll (hollow symbols) and one cannot (solid symbol).

4. The recessive trait (rr) of non-rolling in one of the children could have come from nowhere else but the parents.

Mendel’s generalizations of the results of breeding experiments are summarized under three laws:

1. Law of Dominance: Out of a pair of contrasting characters present together, only one is able to express itself while the other remains suppressed. The one that expresses is recessive. The recessive character can express only when the pair consists of both recessives (homozygous recessive)

2. Law of Segregation (also called the law of purity of gametes): The two members of a pair of factors separate during the formation of gametes. They do not blend but segregate or separate into different gametes. The gametes combine together by random fusion at the time of zygote formation.

3. Does the sex of the child depend on the father or is it just a matter of chance? Discuss.

The sex of the child depends upon the kind of sperm that fertilises the egg. The egg contains only one X chromosome, but half of the sperms released into the genital tract of the female during coitus are X-bearing and the remaining half are Y-bearing. It is simply a matter of chance as to which type of sperm fuses with the ovum:

1. If the egg (X) is fused by X- bearing sperm, the resulting combination is xx, i.e. female constitution and the child produced is a female (Daughter).

2. If the egg (X) is fused by Y-bearing sperm, the resulting combination is XY, i.e. male constitution and the child produced is a male (son).

All eggs are alike (each with on X-chromosome), but sperms are either with X-or with Y-chromosome (50% of each kind). The type of sperm that fertilizes the egg determines whether the child will be male or female.

1. In a certain species of animals, black fur (B) is dominant over brown fur (b). Predict the genotype and phenotype of the offspring, when both parents are ‘Bb’ or have heterozygous black fur.

From the question it is given that B is referred to black fur and b is refers to brown fur.

2. Two pairs (A and B) of rabbits were crossed as given below: 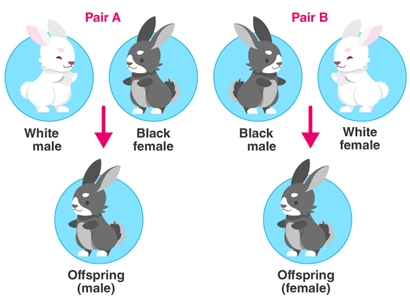 (a) Can you tell which coat colour (black or white) is dominant?
Solution:-

The black colour is dominant.

(b) Is the coat colour sex-linked?

3. Make a Punnett square for finding out the proportion of different genotypes in the progeny of a genetic cross between 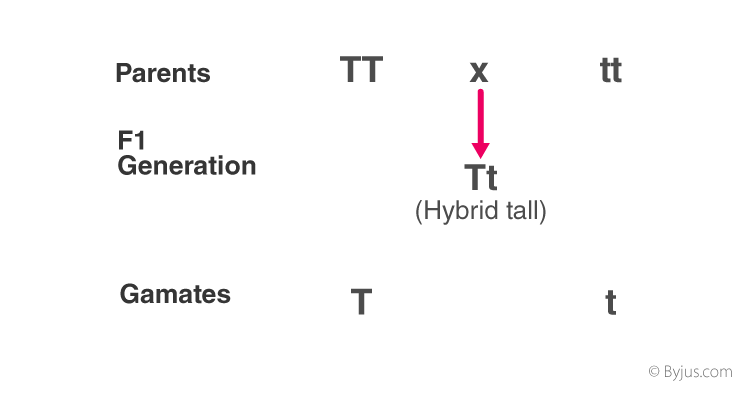 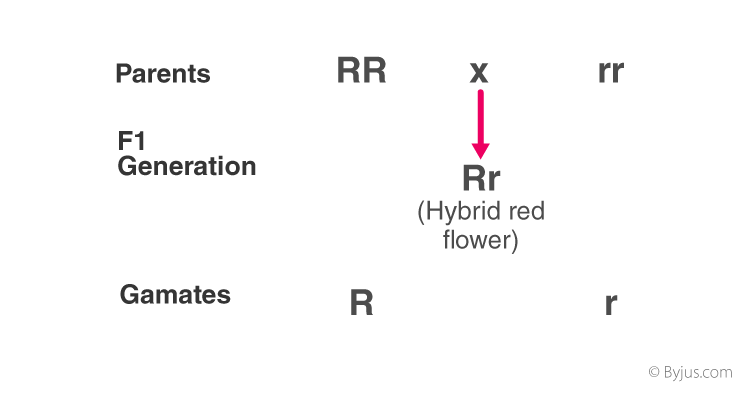 4. A family consists of two parents and their five children and the pedigree chart shown below shows the inheritance of the trait colour blindness in them. 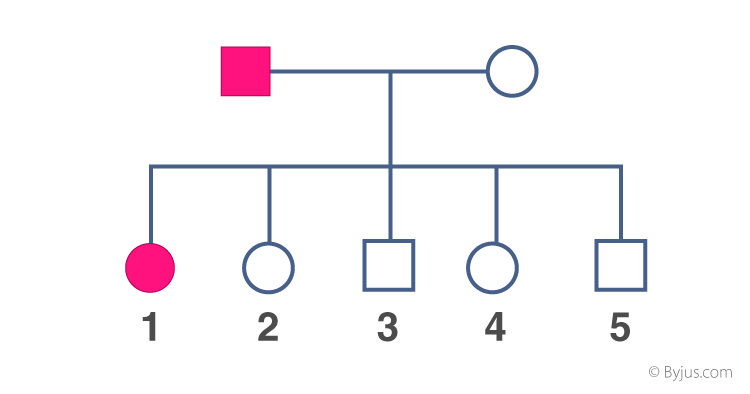 (a) Who is colour blind in the parents – the Father or the Mother?

By observing the pedigree chart we can say that the father is colour blind.

(b) How many daughters and how many sons have been born in the family?

(c) What does the child 1 indicate about this trait?

The child 1 (daughter) is colour blind.

(d) On which chromosome is the gene of this trait located?
Solution:-

On X chromosome the gene of this trait located.

(e) Name one other trait in humans which follows a similar pattern of inheritance.

The other trait in humans which follows a similar pattern of inheritance is Haemophilia.