What is Back Bonding?

The exchange of electrons between an atomic orbital on one atom and an anti bonding orbital on another atom is known as back bonding.

Back bonding is a form of bonding that occurs between atoms in a compound when one atom has a single electron and the other has a vacant orbital next to it. Since pi-bonding occurs after the formation of the sigma bond, a compound with back bonding has pi-bonding characteristics. Back Bonding in BF3

BF3 is a molecule made up of a Boron sp2 hybrid covalently bound to three fluorine atoms. The covalent bond indicates that electrons are exchanged rather than boron losing and fluorine gaining. Boron’s high ionization energy causes this bond to form. Three resonating structures result from the lone pair of electrons between boron and fluorine. Back bonding BF3 has no impact on the molecule’s bond angle, planarity, or geometry.

The BF3 molecule has a ‘Trigonal Planar’ geometry. A model of three atoms around one atom in the centre is known as a ‘Trigonal Planar.’ It’s as if they’re all peripheral atoms in one plane, since the 120° bond angles on each of them make them an equilateral triangle.

Back Bonding in Metal Carbonyls

Any coordination or complex compound containing a heavy metal such as nickel, cobalt, or iron surrounded by carbonyl (CO) groups is known as a metal carbonyl. Tetracarbonylnickel Ni(CO)4, pentacarbonyliron Fe(CO)5, and octacarbonyl dicobalt Co2(CO)8 are some of the most common metal carbonyls. 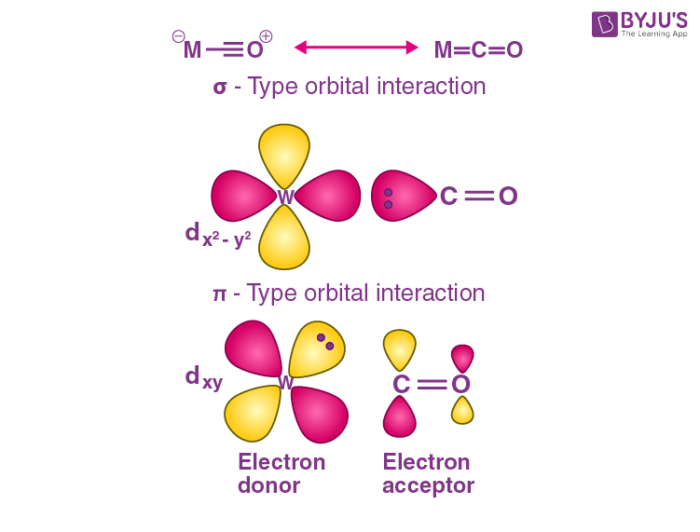 All about Back Bonding

Back bonding, also known as back donation, is a chemistry phenomenon in which electrons pass from one atom’s atomic orbital to an -acceptor ligand’s sufficient symmetry anti bonding orbital. The metal’s electrons are used to bind to the ligand, relieving the metal of excess negative charge in the process.

Is there back bonding in CCl2?

CCl2 is a well-known carbene in which carbon has a lone pair that can be donated to cl. Since cl has vacant d orbitals, c can easily form a pi dative bond (back bonding) with cl as 2p-3d backbonding.

Does back bonding affect bond length?

Back bonding BF3 has no impact on the molecule’s bond angle, planarity, or geometry. Notice that, as a result of back bonding, the hybridisation shifts, bond strength improves, and bond length decreases.

Why does BBr3 show least back bonding?

The size of orbitals increases when we switch from fluorine to chlorine, so there isn’t any efficient back bonding. Similarly, due to much larger changes in the size of overlapping orbitals, BBr3 would have less back bonding.

What is back bonding explained with example?

Bonding occurs between atoms in a compound when one atom has a lone pair of electrons and the other has a vacant orbital next to it. Since pi-bonding occurs after the formation of a sigma bond, a compound with back bonding has pi-bonding characteristics.

Because of its backbonding, trisilylamine has a planar geometry. The d-orbitals in silicon are empty. The empty d-orbital of silicon is supplied with electrons by the lone pair on the Nitrogen atom. Planar geometry is acquired by molecules with sp2 and sp hybridization.

What is synergic bonding?