Binding energy is necessary to split subatomic particles in atomic nuclei or the nucleus of an atom into its components namely: neutrons and protons or collectively known as the nucleons. The binding energy of nuclei is a positive value because every nuclei need net energy to isolate them into every neutron and proton. Binding energy is also applicable to atoms and ions bound together in crystals.

Binding energy is of several types and each operates over a different distance and energy scale. A thing to note here is that if the size of a bound system is small then its associated binding energy will be higher. In any case, we will look at the types in brief below.

Nuclear binding energy is basically the energy required to dismantle a nucleus into free unbound neutrons and protons. It is the energy equivalent of the mass defect, the difference between the mass number of a nucleus and its measured mass. Nuclear binding energy is derived from the residual strong force or nuclear force which again is mediated by 3 types of mesons.

Nuclear binding energy can be determined once the mass defect is calculated, usually by converting mass to energy by applying E=mc2. When this energy is calculated which is of joules for a nucleus, you can scale it into per-mole quantities and per-nucleon. You need to multiply by Avogadro’s number to convert into joules/mole and divide by the number of nucleons to convert to joules per nucleon. 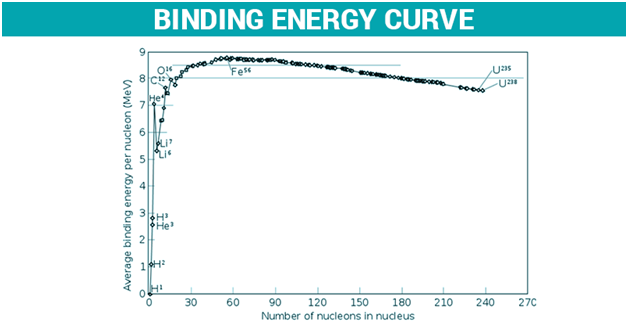 The nuclear binding energy holds a significant difference between the nucleus actual mass and its expected mass depending on the sum of the masses of isolated components.

Since energy and mass are related based on the following equation:

Where c is the speed of light. In nuclei, the binding energy is so high that it holds a considerable amount of mass.

The actual mass is less than the sum of individual masses of the constituent neutrons and protons in every situation because energy is ejected when the nucleus is created. This energy consists of mass which is ejected from the total mass of the original components and called a mass defect. This mass is missing in the final nucleus and describes the energy liberated when the nucleus is made.

Mass defect is determined as the difference between the atomic mass observed (Mo) and expected by the combined masses of its protons (mp, every proton has a mass of 1.00728 AMU) and neutrons (mn, 1.00867 AMU).

We are talking about bond energy and bond-dissociation energy, they are basically measures of the binding energy between the atoms in a chemical bond. Bond energy is the energy that is used to disassemble a molecule into its constituent atoms. It appears in the form of chemical energy released during chemical explosions, burning of chemical fuel and other processes.

What are the different types of binding energy?

How are energy and mass related?

E = mc2 is the relation between mass and energy.

Is binding energy a positive or a negative value?

Binding energy is a positive value.

What is binding energy?

The amount of energy required to break up the nucleus into its constituent particles is called its binding energy.

What is specific binding energy?

For what value of mass number does the binding energy curve attain the maximum value?

The binding energy curve attains a maximum value corresponding to mass number, A = 56.

On what factors does the stability of the nucleus depend?

The stability of the nucleus depends on the relative number of protons and neutrons that it contains.