The hydrogen atom played a special role in the history of physics by providing the key that unlocked the new mechanics that replaced Newtonian mechanics. It started with Johann Balmer’s discovery in 1884 of a mathematical formula for the wavelengths of some spectral lines emitted by hydrogen.

With Rutherford’s discovery of the atomic nucleus, it became clear that atoms consisted of a positively charged nucleus surrounded by negatively charged electrons that were held to the nucleus by an electric force. The simplest atom would be hydrogen consisting of one proton and one electron held together by a Coulomb force of magnitude.

Figure 1. The side view of circular motion is an up and down oscillations 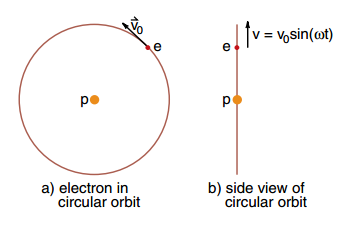 the hydrogen atom is such a simple system, with known masses and known forces, that it should be a straightforward matter to make detailed predictions about the nature of the atom. We could use the orbit program, replacing the gravitational force GMm/r2 by e2/r2. We would predict that the electron moved in an elliptical orbit about the proton, obeying all of Kepler’s laws for orbital motion.

There is one important point we would have to take into account in our analysis of the hydrogen atom that we did not have to worry about in our study of satellite motion. The electron is a charged particle and accelerated charged particles radiate electromagnetic waves. Suppose, for example, that the electron was in a circular orbit moving at an angular velocity ? As shown in Figure (1a). If we were looking at the orbit from the side, as shown in Figure (1b), we would see an electron oscillating up and down with a velocity given by v=v0sin ?t.

If electrons oscillated up and down at a frequency, they produced radio waves of the same frequency. Thus, it is a prediction of Maxwell’s equations that the electron in the hydrogen atom should emit electromagnetic radiation, and the frequency of the radiation should be the frequency at which the electron orbits the proton.

For an electron in a circular orbit, predicting the motion is quite easy. If an electron is in an orbit of radius r, moving at a speed v, then its acceleration an is directed toward the centre of the circle and has a magnitude

One factor of r cancels, and we can immediately solve for the electron’s speed v to get v2 = e2/mr, or

The period of the electron’s orbit should be the distance 2?r travelled, divided by the speed v, or 2?r/v seconds per cycle, and the frequency should be the inverse of that, or v/2?r cycles per second. Using Equation 4 for v, we get

According to Maxwell’s theory, this should also be the frequency of the radiation emitted by the electron.

Test your Knowledge on Bohrs Theory Of Hydrogen Atoms
Q5