Citrate testing is used to determine the ability of the bacteria to use sodium citrate as the only source of carbon and inorganic ammonium hydrogen phosphate (NH4H2PO4) as a source of nitrogen. The citrate utilization test is possible only if the organisms are capable of fermenting citrate. The process takes place via the enzymes is called citrase.

Citrate test is conducted in the medium of simmon citrate agar and the mixture is prepared using the following ingredients.

To use citrate, proteins such as permeases, need to be transported by citrate. Upon cell absorption of citrate, it is cleaved into oxaloacetate and acetate by the citrate lyase. Oxaloacetate is further metabolized to carbon dioxide and pyruvate. 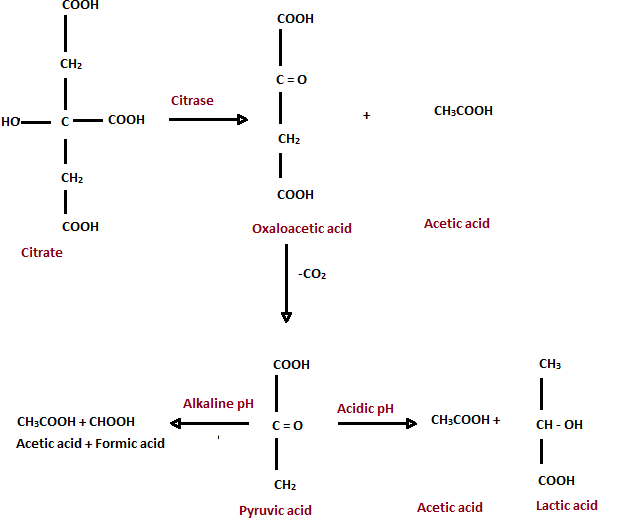 After the formation of pyruvic acid metabolic degradation depends on the pH of the solution.

1. Under basic conditions, acetate and formate are formed during the metabolism of pyruvate.

2. Under acidic conditions, (pH is below 7) lactate is formed.

Growth on the medium indicates the change in the colour of the reagent from green to blue.

Very less or no growth in the medium and colour of the solution remains the same.

2. Apart from Typhi and Paratyphi A, Salmonella

These bacteria give different results in different strains.

Use of Citrate Test