Conic sections (simple conic) are those curves that are created by the intersection of a plane with the surface of a cone. The conic sections possess distinguishing characteristics that give rise to many alternative definitions. A cone consists of two similar parts named nappes of the cone. A conic is usually drawn on a coordinate plane. The types of conic sections involve a hyperbola, parabola, ellipse and circle (called a special type of ellipse). Hyperbola is formed when the plane is parallel to the y-axis. Parabola can be obtained when the plane is seen parallel to the generating line. The formation of a circle involves the plane being perpendicular to the revolution axis.

Ellipse can be found when the plane cuts one of the nappes of the cone at a right angle. A degenerate conic is a plane curve of degree 2 defined by a polynomial equation of the same degree that cannot be an irreducible curve. If the plane cuts the vertex of the cone, then a degenerate conic is obtained. It can be a single line, two lines that may or may not be parallel, a single point or a null set. They occur in the family of geometric objects with a common property of conics. For example, a conic section represented by an equation x2 – y2 = 0 can be called a degenerate as it is reduced to (x – y) (x + y) = 0 and has close proximity to the 2 intersecting lines forming at “X”.

The determinant of the matrix is greater than 0 (positive), zero or less than 0 (negative) and the respective conic is an ellipse, a parabola, or a hyperbola. A conic can be a degenerate conic when the determinant value reduces to 0. The property of degeneracy takes place when the cone of the apex exists in the plane or during the process of the cone being degenerated to a cylinder also when the plane is seen parallel to the cylinder axis.

The above table explains the nature of degenerate conics when the value of the determinant (Δ = 0) is 0.

The above table explains the nature of the non-degenerate conic when the value of the determinant (Δ ≠ 0) is not equal to 0. 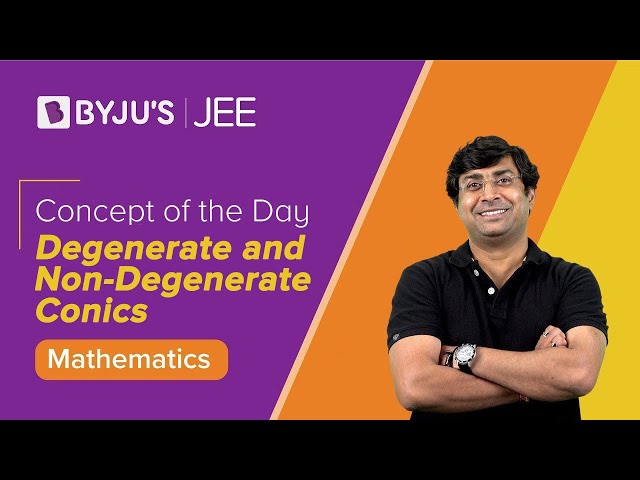 What do you mean by a conic section?

Conic sections are curves obtained by the intersection of a plane with the surface of a cone.

Name the conic whose eccentricity is greater than 1.

Hyperbola has eccentricity greater than 1.

What do you mean by a degenerate conic?

When the plane intersects the vertex of the double cone, the resulting conic is a degenerate conic. Degenerate conics can be a point, a line, or two intersecting lines.

What do you mean by a non degenerate conic?

When the plane does not pass through the vertex of the double cone, the resulting conic is a non degenerate conic.