Dielectric Strength: It is the minimum field intensity that should be applied to break down the insulating property of insulator.

The maximum charge a sphere can hold depends on the size and dielectric strength of the medium in which the sphere is placed.

The charge per unit area of a conductor is defined as surface charge density. = . When A=1 m2 then = q.

Its unit is coulomb/ meter and its dimensions are ATL–2. It is used in the formula for the charged disc, charged conductor and an infinite sheet of charge etc.  Surface Charge Density depends on the shape of the conductor and presence of other conductors and insulators in the vicinity of the conductor.

The number of electric lines of force crossing a surface normal to the area gives electric flux .

Electric flux through an elementary area ds is defined as the scalar product of area and field.

The electric potential at a point in a field is the amount of work done in bringing a unit +ve charge from infinity to the point. It is equal to the Electric potential energy of unit + ve charge at that point.

A surface on which all points are at the same potential.

In the case of a Hollow Charged Sphere.

The resultant electric field intensity obey the principle of superposition.

In the Case of Solid Charged Sphere

It is an equipotential surface. Outside the sphere, the potential varies inversely as the distance of the point from the centre.

Note: Inside a non-conducting charged sphere electric field is present.

Electric intensity inside the sphere

Here, d is the distance from the centre of the sphere and Ed inside and the sphere but falls of like 1/d2 outside the sphere.

This is the unit of energy in particle physics and is represented as eV.

A charged particle of mass m carrying a charge q and falling through a potential V acquires a speed of .

Two equal and opposite charges separated by a constant distance is called electric dipole.

It is the product of one of the charges and distance between the charges. It is a vector directed from negative charge towards the positive charge along the line joining the two charges.

, where is the angle between .

⇒ For a short dipole i.e., if l2 << d2, then the electric intensity on equatorial line is given by

⇒ The potential due to an electric dipole on the axial line is V = and at any point on the equatorial line it is zero.

Due to two Similar Charges

If charges q1 and q2 are separated by a distance ‘r’, null point ( where resulting field intensity is zero) is formed on the line joining those two charges.

If x is distance of null point from q1,

Due to two Dissimilar Charges

In the above formulae is numerical ratio of charges

(for point 1, with in the charges)

(for point 2,out side the charges), Here q2 is numerical value of strong charge

Due to two similar charges zero potential point is not formed.

The line of force is the path along which a unit +ve charge, accelerates in the electric field. The tangent at any point to the line of force gives the direction of the field at that point.

Properties of Electric Lines of Force

The number of lines of force passing normally through a unit area around a point is numerically equal to E.

In a uniform field, lines of force are parallel to one another. 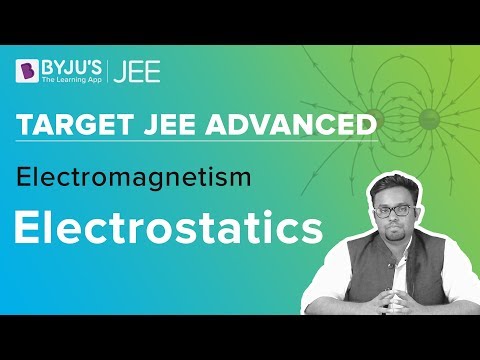 Test your Knowledge on electrostatics
Q5