Hydrogen shows dual behaviour as it resembles in properties with both alkali metals as well as halogens. In monoatomic form, hydrogen is the most abundant element. The study of hydrogen has always been significant due to its properties.

For JEE, the frequently asked questions on hydrogen are as follows:

Question 1: What is the position of hydrogen in the periodic table?

Answer: The placement of elements in the periodic table is based on their electronic configuration. Hydrogen is the first element of the periodic table as its atomic number is one, which means it has only one electron in its atom. This structure is similar to that of alkali metals (ns1) which have 1 electron in their outermost shell. Hydrogen can attain the noble gas configuration of helium, by accepting one electron. This character is very much similar to that of halogens (ns2 np5) which are also short of one electron to complete the octet of electrons in their outermost shells.

Hydrogen shows a lot of resemblance to halogens and alkali metals, yet it is very different from both. So a great thought was given for the position of hydrogen in the periodic table. When hydrogen loses an electron, the size of its nucleus decreases and becomes almost 1.5 × 10-3pm, which is very small as compared to the atomic sizes of normal metals and hence hydrogen ion does not exist freely in nature. This unique behaviour of the hydrogen atom is the reason for hydrogen being placed separately in the periodic table. 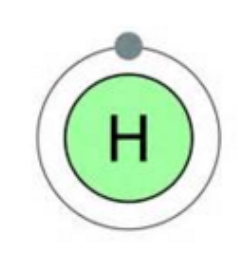 Question 2: What are the physical properties of hydrogen?

Answer: Hydrogen gas is colourless, odourless and tasteless in nature. It is a combustible gas but not a supporter of combustion. It is lighter than air and insoluble in water. It has an atomic mass of 1.008 AMU and an ionization enthalpy of 1312 kJ mol-1

Question 3: What are the chemical properties of hydrogen?

Answer: Chemical properties are largely determined by the bond disassociation enthalpy. Hydrogen molecule forms H-H bond and this single bond has the highest bond enthalpy between two atoms of an element. Hydrogen is inert at room temperature due to its high bond enthalpy and therefore it is prepared at very high temperatures in an electric arc or under ultraviolet radiations. Hydrogen has an electronic configuration of 1s1, and so it can react either by losing an electron and forming an H+ ion, or gaining an electron and forming an H– ion. Hydrogen shares electrons with other elements to form a covalent bond.

For more information on this topic or JEE install BYJU’S – The Learning App.