Quantum numbers are actually a set of four numbers which helps in determining the complete information about the location of electrons in an atom. This is a very fundamental topic as the entire chemistry lies on the basis of electrons and their participation in a reaction. JEE gives high weight to this topic. Questions asked in this topic are easy and less time-consuming.

Question 1: What are the important topics in quantum numbers that need to be focused in order to crack JEE?

Answer: According to JEE syllabus the significant topics in quantum numbers are:

Question 2: How to determine the four set of quantum numbers?

Answer: In order to find the four set of quantum numbers we need to follow these steps: 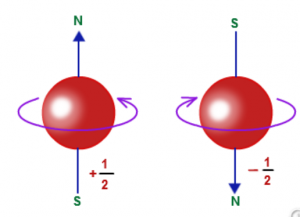 Illustration 1:  What is the correct set of four quantum numbers for the valence electron of rubidium (Z = 37)?

Spin quantum number, s = + ½ or – ½ (there is only one electron which can have a clockwise or anticlockwise spin)

Question 3: Which books should be referred for quantum numbers while preparing for JEE?

Answer: Go through NCERT chemistry textbook for class 11th, this book contains all the details in a very precise way. NCERT is the most student-friendly book as it covers all the topics that are significant from the examination point of view. Practice questions by solving previous year’s JEE papers.

For more details on JEE or this topic install BYJU’S – the learning app.