Fructose is a simple ketonic monosaccharide present in many plants, it is also known as fruit sugar. In plants, it is often bonded to glucose to form the disaccharide sucrose. It is absorbed directly in the bloodstream during the digestion.

Some of the key characteristics of fructose are; when it is pure and dried it is white in colour, it is odourless, tastes sweet, and has a crystalline form. It is the most water-soluble among all the different types of sugars. The fructose sugar is usually found naturally in fruits, flowers, trees, honey, berries and in rooted vegetables.

As for the chemical properties, fructose is a monosaccharide and also a reducing sugar. The older name of fructose was levulose as it rotated the plane-polarized light in the left direction. This was the sole reason that it was classified as a laevorotatory compound. Whereas, glucose rotates the plane-polarized light in the right direction and is thus categorized as a dextrorotatory compound. 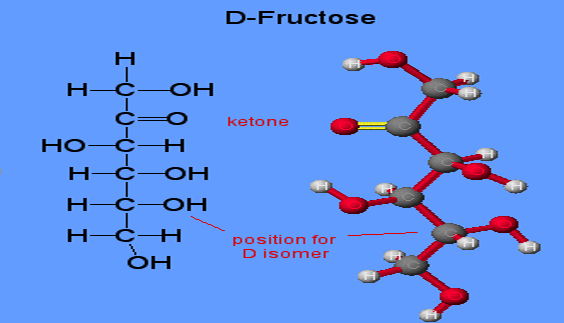 An interesting fact: bees collect nectar from the flowers which consist of sucrose. Then they use an enzyme to hydrolyze or break apart the sucrose into its component parts of the glucose and fructose.

Fructose has a cyclic or chair-like structure. The chair form of fructose is similar to that of glucose but in the structure of fructose, there are few exceptions. Fructose has a ketone functional group and the ring closure occurs from 2nd carbon position. This result in the rise to 5-membered ring or there is a formation of intramolecular hemiacetal in fructose. The OH at 5th carbon combines with carbon in the 2nd position.

The five-membered ring has four carbons and one oxygen. There is basically a formation of chiral carbon and two arrangements of CH2OH and OH group. In essence, fructose displays stereoisomerism. 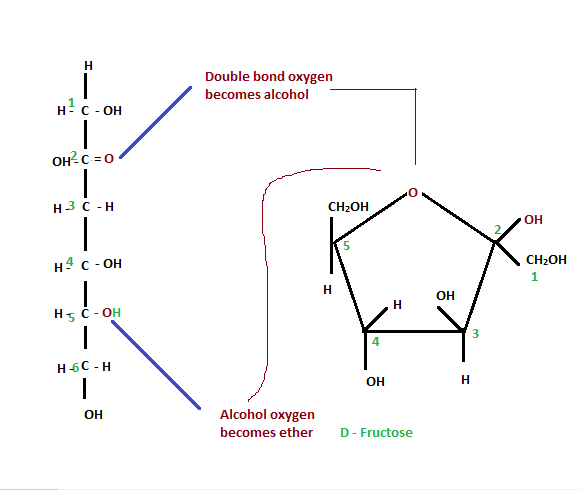 The carbon which is the centre of hemiketal functional group is referred to as anomeric carbon. Hemiketal group has both an ether oxygen and an alcohol group which is attached to two other carbons.

Comparison Of Alpha And Beta Structure Of Fructose 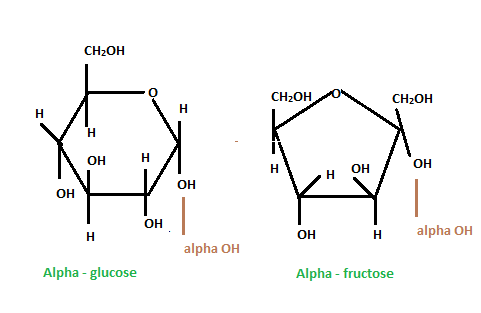 Compare Glucose And Fructose In The Chair Structures

The fructose is identified as a five-membered ring having six-carbon, a hexose whereas glucose is a six-membered ring with –OH group on the carbon at 4th position in a down projection.

Molecular and Structure Formula Of Fructose

Fructose is a levorotatory monosaccharide which means it rotates the plane-polarized light in the left direction. The chemical composition of fructose is C6H12O6 but shows different bonding from glucose. Fructose is a hexose however it exists as a 5-member hemiketal ring. The hemiketal ring helps for a long metabolic pathway and high reactivity in comparison to glucose.

The configuration of D-Fructose is similar in its penultimate carbon as D-glyceraldehyde. Due to the stereometric structure, fructose is much sweeter than glucose. 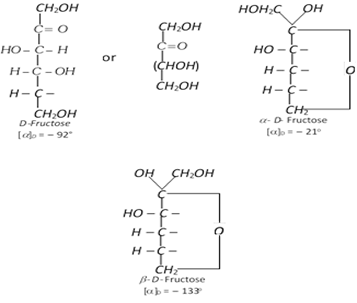 Comparison Of Fructose And Glucose In Brief

Comparison Of Fructose And sucrose In Brief

Some common uses of Fructose are: