Students can find the solutions of the Problems In General Physics I.E. Irodov - Polarization of Light on this page. A phenomenon caused due to the wave nature of electromagnetic radiation is known as Polarization in Physics. Students can expect one question from this topic for the entrance exams. Malus' law, Brewster's law, degree of polarization of light, Fresnel equations for the intensity of light reflected at the boundary between two dielectrics, natural and magnetic rotation of the plane of polarization etc, are the main points in this topic.

Students are recommended to go through these solutions so that they can be familiar with the type of questions from polarization of light.

1. A plane monochromatic wave of natural light with intensity I0 falls normally on a screen composed of two touching Polaroid half-planes. The principal direction of one Polaroid is parallel, and of the other perpendicular, to the boundary between them. What kind of diffraction pattern is formed behind the screen? What is the intensity of light behind the screen at the points of the plane perpendicular to the screen and passing through the boundary between the Polaroids?

2. A plane monochromatic wave of natural light with intensity Iofalls normally on an opaque screen with round hole corresponding to the first Fresnel zone for the observation point P. Find the intensity of light at the point P after the hole was covered with two identical Polaroids whose principal directions are mutually perpendicular and the boundary between them passes (a) along the diameter of the hole; (b) along the circumference of the circle limiting the first half of the Fresnel zone.

3. A beam of plane-polarized light falls on a polarizer which rotates about the axis of the ray with angular velocity ω = 21 rad/s. Find the energy of light passing through the polarizer per one revolution if the flux of energy of the incident ray is equal to ϕ0 = 4.0 mW.

4. A beam of natural light falls on a system of N = 6 Nicol prisms whose transmission planes are turned each through an angle φ = 300 with respect to that of the foregoing prism. What fraction of luminous flux passes through this system?

5. Natural light falls on a system of three identical in-line Polaroids, the principal direction of the middle Polaroid forming an angle φ = 600 with those of two other Polaroids. The maximum transmission coefficient of each Polaroid is equal to T = 0.81 when plane-polarized light falls on them. How many times will the intensity of the light decrease after its passing through the system?

6. The degree of polarization of partially polarized light is P = 0.25. Find the ratio of intensities of the polarized component of this light and the natural component.

7. A Nicol prism is placed in the way of partially polarized beam of light. When the prism is turned from the position of maximum transmission through an angle φ = 60°, the intensity of transmitted light decreased by a factor of η = 3.0. Find the degree of polarization of incident light.

8. Natural light falls at the Brewster angle on the surface of glass. Using the Fresnel equations, find

(a) the reflection coefficient;

(b) the degree of polarization of refracted light.

9. A plane beam of natural light with intensity l0 falls on the surface of water at the Brewster angle. A fraction ρ = 0.039 of luminous flux is reflected. Find the intensity of the refracted beam.

10. A beam of plane-polarized light falls on the surface of water at the Brewster angle. The polarization plane of the electric vector of the electromagnetic wave makes an angle φ = 450 with the incidence plane. Find the reflection coefficient.

11. A narrow beam of natural light falls on the surface of a thick transparent plane-parallel plate at the Brewster angle. As a result, a fraction ρ = 0.080 of luminous flux is reflected from its top surface. Find the degree of polarization of beams 1-4 (Fig. 5.31) 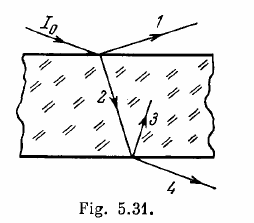 12. A narrow beam of light of intensity l0 falls on a plane parallel glass plate (Fig. 5.31) at the Brewster angle. Using the Fresnel equations, find:

(a) the intensity of the transmitted beam I4 if the oscillation plane of the incident plane-polarized light is perpendicular to the incidence plane;

(b) the degree of polarization of the transmitted light if the light falling on the plate is natural.

13. A narrow beam of natural light falls on a set of N thick plane parallel glass plates at the Brewster angle. Find:

(a) the degree P of polarization of the transmitted beam;

14. Using Huygens's principle, construct the wave fronts and the propagation directions of the ordinary and extraordinary rays in a positive uniaxial crystal whose optical axis (a) is perpendicular to the incidence plane and parallel to the crystal;

(b) lies in the incidence plane and is parallel to the surface of the crystal;

(c) lies in the incidence plane at an angle of 450 to the surface of the crystal, and light falls at right angles to the optical axis.

15. A narrow beam of natural light with wavelength λ = 589 nm falls normally on the surface of a Wollaston polarizing prism made of Iceland spar as shown in Fig. 5.32. The optical axes of the two parts of the prism are mutually perpendicular. Find the angle δ between the directions of the beams behind the prism if the angle θ is equal to 300. 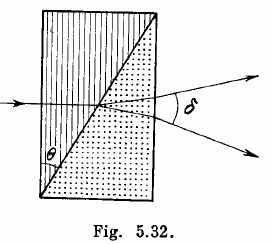 16. A quartz plate cut parallel to the optical axis is placed between two crossed Nicol prisms. The angle between the principal directions of the Nicol prisms and the plate is equal to 450. The thickness of the plate is d = 0.50 mm. At what wavelengths in the interval from 0.50 to 0.60 μm is the intensity of light which passed through that system independent of rotation of the rear prism? The difference of refractive indices for ordinary and extraordinary rays in that wavelength interval is assumed to be ∆n = 0.0090.

17. White natural light falls on a system of two crossed Nicol prisms having between them a quartz plate 1.50 mm thick, cut parallel to the optical axis. The axis of the plate forms an angle of 450 with the principal directions of the Nicol prisms. The light transmitted through that system was split into the spectrum. How many dark fringes will be observed in the wavelength interval from 0.55 to 0.66 μm? The difference of refractive indices for ordinary and extraordinary rays in that wavelength interval is assumed to be equal to 0.0090.

18. A crystalline plate cut parallel to its optical axis is 0.25 mm thick and serves as a quarter-wave plate for a wavelength λ = 530 nm. At what other wavelengths of visible spectrum will it also serve as a quarter-wave plate? The difference of refractive indices for extraordinary and ordinary rays is assumed to be constant and equal to ne - no = 0 .0090 at all wavelengths of the visible spectrum.

19. Light passes through a system of two crossed Nicol prisms between which a quartz plate cut at right angles to its optical axis is placed. Determine the minimum thickness of the plate which allows light of wavelength 436 nm to be completely cut off by the system and transmits half the light of wavelength 497 nm. The specific rotation constant of quartz for these wavelengths is equal to 41.5 and 31.1 angular degrees per mm respectively.

20. Plane-polarized light of wavelength 589 nm propagates along the axis of a cylindrical glass vessel filled with slightly turbid sugar solution of concentration 500 g/l. Viewing from the side, one can see a system of helical fringes, with 50 cm between neighbouring dark fringes along the axis. Explain the emergence of the fringes and determine the specific rotation constant of the solution.