Before we dive into the intricacies of isomerism, let’s take a look at what isomerism is. Say you have 5 beads that you need to make a necklace out of, three red and two blue. You can arrange these beads in any way you want to. You can place three red and then two blues or you can also put two reds then one blue and then two reds and then one blue. They are made of the same constituents and yet they are different. Isomers are exactly this. Isomers are molecules with the same chemical formulae but with a different chemical structure. Isomers are molecules that have the same molecular formula but have a different arrangement of the atoms in space.

This means a different arrangement entirely and not just a changed orientation or the slight rotation of the constituents of the molecules. Isomers do not necessarily share similar properties unless they also have the same functional groups in the case of isomerism in organic chemistry. Isomerism is most widely observed in organic chemistry and has a huge application in chemistry and medicine. Let’s take a look at one specific group of isomerism; Structural Isomerism. 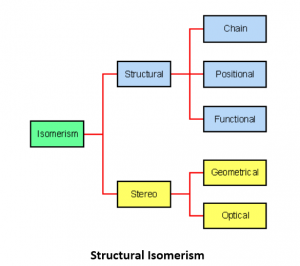 Chain isomerism is observed when the carbon molecules in the chain of an organic molecule are relocated which alters the chain of the organic compound. The images below show an example of chain isomerism. The first row represents the chemical, pictorial and formula representation of n-butane, whereas the second row represents that of isobutane. As you can see, they are both made of the same number of carbon and hydrogen atoms but the chain of carbon molecules is altered due to the attachment of the carbon molecule at a different point. The number of possible structural isomers increases greatly with the number of available atoms. There are only two butanes, but there are three pentanes (C5H12), 18 octanes (C8H18), and so on.

Organic molecules usually have functional groups attached at the terminals such as halogen atoms, hydroxyl atoms etc. The relocation of these functional groups between two identical organic compounds gives rise to Positional Isomerism. A simple example of this type of isomerism would be,

In functional isomerism, the same sets of atoms are re-arranged in such a way that the two functional isomers have significantly different properties from each other due to their containing different functional groups. This means that they belong to different families of compounds. To understand this better, let’s recall the Propanolmolecule.

Although both the molecules contain the same constituents, the second organic compound has a completely different arrangement of the atoms. More importantly, the oxygen here is connected to two carbons instead of hydrogen and a carbon which makes it an ether, not an alcohol like the first compound.   In this article, we learned about isomerism, isomers and the various types of structural isomerism such as chain isomerism, positional isomerism, and functional isomerism. To learn more, please log on to Byju’s.com. Join us and fall in love with learning.