JEE Main previous year questions with solutions on topic centre of mass are available here. Practising JEE Main Previous Year Papers Questions of Physics will help all the JEE aspirants in understanding the question pattern as well as help in analyzing their weak & strong areas.

Q1: Two blocks of masses 10 kg and 4 kg are con­nected by a spring of negligible mass and placed on a frictionless horizontal surface. An impulse gives a velocity of 14 m/s to the heavier block in the direction of the lighter block. The velocity of the centre of mass is

Q2: A 20g bullet pierces through a plate of mass M1=1kg and then comes to rest inside the second plate of mass M2 = 2.98 kg, as shown in the figure. It is found that the two plates initially at rest, now move with equal velocities. Find the percentage loss in the initial velocity of the bullet when it is between M1 and M2. Neglect any loss of material of the plates due to the action of a bullet

Let the initial velocity of the bullet = V1 m/s

The velocity with which each plate moves = V2 m/s

Q3: Two particles A and B, initially at rest, move to­wards each other under the mutual force of attraction. At the instant when the speed of A is v and the speed of B is 2v, the speed of the centre of mass of the system is

FA is the force on particle A

FB is the force on particle B

For the centre of mass of the system

Q4: Two small particles of equal masses start moving in opposite directions from a point A in a horizontal circular orbit. Their tangential velocities are v and 2v, respectively, as shown in the figure. Between collisions, the particles move with constant speeds. After making how many elastic collisions, other than that at A, will these two particles again reach the point A? 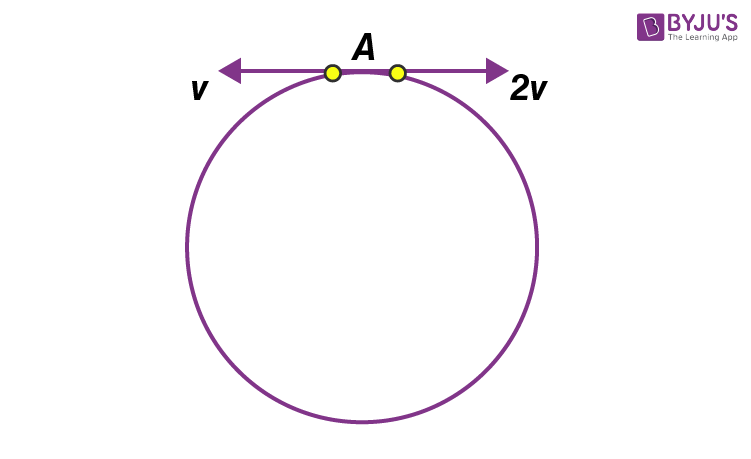 Let L be the circumference of the circle

They will first meet at point B travelling L and 2L distance.

So the next collision will happen at point D travelling 2L distance and L distance.

Again the velocity will get interchanged and they will collide at point A again.

So total it will be 2 collisions before they collide again at point A.

Q5: A point mass of 1 kg collides elastically with a stationary point mass of 5 kg. After their collision, the 1 kg mass reverses its direction and moves with a speed of 2 ms4. Which of the following statements(s) are correct for the system of these two masses?

From the conservation of linear momentum

Since the collision is elastic, total kinetic energy will be equal

The velocity of the centres of mass of the combined system

The combined Kinetic Energy of the system

Total momentum of the system

Q6: A circular plate of uniform thickness has a diameter of 56cm. A circular portion of diameter 42cm is removed from one edge of the plate as shown in the figure. Find the position of the centre of mass of the remaining portion 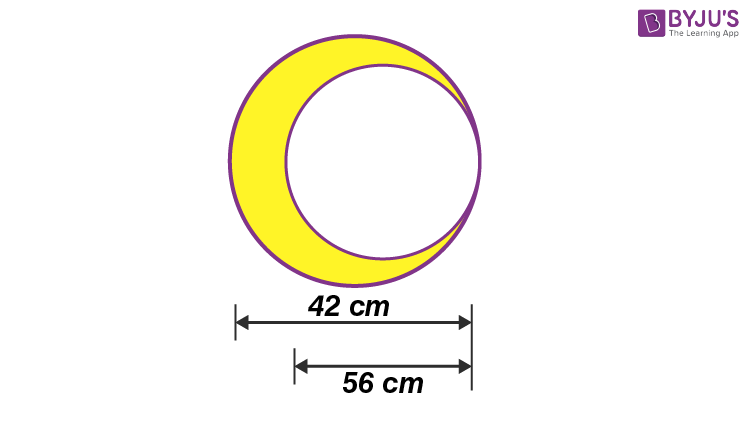 M is the mass of the original disc

M1 is the mass of the removed disc

If mass per unit area is m then,

centre of mass position of the original disc = 0 (at origin)

centre of mass of the remaining part= r2

Answer: 9 cm to the left of the bigger circle 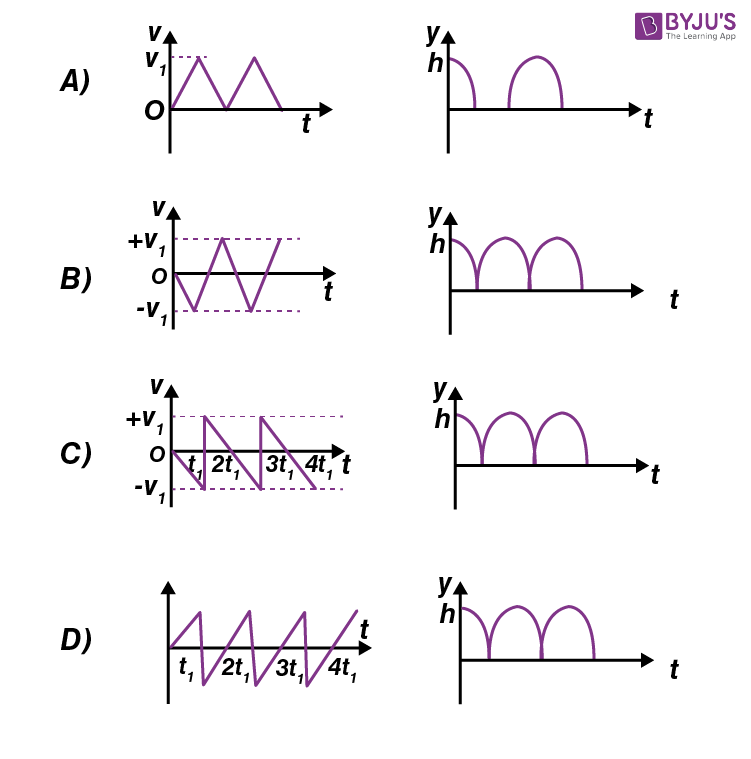 Q8: Statement-1: Two particles moving in the same direction do not lose all their energy in a completely inelastic collision.

Statement-2: Principle of conservation of momentum holds true for all kinds of collisions.

As p1 and p2 both cannot be zero simultaneously therefore total kinetic energy cannot be lost. 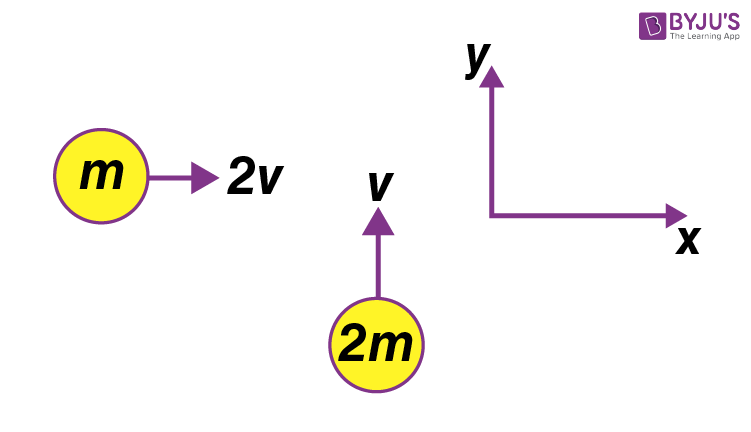 Conservation of linear momentum in the x-direction

Conservation of linear momentum in y-direction

The initial kinetic energy of the two particles system is

Final energy of the combined two particles system is

Percentage loss in the energy during the collision

Q10: The distance of the centre of mass of a solid uniform cone from its vertex is Z0. If the radius of its base is R and its height is h then Z0 is equal to

Q12: In a collinear collision, a particle with an initial speed V0 strikes a stationary particle of the same mass. If the final total kinetic energy is 50% greater than the original kinetic energy, the magnitude of the relative velocity between the two particles, after the collision, is

Q13: Two blocks A and B, each of mass m, are connected by a massless spring of natural length L and spring constant K. The blocks are initially resting on a smooth horizontal floor with the spring at its natural length, as shown in the figure. A third identical block C, also of mass m, moves on the floor with a speed v along the line joining A and B and collides elastically with A. Then

(a) The KE of the AB system at maximum compression of the spring is zero.

(c) The maximum compression of the spring is

(d) The maximum compression of the spring is

There is an elastic collision between C and A

In an elastic collision, the velocities are exchanged if masses are the same.

∴ after the collision;

Now the maximum compression will occur when both the masses A and B move with the same velocity.

And at the time of maximum compression.

Answer: (d) The maximum compression of the spring is

Q14: Look at the drawing given in the figure which has been drawn with the ink of uniform line-thickness. The mass of ink used to draw each of the two inner circles, and each of the two-line segments is m. The mass of the ink used to draw the outer circle is 6m. The coordinates of the centres of the different parts are; outer circle (0,0), left inner circle (-a, a), right inner circle (a, a), vertical line (0, 0) and horizontal line (0, -a). The y-coordinate of the centre of mass of the ink in this drawing is 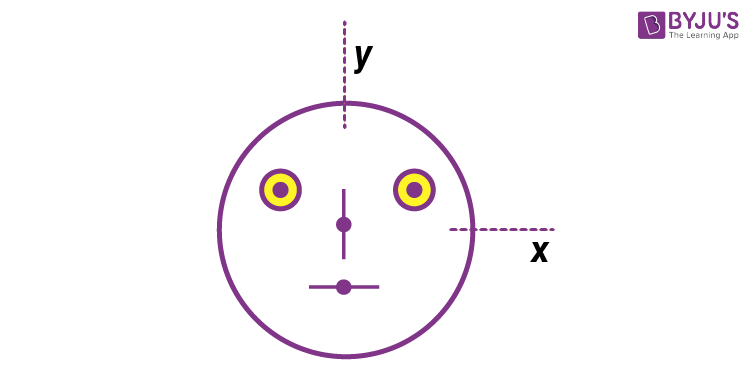