Linear algebra is a subject of great breadth. Its spectrum ranges from the abstract through numerical techniques to applications. Linear algebra is used in many various fields such as fractal geometry, differential equations, difference equations, relativity, archaeology, demography and many more. In daily life, we come across various situations where we need to frame the problems into equations to solve them.

What is Linear Equation in Maths?

The statements of equality of two algebraic expressions involving one or more variables is known as equation. An equation in which the highest power of the variable is one is known as linear equation.

Mathematically: An algebraic equation that can be written in the form ax + b = 0 or ax + by + c = 0, where a, b and c are real numbers and x and y are variables with highest power one.

Standard Form of a Linear Equation 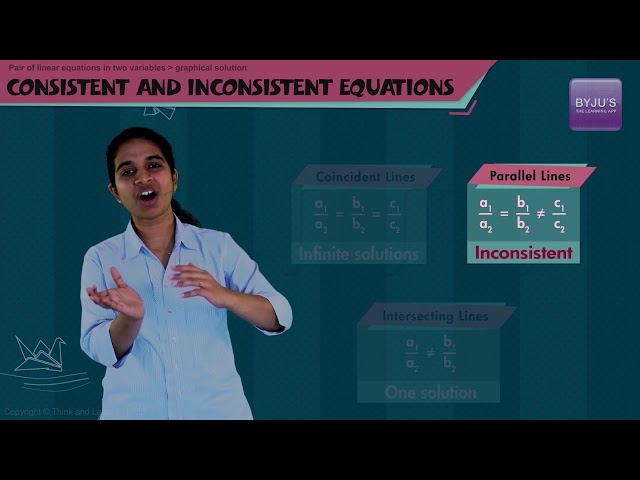 Linear equations can be used to solve any arithmetic equations and determine the exact value/root of the variable which satisfies the equation.

Solving Linear equation in one variable

Before we start solving linear equations having two variables, advised to check the type of solution, whether consistent or inconsistent. Follow below chart to check the same.

Divide each side by 3, we get

Substituting x = 5 in the given equation.

Isolate equation (i) for x

Substituting the value of x in (ii)

Now, find the value of x

One helpful approach when solving any algebraic word problem is to translate the word problem into an equation then solve the equation. Let us solve some of the problems to understand the concept.

As per given data,

We have two equations:

Solving the above equations and finding the values of x and y.

Substituting the value of x in (i)

Therefore, Sudheer is 34 years old and Arshad is 12 years old. Using the above formula, we have